The Island of Fire: Mindanao’s Camiguin

Mindanao, formerly the Sultanate of Sulu and the 19th largest island in the world, is a southern province of the Philippines replete with jaw-dropping geological wonders like Mount Apo and some of the nicest beaches in the Philippines. Unfortunately, it is also known for the rustling of its political discontent, and a rash of kidnappings, bombings and general disorder have occurred in recent years, with the kidnapping of two red cross workers making headlines only last week. Despite this, I went to visit one of its islands, the beautiful Camiguin.

Mindanao is currently divided between the predominately Christian north (including Cagayan de Oro, Surigao and Camiguin island), the moderate middle swath of the island and those parts of the southwest of the province which have separated into an autonomous region called the Autonomous Region in Muslim Mindanao (ARMM) as of 1989. Though North and East of Cagayan de Oro is perfectly safe, many tourists have opted to skip Mindanao altogether due to the consistency of the tumult in the Southwest of the province. Massive protests and a recent return to headline-grabbing violence have led to a resurgence in hostilities, with some of the groups seeking independence from the Philippines unhappy with the ARMM arrangements and calling for more autonomy. Amongst those groups, the 14,000 strong Moro Islamic Liberation Front (unfortunately abbreviated as “MILF”, which led Craig to joke that some “sexy moms were causing havoc down south”) has been the most active and has opted not to join the ARMM, as well as the precision-trained, profit-seeking Abu Sayyaf group, notorious for high-level, brutal kidnappings and beheadings, including a 2001 kidnapping from Palawan and a 2004 ferry bombing of the SuperFerry 14 that killed over 100 people.

Despite the fact that my health insurance stopped coverage the second I hit Mindanao (since it is on Canada’s ‘do not go there please’ travel list) and the fact that Cale, who is working FOR Canada, might get a serious talking to upon his return, we decided to take fellow travelers’ advice to heart (Camiguin is gorgeous! You will love it! It is safe!) and head to Camiguin anyhow.

Camiguin has the distinction of being the island with the most volcanoes per square metre of any island on earth. It also has more volcanoes (7) than towns (5). Its terrain alternates between the moist, green jungle and black sand, with the looming mountains in between the two. Cale and I were joined by Sean and Jessica, a couple from England. We arrived late at night and took a tricycle (in Tagalog, a habal-habal, literally translated as ‘pigs copulating’ because of how intimately you will get to know someone if you share one with them) to Jasmine on the Sea, a family-run resort on a stretch of black sand beach. Given that there was only one room left, we dragged an extra mattress in and bunked down as a foursome for the week, cutting down on accommodation costs. Cale’s priority was trying his hand at scuba diving, and ended up taking a Discover Scuba course with Jess at Funky Divers, a diving shop run by the extraordinarily eccentric Hans, the Austrian owner. His divemaster Romeo took Cale under his wing, and my brother was able to do a full four dives in his brief time there.

During our week on Camiguin, we managed to do a fair bit of exploring – we rented motorbikes and did a full circumference of the island, visiting the Ardent Hot Springs in the foothills of the Hibok-Hibok volcano and the Soda Springs near the Station of the Cross volcano, which were neither spring-y nor soda-y. We motored to the Katibawasan Falls, accessible by tiny dirt road that forked off from the main part of the island in a tapestry of flowers, water buffalo and crowing roosters. We climbed to the top of the Station of the Cross to watch the sun setting into the water far below, only to watch dark, dense clouds waft toward us from the back of the volcano. With one eye on the sun and the other on the quickly approaching storm, we stuck our ground and were chased off the mountain by the pelting rain. We took memorable boat trips to White Island, a partially submerged white sand bank a stone’s throw from Camiguin’s shores, where Cale went diving and I was befriended by 2 dozen lovely Filipino children who had a million questions about Canada and why I had no husband, and to Mantique Island, a wild nob of sand and tropical plants several hours from Camiguin, toward mainland Mindanao.

The Mantique Island trip started out extraordinarily well: we left Camiguin early, arrived to the island paradise a few hours later and were able to snorkel or dive to our hearts content, feasting on a lunch of fresh clam soup and rice (I mean FRESH – the fisherman asked how many kilos, we told him and then watched him saunter out to the water’s edge and casually pluck our lunch out of his fishing net). By afternoon, our plan to be back by 4 was derailed. We didn’t leave the island until well past then, and the sea was disturbingly rough. Cale and I were on separate boats, and with the sun setting fast, and my watching Cale’s boat floating farther and farther away and then disappearing into the horizon, I finally made our boat driver turn back to find out where he had gone. It turned out that their boat engine’s had died and they were out of cell phone range and, by the time we arrived, they had been drifting aimlessly in the waves for a good hour. We tied the two boats together and swam to shore and took a tricycle back to Seascape.

After a week of outdoor fun and adventure on Camiguin, Cale to the boat to Cagayan de Oro so he could make his (long) way home – via Oz – and Sean, Jessica and I took a ferry to Negros Island’s capital city, Dumaguete. 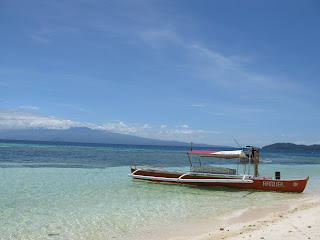 Cale and I at Katibawasan falls; sunset over the main road near Mambajao: 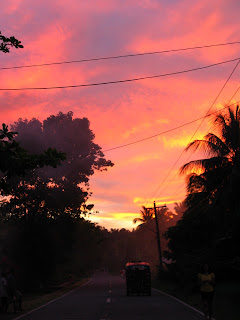 Next up: To the remote Sipalay – and by “remote” I mean “impossible to get to”.