After almost 2 weeks of train travel through Russia’s cities and Siberia’s wilderness, I’m at a loss about where to start this wrap up. Given that I’m off again this evening (overnight train to Ulan-Ude, Siberia) I’ll do a bullet point wrap up for each place we’ve visited, and the trains as a whole.

Suffice it to say that as a newcomer to overnight train travel, I’m a wholehearted convert. The overnight trips – be they 2 or 3 or 4 nights – go by in a flash, with days spent reading and chatting with other passengers or just watching the scenery change and nights spent drinking vodka with bunk mates or newfound friends in the dining car.

Though I’m a restless traveler (just as my parents – car trips with me as a child? NOT FUN!), I found myself lulled into a state of complete relaxation on the trains.

I’m looking forward to tonight’s train ride, though the next one includes a midnight border run (into Mongolia) that I’ve been told by intrepid travelers coming the other way takes at least 8 hours. And you can’t pee while they are in the station, so your options are get off the train for 8 hours and freeze outside – but you can pee! Or, stay on the train and make sure no one stuffs renegade merchandise that they’re smuggling into the next country (the stories we’ve heard about people going into their cabins post-border to find pants stuffed under their mattresses, in their cupboards, under their seats, etc. are hilarious) – but no peeing for 8 hours. Will be interesting. I’ll let you know what I choose.

With only a few days in Moscow and Red Square closed to the public for Moscow Day, we made the most of our brief time there by wandering the city and taking a boat ride along the river that winds its way through Russia’s capital. Some random observations:

– Nobody smiles. This can be extrapolated to Russia as a whole – NOBODY SMILES. Walking around here as a cheerful Canadian is a lesson in rejection: you smile at someone because you’re polite and you may or may not have crashed into them while taking a photo and they just … stare at you. No one smiles walking around the street, in trains, in buildings. It’s just not part of the national psyche. That’s not to say that once you actually get to know someone they’re not the epitome of gracious and kind – it’s just that as first impressions go, Moscovites leave you shivering. Anna, my guide in Ekaterinburg, told me that Russians think only crazy people smile. She once asked her mother why she didn’t show her teeth more and the response was “what, do you think I’m insane?”. Well, that answers that. Anna also wanted to know why North Americans were so expressive when they spoke. I hadn’t thought of myself as tremendously expressive, but perhaps in contrast to the stoicism of Russia, I do come across as more than a little excitable!

– Slogan of the city, as appointed by yours truly: “Business in the front, party in the back.” This slogan not only applies to the severe nature of Moscow’s populace, but also the fact that IT IS A CITY OF MULLETS. Men, women, children – mullets for all. The sheer audacity of the mulletization is definitely striking; Bryce and I started counting but lost track almost immediately. So, for those of you thinking of moving to Moscow: start growing.

– Bryce and I went for drinks with Olga, a friend of my friend Chris in NY, and were able to hear firsthand what it was like to grow up in Russia pre-dissolution of the USSR (she is in her 30s). She brought us to a lovely cafe tucked away between buildings (that we would have never found on our own) and gave us a different view of the city we just walked from head to toe.

– The city itself was much larger than I had anticipated, and the range of architecture extreme. It is hard to believe so much of the churches and older buildings were destroyed by Stalin; one can only dream of the tapestry that the full breadth of the city’s architecture could weave. I suppose it’s like this with most cities: be it fire or flood or someone with a strong opinion, most of what was once built has been destroyed.

GUM shopping mall in all its beauty: 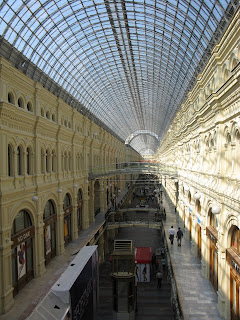 Moscow at night, pre “Moscow-day”; the Kremlin from the river: 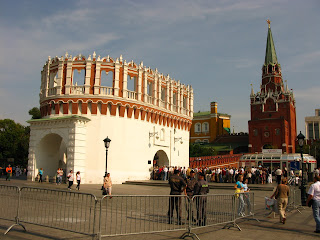 – The city is about 280 years old, and is mostly known for the death of the House of Romanov in 1918. It is very pretty, but quite small in comparison to Moscow.

– Our time here included a full day hiking trip in the Ural mountains and a side trip to the Europe-Asia border.

– Many of the cars here are imported, 2ndhand, from Japan. Meaning: they are steered with the driver on the righthand side….and driving on the righthand side of the road. Understandably, there are numerous accidents, since people are quick to drive recklessly and can’t remotely see what’s headed toward them in the other direction when they are driving on the other side of the street. Both our drivers to and from the Urals were driving on the right side. Bryce, in the front seat, was the designated “yell if a car is coming since I’m going to pass the car in front of us anyhow” guy.

– Anna, my tour guide, was 20 years old and her view as a child growing up in post-Soviet Russia was an interesting contrast to Olga and my mid-50s walking tour guide in Moscow. Understandably, three very different perspectives.

Me in the Ural mountains; Ekaterinburg’s Church of Spilled Blood: 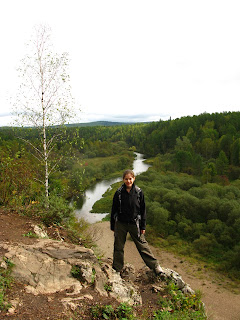 As most of you know from my prior posts, I was extremely excited to get to Lake Baikal. Though we only spent 3 days there in the lakeside village of Listvyanka, those few days did not disappoint.

– Baikal, holding 20% of the world’s freshwater and with 80% of its organisms found nowhere else on earth, is a wonder to behold. It’s HUGE, and deep – and the water is extremely transparent. Once the ice freezes in the winter, you can drive across the lake to the North side, looking down a terrifying 60m. It must feel like you are driving on air!

– There are 70,000 Nerpa seals in the lake – the world’s only freshwater seal. We didn’t see any but they had one in an aquarium and it is by far the fattest seal I’ve ever seen. Check out my pictures – I”m not kidding.

– We stayed in a homestay, with a lovely couple from Uzbekistan (her) and Kazakhstan (him). They spoke no English whatsoever, but made fantastic meals of meat and potatoes (and lots of dill!) with pancakes every day for breakfast. They gave great goodbye hugs. They have two kids who helped them with the cooking and cleaning and it was an absolute pleasure to stay with them. We were one of the few houses with a toilet inside the house, and an actual shower instead of just a Banya (a Siberian sauna).

Bryce and I on Lake Baikal; Listvyanka in the afternoon: 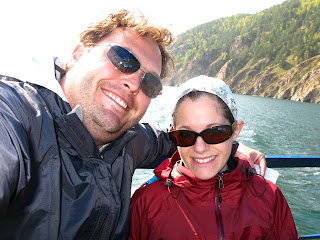 – While not the “Vodka Train”I anticipated, there is plenty of drink to be had on the Trans-Siberian Trains. Every stop on the route has beer for sale at the side of the tracks, and in 2 litre screw top bottles no less. Vodka did run freely, and Bryce stayed up till 7am drinking with our bunk mates. I made my way on several occasions through the cars to the dining car, where vodka flowed and most of the 20-30 and 40 somethings came to eat and drink. My 2nd night bunk mates were a lively, vivacious couple from Scotland and they too made it to the dining car into the wee hours of the morning.

– Every carriage has an attendant and not one of them speak English. Trying to ask for a spoon is hilarious enough, trying to ask about where to plug in my phone? Almost impossible. Luckily, I stumbled upon a group of 17 French tourists, one of whom was fluent in Russian, and was able to get some free translation services. The French were also helpful at random train stops – when the women walked through the car yelling out what treats or stuffed pancakes they had for sale, I was able to get a quick translation.

– At first, the trains were nauseatingly rough, with lateral movement much like that bus ride Cusco to Ica. Going between cars was equally daunting – the thrashing, gnashing metal plates between them weren’t stable ground for someone who was already a bit “train sick.” Soon enough, though, I got my train legs and found the trains relaxing and entertaining. Time passed quickly and I was sad whenever we ended up at our destination, looking forward to the next overnight on the Trans-Siberian line.

Me and Potato and “Hattie”, mascot for Andrew and Christine: 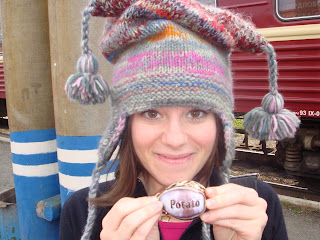 Me and the two tallest men on the train; The dining on the Ekaterinburg to Irkutsk train: 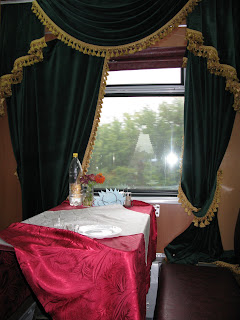 That’s it for now – I’m late for my train to Ulan-Ude. Apologies for the disjointed nature of this post but I really wanted to get my thoughts on paper before I left for Siberia. I can’t believe I can even say that. I AM LEAVING FOR SIBERIA. No complaints here.