My dad, a man of considerable gravitas who believes in systems and traditions, has long predicted the coming year based on the shape and style of our family’s Christmas tree. If the tree is straight and full, it will be a year of bounty and promise. If the tree is crooked, watch out. Several years ago, the tree fell over and my father was aghast; sure enough the year was one of the worst the family had in decades, thereby fuelling his even-more-careful analysis of our tree going forward.

The reason our tree fortune is left to chance is that one selects Christmas trees not based on what they look like in the wild, but rather how they feel and seem while rolled up into a tube, curled into a protective cover of meshed wire. So in selecting the tree, you don’t actually know what you are getting. You just hope it is a straight tree, and that it doesn’t fall over again.

This year’s Christmas tree was a beauty. Standing tall, it unfurled its branches delicately, fanning out in the corner of the living room. Other than the fact that the cat seemed to enjoy drinking the water from its base — perhaps it tasted better? — it was left alone, perfuming the house with the pine smell I miss most while traveling. While sitting on the floor with my brother midway through my trip, my dad stepped into the room with a satisfied grin. “This year’s tree is perfect guys. We did good.”

Whether the tree’s fortune proves true remains to be seen, but our trip home — the first Christmas with us siblings together in quite a few years — was an experience to remember. With a big ice storm that blanketed the province just prior to my brother’s arrival, we were delayed by a day and made it up to my dad’s on his 3rd day without power. Joining us was my brother’s girlfriend Sarah, part of our lives for several years but so seamlessly integrated that I cannot imagine life without her. And for his first time in Canada, my brother’s friend Jason, who not only got to spend his holiday in the snow, but had a quintessentially American enthusiasm for the quaint “Canadianness” of it all.

We laughed, we cried, we built really dirty snowmen.

How Canadian a Christmas was it?

In vaguely chronological order, let me count the ways Christmas in Canada took the cake.

1. Ice storms: extremely dangerous, devastating to the flora and fauna but gorgeous to see. This taken on the drive to my dad’s, with the trees encased in ice and glowing in the late afternoon light. Stunning.

2. Leaving the car at the bottom of my dad’s driveway, we took an ATV up to the top. The scenery? Beautiful.  The resulting convoy of people, things and motoring up an icy hill? Priceless.

3. While waiting for the power to come on, we played snow games, made even more fun by smartphone technology that captured them in bursts.

4. When the neighbours called to say that Hydro-Quebec (our provincial electrical company) was at the bottom of the hill, my dad sent my brother and I down on the ATV to go see what was going on. What started as a reconnaissance mission ended up as an hour of my brother ferrying people up and down, and my entertaining the linemen left at the top of the hill, until all were reunited at the top and power was restored on Christmas Eve. After four days of no showers and headlamps, my dad was a happy camper.

7. EGG IN THE HOLE! For those of you not from Montreal, you don’t eat bagels. What you think are bagels are actually just rolls with holes in them.

You can argue with me, but though I have been diagnosed with celiac disease it wasn’t always this way. And I tried a lot of bagels before said diagnosis. Our bagels are the best in the world. And they are even better with eggs cracked into them, and topped with sharp cheddar cheese. My brother’s breakfast masterpiece above. (I got a piece of gluten-free bread with a hole cut out for my version of this. It was a paltry substitute, but better than nothing.)

8. My brother’s gift from “Father Christmas” — Santa outfits for us all. And a reindeer costume for Sarah.

11. We tobogganed TO A PARTY.  While we impressed upon Jason that this wasn’t done as a matter of course, it was still a highlight for all of us. Sarah and I went first, waiting at the bottom as we heard the boys laughing the length of the hill, arriving panting and cackling wildly. We parked the toboggans, peeled off our snowpants when we got to the party to reveal respectable outfits underneath, then enjoyed some wine and snacks like civilized adults. Headlamps on, toboggans in tow, we wound our way back up the hill after the party ended, still smiling.

12. As I alluded to earlier, we built dirty snowmen — snowmen that we thought were extremely funny, but that also got me reported on Instagram for inappropriateness. I would argue — and did — that the copious half-nekked cheerleader selfies from minors are actually far more insidious to the childrens than two snowmen going at it. Plus unlike Twitter, Instagram is not fully public — and I made sure not to hashtag my photo so it wouldn’t be easily found. That said, as there are kids who read the site, I haven’t embedded the image. The snowmen are here.

13. Those of you who know me well know that I went to South America because I loved llamas and alpacas and all other camelids. (I also love tarsiers, which is why I went to the Philippines. Traveling for furry animals is the norm for me, apparently.)  Given that my brother was driving back to Montreal to visit my mum, I decided to surprise her by joining, instead of staying at my dad’s. On the drive back to the city, I also made enough of a ruckus in the car that he stopped at this alpaca farm outside of Sutton, Quebec. Best. Idea. Ever.

14. After dropping Jason off at the Montreal airport, my brother and I were randomly filmed by a CBC television crew about the airport’s new security app. We neglected to tell my father this, so while he was eating dinner with friends, he was shocked to see the two of us on the evening news, despite knowing we weren’t actually going anywhere that day. “You two — how did you get on TV? You weren’t even leaving on a plane!” The clips of us using our phones and of Cale and I each being interviewed both made the news.

15. And, the icing on the cake: I hid in a duffel bag to surprise my mother. She thought she wouldn’t see me until the summer when I return to North America, so I stuffed myself into Cale’s bag and we put — what else? — a hockey jersey on top of it, asking her to pick it up once she entered the house. Cue a lot of screaming, swearing and then fierce hugs. I have video, but I promised my mother I wouldn’t post it.

The summary of Christmas in Canada? Awesome.

All in all, despite the 48-hours it took to return to Canada, it was immediately worth it once I saw my family. When I talk about choices I’ve made that took me to far away places, I reiterate that I include family time, because it doesn’t feel right to spend a full year away from them. While I’d prefer the usual summer  visits (brrrrr) the sheer novelty of (and shenanigans in) the ice and snow, missing from the last few years, numbed the frostbite considerably.

I booked my return to JFK on my dad’s birthday since he was flying that day anyhow, and managed to convince the pilot to announce his birthday and have the flight clap for him. Sitting a few rows ahead (with Zachary the cat) he whipped his head back to my row where I was waving at him, glaring at me with a mixture of love and exasperation.

Inherent in this life I’ve built is an uncertainty about what comes next, which is buffered nicely by these visits to Canada with family.  As kids, my dad used to say that he wanted us to go out and change the world, making it better because we lived in it. As adults, he ruefully footnoted this advice with an additional observation: that he forgot to put a geographic limitation on where we decided to live. Of course the beauty of what I do is that I can visit for longer periods of time, without the short bursts of family time that were punctuated by calls to work when I was a lawyer, and of far less quality than they are now. I wake up grateful not only for this life I’ve been able to build but also the ability to reshuffle things as needed, to make time for people who need time, and to close my computer for a few weeks of hugs, Cards against Humanity, dirty snowmen, power failures, and a very Canadian Christmas.

Currently back in Saigon after sitting in the plane while it was de-iced for 2.5 hours, the last flight out of JFK (or so we were told) before they shut the runway in the snow. I’ve just started my Jodi Eats food walks — yesterday was the first one, yay! — and so far have over a dozen booked for January. Those who signed up are all readers, meaning that there’s a familiarity different from more formal tours, which was my hope. Of course I’d welcome others, but it’s great to meet people I’ve corresponded with at length, and do so over great food.

The tours are not just about food. They also put into practice the philosophy I’ve espoused here and in my book, that the best way to learn about a place and its history is through the food you eat while you are there. I’ve tried to include dishes from the whole country, all the while diving into where they came from and how they were influenced by the movement of people. I’ve had a lot of fun thus far, and hope you will too. 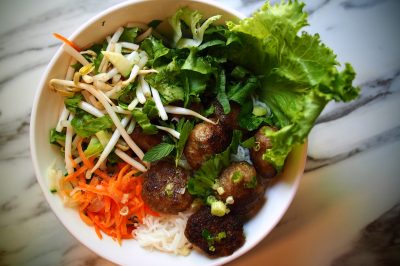 Love and Lattes in Montreal

Essaouira, Morocco:
A City of Colours and Contrasts 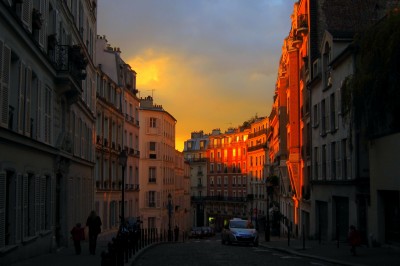 An Afternoon in Paris’ Montmartre