Back in April, my 2nd anniversary of departure rapidly approaching, I wrote a post about why I quit to travel around the world. And in it I shared a moment of immeasurable, overwhelming happiness, content in the knowledge that my years of working hard to meet a goal were well worth it. That the goal was met, that it exceeded expectations. That I was eating my way through Southeast Asia.

That moment happened as I was on the descent from Mount Zwegabin, and while the comedy of being chased up the hill by monkeys was an important part, there were several other components worth sharing. The first is one I will write about later on: I climbed Zwegabin after deciding to spend a week in Hpa-an. And I decided to stay in Hpa-an because part of the town went up in flames on my first night there, and I felt an attachment to the place as a result. In addition, one of the brothers who ran Soe Brothers Guesthouse (Mr. Soe) had become a bit of a friend during my stay. He loved that I wore a longyi; he thought it was hilarious that I was “small, so so small” compared to other tourists. He even asked if my mother fed me properly as a child – how else to explain my height compared to the towering Germans staying there at the same time?

On my third day in town, I asked if I could sleep atop any of the mountains and he suggested Zwegabin. 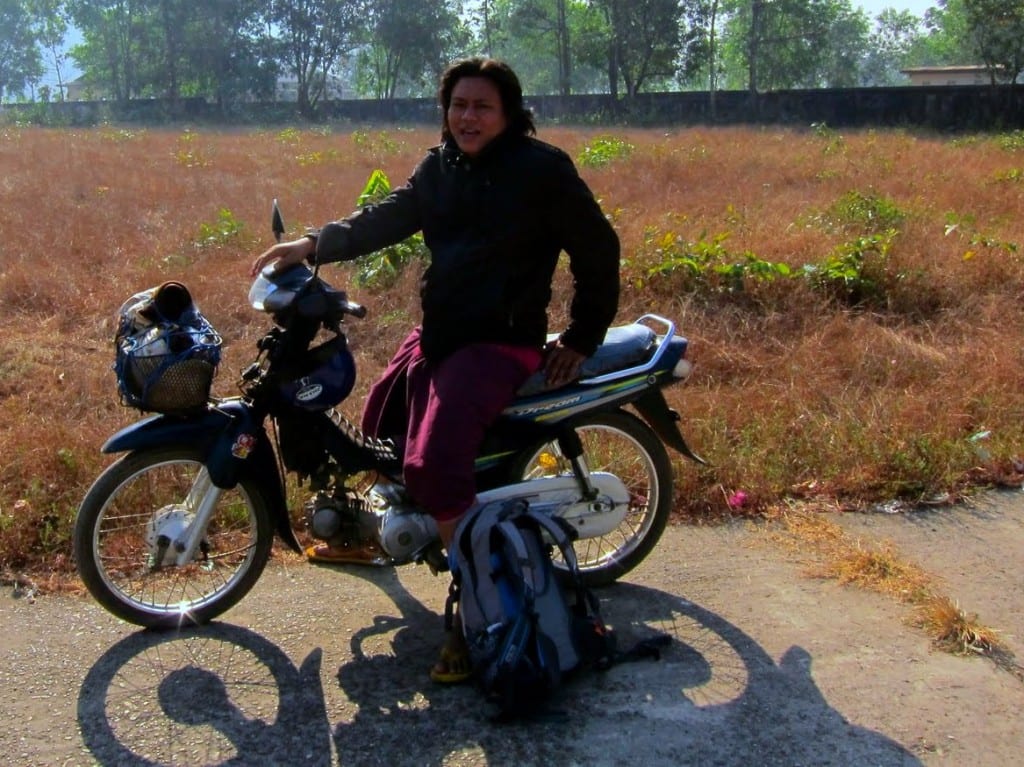 Mr. Soe, his motorbike and my backpack (aka Monkey Bait).

There are two ways to climb Mount Zwegabin: from the east or the west. I choose the west side because the base of the mountain has Buddhas as far as the eye can see, row after row. Over 1100 of them, some tangled in the trees and others facing the gates on full alert. It seemed an ideal start to a climb where I would be sleeping in a monastery at the summit, and I planned to descent via the east gate to see the other trail. 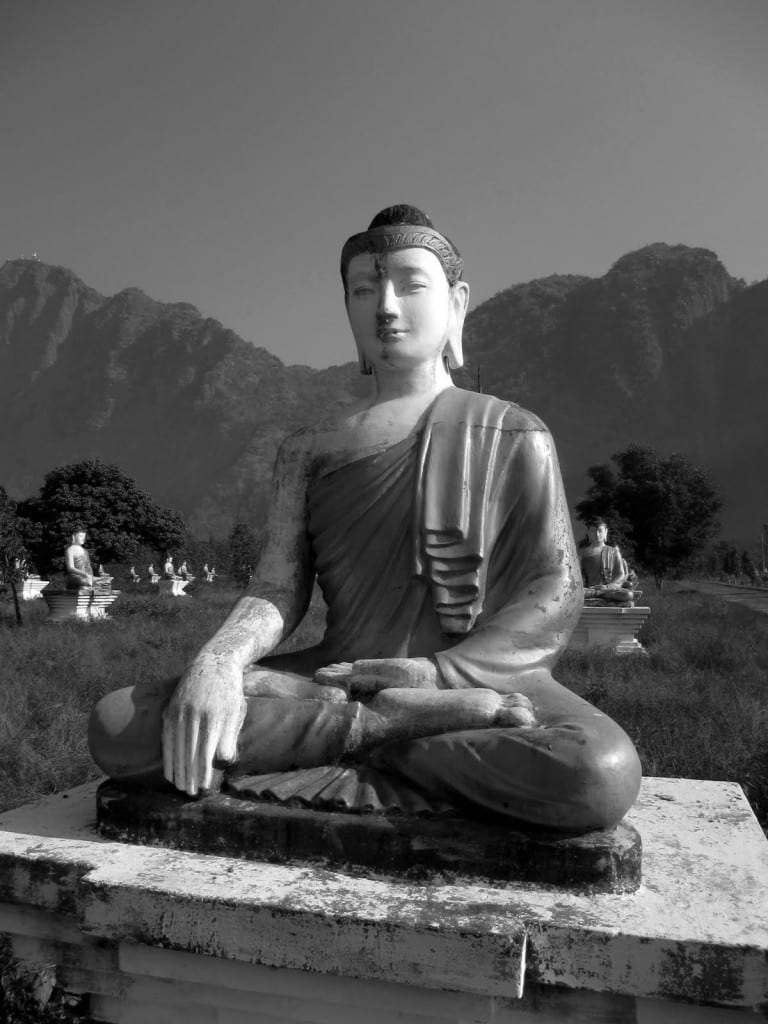 Before I could start up the concrete steps, a group of young women and men dressed in traditional Kayin longyis came running over. A high-ranking general from the army was supposed to come by and they were dutifully waiting for the photo op. Since he had skipped his welcome committee, would I be interested in a photo? An easy answer to that question: 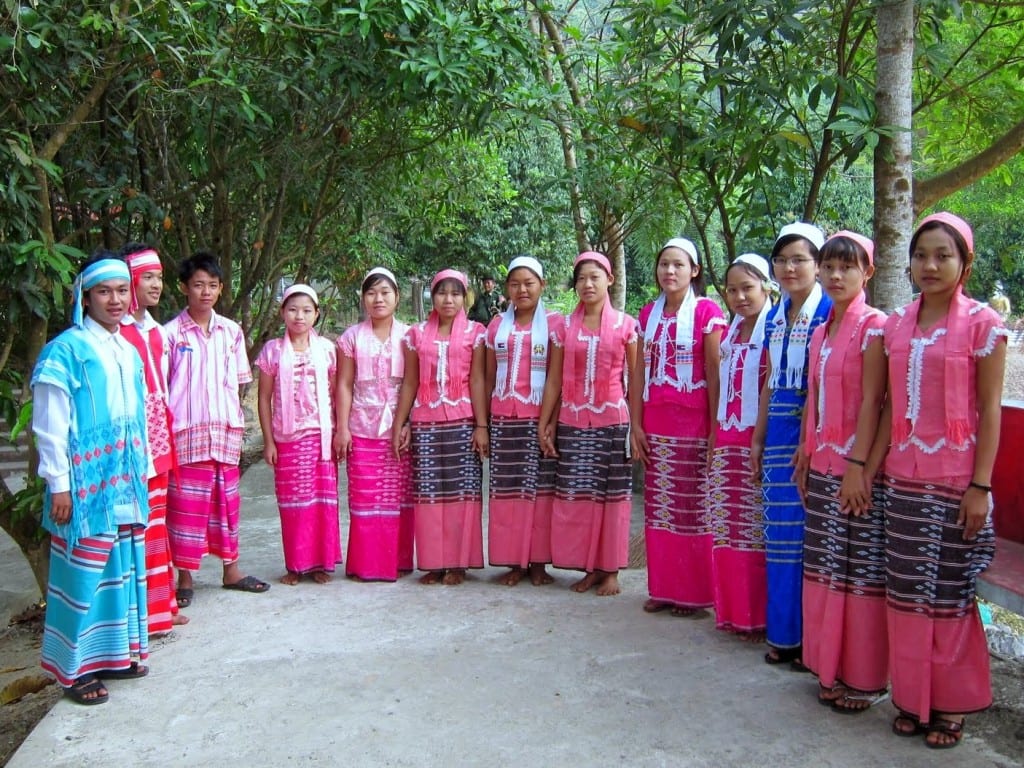 From that point on, it was a monkeyfest. I don’t know that I want to get into specifics, but let’s just say I’m not terribly proud of yelling at a bunch of primates and/or running up a hill away from them. Nor was it the most gratifying to watch half a dozen monks cry with laughter because the monkeys were chasing me on the grounds of their holy prayer space.

Once I was given a space to sleep in the prayer room, everything was worthwhile. With the shutters drawn and the thick darkness of the prayer room enveloping me, I slept deeply and calmly, waking at dawn to the sounds of monkeys on the roof. 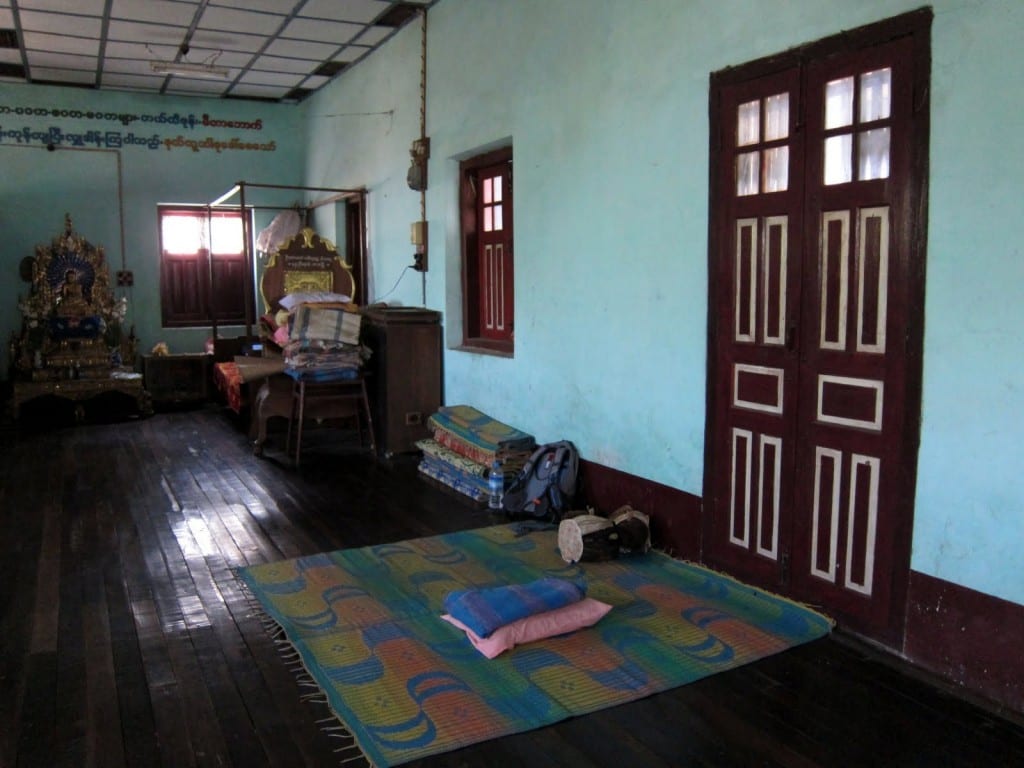 The afternoon was spent chatting with the head monk and a Burmese boy who worked on the monastery grounds. And by “chatting” I mean reading through my Burmese phrasebook and taking silly pictures with my camera while the head monk asked why I don’t speak Burmese and where I left my husband before attempting the climb. 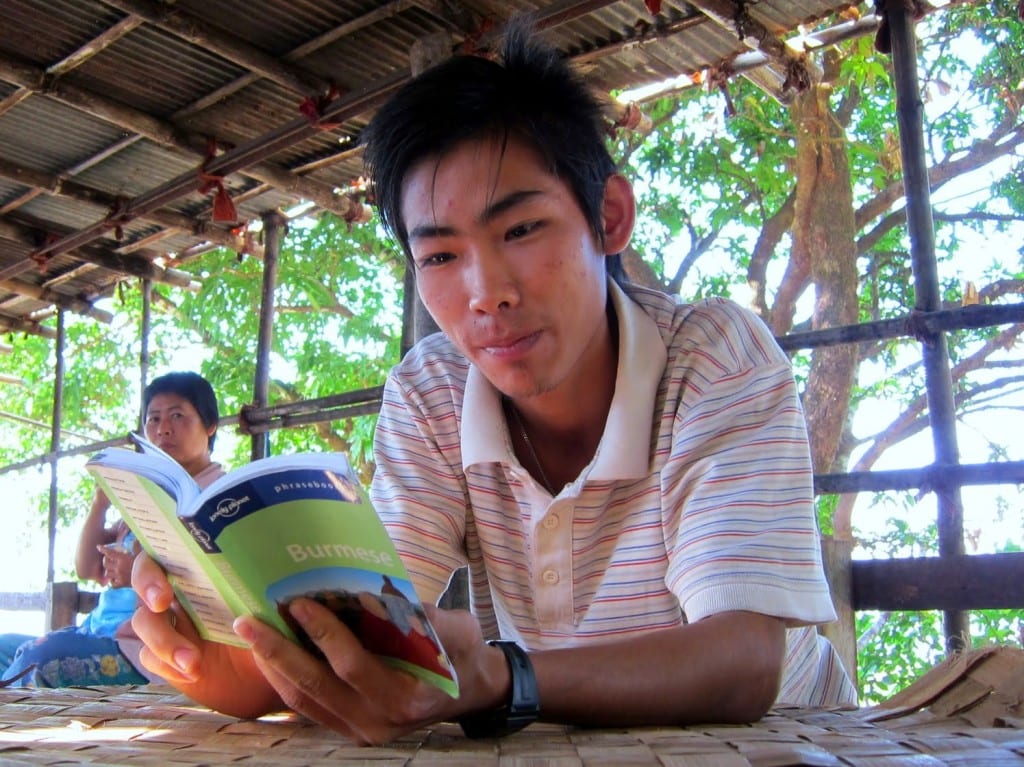 Burmese boy with my Burmese phrasebook.

Of course, it wouldn’t be a “Jodi goes to Myanmar” post without a sunset. The view from atop Mount Zwegabin was a stunning one indeed: 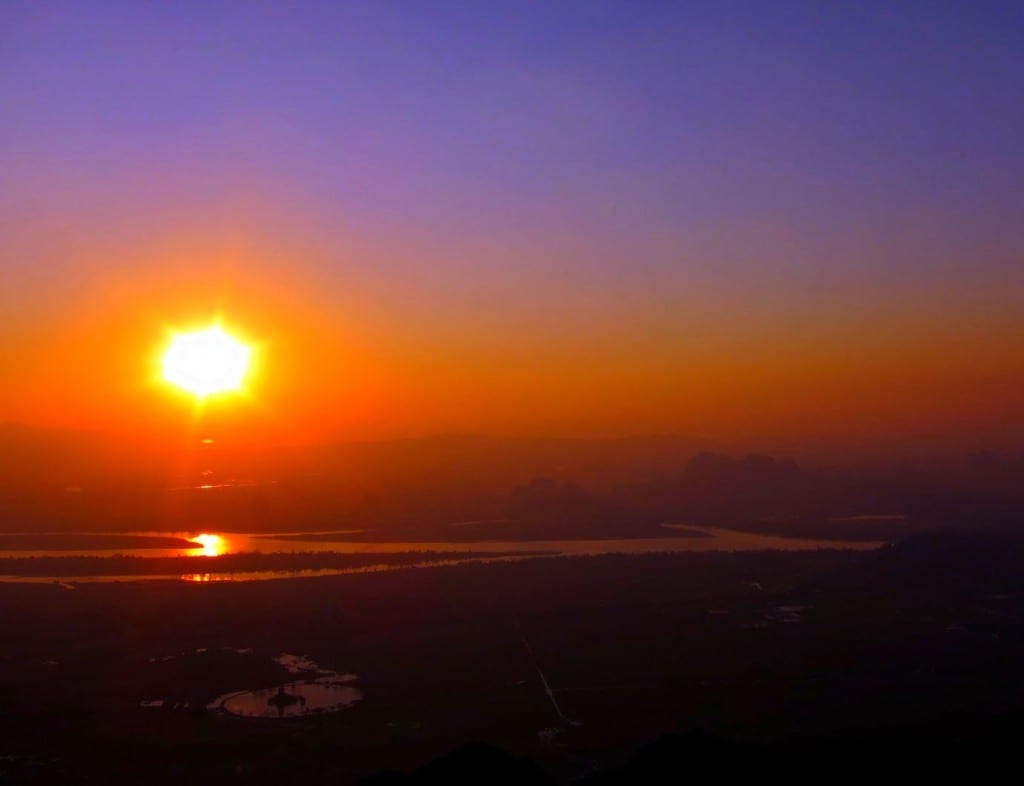 At dusk, the neon light from the zedi cast a fun glow over the monastery grounds. This picture reminded me of the deepwater fish with the light dangling from his head in Finding Nemo: 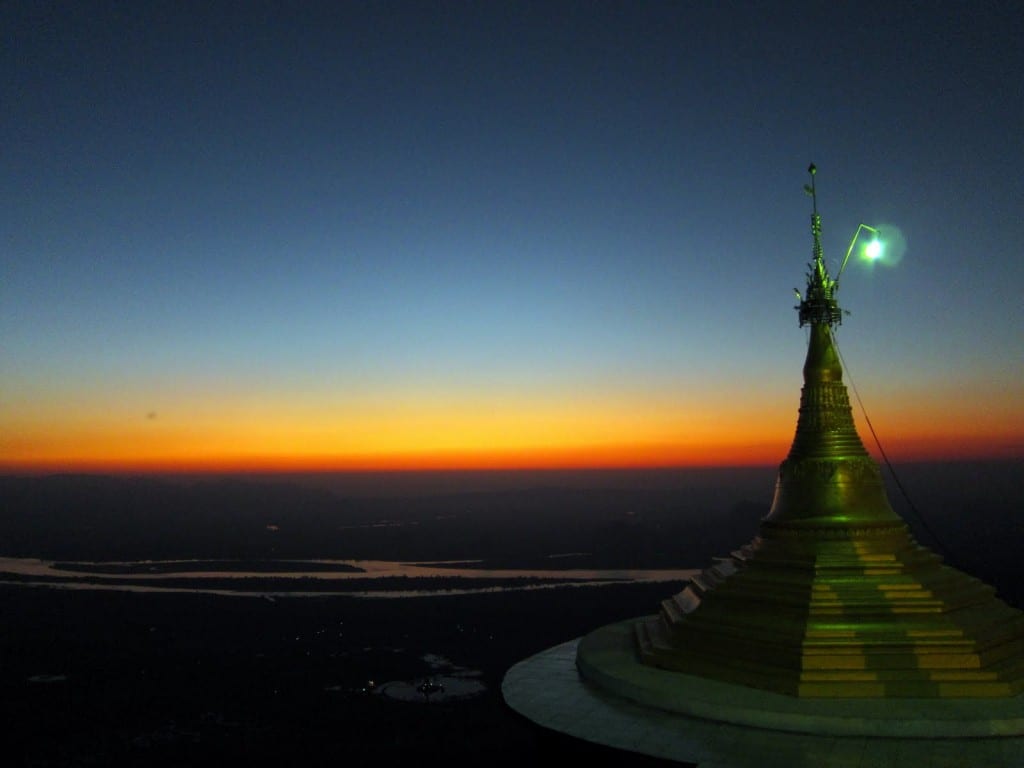 Once the sun went down, I was curious how long the generator would last and what everyone would do once the monks had retired for the night. The answer? Watch North Korean soap operas until the power cut out. It felt beyond surreal to be sitting on the creaky wooden floor of a Kayin monastery with a giggling Burmese girl and a room scattered with people staring at the TV. The soap was subtitled in Burmese, and one commercial was repeated at every break. It was so catchy that I had to share the scene, much to the general confusion of the Burmese in the room:

Waking up as the sun came up, I donated the blanket I bought from Hpa-An to the monastery, made a donation as thanks for my lodging and started down the hill. I didn’t know then that the aggregate of my memories from Zwegabin would remain so fervently etched in my head as a highlight of my travels, nor that they would serve as the impetus for the first truly personal post on my blog (and ultimately my most popular one yet).

More to come from Myanmar!