After crossing the border from Chile into Argentina (via a 10km “no man’s land” following Chilean exit customs but prior to actually entering Argentina), the following sign greeted us at Argentine customs: 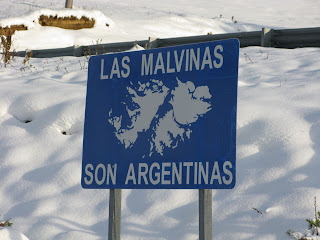 Subtle, they are not.

A 5 hour bus ride later we arrived in El Calafate and checked into Hostal del Glaciar Libertador. A note about the hostel: great wooden common room and restaurant area, tiny kitchen, insanely strict rules and a strange floor-heating system that made you feel as though you were walking on fire. Jess and I had some strange roommates who insisted on cooking on the hot floor with a camping stove, so we spent very little time in the cramped room. However, location was ideal as was the price.

Day 1: a trip to Perito Moreno Glacier. With over 250 kilometers squared of moving ice, the glacier is the 3rd largest reserve of fresh water in the world, and it is surreal to behold. 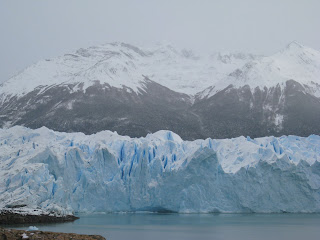 Glancing through the pictures of the glacier will not even remotely express what it feels like to stand in front of it. Because of a small break in the towering Andes, water from storms on the west coast carries eastward and blankets the 48 glaciers in Chilean and Argentine Patagonia with snow. The Perito Moreno glacier is one of the few that is considered ‘stable’, meaning that it is not retreating (other glaciers in the same national park are in retreat) and it marches forward over Lago Argentino, hitting the peninsula in the middle of the lake. At this point, the water in the Brazo Rico (rich arm) of Lago Argentino is over 30m higher than on the other side of the peninsula – ’tis a lot of pressure of frozen water basically smushing itself into the land. The resulting tension causes sporadic ruptures in the glacier. The last big rupture was in 2006, and i can only imagine the auditory and visual spectacle that it must have wrought. i stood on the ramparts watching the glacier for hours and the small chunks that tumbled into the lake made such a clamouring, thunderous noise that a rupture must be unbelievable.

Perito Moreno is not, as I initially thought, a ‘small dog moreno’ (incidentally, small dog is perrito not perito, as i learnt). Perito means specialist and Francisco Moreno, explorer and knower of all things border related was appointed perito in the early 1900s for his knowledge about border conflicts (and ostensibly his strident defense of Argentina in its attempts to defend its borders against Chile).

After a great day on the glaciers, Jess and I went out for dinner and drinks with new friends, including the terrifyingly bad Ferenet (a bitter spirit concocted via combination of extremely ill-suited herbs and spices: it tastes like cough medicine, eucalyptus and urine combined). There were steaks a-plenty, drinks a-flowing and good times were had by all. 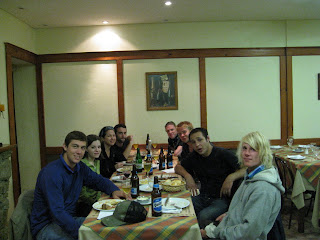 Our time in El Calfate ended with a bus ride at 4am, with a destination of Bariloche 33 hours down the road. Nightime departures are given without batting an eye here. I never thought I’d get used to pitch black walks to the bus station, but apparently there’s room for everything on a RTW trip.

For more about El Calafate and visiting the glacier, see the El Calafate WikiTravel post.