sssIf I had to choose one cuisine to eat for the rest of my life, I would immediately opt for Vietnamese food. I spent several winters exploring the country, with time spent in Saigon and Hanoi, in Hue and Danang, and eating as much as I could every second of every day. As a celiac, eating gluten free in Vietnam was not only possible but gloriously easy. Once I learned the ingredients I needed to avoid, I stuck to street food where I could see dishes being made and I explored to my taste buds’ content.

The following guide will help people navigate Vietnam with an eye to avoiding gluten. I am very sensitive and have avoided some dishes at restaurants where oil could be contaminated. The benefit of street food is that often the stalls are one-stop wonders, and if it involves something fried on the spot, the oil is only used for that product.

Eating in Vietnam was a pleasure, but also a good part of why I love to write about food. It isn’t just about taste, but the experience of sharing a meal in the midst of chaos, sitting on a blue plastic chair.

I hope this guide, twinned with my long Saigon Street Food Guide will make your time in Vietnam exciting, delicious, and filled with incredible sights.

Already know you want a gluten free translation card? You can buy my Vietnamese card here, as well as Italy, Japan, Greece, Spain, and more! 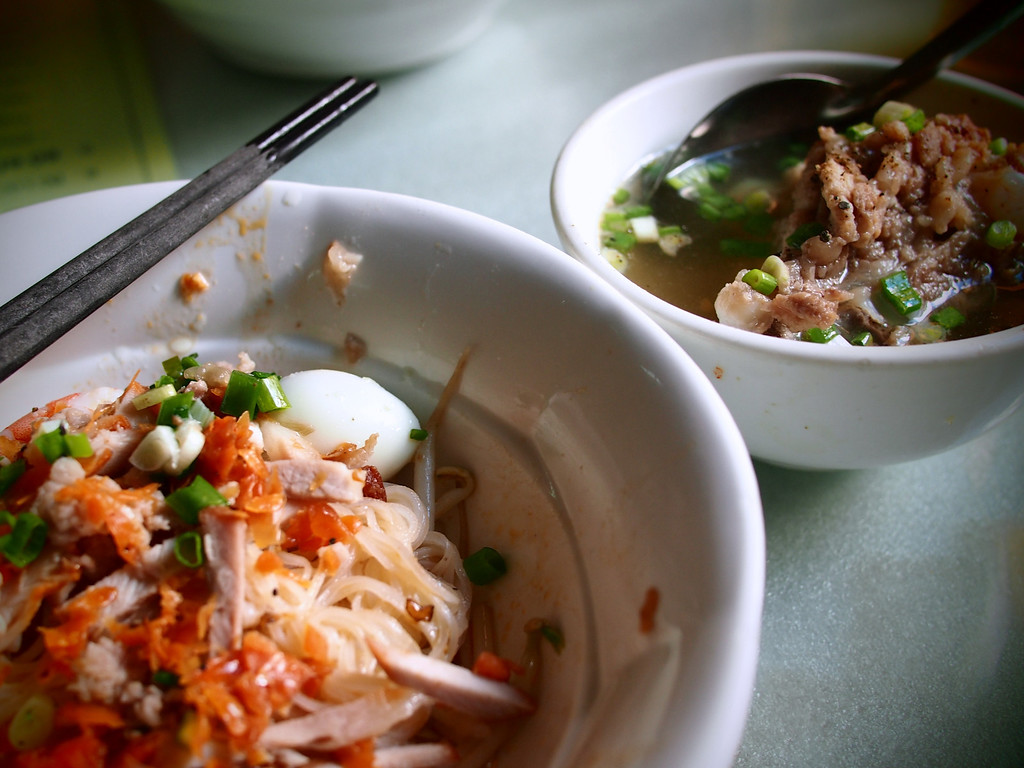 Overview of Eating as a Celiac in Vietnam

I was diagnosed as celiac in early 2000s, though I rarely wrote about it when I started Legal Nomads. Honestly, I didn’t think readers would be interested, and it was something I struggled with heavily as I travelled but I kept it to myself.

When I met readers, many mentioned they also had celiac disease, so I started making sure I provided tips for celiacs or those following a gluten-free diet. This gluten free Vietnam guide is built with an aim to help fellow celiacs, but also to encourage people to eat in the country — it’s truly some of the best food you’ll try.

Saigon was a paradise for celiacs. I have been “glutened” inadvertently in Hanoi, where wheat is used more frequently, but in the South — Saigon and the Mekong — I have not had any trouble. I should note cross-contamination is an issue as I am really sensitive to gluten, but despite this the soy sauce in Southern Vietnam has been fine for me. The soy sauce does not have wheat listed as an ingredient, unlike the ones we find in the West or in China and Japan.

Whether that means there is no trace gluten in the sauce remains in question, but I did not get sick when eating soy sauce dishes on the street.

There is some contention about soy sauce generally, as some companies have said that fermenting soy sauce removes the gluten. Yes, it’s true that fermenting means that testing antibodies won’t detect hydrolyzed gluten, but the peptide chains remain, and gliadin is still there. Nima Sensor has a whole blog post about it, for those interested.

Tourist-driven (read: fancier) restaurants will import wheat-y soy sauce from elsewhere, so my solution was to eat everything streetside, with great success.

This card was the second in what has become a series of gluten free guides and local language cards, and I’m excited to be working with translators and celiacs to build detailed and safe cards for us to use on the road.Each of the cards in the guide has been created with celiac-specific research, mention of cross contamination, and double checked translation from locals who speak the language.

Why is this Vietnamese card different?

I have used several different translation cards on my travels, and still got sick. I may be more sensitive than some celiacs, but even a small amount of contaminated oil for frying, or soy sauce in the food, is enough to make me ill for days. Let alone the joint pain later that week! This card is different because it not only uses all of the local food names for what to eat or avoid, but makes clear mention of the cross contamination concerns.

A big thanks to To Tra for enlisting her entire family’s translation services in an aim to make this card as thorough as possible without overwhelming waitstaff.

Before I went to Vietnam, my familiarity with the cuisine was quite shallow. Even now, after years of time in Saigon, I am likely missing some of the great dishes in my repertoire. One of the most rewarding things about Vietnam travel is how excited people are to share their food with you. As a celiac, the best weapon against anxiety from the disease is an understanding of the building blocks that go into each dish. Vietnam makes this easy for you.

One of the most helpful aspects of Vietnamese eating is that the dish names are profoundly descriptive. What we in the west call pho is not only a soup name, it refers to the noodle used in the soup. Same for many other dishes, such as the litany of bun or banh dishes, referring to the starch that defines them from other dishes.

Please see my VERY long food guide to Saigon Street food for photos and a more thorough description of each of the dishes below — this should be read alongside the current gluten free Vietnam guide to provide you with the most thorough information prior to your visit.

Condiments — the plum or hoisin sauce with pho, for example — ought to be chosen quite carefully, but the most common condiment of all, fish sauce, was gloriously gluten free.

That said, Andrea Nguyen writes in her post on Asian gluten free eating that some fish sauces aren’t safe:

Note that occasionally fish sauce will have an ingredient called hydrolyzed wheat protein, which is not gluten free. I have not seen fish sauce with this used in Vietnam very frequently but it merits checking if you are celiac. The Vietnamese ingredient name is “protein lua mi”

Thankfully I did not suffer adverse reactions to fish sauce during my winters of eating in Vietnam, but it is worth mentioning in the event it becomes more common.

Note that eating gluten free in Hanoi was more difficult for me than in the central or southern areas of Vietnam, due to the Hanoi and northern Vietnamese dishes’ use of soy sauce more frequently than in the south where fish sauce rules.

Fish sauce aplenty, to stay or to go. 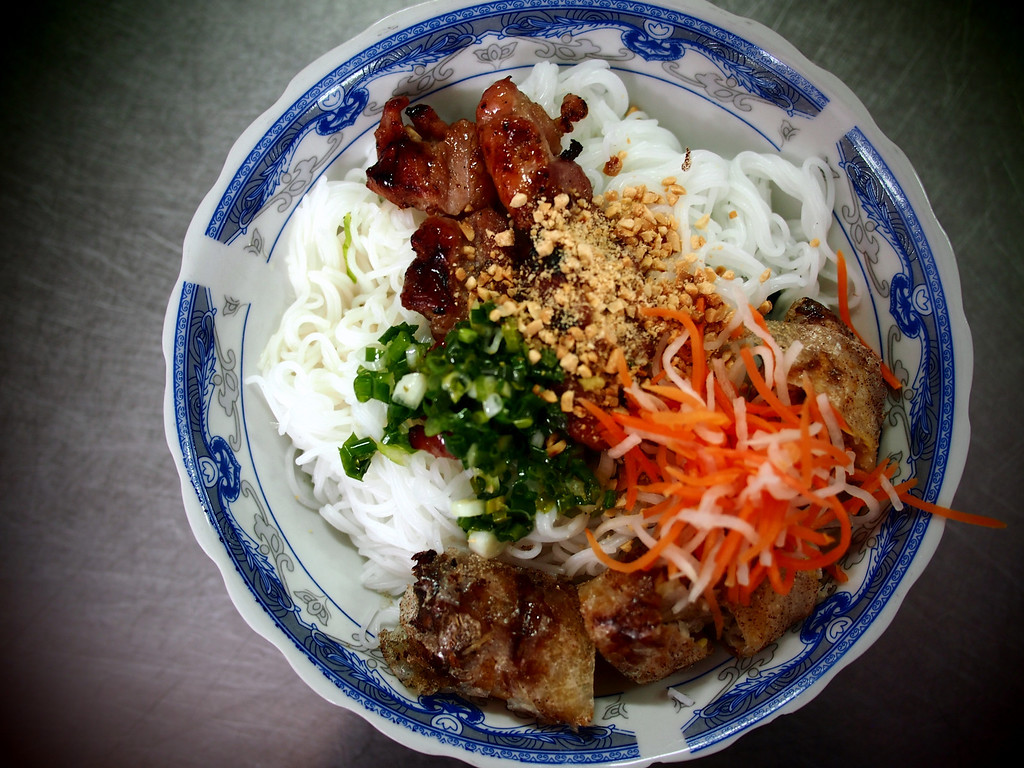 Bun noodles are made from rice and are gluten free. 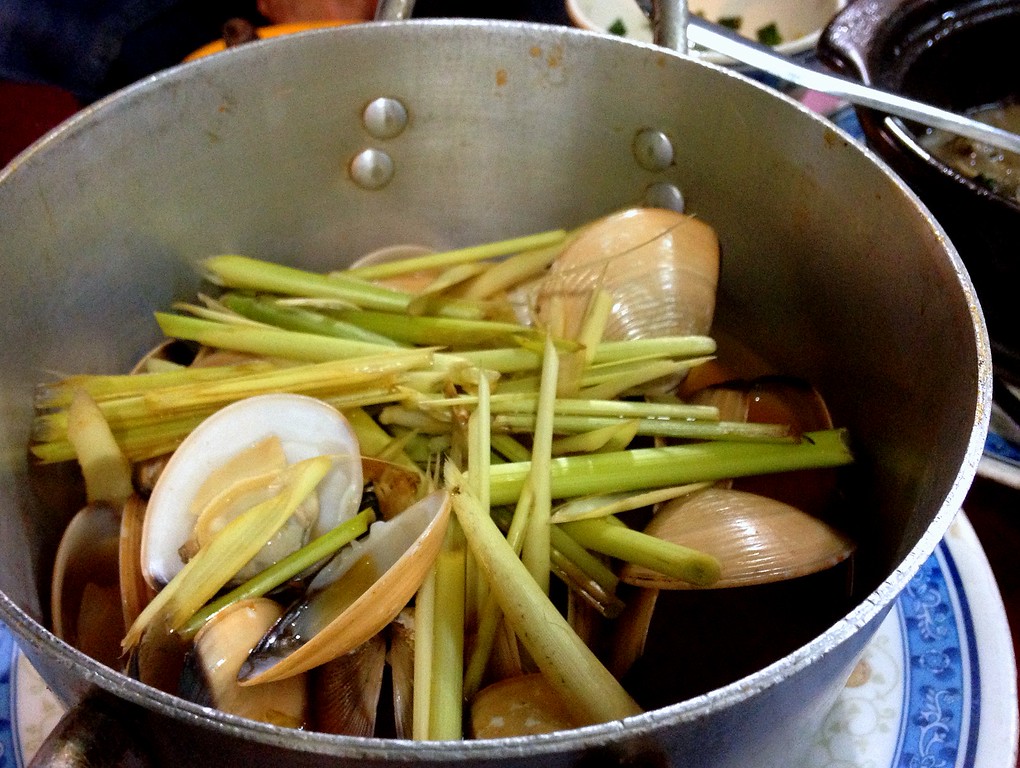 Lemongrass clams, served street-side. One of my favourite meals.

I would be remiss if I didn’t mention the snacks.

One of the hardest parts about being a celiac is that often the “on the go” snacks that countries offer are made from wheat. It makes sense; the sandwich or pastry are both easy ways to transport food without making a mess. With the exception of Mexico, where corn snacks are everywhere, I’ve had a hard time with mid-meal noshes. 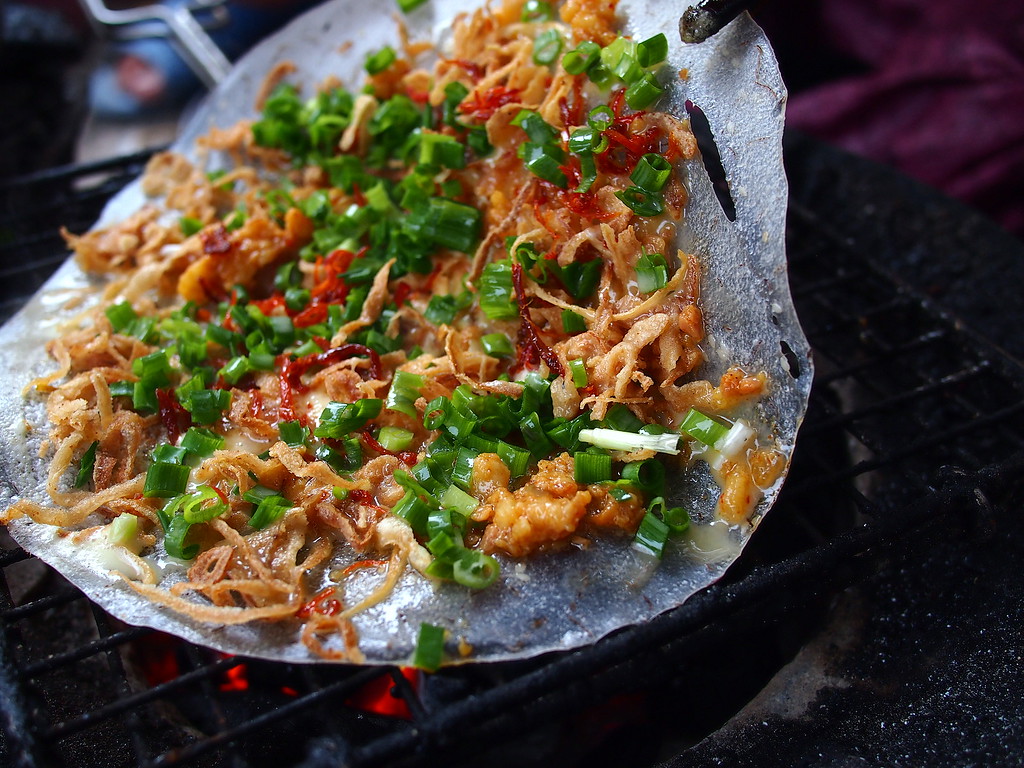 What ISN’T gluten free in Vietnam?

This list is blissfully shorter than many countries out there, but is worth memorizing the names – nui, my, won ton – so that when you see it on menus you know what to avoid. The Vietnamese card also has these foods to avoid.

For those of you looking to visit Vietnam, there are some wonderful books to help inform your visit. The country is a complicated one, with a history that includes war and migration of citizens and a deep love of food.

My suggestions for more historical background:

My suggestions for food books:

For the rest of my celiac translation cards and guides, see here.