Last month’s recipe was a big hit, and several of you have sent me your photos of egg coffee based on my Vietnamese egg coffee directions. Keep them coming! In line with recent travels, this month I decided to share a banh khot recipe.

Banh khot (Bánh Khọt with diacritical marks) are mini-sized rice pancakes that are fried and served rolled up in fresh mustard leaves and herbs, then dipped in sweetened fish sauce for dipping. There are two main kinds of banh khot that I tried in Vietnam: in Vung Tau, below, a crunchy flatter disc topped with shrimp powder, and in the Mekong Delta, a slightly thicker, spongier disc that was often tinged yellow with turmeric.

It’s not a dish I had heard of prior to visiting Vietnam, having instead gotten to know its larger sister, banh xeo (“xeo” meaning sizzling, accurate for how it is cooked). Banh khot is cooked in a special pan, with mini cups like the ones used to make aebleskiver, Danish pancakes. Another option is the pan used for takoyaki, octopus balls that originated in Osaka, Japan.

Both banh khot and banh xeo are eaten using a similar technique of wrapping the pancakes in greens before eating. The readers with kids that I took for banh khot loved it as there was a DIY method to their meal. But who am I kidding, it’s equally as satisfying for adults too.

The history of banh khot is unclear. Several Vietnamese friends in Ho Chi Minh City told me that it derives from the coastal region of Vung Tau, and others have said that it derives from deeper in the Mekong Delta. No one I knew was able to trace the dish back to its roots, other than informing me that it was a smaller, sizzling version of banh xeo.

Online research was equally fruitless – “Possibly no one knows when banh khot … appeared in Vietnam’s cuisine and people are sure if the popular and cheap dish is the specialty of the southern coastal province of Ba Ria-Vung Tau” said one site.  Right.

What is clear is that Vung Tau, even if it is not the birthplace of the dish, has certainly become the place to try it. While there are a few places in HCMC that make the mini rice pancakes, they pale in comparison to what we ate at the side of the road in Vung Tau for a fraction of the price.Popular at breakfast, banh khot is also available at several restaurants in town at all hours of the day.

As Tom from Vietnam Coracle notes, “Looking like a collection of asymmetrical coins from a haul of ancient treasure, bánh khọt are mostly found on the southeast coast, but nowhere more so than the thriving beach town of Vũng Tàu.”

What follows is a simplified version of the banh khot found in Vung Tau and Ho Chi Minh City. Often, the shrimp topping is complimented by a shrimp powder (you can see it in the second to last photo below), made with ground shrimp, Annatto oil and fish sauce. The optional powder recipe is found at the end, but the dish is also delicious without it.

As a celiac, it’s important for me to note that this is also a gluten-free recipe. However, if you take the short cut of buying banh khot mix from a store, do take a look closely at the ingredients, since they often include wheat flour as well as the usual rice flour mixtures.

Serve with mustard leaves, romaine lettuce leaves and fresh perilla and basil for to create your own spring roll with each pancake, wrapping a banh khot in leaves and herbs, then dipping it into the fish sauce.

Rinse and drain shrimp, then pat dry with paper towel and grind them in a food processor. Heat a nonstick pan and fry the ground shrimp mixture with the fish sauce and annatto oil until the liquid has evaporated fully and the mixture is dry, stirring constantly. This can be cooked ahead of time then set aside for later use.

Mix water, sugar and lime until sugar dissolves. Slowly add desired amount of fish sauce (more is better!) . If you’d like a bigger punch to the sauce, add in garlic cloves and chillies, though these can be served on the table and added to each person’s dipping dish depending on their preference.

Where to Find Banh Khot in Ho Chi Minh City

If you can’t make it to Vung Tau, there are options in HCMC where you can enjoy this satisfying, crunchy dish.

When in the mood for reliable banh khot in town, this is where friends and I would go. The restaurant offers different flavours of pork or seafood, and the giant mustard leaves are bottomless – when you run out, you get more in a flash. It’s also one of the few spots that makes a banh khot chay (vegetarian option) for those with vegetarian dining companions. 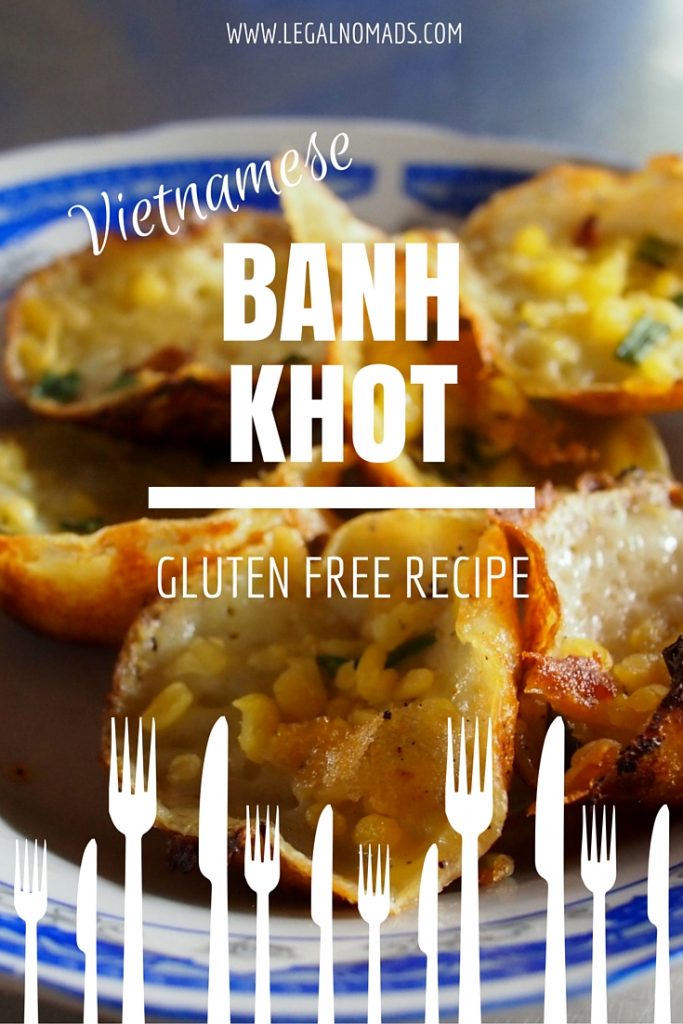