Welcome back to Thrillable Hours,  my interview series about alternative careers for lawyers.  This week’s interview is with Stanford law alum Mahbod Moghadam, one of the minds behind the very popular Rap Genius site.  The site aims to be a guide to the meaning of rap lyrics, allowing you to listen to songs, read lyrics and then click on the lines that interest you for instant explanations in the form of pop-ups. They’ve got a huge lexicon of songs already, and in their own words “our aim is not to translate rap into nerdspeak, but rather to critique rap as poetry.”

The site is run Wikipedia-style, with contributions from readers running the show, with the best of the submissions highlighted by Rap Genius’ editors. Above The Law wrote up Rap Genius last summer, linking to a lawyerly interpretation of Jay-Z’s 99 Problems. And as The Next Web recently noted, with traffic that is curving upward day by day, Rap Genius is on to something big.

You were an associate at Dewey LeBoeuf and dreamed up Rap Genius on a deferral of your start date. How did the site come about?

Rap Genius started on a couch – I was explaining Cam’ron’s “Family Ties” to my friend Tom Lehman (he was working at a hedge fund at the time) and he built the site the next day. We started to get so much attention that we decided to work on the site full-time, along with our friend  Ilan Zechory, an ex-Googler, about a year ago.

Helllls yeah! There is a major nexus between hip-hop and the law – we are actually trying to turn Rap Genius into a firm. From the Rap Genius LLP page: “Lawyers want to be rappers, rappers want to be lawyers; it’s a tale as old as time. And Rap Genius is no exception to the legal/rap nexus: we have editors who are graduates of elite law schools, and we also have a judge on the 9th Circuit who contributes (hint: obsessed with Gucci Mane!)”  We also have two of our editors currently clerking for the Supreme Court, Kagan and Sotomayor, respectively.

We’re starting to kick it with all these rappers who are my heroes – I can’t wait until we meet Jay-Z. Our analysis of his “99 Problems” is straight out of Crim Pro.

I’ve got a soft spot for Venn diagrams, so I need to know: who came up with Rap Genius’ logo?

That was Tom’s design – it actually got ripped off by a rapper! Donald Glover of “Community” aka Childish Gambino pulled a jack move on us –> 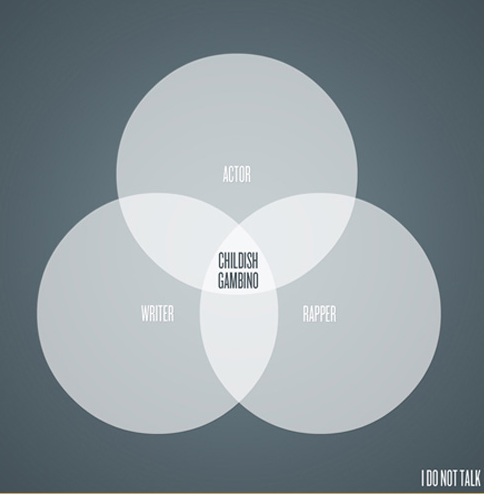 Don’t be scurred! The nice part about law is that there’s a ton of cake so you can have your cake and eat it too – just remember to pay off your loans. Also, I know it sounds corny – but law is a great preparation for entering many professions – business or journalism, etc. I hate when lawyers complain about their jobs. Law is dope, you just have to get into it.

Do you plan to return to the practice of law?

We’re practicing every day. We’ve got all sorts of partnerships we’re forming right now – I feel like I’m our General Counsel sometimes! Also, we’re trying to build a “Law Genius” site. We recently explained the Bill of Rights, Rap Genius-style, to set it off.

Lawyers are down to party – and lawyer girls tend to be sexy so that’s wassup.