There were still many more places to visit in the Philippines, and so I reluctantly dragged myself away from El Nido and planned my boat ride to Coron Town, on Busuanga Island. While most places tend to advertise a 2,200 peso boat ride to Coron, I was still scarred from my Port Barton trip and instead opted for an overnight cargo ferry.

Perhaps not the wisest move since these ferries seem to sink with alarming frequency (see also here for A LOT MORE) but it was a new mode of Pinoy transportation, I had already survived one overnight ferry ride in the ‘Pines, and it left at midnight (giving me a whole other day in El Nido). I left on Good Friday – technically Saturday AM – having bought my ticket from Atienza Shipping earlier that week. I went through a hilarious series of Abbott and Costello-esque conversations with Atienza to try and figure out if the “April 10th at midnight” departure date meant late Thursday, as it would in North America, or late Friday. Their confusion was so palpable that I stopped asking the that I ended up just letting it go, and relied on the fog horn of the approaching ferry for me to figure out when I was supposed to leave. The result: The 10th at midnight meant late Friday, not late Thursday.

In the end, I had an uneventful and surprisingly pleasant trip to Coron Town. The boat wasn’t overcrowded, we had 1 foot-wide vinyl cots to sleep on and there were only 10 roosters aboard so I managed to sleep. We also had a water buffalo at the front of the boat, and huge tanks of fish and lobster at the back. The Pinoy travelers wanted to know why in my right mind I took the ferry, but it was almost as fun a ride as my initial overnight ferry from Iloilo and as the boat didn’t sink, I have only good memories. Bonus: the fare of 750 pesos ($15) included 2 meals, and we got to stop at Culion, what was once the world’s biggest leper colony, on the way.

Coming from El Nido aka Paradise Found, Coron Town was a monumental change. There are no beaches near the town itself – you need to take a boat to get to one – and there is very little in terms of restaurants and bars that are worth a repeat visit.

That said, Seadive (a popular hotel/bar/restaurant/dive shop/everything else you might possibly need but were too afraid to ask) had free WiFi, good food and cheap rum, and Bistro Coron, run by a cantakerous Frenchman who cooks fantastic food, were the choice hangouts. Since Coron is a mecca for wreck diving and I cannot dive due to an inner ear disorder, I was bored out of my mind by day 2. Luckily, I was joined by Lasse, a Danish guy that I met in Port Barton and kept bumping into thereafter, and we rented motorbikes to explore Buswanga Island.

Not so gorgeous: the sleeping arrangements on the cargo ferry to Coron: 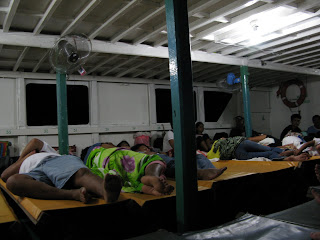 mandatory rooster on board: 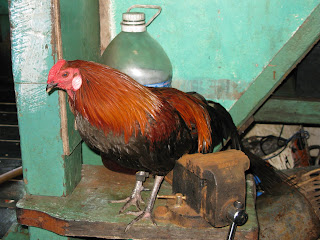 A short 4 days and one disturbingly cheap flight to Manila later, I was back at Friendly’s hostel, trying to plan a way to head back to Palawan again. First, though, a two-week trip with Craig through the rice terraces and caves of Northern Luzon’s Banaue, Batad and Sagada.