My decision to come to the Philippines was based solely on an irrational love for one of the world’s smallest primates, the Philippine tarsier. Endemic to Bohol, parts of the Visayas and Mindanao, this rodent-like animal with enormous beady eyes is currently classified as endangered. Years of poaching to sell them to Japan as pets had backfired – the tarsiers are social animals and, if kept alone in their cages, gruesomely commit suicide by bashing their heads against the bars. They only have one baby per year, and numbers were precariously low, until the Philippine government gave them a protected status.

Now one of the biggest tourist draws to Bohol, the tarsier’s population has inched upward somewhat but it remains endangered – only 10 of them live in the Tarsier Sanctuary. Having called every zoo association in North America and found them tarsier-less (and, frankly, a little bit confused about why a grown woman was looking for them), I decided (somewhere between Siberia and Mongolia) that on this insane jaunt around the world, the Philippines would have to be on my list.

Tarsiers on Bohol Island, The Visayas

One of the best things about having a baby brother who can finish your sentences is that he doesn’t need to be told how wholeheartedly awesome it would be to travel together, let alone for the sole purpose of chasing down a miniature rodent. Currently employed by the government of Canada, Cale had a conference in Oz and managed to finagle 2 weeks vacation time thereafter. Of course, it would have been a lot easier for us to meet in Oz given his time constraints, but the lure of The Story was too big to ignore, and we were both excited to meet up somewhere totally different and much more out of the way. Insert parental eye-rolling here.

I met Cale at the Manila airport and we flew down to Bohol’s capital city, Tagbilaran. From there, it was a bus trip just past Loboc, where we were unceremoniously dumped at the side of the road so that we could find our hostel, Nuts Huts. Deep in the Loboc jungle and perched above the emerald Loboc river, Nuts Huts was a perfect place to kick off our Pinoy adventures: it was 1km from the main road via dirt trail, and then over 300 stairs down to our nipa hut. Given that the restaurant/lounge area was halfway up those stairs, all of the guests tried to remember everything they would possibly need when they left their huts in the morning. Good exercise though, and the (somewhat domineering) owners Rita and Chris favoured health over sloth – they even had a scale by the door of the restaurant to see how those stairs were faring on your weight.

Our aim in staying near Loboc rather than Tagbilaran was twofold: we wanted to be close to the Tarsier Sanctuary and also the Chocolate Hills, Bohol’s other main tourist attraction. We decided to tackle both of those sights in one day, and rented motorbikes from Nuts Huts to wind our way through Bohol’s dirt-clogged interior roads, most of which were under construction. Since Cale had never ridden a motorbike before, we opted to get one each, banking on the odds that one of us wouldn’t fall off and could get help if needs be. It turned out that he was a natural anyhow (not surprising) and we happily whizzed around the island, the wind in our hair, the flies in our teeth and the locals clamouring out to meet us at the side of the road. 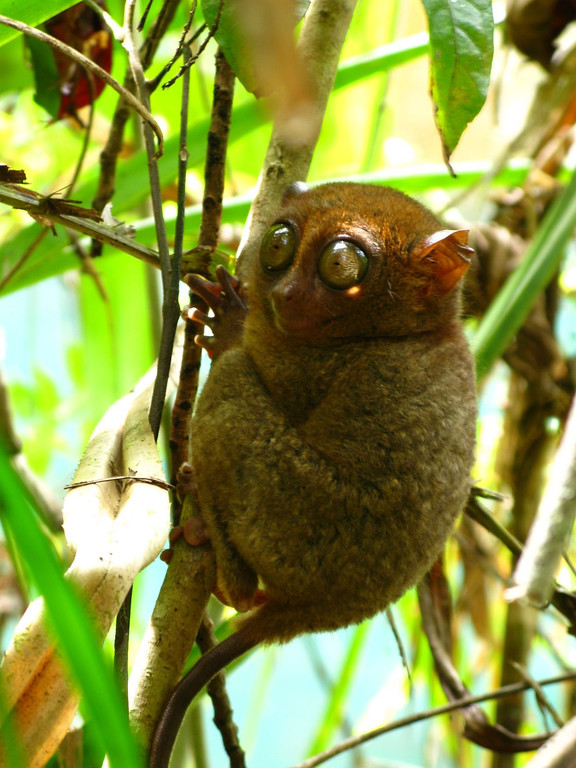 First off: tarsiers! Though they can turn their heads around 180 degrees (compensation for the fact that their eyes are firmly lodged in their sockets and cannot move at all), and though you were able to get up close and personal with them, seeing the little fuzzy balls of wonder was a bit of a let down because you were only allowed a 10 minute walk through the sanctuary (they get agitated if people are around them for too long). Because I desperately wanted to take one home with me but knew I couldn’t, Cale convinced the guide to bring us around the sanctuary a second time so that I could get more of a tarsier-fix, as our friends Laki and Signe patiently waited for me to come bounding out of the forest to head out to the Chocolate Hills.

The Chocolate Hills was somewhat of a misnomer since they are currently green, not brown. An as-yet unexplained geological phenomenon, geologists have posited that they were formed by the rising coral deposits over time, combined with the erosion during the wet season. Since no one has conclusively accounted for their existence, locals maintain that the 1200 perfectly conical hills were created by a giant who shed tears for his lost love, tears that were so heavy that they created perfectly symmetrical indentations in the ground. In the dry season, the green sheen does turn to brown but we were at the cusp of the wet-to-dry months and the hills were still lush with vegetation. 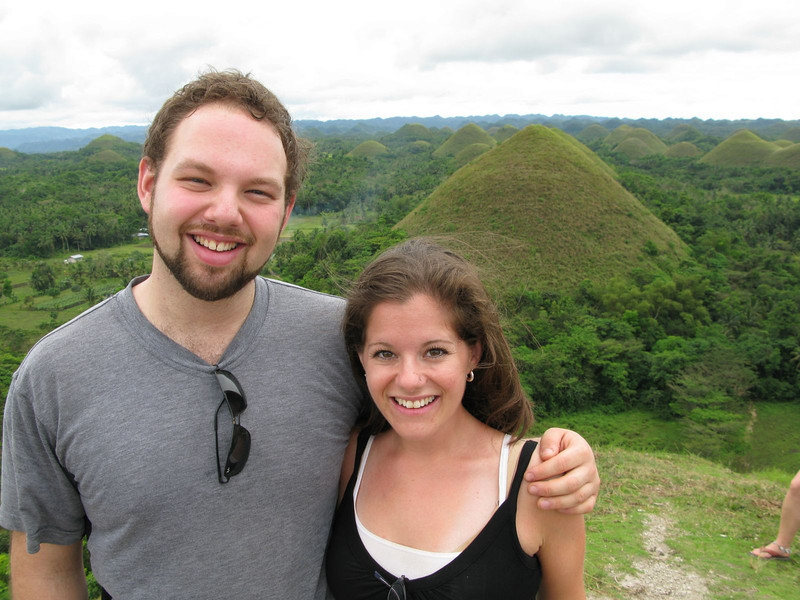 In our brief time on Bohol, we also managed to squeeze in a swim to a small waterfall down the Loboc river (with the locals in the riverboats all screaming “hello! Friend! Why you swim?” as they motored by) and a cave hike into the Loboc jungle to two bat caves (very, very full of bats), where we discovered the horror that is a scorpion spider:

Though Cale really wanted to go to Palawan, we were deterred by everyone’s insistence that it was too remote to visit in the week that Cale had left (I have since corroborated this) and so we decided to head into Northern Mindanao to visit Camiguin Island.

Next up: The Ettenbergs head to Mindanao, where even our insurance won’t cover us!