The Saga of Computer Repair in El Nido

I have been travelling now for over a year, and my electronics have changed considerably. When I started out, this blog was something I updated at computer cafes or internet shops, since I was not even travelling with a laptop.

Now that the blog is more of a priority, I do have a laptop but one that caused me some distress when a rat ate through the charging cord in El Nido, in The Philippines.

Trying my Hand at Computer Repair in El Nido — Badly

October 30, 2008: Promptly rename the computer the “Weee PC”. Start shopping for “W” stickers to put next to the EEE on the front.

January 2, 2009: Decide to go to Future Shop in Montreal to find a replacement to the unwieldy Singaporean charger, opting to swap out the plug for a two-prong one that fits into the Asus charging bar but 1) doesn’t weigh 1kg and 2) doesn’t only work in the UK, Ireland, HK, Singapore and Malaysia.

Feb 4-May 15, 2009: Charger works fine, though the charging bar gets disgustingly hot when it is juicing up the Weee PC. Stop leaving the computer to charge unattended for fear of fires and/or random lawsuits.

May 19, 2009: Rats climb onto my bed and chew through part of the charger, right near the plug. I electrocute myself twice trying to plug it in without wearing my glasses (and therefore not noticing the live freaking wires at the end of the cord). I splice the wires, duct tape them up and the charger is good as new….minus that strange smell when it is plugged in.

May 25, 2009: Charger stops working entirely. Upon closer inspection, I see rats got to the charger in TWO places: near the plug and near where the cord is plugged into the Asus power bar. I blame this on the initial rats (hopefully long gone due to the rat poison under my bed – take that, computer destroyers!) as I’ve protectively swathed my charging cords in layers of bags ever since.

May 26, 2009: I splice, duct tape and cut my heart out. Nothing: charger still doesn’t work. The staff where I work think it is odd that I am so preoccupied with fixing it. I try and explain the blog and my trip as a whole, but they are at a loss as to why people want to read about my staying in El Nido. Also, they want to know what a blog is.

May 27, 2009: I cave in and try and find an electronics store that sells a replacement charging cord. As you will see in my next post, I happen to be living in a town of about 4,500 people with no main supermarket, one bakery, a wonky electricity grid that is supposed to run from 2pm-6am but cuts out sporadically, usually when you are about to send a Very Important Email, almost no cars(but hundreds of tricycles) and many, many roosters but no store that sells toilet seats. So my charging cord? No where to be found. But the town is also full of lovely, engaging people who think it is hilarious that a small girl with no husband is 1) staying put for so long and 2) so obsessed with fixing a computer cord. Ergo: pretty much everyone on the main street in El Nido spent their afternoon helping me repair it.

I am not exaggerating, either. I initially went to 3 hardware stores, and each one brought me to another, and then another and then another – with each of the prior shop owners coming along for the ride. One store replaced the plug at the end with a new, shiny white one, another tried cutting through the cabling at the end of the cord (where it connects to the Asus power bar) and re-splice the wires there, and a third ended up trying to feed me boiled plantains because he had no idea how to fix the charger. In end, it took an electronics store – i.e. a shopfront selling fruit and veggies with a guy in the back who happened to own a soldering gun and some tools – to melt the crap out of the wires and solder them together. This was at 5pm. I started my charging odyssey at 1:30pm. 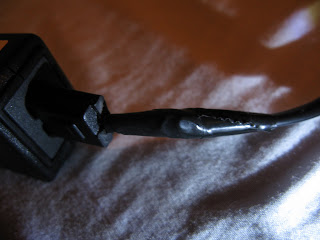 So that’s how I am able to post this and is yet another addition to the long list of why I am so grateful to live in such a lovely place for the next few months. Helpful people, delicious ham and egg sandwiches from Yummy Angel Burger and a breathtaking view are also on that list, but more on El Nido in the next few days.