After a lovely few weeks of pool and beachside relaxation in Perú, we took the bus to Ecuador´s biggest city, Guayaquil.

Discovered in 1538 by Francisco de Orellana (which explains the many streets named after him), Guayaquil is built along the Guayas River, with the city centre seeping out from the river and the bohemian, artistic Las Peñas area to the north. Every guidebook we’ve seen gives Guayaquil a bad rap – it seems to get a vague “you could do without seeing Guayaquil” or “use it as a stop over to the Galapagos” at best. With much of the tourism centered around Quito, and the much more liberal Guayaquil historically at odds with Quito´s staunch conservatism, Guayaquileños are quite bitter about playing a second fiddle to their smaller capital city.

I have to say, I’ve really enjoyed our time in this city. From eating the most incredible grilled meat at El Toro Asado (seriously – if you are in Guayaquil and eat meat, I’m going to need you to go here), to the Malecón 2000 and its many parks, benches and bridges (a huge restoration of the historic waterfront, spanning the whole west side of the Simon Bolivar Pier), to the markets of Bahía (where we each bought futból jerseys), Guayaquil has a lot to offer.

We also spent an afternoon in Simon Bolivar park and its many iguanas (the park is almost littered with them – as you can see by our pictures, iguanas are the new squirrels, at least in Guayaquil!) and climbed to the lighthouse atop Las Peñas’ 444 steps to see the sweeping views of the city and the Guayas river below. In addition, the street food here – grilled plantains stuffed and overflowing with goat cheese, a slew of grilled meats, sausages and peppers to choose from and delicious corn on the cob grilled and smothered in grated cheese – is fantastic, and my 2nd favorite South American food (after dulce de leche), Pan de Yuca (munchkin sized rolls made from yuca and stuffed with – you guessed it – cheese) is on every street corner. I could stand to spend a few more days in Guayaquil, that´s for sure. 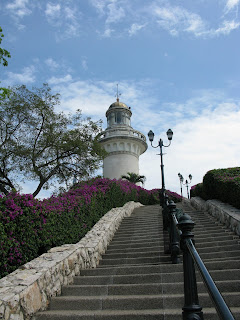 View from atop Las Penas, formerly a slum and now a tourist area of Guayaquil: 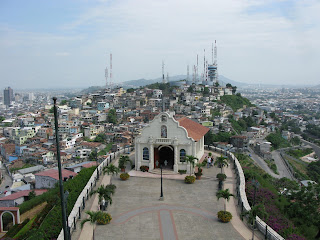 We completed our Guayaquil mission – to book a last minute Galapagos tour on a tourist class boat (luxury boats far exceeded our budget) – and decided we decided to leave the city for the hills, specifically Baños, in Ecuador´s Ambato province. Nestled between nearby mountains (including the fiesty Tungurahua volcano), covered in a fine mist and literally surrounded by waterfalls, Baños was a beautiful choice. In the brief 2 days there, we rented mountain bikes and biked 30-odd km along the lush Ruta de Las Cascadas (including through pitch black tunnels, without headlamps, with 18 wheelers bearing down behind us…..slightly terrifying) to see the waterfalls that surround the city, went canyoning down 5 waterfalls and Phil and I dove off a bridge (Jess is terrified of heights and the mere fact that she canyoned down the waterfalls with us might have shortened her lifespan by a few years … but she made it!). We also managed to catch both matches of the Copa Libertadores semifinals before we took the night bus back to Guayaquil. A packed but entirely satisfying few days.

Jess, Phil, me and our canyoning guide, Franklin, pre-canyoning, Jess and me below our 2nd waterfall and one of the waterfalls along la Ruta de las Cascadas: 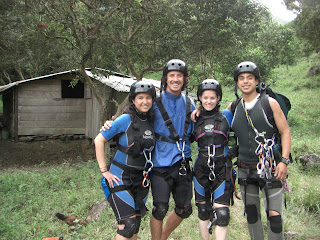 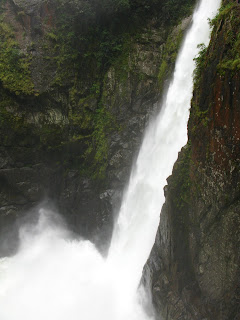 A personal note about Ecuador: it is great to be back. Having spent time here in 2002, I never forgot how genuine the people were and how the towering volcanos, humid jungles and bustling cities captivated me. And then there´s just the fun of arriving: as our itinerary shows, Jessie and I didn’t plan to be here at all during our insane jaunt around the world, which makes our time here that much more tangibly awesome.

We´re staying in Guayaquil tonight and then flying to the Galapagos tomorrow morning. We´ll be on the M/Y Friendship (reviews are dubious but it was the only boat we could afford) from May 30 till June 3rd, and then staying on one of the inhabited islands (likely Santa Cruz) to maximize our Galapagosization: we want to take snorkeling day trips and try and do some diving before we head back to the mainland on June 7.