Uyuni to La Paz, Bolivia: The Bus Ride from Hell

We (still our international foursome from Salar de Uyuni) had to take a night bus from Uyuni to La Paz. Neda’s flight home was on the 30th, and seeing as it was the 28th (and buses in Bolivia? Not so much on the reliable side) we had to book whatever was available. We bought tickets with a company that had only 4 seats left on the bus and assured us that it was a “semi-cama” (half bed) bus with heating.

Did I say assured? I should have said blatantly lied.

The bus sputtered up to the bus company´s office at our 8pm departure time and our jaws dropped. The bus was an out of service bus from Brazil (i.e. had no legs left on it and was sent to Bolivia instead) and was rusty, noisy and falling apart. Windows were taped together with clear, not-so-durable tape, the edges already peeling off in the cold. In the short interval between the arrival of the bus and our departure, a fight broke out in the back (over seats, of course) and in the resulting squabble another window was broken. The attending rushed over with tape, frantically trying to repair the window. We didn’t leave on time. All of the tourists at Uyuni’s bus station stood, jaws agape. Then they took their cameras out – this bus was too bad not to immortalize in picture form. Neda, Jess and I exchanged a look – we were in big trouble.

This was not the tourist bus. It was full of short, squat Aymara women, swathed in blankets, thick pollera skirts and bowler hats and carrying babies on their backs, and older Bolivian couples with weathered faces and battered hands, all stuffed into their seats and covered in piles of llama wool ponchos and blankets. Clearly they knew how cold the ride was going to be. We did not. The bus was oversold and people were standing in the aisles, making it impossible to get to our seats. The tourists (our international foursome and 6 Israelis) were met with glares and stares as we got on the bus. We squashed ourselves into our seats with our sleeping bags, llama blankets Daniel had bought in Uyuni and gloves and hats, and braced ourselves for a long night as our rickety bus spat off into the darkness.

We were not disappointed. The bus broke down every hour, on the hour, with the drivers (there were 4, stuffed into the cab of the bus and all definitely under the age of 20) scurrying out into the darkness, knocking on random peoples’ doors in the dead of night to ask for water, petrol or whatever else our wounded bus needed. The bus was freezing cold and we couldn’t decipher what terrain we were trundling over – salt flats, dirt, what felt like huge rock fields – all in all, not a smooth ride.

I will say that the stars in the Bolivian desert were brighter than anything I had ever seen (including San Pedro), and sat so low that it felt as though I could reach through a cracked window and touch them. Southern hemisphere constellations are so different from what we see up north that it was almost possible to forget the baby drooling on my hair, the freezing cold of the bus and the nauseating ride to glimpse an unobstructed view. Almost.

Our bus trundled on, making seemingly random stops in the Bolivian countryside and picking up more and more passengers (despite there being no seats empty to begin with). At the longer stops, Daniel would get off the bus and stand guard near the luggage compartment (we heard many a story about someone having their pack taken at a stop along the way) until we hit Ororo at 5am (!!!) and we were told we had to get off the bus in order to get to La Paz. Now keep in mind that we bought our tickets having been told the bus was direct (yet another lie!), and that we were all trying to doze off and get a few minutes of sleep. And thus, total chaos: struggling to get off the bus, trying to figure out why we were forbidden to take our tickets back in order to board the second one, trying to figure out what bus to board when there was no light and several buses and make sure no one took our packs. We got on bus number 2 toward La Paz (itself stopping every 10 minutes to pick up random passengers), bundled up yet again, resolving to check into a more luxurious hotel after a bus ride like this. Of course, our ability to do so made the stark poverty of Bolivia even more evident – to the rest of the passengers, this night bus was just like any other.

And you would think that would be it. But no – entering into the utter insanity of La Paz (minibuses fighting for space on the narrow road, people walking between cars without looking to see if they would make it in one piece, dogs running around aimlessly, diesel buses spewing black smoke into the sky) – our driver decided to push his luck, cross a line at a traffic light and consequently get into a screaming match with a cop. Watching the whole thing unravel was astounding, especially since we were actually blocking the road in all directions at this point, people outside were yelling at the bus and cars were driving off the road to get by. But when the cop boarded the bus and the whole bus (minus us touristas, of course) broke out into a chorus of “pig!! fool!!!” at the top of their lungs, we all just stared at each other in awe.

What a way to enter La Paz.

The driver bribed the first cop, then drove to a second one (still tailed by the first) and HE got on the bus, and cop 2 was clearly a supervisor, since he gave the money back, patted our driver on the head and got off the bus. It was absolutely surreal.

The International Foursome at the salt flats (guess who got sunburned THAT day?): 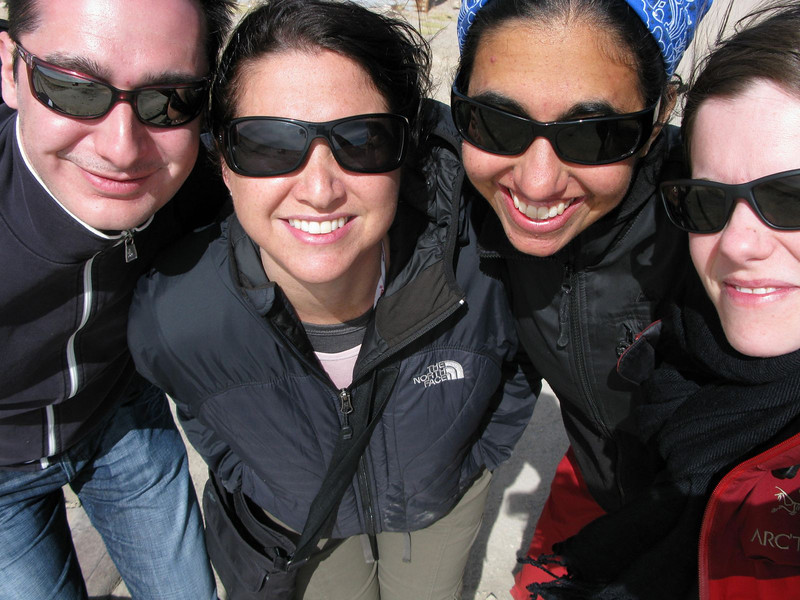 We pulled into the terminal and picked up our filthy packs. The backpacks that were not locked were clearly rifled through, and one poor Israeli girl had her pack completely destroyed – I think it must have fallen out when we boarded and dragged by the bus…it looked as though it had passed through a shredding machine.

So: if you´ve made it this far, here we are in La Paz, in one piece and staying at the shwanky Radisson Hotel and Convention Center (rooms at this 5 star hotel are 100 a night, divided by the people in the room, and we are happy to splurge). Tomorrow, we head to Cuzco to see Macchu Picchu and the Sacred Valley.

2 thoughts on “Uyuni to La Paz, Bolivia: The Bus Ride from Hell”