With an indefinite amount of hours stretching before us and a train carriage full of foreigners (we were all lumped together, whereas on the other train rides we were scattered throughout the train’s carriages), our exit from Russia and entry into Mongolia actually ended up being a lot of fun. For part 1 of my saga on the Trans Siberian trains, Moscow to Irkutsk, see here.

This is what the border crossing into Mongolia was like.

1pm: We stop at the Russian border and are told we have 3 hours to kill before Russian passport control will make it onto our train carriage (carriage #10) for our exit requirements. We – for this leg of the journey, “we” was Bryce and me, “the Peters” (an Irish diplomat and a British TV reporter both stationed in Moscow who we kept bumping into throughout Siberia), Emma, a tour guide from Oz, 2 German women from Berlin, Raul, a Chilean on vacation for 3 weeks and at least 10 Brits – decide to climb our way over the railroad tracks and down the river at the border’s edge. This seemed like a bright idea until we started to get eaten alive by bugs, but the scenery was definitely picturesque! We hobble – scratching – back toward the train, only to see that most of it is missing: as passport control made its way through the carriages, an engine came and took those carriages away to where customs officials waited (a km down the tracks).

Approaching the border; Me and Lise (from Montreal) at the bug-infested river: 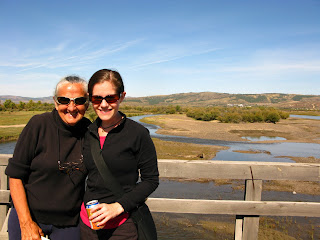 4pm: We are herded back on the train for passport control. This goes on without a hitch and we all tumble out again until the engine comes to drag us to customs.

5pm: Lots of beer is purchased at the local store. And vodka. And rum. And frozen strawberries, as a substitute for Popsicles (Raul’s idea). The Peters serenade us in the afternoon sun. Turns out they are in a band together in Moscow.

Carriage #10 at the Russian Exit point 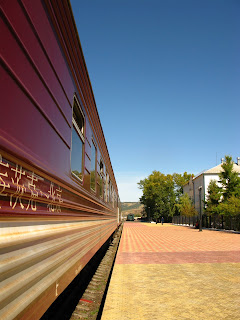 6pm: Customs! Our carriage gets dragged down the tracks and the customs officials and their dogs board the carriage. I stick my head out to see what is going and a huge German Shepard licks my nose. Not satisfied with just me, the Peters tell us that the dog went berserk in their cabin and, once the luggage compartment was opened (with the Peters wondering who planted what in their cabin), the dog proceeded to eat the sausage they had with them for the 2nd part of the journey. Someone needs new training.

7:30pm: We move to the Mongolian side and are stuck on the train, with the toilets locked. Raul, being the Latin Loverist that he is, starts to charm the provenitza (the Russian name for the woman looking after the train carriage, who gives you sheets, hot water, etc and prevents random people from coming into the cabin while you sleep) first with chocolate and then with hugs, until she agrees to put his beer in the fridge to keep it cold. She is by far the grumpiest provenitza we have had on our train trips, growling at anyone who tries to talk to her and rolling her eyes dramatically when she doesn’t understand (which is always, since we don’t speak Russian and she doesn’t speak English). Only the Peters (who do speak Russian) and Raul manage to get a smile out of her.

Mongolian Customs; Biding our time at the border: 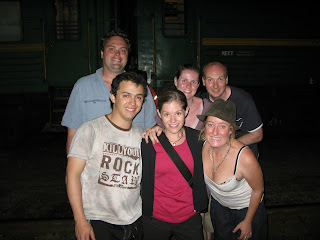 9pm: We are allowed off the train to pee at the Mongolian border. We’re all hungry, so we buy dumplings from a woman selling them out of a water cistern. 10 cents each. And delicious.

9:30pm: Still waiting for our train (the “train” thus far consists of our Carriage #10 and an engine), Bryce and the Peters jokingly try and push our carriage toward the other train at the station. The provenitza loses it, screaming at us in Russian and motioning vigorously for us to follow her away from the tracks. Next thing we know, our carriage is being pulled away, and the provenitza is laughing her ass off. This was the only time I saw her laugh in the 2 days we spent with her! After a silent, tense 5 minutes of us wondering when the train will come back, it reappears.

11pm: The samovar warms up again and we all have noodle soups for dinner:

12am: Raul starts to show us movies on his Asus EEE PC.

12:30am: We are banished to the sliver of “smoking space” between the cars because everyone else in our carriage is asleep.

1am: The Peters convince Raul, who has consumed a good bit of rum at this point, that there is “nothing like” skipping down the train’s hallway while it is at full speed. Much skipping ensues.

2am: I go to bed, to the hop-hop-hop sound of Raul skipping up and down the hallway.

5am: Rude awakening by our provenitza, who is literally dragging us out of bed by tearing the sheets out from under us.

Final Tally:
Arrival at Russian border (to exit the country): 1pm
Russian Exit Passport control finally makes it on our train: 4pm
We move to Russian Exit Customs control (and dogs): 6pm
Train leaves for the Mongolian border: 7:30pm
Mongolian passport control: 8pm
Get passport back from Mongolian officials and get to pee: 9pm
Depart for Mongolia: 10pm.