After a wonderful 3 weeks in Australia catching up with old friends, drinking far too much Barossa Valley wine and letting my feet heal, I flew back to Bali to conquer my 2nd birthday volcano on the eve of my birthday. Having no real plans in Bali until the 15th, I got in touch with Jonny B., who I initially met in Manila and then in Banaue and then in El Nido, and now in Kuta.

Jonny is one of those quintessential, intransigent budget travellers who will hunt for a room he believes is of good value before hunkering down. His tireless prowling usually worked to my advantage, as he often arrived in a new location a few days before me, and I was able to shamelessly piggyback on his hard work. In Kuta, Bali’s messy, loud version of South Beach, I had a very cheap room waiting for me upon arrival.

It is high season in Bali and throngs of people combed the streets every day and well into the night searching for somewhere to stay. Luckily for me, Jonny came to the rescue and reserved me a place in his hotel. And since I had convinced Allen, who I initially met on Rinjani  (he who had kindly waited for me to limp up and down the mountain), to come and climb Mount Agung before he headed back home to Ireland, I paid-it-forward by getting him a room too.

The three of us spent our mornings eating at Bamboo Corner** for good, cheap Indonesian food, and watched the hordes of scantily clad tourists stumble by at night on their way to the thumping, teeming Kuta clubs. Jonny left after 3 days, bound for Oz – and likely to suffer some serious sticker shock with their prices upon arrival – and Allen and I booked a trip for Agung.

Looming over Bali, Gunung Agung is a semi-active volcano, accessible by two main routes: via Pura Besakih, the intricate, sprawling Balinese “Mother Temple” or Pura Pasar Agung, a smaller temple nestled into Agung’s slopes. Via Besakih, the trip takes several hours longer as the trail is riddled with switchbacks and takes a winding route. In contrast, Pura Pasar is a straight shot up and down the holy mountain and notoriously hard on the knees. We climbed via Besakih.

The climb began in the black net of night from the temple, with only our headlamps to guide the way. Past the concrete steps of the temple and into the wet jungle, our guide stopped to perform a ceremony on the trail to balance good and bad spirits around us and to bless our climb. The first half of the trail was very well demarcated, consisting of a narrow, very steep path dug into the earth. We looped around desolate trees that had fallen on the path, climbed over thick roots and brush and trudged onwards and upwards. I was unable to see the summit looming above us, as it was still obfuscated by the thick darkness. The second part of the climb was surreal and otherworldly, and often harrowing.

The claustrophobic jungle path was replaced by the pale grey of volcanic rock when we clambered above the timberline at 3am. A sliver of moon began to peek over the crater rim and I could see the summit silhouetted against the sky in the distance. At this point, I was not doing great. My toes were faring well, but my ankle was decidedly not, the vestiges of having torn it apart over a year ago still causing me problems. As with Rinjani, I went as quickly as I could – and that’s to say not quick at all. Though Allen knew I took awhile (he did see me lag behind on Rinjani) I doubt he expected the climb to be this slow.

Our guide was not doing great either: he had a serious cold and coughed jaggedly for the entire climb, propping himself up on his walking stick while he hacked away. Allen, who makes a habit of spending weeks alone in the Himalayas, easily scampered ahead with the guide, then stopped and waited for me to painstakingly reach them. The guide would fall asleep on a rock until I arrived. It was a very drawn out ascent.

Around 4am, the volcanic moonscape shifted and we reached the end of an hour-long trek up a scree slope, which was replaced by larger chunks of volcanic rock. At this point, we were headed straight up, hauling ourselves up the rock face with our hands. My mind was stuck in an infinite loop of two thoughts: how much getting up hurt, and how hard it was going to be to get down.

Finally at 5am, we made it to the summit, just as the sun was beginning to streak through the clouds: Whatever pain I was in, I think our guide was feeling worse. I felt terrible for him, and wished he had canceled or sent someone who would have been less in pain:

Our guide was not doing great either: he had a serious cold and coughed jaggedly for the entire climb, propping himself up on his walking stick while he hacked away. Allen, who makes a habit of spending weeks alone in the Himalayas, easily scampered ahead with the guide, then stopped and waited for me to painstakingly reach them. The guide would fall asleep on a rock until I arrived. It was a very drawn out ascent.

Gimpy leg and all, I made it to the top. One of the most profoundly satisfying, symmetrical aspects of the climb was viewing Rinjani from the top, having climbed it only 3 weeks prior.

And what a sunrise it was:

You can see Rinjani in the distance too! 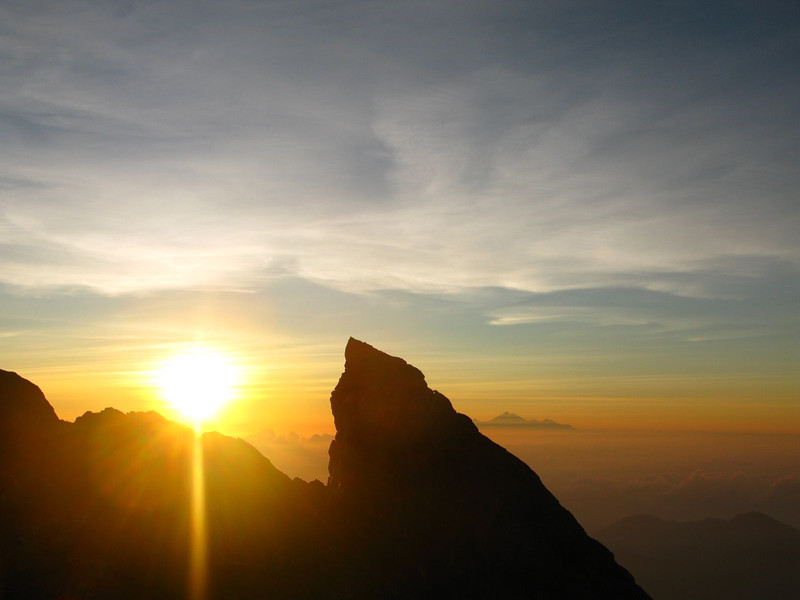 A great reflection of Agung on its own slopes, as taken from the top: 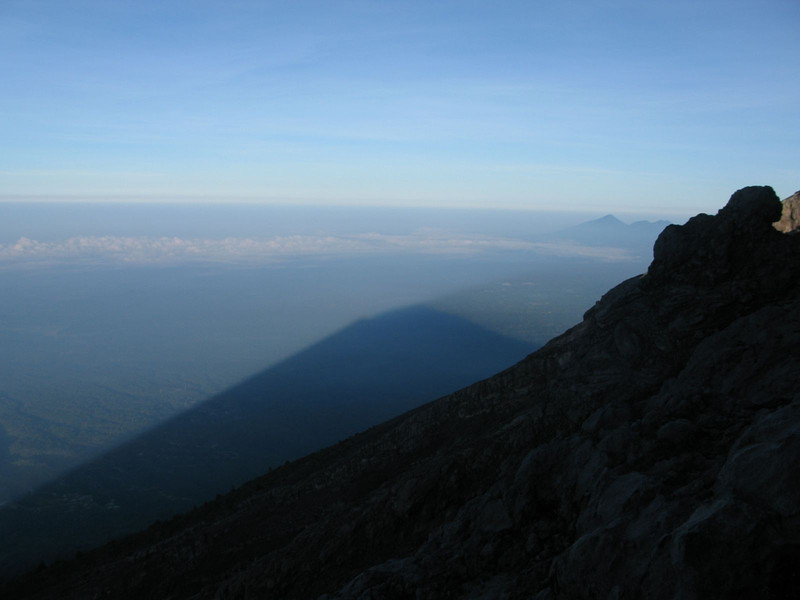 But it was a long, long way down:

The descent took 3 hours longer than the climb, and was every bit as ugly as anticipated. Our guide took to running far ahead and falling asleep while I limped down the slope. While I knew Agung would be hard on my ankle, I didn’t realize the trail was more technical and much steeper than Rinjani’s. However, I’ve learnt my lesson from getting sick on the road and not listening to what my body is telling me: I won’t be doing Gunung Bromo. While 2 for 30 doesn’t have the same ring, I am still happy to have made it up – and down – Agung on my birthday, keeping with tradition.

Volcano Type: Stratovolcano
Climb: 3,142m
Guide: Name unknown, as he was too sick to speak. Almost collapsed in the parking lot in a fit of coughing post climb. A trouper.
Times I thought I would fall off the volcano: Approximately 7.
Casualties: the skin on my left hand, my right ankle, my hopes of climbing my 3rd volcano.