3 for 30 Part One: Gunung Rinjani, Indonesia

There are two moments of supreme exultation when I trek up a mountain: the first when I realize that I have made it above the tree line, and the second when I get a first glimpse of the summit from the trail. No matter how many mountains I climb, the former is exhilarating; to see the carpet of white clouds wafting below me, a testament to how far I came to make it that far, is a wonderful feeling. The problem with the latter is that my joy quickly turns to despair since – in the state I am usually in close to the top – it appears that the summit is drifting farther away, with no end in sight. My Mount Rinjani climb comprised all three of those sentiments, but the feeling of never making it to the top was compounded by the fact that I was shredding my feet to bits as I was trekking, and each step brought a searing pain to my heels and toes.

After months and months of wearing flip flops, my feet have changed markedly. I would venture that I can fit a whole baby toe in the new space between my first and second toes, and that my feet have flattened out considerably. As a result, the boots that used to fit me perfectly in February 2008 are too small and – as I’ve learnt – not something I ought to hike in. As stubborn as I am, and having already made it several kilometres up before my feet starting to die a slow, painful death, I decided to keep going. As a result, I am currently in Australia nursing bandaged heels and dinosaur toes – but I did make it to the top! 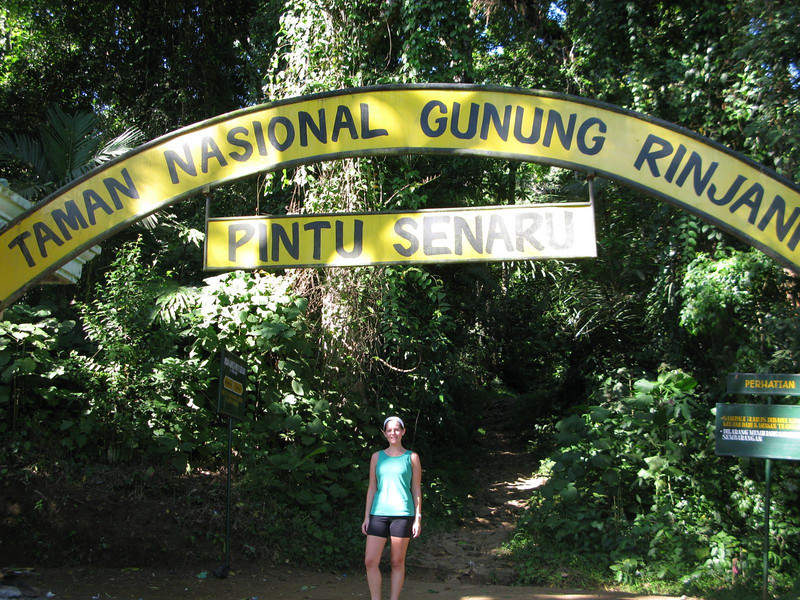 The climb was beautiful, and I did most of it alone. Since I tore my ankle apart last year, I’ve struggled to climb at the speeds I used to, and so I’ve taken to going at my own (usually snail-like) pace to minimize the impact on my tendons. In this case, my ego took a beating when I was lapped by a chain-smoking porter in flip-flops – twice. Notwithstanding my pride, solitary climbing usually means that I can easily lose myself in my surroundings and the sound of my breath as I trek up the mountain, and Rinjani was no exception. It is worth mentioning, however, that Allen (an Irishman) and Germain (a Frenchman) both took the time to wait for me at each rest stop, which I appreciated, especially since neither of them were in my trekking group. Thanks guys! 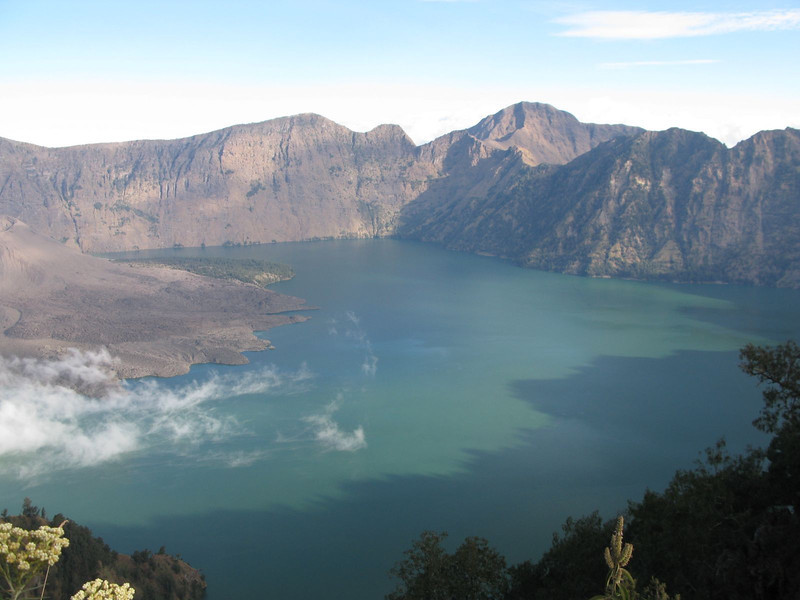 The trail consisted of Base Camp I, Base Camp ‘Extra (wtf?), Base Camp II, Base Camp III, and “You’re almost at the summit and can see it so we’ll put a little hut for you to rest at whilst you contemplate how you’re going to get there”, aka the Pity Hut. After the Pity Hut, the trail stopped and there was a solid 2 kilometres of sand/small rocks to get to the crater rim – which did not do my feet any favours, as I slid two paces back for every one pace I took. Once at the lip of the crater, my exhaustion turned to awe. Peering into caldera at the turquoise Segara Anak, with Gunung Baru smoking furiously in the middle, the climb was instantly worthwhile.

We pitched our village of tents precariously, tufted to the side of the crater rim. As the sun sank below Gunung Agung and the Gili Islands on one side of our camp, the molten lava pouring out of Baru’s crater became more visible without the bright light. It was a case of solid sensory overload and we each alternated from one side of camp to the other in order to capture the many colours of dusk against the water below and atop the crater. The wind blew furiously all night, and was joined by the sounds of Baru exploding just below us. Thanks to Klaas, a generous Dutchman with a huge tripod, I was able to get some pictures of Baru spitting fire after the sun went down.

Some photos of my Gunung Rinjani climb:

1) Summit view from the crater rim, where we camped: 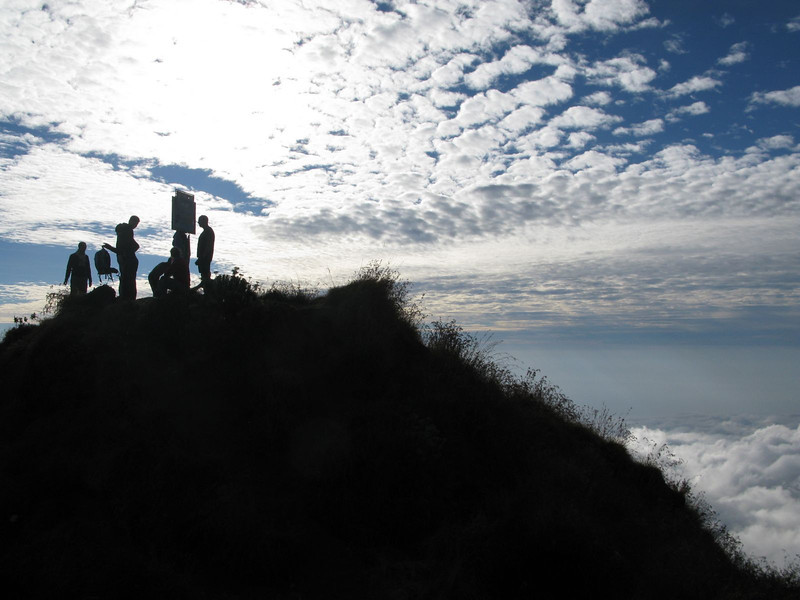 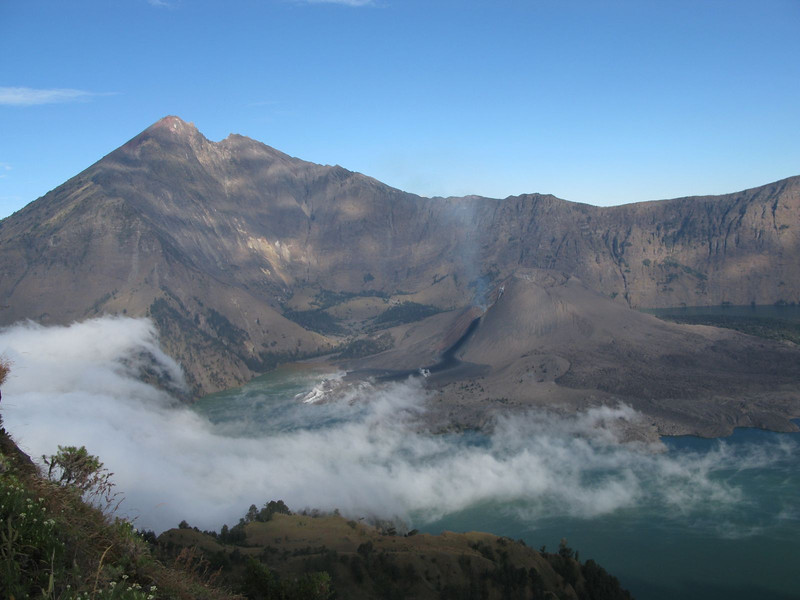 2) Tents were haphazardly set up on the hills of the crater itself: 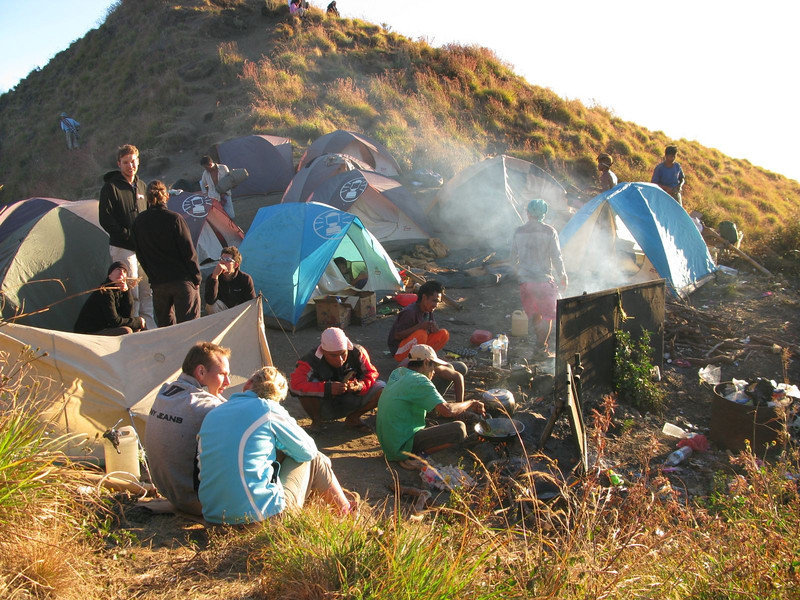 3) The sun set into the sea behind Lombok, with a perfect view of Gunung Agung, my next conquest: 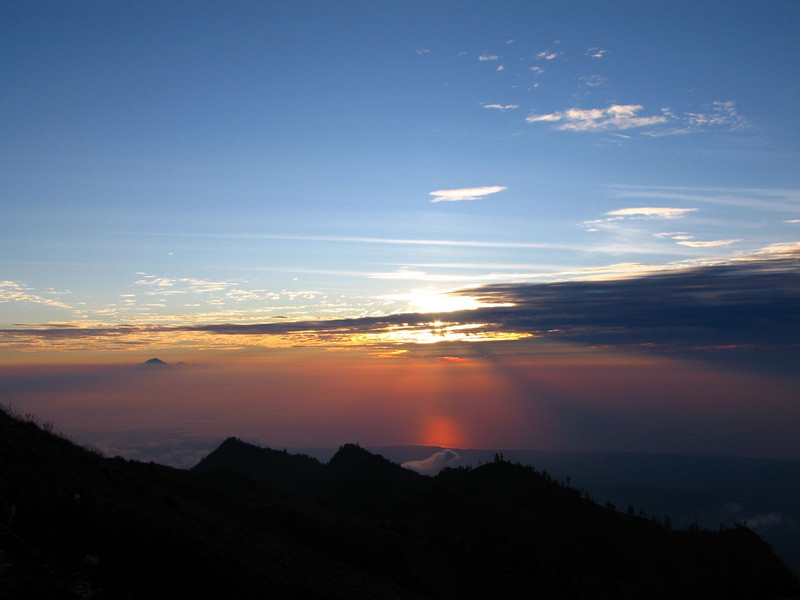 4) And all night, the lava flowed:

Amazing, if painful, beginning to my 30th birthday climb extravaganza. Hopefully my feet will recover enough to do mountain #2!

Volcano Type: Stratovolcano
Climb: Approx. to 2300m (summit, unassailable due to the eruption, is at 3736m)
Guide: Bass, the grumpiest, surliest guide I have ever had.
Earthquakes: 1
Flowing, exploding lava: All night long (insert the song melody here too).
Casualties: 2 toenails, the skin on the back of my heels, my pride.

EPILOGUE: I made it to Gunung Agung too!

5 thoughts on “3 for 30 Part One: Gunung Rinjani, Indonesia”