My Safety Whistle: Worth its Weight in Gold

In the course of many months of travel, I have switched up my travel gear several times. But one of the most important things I brought turned out to be one of the smallest: my safety whistle.

I managed to go through several daypacks on this trip so far. I was looking for something big enough for multi-day treks, but small enough to traipse around with when exploring a new city. Also, I had to dispose of one after a goat peed on it; the smell would not wash out, no matter what I did. Hazards of long-term travel, no doubt.

In Australia, I settled upon a daybag backpack that came with a nice mesh backpanel (so a sweaty back didn’t automatically translate to a sweaty pack), and a bonus safety whistle on the chest strap.

While not a factor in my purchase, that whistle proved invaluable in the coming months.

Why My Safety Whistle Was Indispensable on my Travels

Safety Whistle Save 1 – Middle of the Irawaddy River, 2009

When our boat died in the middle of the Irrawaddy river, sputtering its last, diesel-fueled breath somewhere between Sinbo and Bhamo, we were (so to speak) up a creek without a paddle. As in, the boat had no oars, no lifejackets and dusk was upon us.

Oh, and we were smack in the middle of the largest river in Burma. Time trickled by. Our group was mostly Burmese people, with a few of us tourists. The mood started out optimistic once the engine croaked, but as the last rays of sun disappeared behind the banks of the river, so did any positive thoughts.

Through the English-speaking guide of a photojournalist, we tried to figure out what our options were.

It turns out, we didn’t really have any.

For hours, we drifted in inky silence without a clue about what to do next, the captain sitting and glaring at the motor in disgust.

Eventually, I heard the motor of a boat in the distance and warned everyone to cover their ears.

Inhaling deeply, I sounded the whistle like there was no tomorrow.

The boat came toward us, the two captains conversed, and we were towed to shore. Carrying our packs, exhausted and waterlogged, we trekked to the other side of the island, then over a hill and then down to the bay facing Bhamo.

Another boat picked us up and took us to Bhamo itself, where we checked into the one hotel licensed to house foreigners and fell into a deep sleep.

[Note: You might be asking yourselves why we didn’t call anyone for help using a mobile. This is Burma before the 2015 elections: permanent SIM cards were $1000 and required a permit. None of the passengers had one, and none of the tourists had invested in a $25 temporary SIM.]

In my post about climbing Mount Zwegabin, I mentioned that I was chased by a pack of wild monkeys.

After a wrestling match over my rolled up blanket — terrifying at the time, but with a vague understanding that one day soon it would make for a ridiculous story if they didn’t push me off the mountain — I frantically ran up several more stairs before realizing that resistance was futile.

A short person with short legs cannot outrun a pack of monkeys up innumerable crumbling stairs on a Burmese mountain. It was as simple as that.

Gasping for breath and watching several of the bolder monkeys creep toward me, teeth bared, my eye caught the bright orange whistle of my safety whistle.

Figuring I had nothing to lose, I inhaled deeply and pushed out the air as hard as I could, scaring those monkeys with a sound they’d likely never heard before.

They yelped, they scattered. I kept moving as quickly as possible, looking behind me in a bit of a panic. But the monkeys had all disappeared.

Not pictured: the monkeys. Or me running awkwardly up these stairs.

One of the many great things about Thailand is its seemingly innumerable transportation options to get from A to B.

I opted to take a night train from Bangkok to Chiang Mai, thinking it would be a new experiences from my customary overnight bus ride.

What I didn’t think was that I would get stuck in the bathroom in the middle of the night, with nothing but my daypack to keep me company.

Sure enough, it did.

Within no time, someone came to open the door, already unlocked but completely wedged on the wrong sliding track.

Humiliating? Definitely. But not as much as it would have been to spend the night in the toilet. 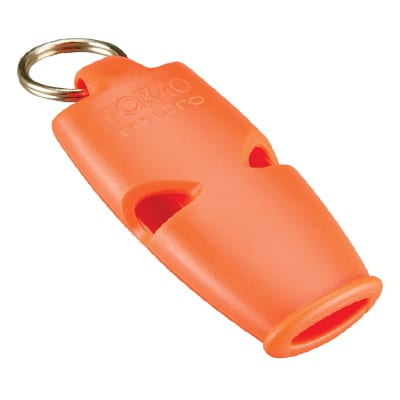 Oh HAI safety whistle! Thanks for being there for me.

What’s the lesson in all this? You can agonize about what to pack and what gear to bring, but don’t forget to add one tiny but powerful whistle to your list. If you want one with a keychain ring, opt for Whistle for Life’s marine whistle. Each are worth their weight in gold.