After nine months of working so hard to stay sealed, and marking incredible progress with you along the way, I have releaked. When working on getting sealed, I explained here and on social media that the stakes were quite high, as a wrong move could re open the CSF leak that took so many patches to seal.

For many, the body can withstand the uncertainties of daily movement as the dura slowly heals. For others, the connective tissue is weaker or faulty, or they have bone spurs or cysts involved, and small movements carry big risks. Reaching for something too aggressively. Doing laundry. Picking something up off the floor. (One woman’s complicated case study here, with causes of leaks here.)

To maximize my chances of staying sealed, I limited my movements during recovery. I slowly reintroduced actions that put slight traction on the dura – I opened the oven, or drawers, or slowly climbed up hills. But I used a picker-upper device to get anything on the floor, and didn’t lift anything over a few pounds. I was patient, but vigilant.

What happened was a whimper, and not a bang. I simply sat down. And it seems that I sat the wrong way, stretching my hamstrings and dura in a way that it was not ready for. I didn’t notice much at first, except the taste of CSF in my throat occasionally. I texted my doctor about it but with no other obvious symptoms of a leak again, I took it easy and waited.

Days later, I walked to meet friends for dinner and I felt crazy numbness and burning at the leak site, that had spread all over my back and thighs by the time I arrived.

I’ve been back in bed over since.

I have about 20-30 seconds of “uptime” before that nauseatingly familiar “brain sag” feeling starts. Along with it, dizziness, neck pain, nerve pain and back pain. Familiar tortures that had mostly disappeared when I was sealed.

My body is in way healthier shape than last year after a strong focus on eating well and keeping my mind calm. I hoped that the improvement would mean I would be able to seal up the leak again without intervention.

I have spent two full weeks on strict bedrest, even eating lying down, following the protocol for sealing – flat on my back, no pillow, waiting. I started back on the meditation schedule I went to following patch 4. Friends came and brought supplies.

It has been over two weeks and so far no change. I still DO have hope that my body can seal up – my overall health has improved so much this year. But I didn’t want to delay in calling Duke due to their very busy schedule. They have said that they may be able to fit me in for December.

Those who read my prior post on how I went into anaphylaxis during round four of patching at Duke know that I cannot get glue patching again.

I did ask my doctor.

Me: what if you premedicate me with steroids and Benadryl to temper a reaction?

Him: no really Jodi, that was NOT mild anaphylaxis. It was the real deal.

Me: so that’s a no on premedicating?

This means that we can try my own blood, at the same sites as the last round of patching that did work (there were several targeted patches within that round). As with patching generally, it requires the body to kick in and create the scar tissues needed to seal up the leak in the dura.

Until then, I will keep hope that my body may create its own seal.

To state the obvious: this is a real mind-fuck. I worked incredibly hard to stay sealed, to feel vaguely human again. It feels bewildering, and oh so unjust, that climbing Mount Royal weekly was fine but sitting down the wrong way unspooled my healing. And there’s a “PTSD Groundhog Day” aspect to it as well. Yet ANOTHER October on bedrest, anticipating another December at Duke.

The silver lining is that I know the beast I’m working with, and there is no panic. Last autumn there was a lot of panic. This time, the symptoms are familiar and I know they all went away when I got sealed. I now know where to go for treatment, and how to maximize my chances of healing.

But I am heartbroken, really and truly, to be back here.

Regardless, I am doing what I said in my original post. Focusing on the progress I DID make. On the gratitude of being upright for those months of waking again. On this army of help and love I’ve been gifted around the world.

Yes, there are many people who don’t get sealed, but many more who do. And I have a doctor who has my back (literally, in December, and figuratively overall), and who patches people every day in his work.

And when I get too sad, I have Zack the cat at my side here, to keep me smiling. 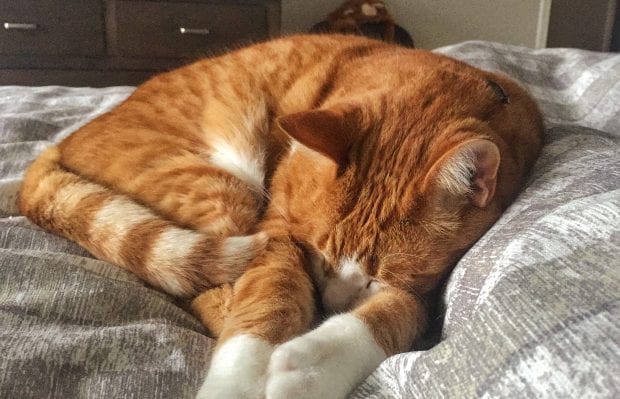 I wanted to update you with this news, and say thank you once again for the incredible grace, love, and compassion you’ve all shown me during the last year of ups and downs. Many of you have already reached out asking how you can best support me in this time. I’m not sure I know yet, but I appreciate the question and will think more about how you can help.

As usual, more frequent updates can be found on Instagram and Facebook on the Legal Nomads pages there, as it’s easier for me than writing on WordPress via mobile.

With love from Montreal,