A Short Guide to Eating in Austin

I was only in Austin for a short 10 days, so this opinionated list of where to stuff your face is influenced by two important factors: (1) where my friends like to stuff their faces, and (2) where I can find gluten free options, given that I am a celiac.

While it is true that in North America awareness of celiac is on the rise, I have to explain that I have the disease and that I am not being trendy. Each city is its own beast when it comes to how understanding the restaurants are when you visit. I realize it must be frustrating for the chefs, but unfortunately for me it is not a choice. I always try to be a respectful and apologetic as possible for asking to modify a dish.

Denver was great, Austin was mostly great, Los Angeles was terrible and people rolled their eyes at me when I asked to please even check the mayo for wheat. YMMV.

Where to Eat in Austin (with Gluten Free Options)

As with my Barcelona food guide, these are restaurants that do not specialize in gluten free food but have the ability to account for it. As I travel the goal remains to eat with others in restaurants where I can (hopefully without too much inconvenience to the chef) modify the meal as needed to not throw up on anyone.

Get Your Gluten Free BBQ On in Austin

For celiacs: their BBQ is all gluten-free, including the sides like grits and the slaw. The bread is not, of course, nor is the pie. Try the barbacoa — it blew my mind.

Italian Food and Beer in an Outdoor Setting

For celiacs: their bolognese sauce with added Italian sausage was incredibly tasty. Served over strips of zucchini “pasta”, I barely missed the noodles themselves.

Thin Crust Pizza That Made me Happy

For celiacs: I went to the Brick oven on 35th, but there is another option in the downtown core. Both serve GF pizza. I realize that beggars can’t be choosers when it comes to gluten-free dough, but having tried quite a few celiac-friendly pizzas in the USA this month, I can confirm that this was my favourite. It was thin and crunchy, but not sweet.

Note: friends highly recommended Via313, but sadly I did not get a chance to try it.

For celiacs: I hadn’t tried grits before coming to Austin, which appalled my friends from America’s South. I made up for it at the BBQ joint, but I wanted to provide a second option for corny deliciousness, one that comes with a hearty brunch menu sourced from local farms. Much of the brunch menu involves wheat, but I promise you won’t notice as you are chowing down on your bacon-filled bowl of corn and shrimp, which comes with an egg. 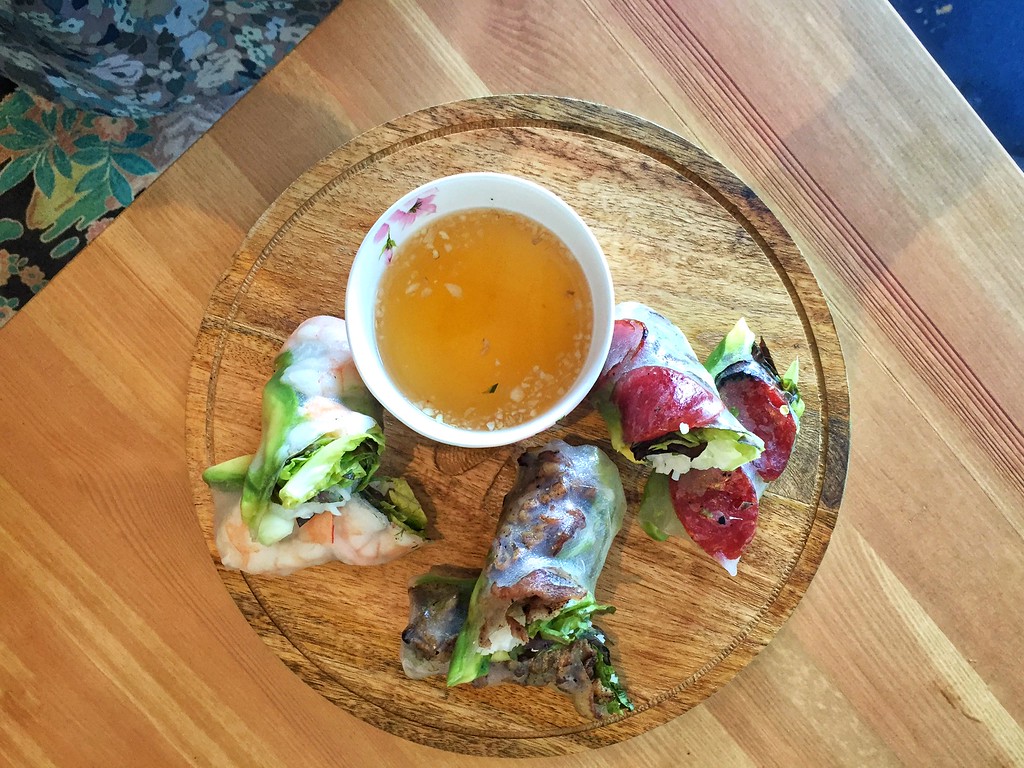 I devoted a whole post to LuLuB’s, so it might seem obvious that it’s my pick for Vietnamese food in town! There is also Tam Deli and Cafe, which came highly recommended, but the week I arrived the owners retired and friends who have visited have said the new chef is still getting his feel for the kitchen.

[Sadly LuLuB’s is now closed. For a great Vietnamese experience in Austin, try Tan My instead. Facebook page is here, Menu is here. Tan My offers rich pho broths, com suon and my fave from my years in Saigon, hu tieu nam vang.

For those who are fine with wheat, try the nam tok moo, waterfall pork and the beef Penang curry. The pad siew can be made with tamari here, safe for gluten free eaters. Cross contamination a risk because of the small kitchen, but they were willing to wash out of the wok prior to making my pad siew, and I did not get sick.

Note: another recommendation was Thai Fresh, but I did not make it there to try it out. Lots of GF options.

I know that people love Uchi (see below for info) but I am posting about Piranha instead for one main reason in addition to their fresh fish: they not only have gluten-free soy sauce, but if you tell them you are celiac they also provide you with freshly-grated wasabi for your meal, a rarity in North America.

Their happy hour is the best bet for those on a budget, as they do not have a lunch menu.

I enjoyed the sushi bar as a place to sit, and if you do go please try their yellowtail sashimi as it was incredibly delicious.

My friends took me for Tex Mex so that I could compare and contrast with my time in Mexico. “You need to try our version of Mexican eats, Jodi!”

According to this history of Tex-Mex food, the term and its popularity began in the 1900s:

“Adapted from Tejano home cooking, Tex-Mex cuisine made its way to a larger audience for the first time in San Antonio in the 1880s, largely thanks to the cheap, delicious food dished out by a group of women known as the “chili queens” in the city’s plazas. A steaming bowl of chili con carne—now one of Tex-Mex’s signature dishes—alongside bread and a glass of water went for a dime in those days, drawing crowds of locals and tourists alike. The growing fame of the chili queens helped San Antonio establish its enduring reputation as the capital of Tex-Mex cuisine.”

While tasty, it was a lot heavier than the Mexican food I am used to, and the portions were enormous! I did appreciate that the waitress was familiar with celiac disease, and was able to guide us accordingly as we ordered. I can see how the food evolved into this hybrid, and I’m very glad I tried it, but I’ll stick to teeny tacos for now. (Don’t hate me, Texans!)

Geraldine’s at the Van Zandt hotel

The restaurant was packed, but that meant we simply skirted the tables and went straight for the bar. Outside, by the pool, and with a great view of the city, I recommend it for those arriving to town and wanting a charming way to kick off the time in town.

I hosted my reader meetup at the Austin Beer Garden Brewing Company and it was a fun venue with live music, food, and a good selection of beers for my gluten-filled friends. For me, great ciders to choose from. Note for celiacs: the GF pizza there is also thin-crust but they were clear that it was a contaminated kitchen so I did not order it.

For those who want to eat at 100% gluten free establishments, here’s where I’d recommend:

Other recommendations from friends that I did not get to during my short visit:

I wish I had more time to visit Austin, but as with every other place I’ve visited I tried to try as much food as my stomach would allow. Thankful for friends who zipped me around town and shared their faves along the way.