How many French wind engineers does it take to find the Great Wall after midnight?

Just one, and his name is Hubert.

We tried to camp on the Great Wall two weekends in a row, mainly because our first attempt had us camping at 1am on a lovely plateau. This was because we couldn’t find the wall anywhere.  I know losing a giant monument that is viewable from space seems unlikely, but I assure you that we were unable to locate it during our hike. When we woke up the next day, we realized that we had climbed the wrong mountain ridge. This is what happens when you try to find a giant wall in the dark, without a French wind engineer named Hubert.

This is also what happens when the only directions we were given were to hire a van to take us to “the place with all the fish restaurants.” I suppose our predicament wasn’t too much of a surprise.

We did find the wall the next day, but it was close to dusk when we started our almost vertical climb, so we all resolved to come back the next week since we now knew where the right trailhead began.

(Illegally) Camping on the Great Wall of China

Come the next Friday, we had a patchwork of 13 people from Switzerland, France, Canada, Hong Kong, the Netherlands and the USA, including Hubert. My friend Karim told us to meet at “7pm sharp”, meaning we only got out on the 730pm bus to Huai Rou, with one of the group straggling behind on the non-express bus.

In Huai Rou, we ate dinner at the same noodle and shwar place as the week before, and hired 2 vans to take us out to where Hubert said the trail began. Yes, there were fish restaurants.

By 11pm, we had arrived at the gate, only to find out that the main road was closed unless we each paid 20 RMB. Karim and Hubert were outraged, as entry was free only a month before. Solution? The vans took us 50m down the road to a cornfield, and we all got out, turned off our headlamps and crept past the gate in the pitch blackness. Upon hearing a car rattling down the road toward the gate, all 13 of us lept into the shrubbery in a spontaneous act of psychic coordination. The car passed, we all started breathing again and tiptoed on.

Once past the gate, the headlamps came out and our voices rose and fell as we made our way past more cornfields and farms, turning off at a small path that lead us up to a village, after which Hubert believed the trail began. We met two (drunk) villagers who urged us to continue straight on noting that there were “no breaks in the trail”. Sure thing. A few meters later, we stumbled on the first of many divergences in the path, with each “Y” resulting in a heated discussion from the Wind Engineers about what to do next. By midnight, Hubert and Karim decided to double back to the main road, believing we had turned off too early. At this point, I was skeptical that I would make it to the wall at all.

We passed a huge signpost reminding us not to light any fires, not noticing that – etched into the side of the post – was an arrow with a note saying “Great Wall that-a-way” (the signs were in Mandarin, so this was the translation I received).

After arriving at the ruins of an old farmhouse that Karim and Hubert had never laid eyes on before, they realized their mistake and turned us back to the sign post, where we found the etching and all cheered: we were on the right path, finally!

A wide, winding path led from the main road to a smaller trail, ending at the wall itself. By the time we arrived at the base of the wall, it was past 2am, and we still needed to pick our way through the rubble and figure out where to camp. I was treated to a cheerful “Jodi’s on the wall! Jodi’s on the wall!” song from the Wind Engineers, to the tune of “100 bottles of beer on the wall.”

My family asked why this part of the wall was closed to the public. It is because it is not as well preserved or restored as the other portions, and much of the dauntingly steep climb is replete with shrubs, rubble and loosened stones. To climb on the wall at Jiankou means climbing on your hands and knees and hoping no rocks give way, especially interesting when you are carrying a pack with a sleeping bag, tent and food. Several tourists have fallen to their death here, and one of Joel’s friends stumbled off the wall a month or so before our attempt, saved by his quick witted friends who grabbed his arms before he could fall any farther. All this to say: yes, we were tired but we couldn’t afford to lose our concentration.

At 3am, we dropped our bags, made a fire on one of the watchtowers and ate some snacks and started drinking Baiju, a Chinese liquor that ranges from 80 to 120 proof, with a taste that leaves much to be desired. But when it’s cold and you’ve just spent the last 5 hours climbing in the dark to find yourself atop a watchtower on one of the most amazing feats of construction, you drink.

By 4am, most of us had scrounged a sleeping spot: me, Brian, Camilla and Joel in a 4 person tent, Jerome, Hubert and Haike scattered around the tent (insulating us from the wind – thanks guys!), and Simon, Benoit, Juliana, Julien, Christophe and Hubert wedged into the watchtower’s nooks and crannies.

Waking up only a few hours later at 7am to take pictures was painful, but well worth it.

Though accounts differ, it is generally believed that the Great Wall of China was built between the 5th century BC, though the early 16th century. The early part of the wall was constructed using compacted earth, and thus the part that we are more familiar with as tourists stems from the Wall Building Redux, under the Ming Dynasty and following the Ming army’s defeat by the Oirats during the Battle of Tumu in 1449.

The wall did deter enemy invasion until the mid 1600s, when the Mongolian soldiers made their way through Shanhaiguan pass and seized Beijing, thereby establishing the Qing dynasty that I referenced in my Mongolia post. It is believed that several million Chinese were killed during its construction, and it is easy to see why: the wall twists and turns on jagged peaks and craggy rocks, thrusting out from the almost vertical mountain peaks. If hiking on the wall was moderately strenuous (in the “don’t fall off and die” kind of way), it is mindboggling to stand on it and think about how many people (and lives) it took to build.

Though a feat of engineering and construction, it is difficult not to think of how desperate the Ming empire must have been to push on in its creation, always looking over its shoulder at the approaching Mongolian empire. However, as Karim said once we hauled ourselves up onto the wall in the dead of night: “Thanks Mongolia, for giving us a great camping trip.”

Despite thousands upon thousands of tourists visiting the wall everyday, very few sneak in past dark and camp in an abandoned watchtower, in the middle of a completely wild, disintegrating part of the wall. China, the Great Wall is known as the “Wall of 10,000 Li”, which roughly translates into the Infinite Wall. And while camping out on the wall at night was a lot of fun, waking up in the morning and doing a small, slow turn – taking in the deep valleys, sharp arrow-shaped peaks and autumn foliage – was the best part of it all. The overwhelming feeling of awe to see the wall stretching “to infinity” before me, as far of the eye can see, will stay with me for a long time.

Our campsite, with some sleeping in a tent, some around the tent (keeping us warm inside) and some opting for snuggling inside the crumbling watchtower itself. We were 13 people in all. 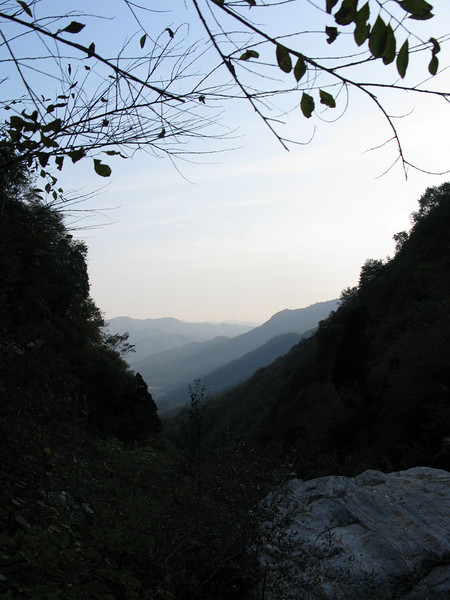 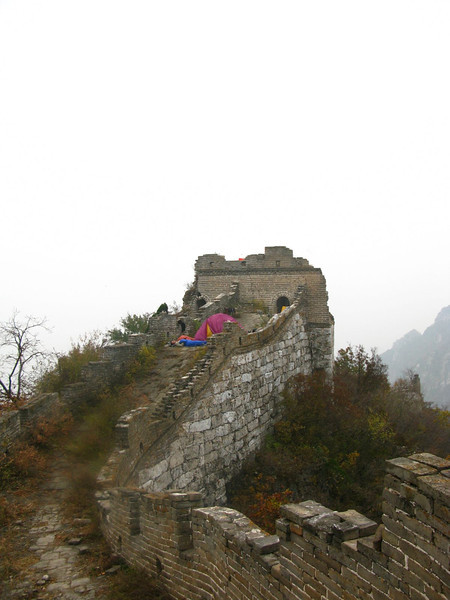 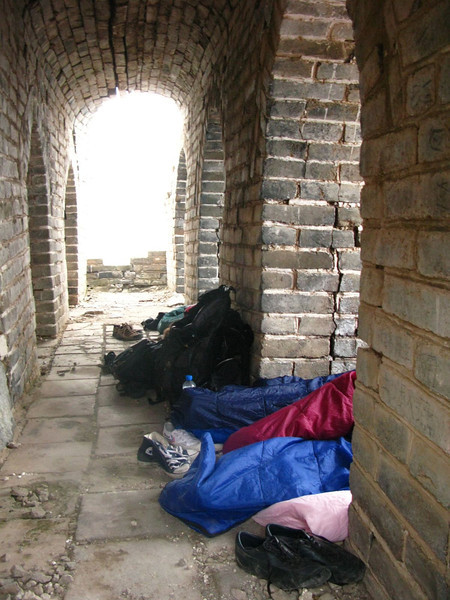 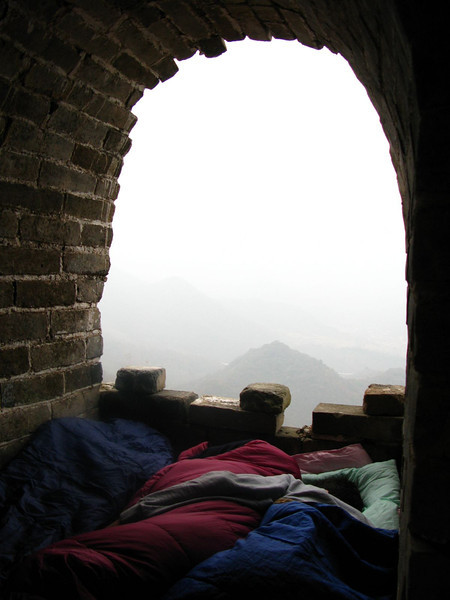 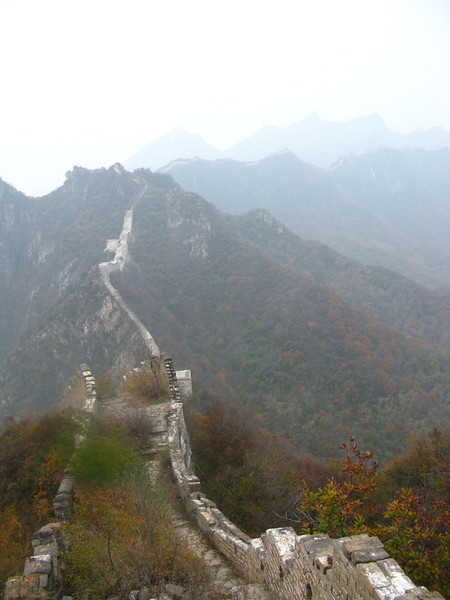 All in all, a great trip but I can’t recommend it to others as people die on this part of the wall all the time. It’s basically rubble and stones, pushed together and falling apart. I’m glad we went but I’d say: you need to do your own research because it’s definitely closed for a reason.