A full 20 minutes after I called ahead to Joel asking when we would arrive at our restaurant for dinner, we finally arrived and locked up our bikes. “One block away?” I asked incredulously. Joel laughed at my confusion. “Jodi, a Beijing block is not the block you are used to!” A block in Joel’s world is the space between one main artery to another. We could have biked for an hour without ever making it “around the block.”

This exchange summarizes quite well my feelings about Beijing. That what I was used to made no sense, but in my confusion was perfect logic for everyone else. Even Joel, who grew up in Montreal, had morphed into a version of himself who thrived in a city that baffled me at the outset. But with some time and an open mind, I let go of these preconceived notions of what was right and wrong and instead fell into the routines of the city, where a block wasn’t a block and mealtimes were every hour of ever day.

After the weeks of train travel overland from Mongolia to Beijing, I found myself in a sea of very different cultures and traditions. Bit by bit, it became less jarring and more joyful. And a full three weeks into my alleged one-week stay in Beijing, I was having trouble deciding when to leave.

I had finally adjusted to the loose ebb and flow of biking around the city. Bikes rule Beijing’s roads the way cats rule its many hutongs: cars cede to you seamlessly, and while they are frustrated, jam packed and immobile, you stream by, buoyed by constant movement.

During the day, clouds of bicycles wait at the traffic lights for the perfect moment to sneak across the intersection before the light has turned. And then at night biking around Beijing became otherworldly – a soft October mist descended upon the city, shrouding the horizon in white fuzzy light and the noisy boulevards were ghostlike, almost empty.

Whizzing by buildings and alleyways, my breath fogging up the chilly night air and heartbeat pounding in my ears, was one of the many highlights of my time in Beijing. To let the city (and its grime and and mist and smog) seep deep into your bloodstream necessarily requires you to bike around incessantly until the chaos and noise and intersection of millions of lives starts to make some sense, starts to meld together into a comprehensive pattern – which is exactly what I did.

When I planned my tentative itinerary, previous  travelers always asked me where the “vacation in the vacation” would be. While I’m certainly not leading the hard life, nonstop movement and adjustment and dirty, crazy sleeping conditions to tend to take their toll, and travelers do tend to burn out if they keep moving without respite. My unexpected 3-week stay in China’s capital was the perfect time to unwind, eat astoundingly well (with the extra pounds to prove it!) and meet a slew of fantastic, multifaceted people. I had initially planned on a 5-day stay, but 5 days bled into a week and then two and finally I forced myself to leave to meet my friend Jared in Thailand before my visa ran out. Falling under Beijing’s spell seems par for the course: when asked when they had arrived in the city, most expats answered “well, I visited here 3 years ago and haven’t left since.”

Of course, spending time in a big city depends in large part on the value of your tour guide. It’s easy to become acquainted with a small town and its local inhabitants, and usually possible to get invited in to one of their houses for dinner. In contrast, a city’s impassive boulevards and huge, concrete and glass facades often feel easily navigable, but don’t usually deliver the goods: anyone can follow a guidebook or map around a city’s major sites without even getting a genuine notion of pulse of the place.

My generous (with his time and futon) tour guide, and the reason why my time there was so much fun, was Joel, an old friend from Montreal. A chef by training, with a brain that never idles, Joel’s passion for travel (and the food that each place thrives on) is contagious, and he dives headfirst into a new place with vigor. Beijing is no exception.

Joel founded The Orchid Guesthouse in Beijing, and is an expert in tea, having spent many of his years in China learning about it and selling premium teas. I spent many of my days at Maliandao, Beijing’s tea district, sampling different types of tea with Joel’s business partner Luoping and savouring the different smells and tastes of China’s many camellia sinensis offerings. It was fascinating and a whole new way of looking at tea, and it opened my eyes to Chinese tea culture and gongfu tea ceremonies. I sent a huge box of tea to my mum’s as my “coming back” present at the end of this trip.

By the time I parachuted into Beijing, Joel had been there for over 4 years. As a result, he has cobbled together a great group of friends from a myriad of places: Brian, a bright, well-read American from Chicago who came to China to sell custom made latex inflation suits and bondage gear, Hubert, Karim and Jerome, wind engineers from France who each maintain a frightening level of enthusiasm for all things food and adventure (and were the ones to lead the way during our Great Wall camping adventure), Fulvio, a hilarious, vivacious Italian working with the wind engineers, Simon, a new transplant from Switzerland, Haike, a blond haired, blue eyed carbon trader from the Netherlands (and soon to be Joel’s 4th roommate) and Camilla (from Hong Kong) and Kamela (from Canada), two lively, interesting and entertaining women. Of course, these are not my friends, but Joel’s – however, staying on his futon meant that I was adopted by them for the duration of my stay and they made my time in Beijing the most easygoing, entertaining part of my trip thus far.

In all, my 3 weeks were a whirlwind of laughter and relaxation. I didn’t do much touristy stuff, relying instead on Joel et al. to take me through the minutae of their lives. From staying in a siheyuan with Joel and his incredible roommates, Sharry from Inner Mongolia and Youngcall from Tibet, to following them through the tangled maze of hutongs to hole-in-the-wall restaurants and markets, it was a nice change from the “see and do” mentality that usually guides me as a traveler. Instead of checking off sights in my guidebook, I biked around aimlessly and got lost often and began to digest the perpetually changing landscapes of Beijing. As a result, I fell in love with the city a little more each day.

Since leaving, most tourists I’ve met have all dismissed Beijing as a noisy, outdated and dirty cousin to China’s other metropoli, preferring instead to spend their time and money in the glitz and glamour of Shanghai or the fast-paced, cosmopolitan Hong Kong. But for what little of the ‘real’ (read: non-guidebook) Beijing I got to know in my brief time there, I wanted to know more.

How can a city in constant flux be boring? Trying to understand that type of city as it is ‘on a certain day’ is much like trying to nail Jell-O to a wall: almost impossible. It is best to seek satisfaction from the infinity of contrasts instead. From the dichotomy of the tiny, winding alleyways against the concrete mega-plexes to the bustle and smog of the millions of cars against the verdant splendour of the Hou Hai and Bei Hai lake and park areas, Beijing appeared to me a patchwork of opposites, all cradled together in a semblance of organized chaos.

So much of the city is changing, yet so much of the governing mentality isn’t – from a 4-year old unable to digest that I wasn’t wearing socks with my shoes* to a party being broken up because “foreigners eat late and make too much noise”, it will be interesting to see how the constant movement and growth of Beijing leaves its footprint on those who have been there for generations. Hearing Joel and his friends talk about the city’s infrastructure pre- and post- Olympics is a perfect example: many of the buses, metros and roads just didn’t exist until the 2008 games helped ‘will’ them into existence.

* No really: she spent 20 minutes asking me (in Mandarin, with Camilla translating) why I wasn’t wearing socks, where my socks were and whether my mother had told me socks were supposed to be worn, you know, on my feet. Camilla said that even in Beijing’s summer months, people wore socks with their sandals or shoes. Clearly I had really confused this poor child.

It merits saying that it would have been impossible to have seen Beijing the way I did without a network of people who spoke Mandarin. Without the benefit of the language, China is a very foreign place. Sure, you can ‘see’ things, but to truly live there and delve into sites where history, culture and food converge necessarily requires conversing with the country’s inhabitants. And the country’s inhabitants? Don’t speak much (if any) English. This was not my first trip to China and after being spoiled by my reliance on those who spoke the language, I don’t want to go back to see the rest of the country until I learn some Mandarin.

In the end, my stories from Beijing are merely a snapshot of other people’s lives, enticing me to want to live part of mine in their city too. While we are all too familiar with the many problems plaguing China – from the milk and egg scandal to the country’s human rights record and conflicts with Tibet to its unwillingness to compromise on some environmental issues – the reality is that China is growing and changing while many other countries aren’t, and its enthusiasm for newness is contagious. I might just skip Oz and find myself back in Beijing in a few months time, trying my hand at the language that 1/5th of the world’s population calls their own.

1) The Hutong, where Joel teaches cooking and tea ceremony classes; view of Joel’s hutong off of Gulou street. 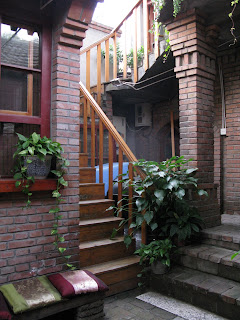 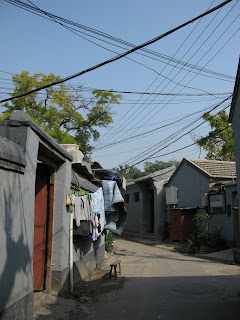 2) Biking through the Forbidden City. 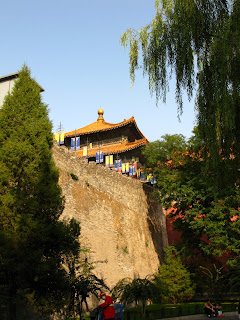 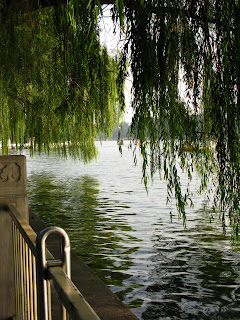 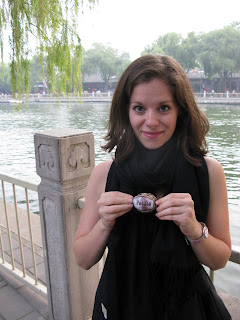 4) Hat Party in the Hutong (all of these hats save for one are Youngcall’s – she seemed to have a hat stash in her room!); me and Joel’s roommate Sharry. 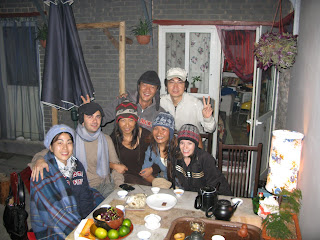 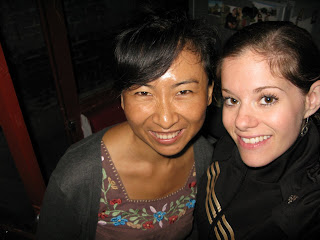 5) Making hotpot at Joel’s place (this was the setup before we dug in); a particularly vocal dog off of Nanluoguxiang hutong: 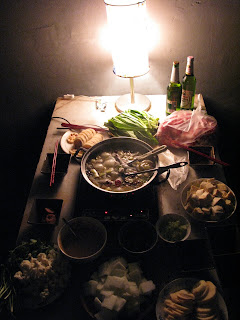 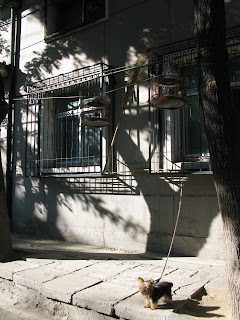 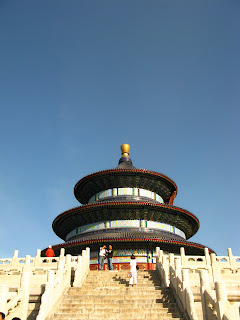 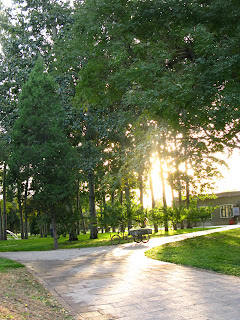 7) The best shwar in Beijing, near Gulou metro station; Me, Youngcall and Joel on my first night in town. 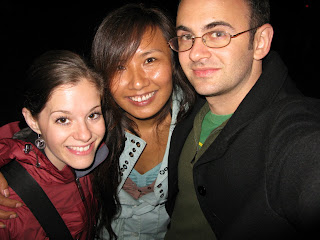