I am writing this from New York City, and it is way colder here than I anticipated. Way colder than, say….Thailand. But, less cold than Montreal, which is where I have spent the last few weeks. Today, Montreal’s high is -19, without windchill. Sometimes I wonder how I grew up there without turning into an icicle.

Canada for Christmas: What was I thinking?! 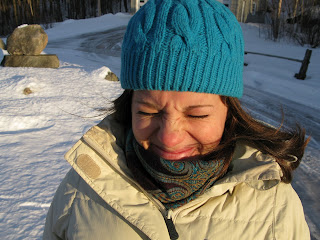 On a whim, I booked a ticket home for the holidays to surprise my family. And by “on a whim”, I mean “four days before I was set to depart.” Unbeknownst to me, Kuwait Airways has incredible online fares, including my ticket from Bangkok – which ran me a little over $800, return. I was set to show up at my dad’s place with a bow on my head until I realized that I needed to find my way from the airport to the house – and that my dad’s place is so isolated that we have no cell phone access there. So, once I landed in New York I called him up and broke the surprise…which went a little something like this:

Me: Hi Dad!
Him: JODI! Why haven’t you written in the last few days? WHERE THE HELL ARE YOU?
Me: Brooklyn.
Him: There’s a Brooklyn in Thailand?
Me: Um, not exactly…..

My dad drove the two hours and back to the airport to collect me, and I was able to surprise the hell out of my baby brother who, being over a foot taller than me, was big enough and surprised enough that he picked me up and ran around the house with me. Canada for Christmas! Cold but cheerful.

I spent a great, jetlagged week relaxing with my brother, his gf, my dad and stepmum and rediscovering what non-asian food tastes like. Definitely a wonderful way to celebrate the holidays.

Next up: surprising my mother and step-dad in Montreal.

This proved difficult because, unbeknownst to me, they were heading to visit my stepsister and her kids in the USA. I only found this out after I had booked my flight home. Cale and I tried our best to dissuade them from going without giving the surprise away, from telling them the weather was going to be bad (“don’t you want to maybe wait to go till later on this week? BAD STORM COMING, Ma…bad storm!”) to vaguely implying that it would be a good idea to stay (“I can’t say why…I just have this feeling that you guys should put off the trip”).

They took off just before Christmas and were scheduled to return just before New Years Eve. Since they were hosting a NYE potluck, I decided to show up at the door then – and hoped they wouldn’t find out about my being in North America beforehand. This was a bit of a tricky situation since my mum and I correspond via email almost daily, but I tried to keep my replies as hazy as possible without lying – i.e. “I’ll be in touch in the next few days. I left Thailand on a whim. My Thai cell phone doesn’t work outside of Thailand”, etc.

In the interim, I had a chance to spend a luxuriously lazy few days with my best friend Nadia, making raclette, eating amazing poutine at La Banquise (for more suggestions see my Montreal Guide) hanging out at the bar with our friends and Nadia’s boyfriend and catching up in person (for once!).

Me and Trishie; Cynthia, Erica me and Nadia all bundled up in Montreal: 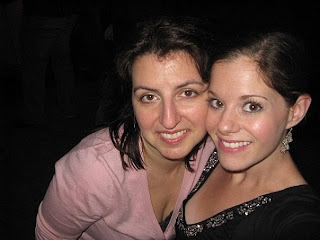 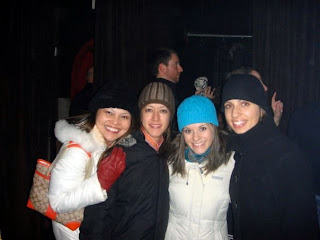 I ended up taking a cab from Nadia’s to my mum’s place, and the cabbie was so excited that I was going to surprise her that he came to the door with me so that he could see her reaction.

Well, she didn’t disappoint: she jumped up and down for over 10 minutes, screamed at the top of her lungs repeatedly (which sent all her friends running to the door too) and then cried off all her makeup. I couldn’t have asked for a better reaction. My NYE was spent in the company of my mum, stepdad and their many friends, a quiet antidote to the month on the Andaman Coast.

And now I’m back in New York, until I fly back to Bangkok on February 1. Tomorrow is Jared from Globestompers‘ 30’s birthday and after traveling through Thailand, Malaysia and Singapore with him, it is karmically appropriate to help him celebrate now that he’s home.

I haven’t forgotten about the postings for Bangkok, Chiang Mai or the incomparable Mae Hong Son loop that I did with Craig – those are forthcoming. And 2009 looks to be an exciting year, with a slew of new countries to visit, languages to try and learn and interesting people to meet. My brother will be joining me for 2 weeks in late February, and I will likely spend a lot more time in Asia where the U.S. dollar goes far and the food is beyond fantastic.

Happy new year to everyone and all the best in 2009!

8 thoughts on “Canada for Christmas”