I have only been in Vietnam for a few days but I am already wondering how it took me so long to get here in the first place. Granted, I’ve just arrived and I am in Saigon**. The country’s geography is so stretched vertically and its history so tangled between north and south that there are little generalisations to be made, especially when I’ve only visited one city. My first impressions of Vietnam lead me to believe that I will enjoy my months here tremendously. The food, the language, the people and the fascinating quirks that separate it from what I am familiar with – i.e., the rest of Southeast Asia – will make for a very interesting winter in Vietnam.

My Introduction to Vietnam

I’m writing this post from my apartment, a $350 a month serviced studio in a tiny building off a quiet alley in District 1. From the window, a nearby choir practices songs, with the nonstop honking from the main road only a distant echo here. Much like my temporary home in Bangkok, the apartment is in the heart of the city but yet strangely buffered from the chaos just at the end of the street. Birds wake me up at dawn – thankfully no myna birds within earshot – and it’s a leafy, quick walk to the main road. I came here in part to be productive with all the work I have to do; being able to get writing done in a quiet home space is a wonderful thing and I’m thankful to have it available.

** Note: people have asked why Saigon and not HCMC. I’ve used both, but asking around to Vietnamese friends, they too use Saigon. I’ve heard both in my short time here. 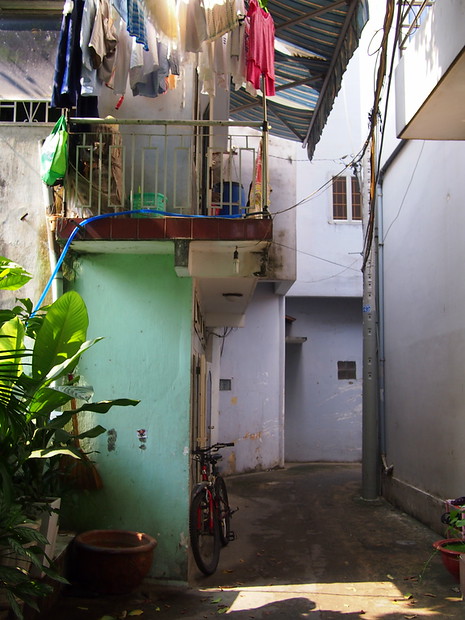 My alleyway in Saigon

For first impressions, let’s start with the food. I’ve long loved Vietnamese eats, pouring over the Wikipedia entry for the country’s cuisine well before I set foot in the country. It’s one thing to long for food from afar, but another to eat it in-country. What we call “Chinese food” in North America is rarely like food in China and besides the regional differences in food preparation and ingredients are so disparate in the country that there really isn’t such a thing as “Chinese food” at all. Like China, the food in North, Central and South Vietnam is different one from the other, though each region does have restaurants from elsewhere in the country. I started off my culinary adventures with a bowl of Saigon style pho (phở Sài Gòn) and have been trying to eat at least one new dish a day.  As goals go, it’s an easy one to accomplish.

Saigon has packed, narrow restaurants from a variety of regions, some setting up in alleyways (called hem here, instead of sois in Thailand) and others squeezed between shops and schools. The next alley over there is a “snail and beer” joint where you pick out your snails, clams or prawns and they cook them for you. At the end of my alley, a rice place packed to the gills at lunch, serving a plate of white rice with choice of meat and vegetables, from crispy pork to sweet, caramelized cod to braised eggs. Much like Indonesia’s nasi campur,  it’s an “everything and rice” kind of restaurant, $1.10 a plate and the best thing to do is go back and try a new topping for your rice each day.

Everything I have eaten thus far has been fantastic, many of them served with a heaping bowl of green herbs (rice paddy root among them), and no meal has cost me over $3, with most ranging from $1-2.

Pho Saigon, with more herbs and a plum sauce that isn’t found in its northern version. 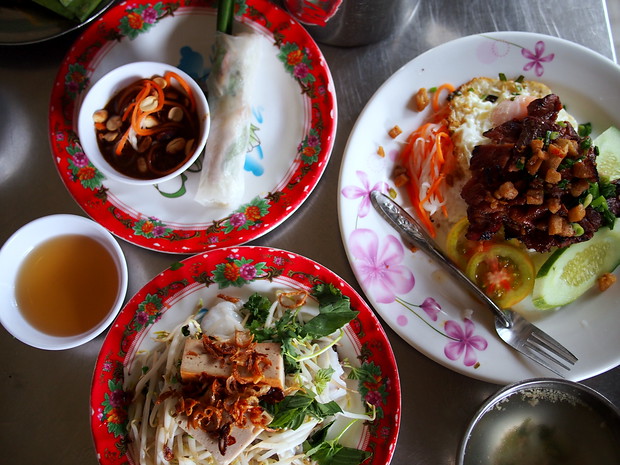 One of my first meals with friends – banh cuon, summer rolls, grilled pork with egg and rice. 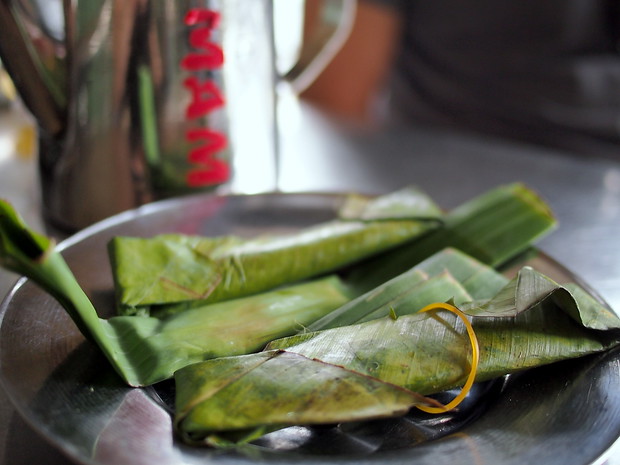 Fermented pork wrapped in banana leaf, not your usual pre-appetizer. 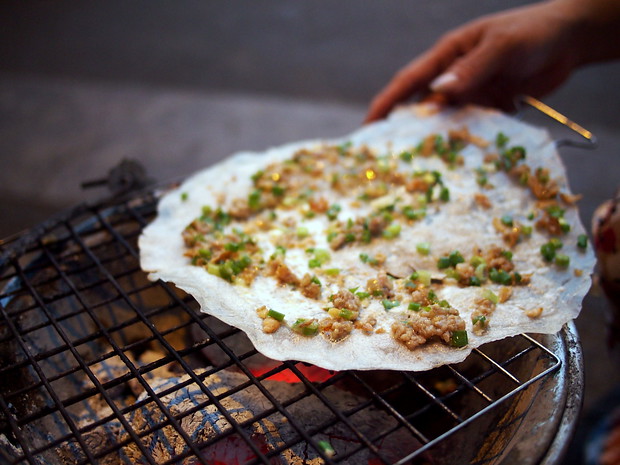 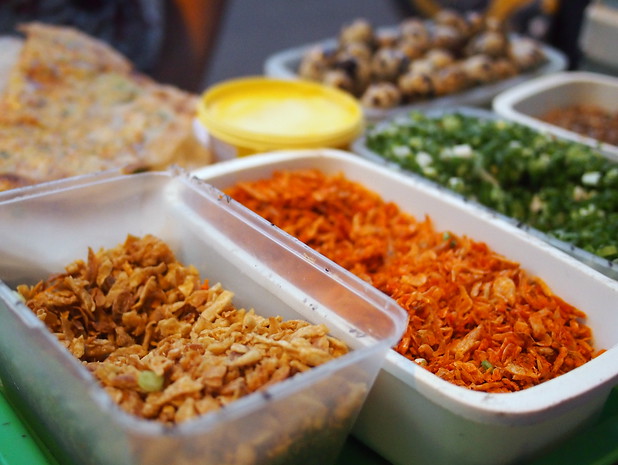 Mien ga, a chicken soup with glass noodles made out of canna flour (a plant), and gluten-free.

Food aside, there are some very familiar sights here in Saigon. After spending close to three years in Southeast Asia, it’s always fun to register what is ‘normal’ and almost feel reassured that things are just as your brain expected them to be. For example:

[Note: this piece was posted on Marginal Revolution and a commenter noted they are telephone and not just electrical wires. They look like a clump of indiscernible wiring to me, but I’ll take his word for it.] 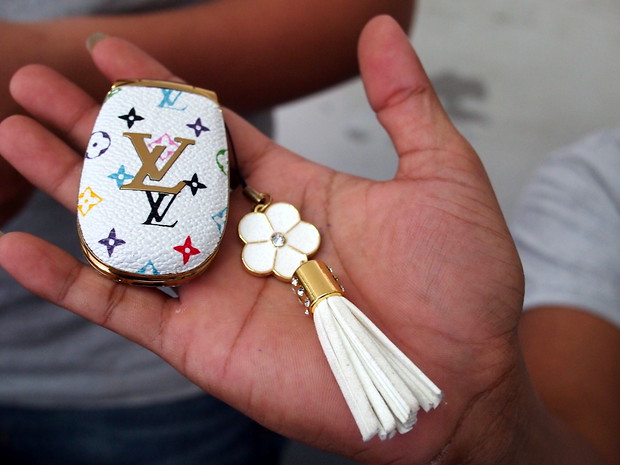 Louis Vuitton phone, as cheesy as it gets.

50 cents for a fresh coconut.

There are, however, some very interesting differences.

These girls asked to take a photo with me when I was wandering in the park – never happened in Thailand! 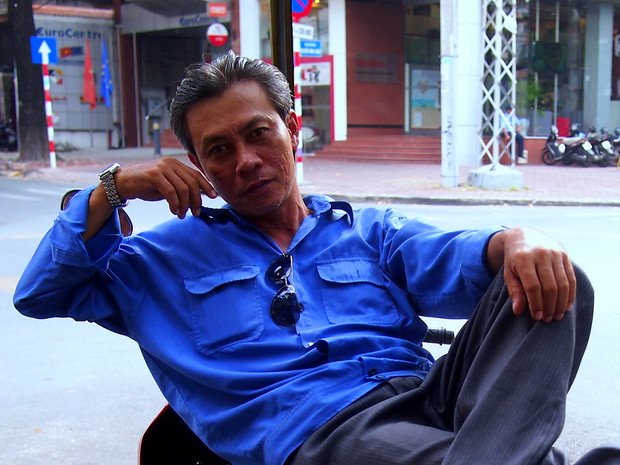 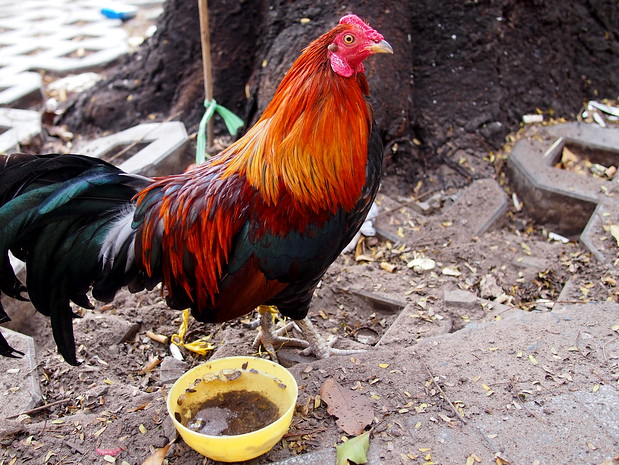 Sunset over one of the many green spaces in the city. 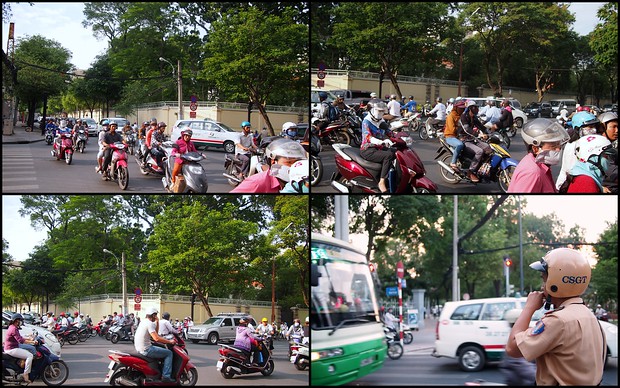 Differences aside – and I’m sure there will be many, many more since I did just arrive here and am still shaking off jetlag – I’m also lucky to have friends in town. James and Will, who I last saw in Chiang Mai and Girona respectively, are both here for a while, and it seems that in the coming weeks and months many others will be passing through the city. I’ve met other writers and expats in my short time here and look forward to learning more about the country through them.

I’m happy. It’s a gift to be able to choose where you want to live for the next few months, and I’m thankful to have decided on Vietnam.

Traffic in Frenetic HCMC, Vietnam from Rob Whitworth on Vimeo. 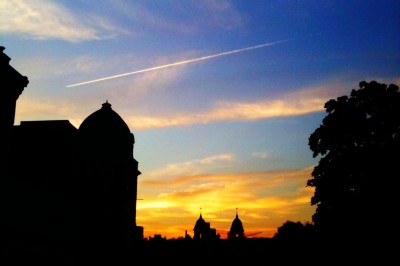 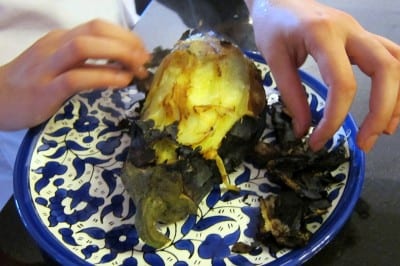 Travel Lesson of the Day:
The Universe is Tiny 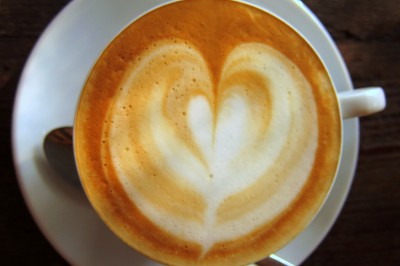