I know I sound like a broken record, but it’s worth noting: my time in Lima was short. Very very short. However, I still managed to eat well. Very, very well. Peru, known for its crumbling ruins perched at the edge of a mountain, its alpaca clothing and its resilient, weather-worn people has had a second coming in the food sector of late. For hundreds of years, Peruvian food has been evolving, braiding in ingredients from far flung places and incorporating them into traditional favourites like ceviche and heavy criollo dishes. Peru is excited about its food, and it shows: Peruvian restaurants are cropping up all over South America, ambassadors of their native country’s enthusiastic devotion to delving deep into a culinary heritage. In my brief time running around Lima, I went to two popular Peruvian restaurants, Gastón Acurio’s Panchita and Las Brujas de Cachiche‘s upstairs bar, Huaringas.

Celebrity Chef Gaston Acurio is one of the driving forces behind the renaissance of Peruvian cuisine. Acurio, who Food & Wine mag describes as “part Jamie Oliver, part Che Guevara […] seen here as a foodie folk hero, seeking not just to raise the status of his native cuisine but to improve the lot of the farmers, fishermen and cooks who create it”, is minor cult figure in Peru. I ended up dining at his new anticuchos restaurant by accident, when one of my meetings ended with a last minute plan for lunch. Anticuchos are marinated, spiced meat skewers that are grilled over an open flame. Popular on the streets of Lima and most other Andean countries, they are taken to a new level at Panchita.

While I ordered the chicken anticuchos, the agent I dined with went for the beef heart and I had some serious food envy. Spicy, tender and perfectly cooked, they were absolutely delicious and marked the first time I had tried beef heart. Each dish was served on a heavy wooden plate, with sides of grilled yellow potatoes and buttered corn, as well as a spicy green salsa to compliment the meat.

It happened that Acurio himself was sitting at the next table, and my friendly waiter (Christian, pictured below) told him that I was interested in writing about the restaurant. Next thing I knew, he was at our table and introducing me to his staff. Throughout the meal, almost every diner in the restaurant came up to take a picture with him or ask for his autograph. I’m not sure what role they will attribute to me (also in their photos) but it made for an interesting (and very fortutious) meal.

Celebrity-spotting aside, his food was undeniably excellent. While more expensive than your customary South American fare (the lunch for 2 ran us close to $30), if you want to treat yourself when in Lima then this is your place. 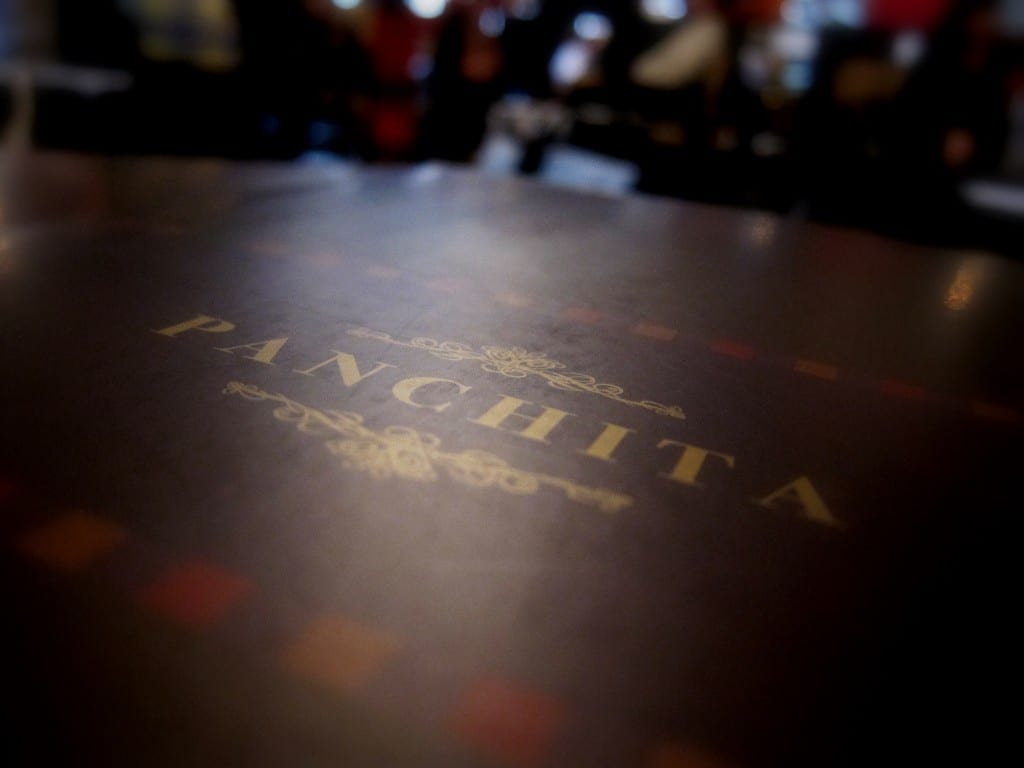 Excellent tamales as a first course, with perfectly steamed corn and tender chicken inside. Served with marinated onions and citrus dressing: 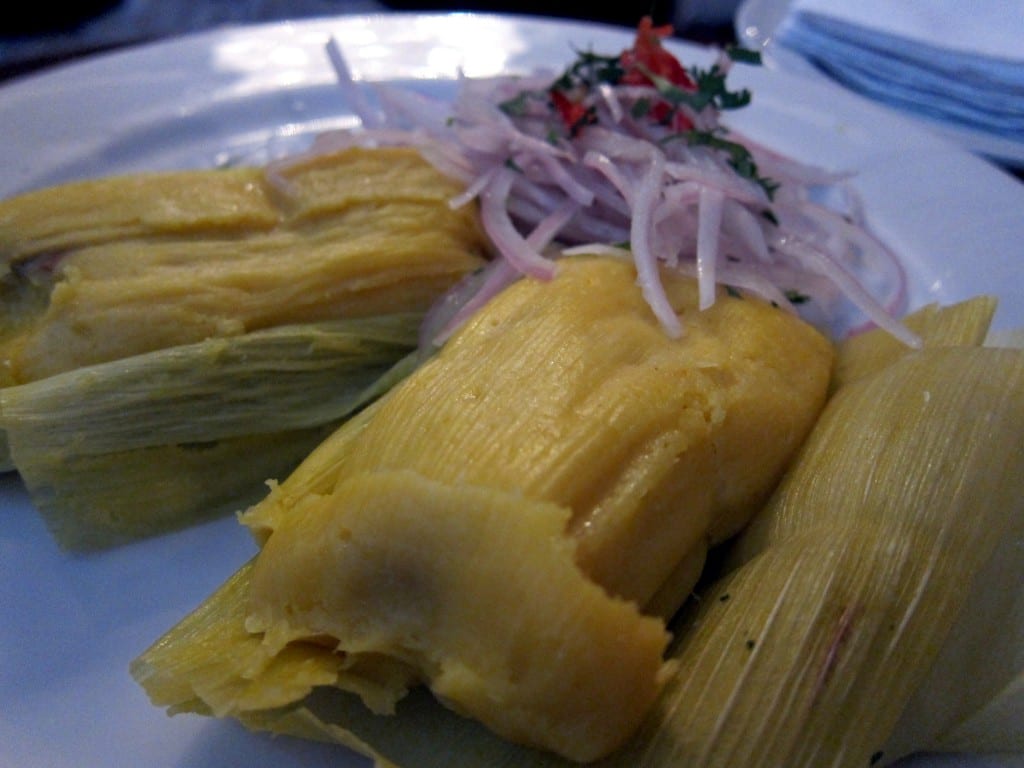 Our waiter, Christian, preparing my chicken dish for consumption: 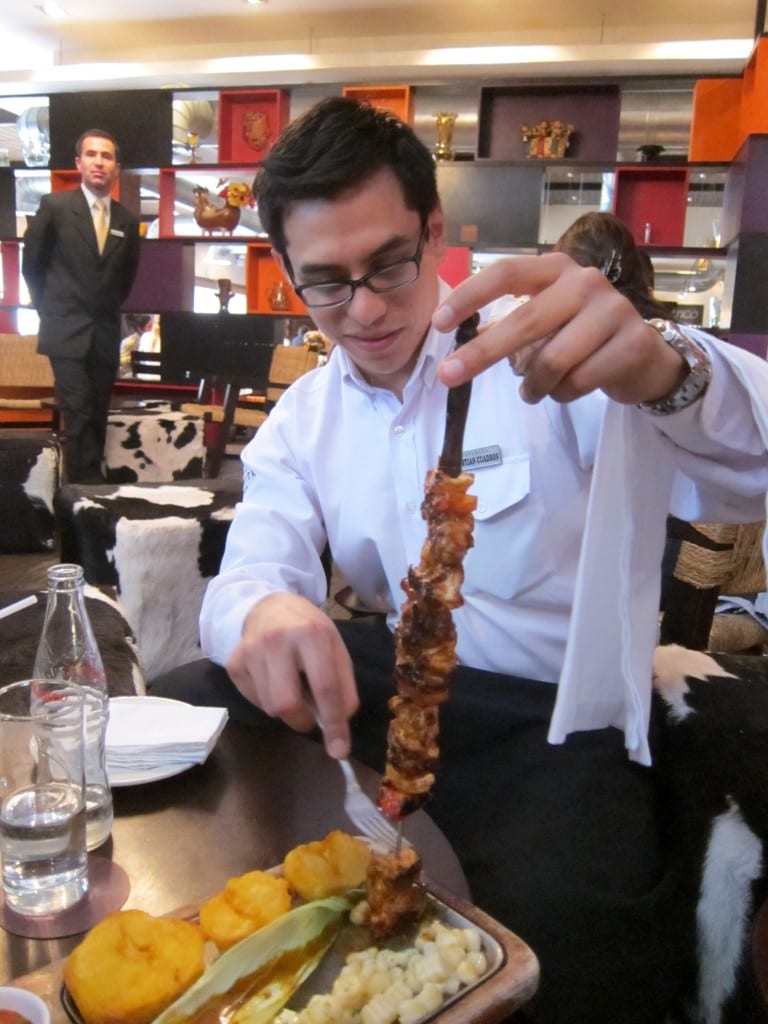 Me and Gaston Acurio in front of his open kitchen at Panchita: 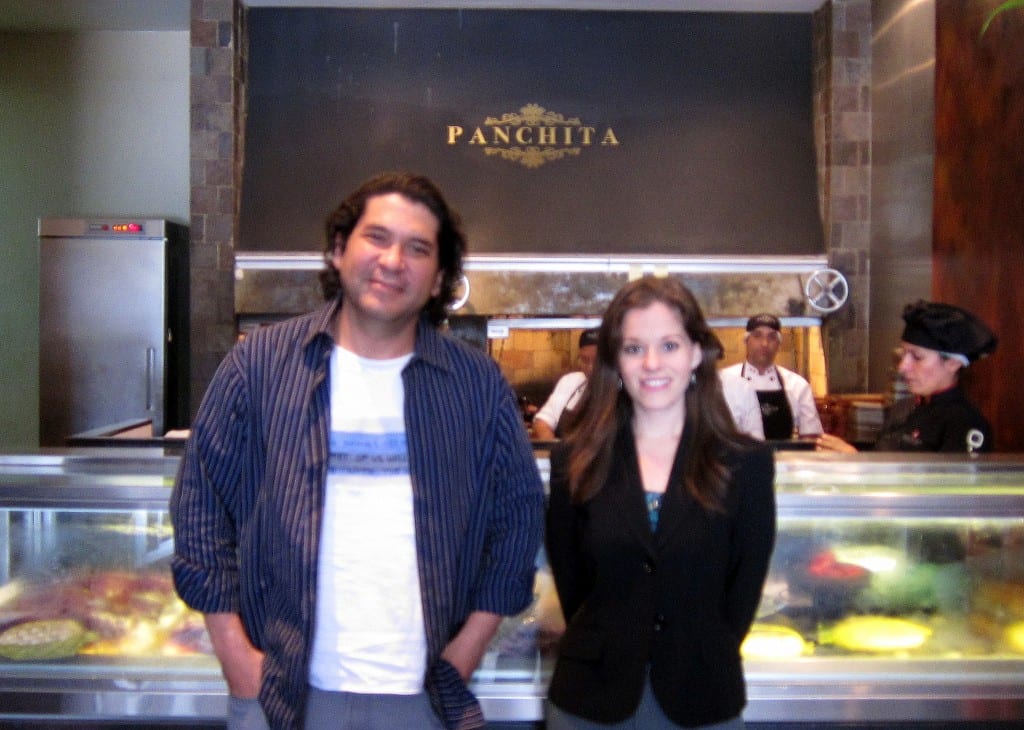 They seemed pretty happy to get their picture taken too: 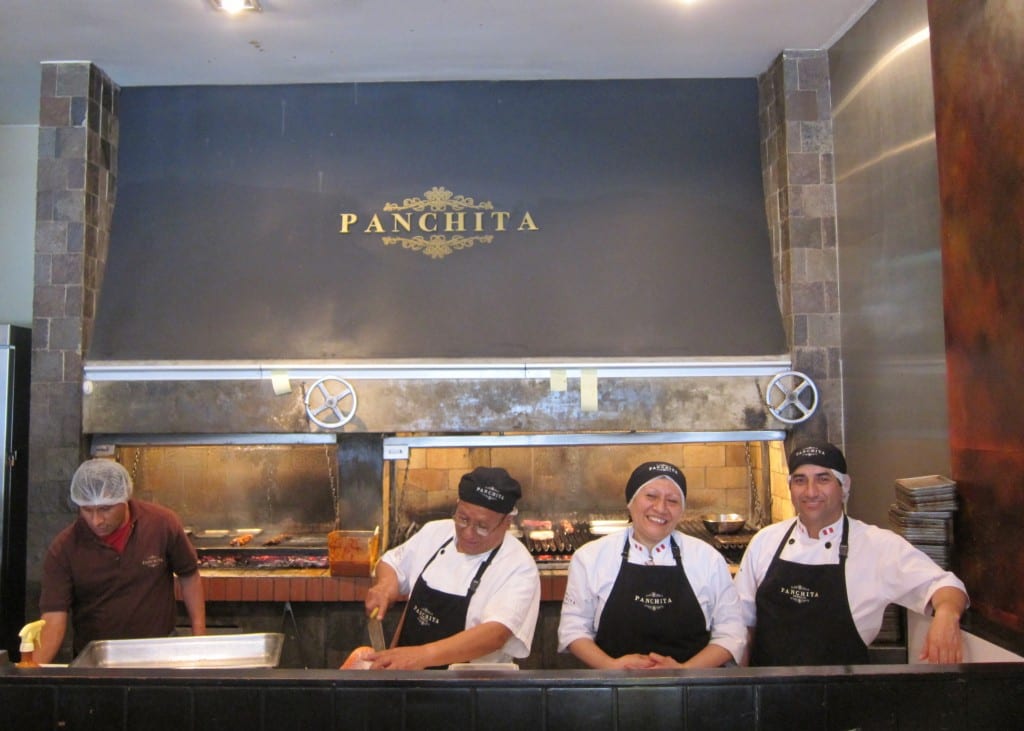 Las Brujes de Cachiche is another restaurant that gets resoundingly positive reviews. Located in Miraflores, the restaurant is inside of a beautiful, old stone building and creeping through its winding hallways and tiny corners added to the culinary experience. Like Panchita, its owner is a well-renowned expert in Peruvian food. Cesar Alcorta Suero’s menu is lovingly dedicated to the histroy and progress of his country’s cuisine and he has presented at food expos in Europe and Asia.

Unfortunately, the food did not match the delicate flavours and lingering tastes at Panchita. I ordered the same dishes, grilled chicken and beef heart anticuchos, but they were a disappointment. The beef heart was tough to cut through and seasoned blandly, with the side dish of corn sitting in a soup of butter and the potatoes limp. The chicken skewers were seasoned and grilled well, but did not match the sting of cayenne and chili in Panchita’s iteration of the same dish. The Brujas chicken dish was served with a pile of buttered snap peas topped with sesame – a strange match for the herbed chicken. Overall, while the decor was lovely, the food was less so.

It’s worth mentioning that Huaringas makes a mean pisco sour. Though both Chile and Peru lay claim to this drink (I’ve tried it in both countries), the version at Huaringas goes a long way to convincing you it belongs in Peru. With frothy egg whites and a kick like none other, it is well worth a trip to the bar to imbibe. So while I’d certainly recommend dining at Panchita, I’d suggest a stop off a Huaringas for a pre-meal drink: the bar was lovely, the drinks stiff and the staff attentive. 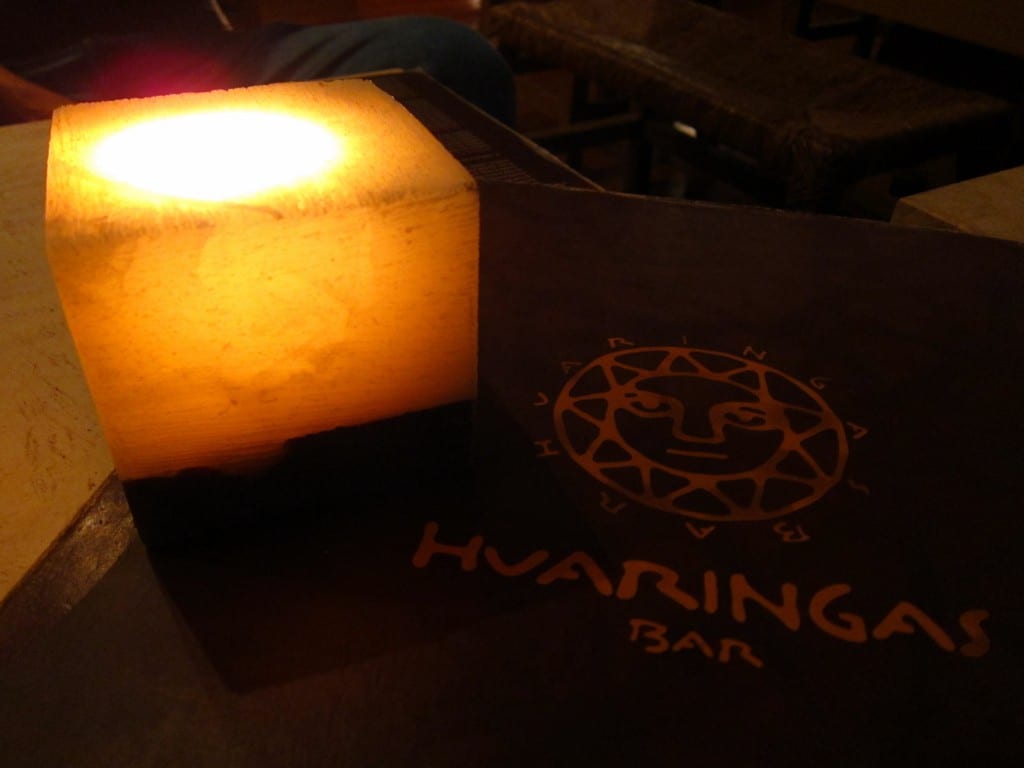 Closeup of the beef skewers: 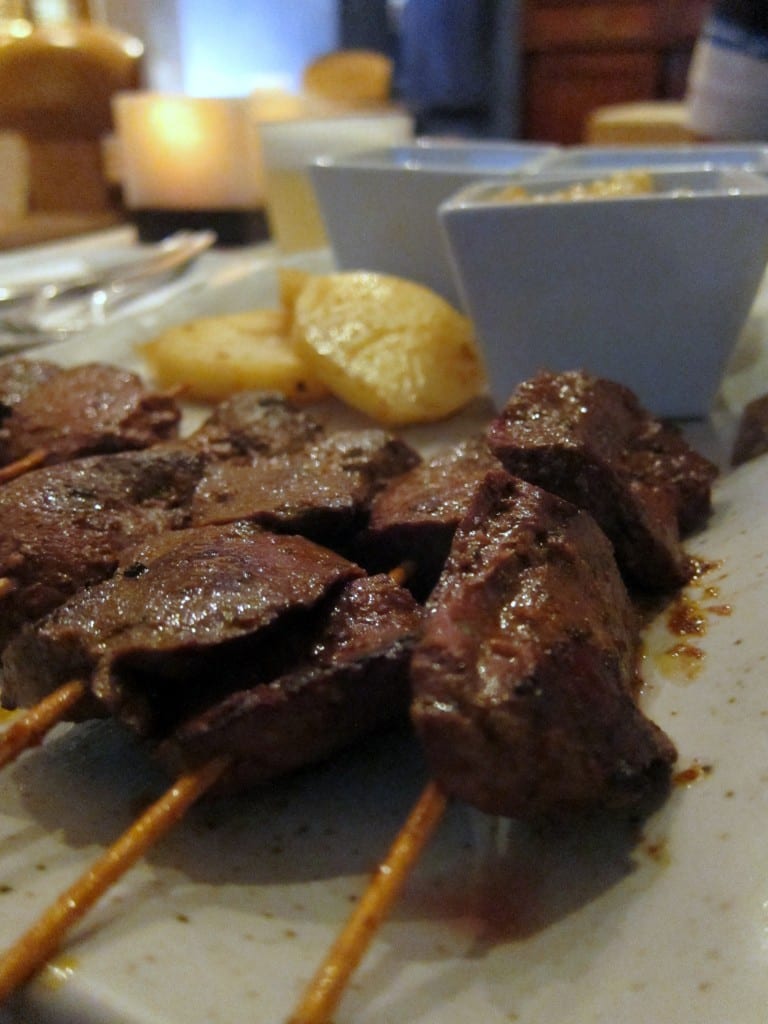 And the good parts: a perfect Pisco Sour 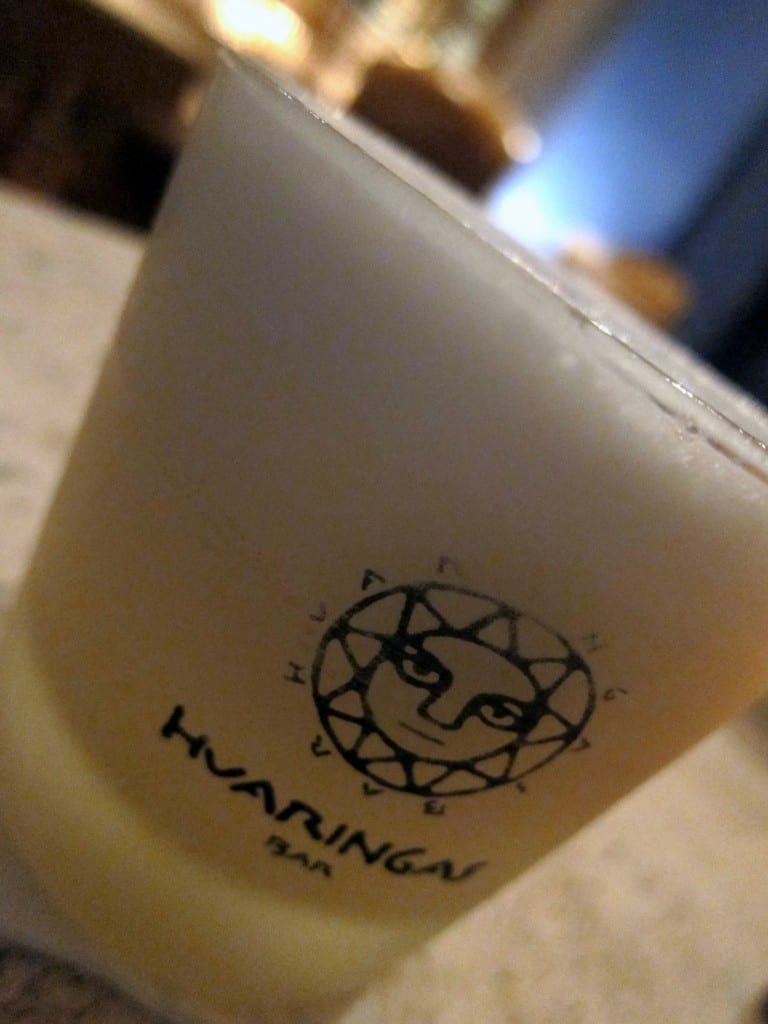 and a lovely bar to lounge in: 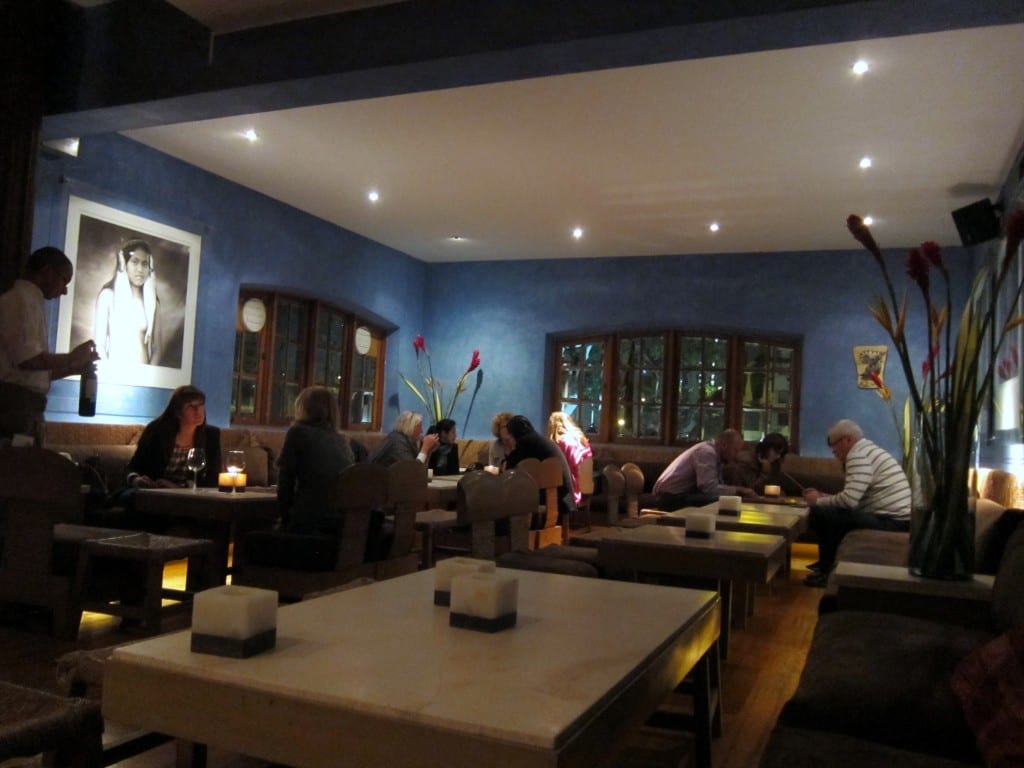 And thus ends my culinary throwdown, with Panchita soundly taking the win.

More from Quito in a few days!
-Jodi