One of the great things about living in El Nido is the abundance of fresh, delicious seafood at a price point that makes most tourists salivate. A whole grilled fish is usually the cheapest thing on the menu here (from 120-260 pesos/$2.50-$3.35), and is usually stuffed with herbs, tomatoes and onions. Every morning, the ladies from the village pass by with a wooden pole slung over their shoulders and dozens of plastic bags filled with fresh fish balanced precariously on each end. What we serve at The Alternative depends on who knocks on our door that morning, a practice I find extremely satisfying. At night, the solitary lights from the squid fishing boats dot the horizon and squid a la plancha – juicy and tender with a squirt of kalamansi and nothing else – remains one of my favorite dishes here. To make matters even better, Philippine lobster (rock lobster or spiny lobster) is both plentiful and out-of-the-sea fresh, if you know where to find it. Lucky for me, I had a friend who did. An El Nido lobster extravaganza followed.

Katrien, a graceful Belgian woman who has lived in El Nido with her boyfriend Javier for the last few months stumbled upon a Lobster Lady who happened to have several kilos of live lobster in her banca boat. Having spent the last ten days with Rob, an environmental scientist from Holland who spent several months living in Palawan to help start a sustainable lobster farm, Katrien and I were dead set on finding him some crustacean deliciousness, stat. Katrien told the Lobster Lady to scour the town for me or a tall Dutchman named Rob and she dutifully did just that, finally running into us at the fruit stand down the street from The Alternative. The Lobster Lady was a sight to behold: she was at least a head shorter than me and likely half my body weight, with shoulder-length gray hair and only 2 teeth. She brought us to her banca boat and we departed with a net full of 8 squirming, angry lobsters.

The lobster came in at just over 2 kilos, and we asked the staff at The Alternative if we could pay them a pseudo “corkage fee” to steam them. We also ordered a platter of garlic fried rice, bought a 1.5L jug of Carlo Rossi red wine and bought some Cloud 9 chocolate bars for dessert.

Me in the kitchen with the chefs, Norms and Inting; steaming our lobsters for dinner: 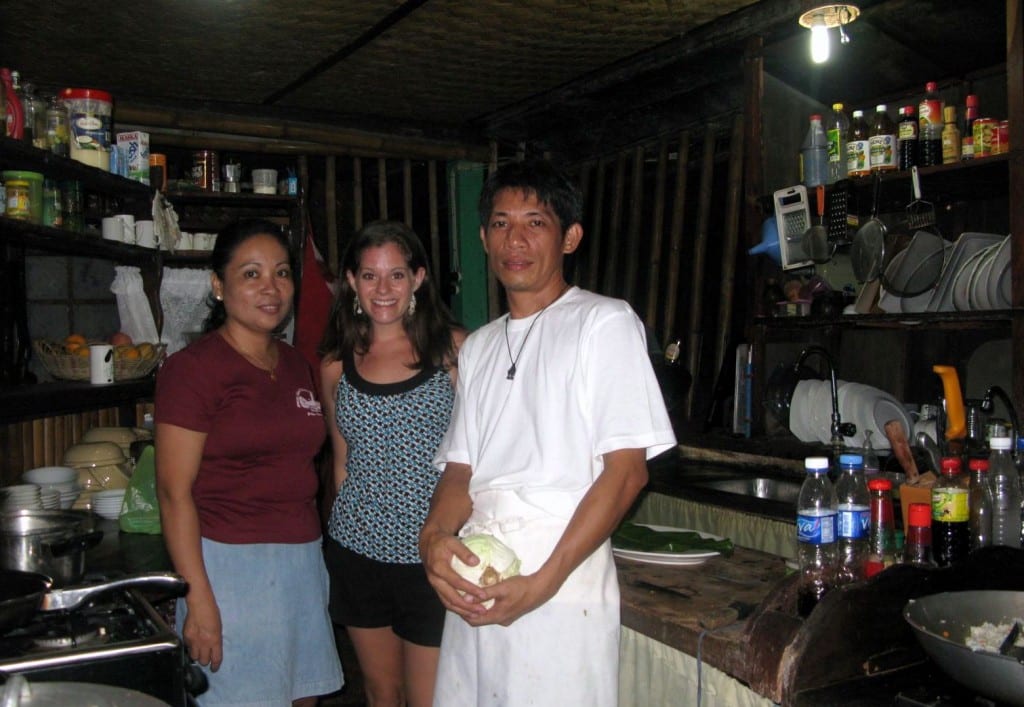 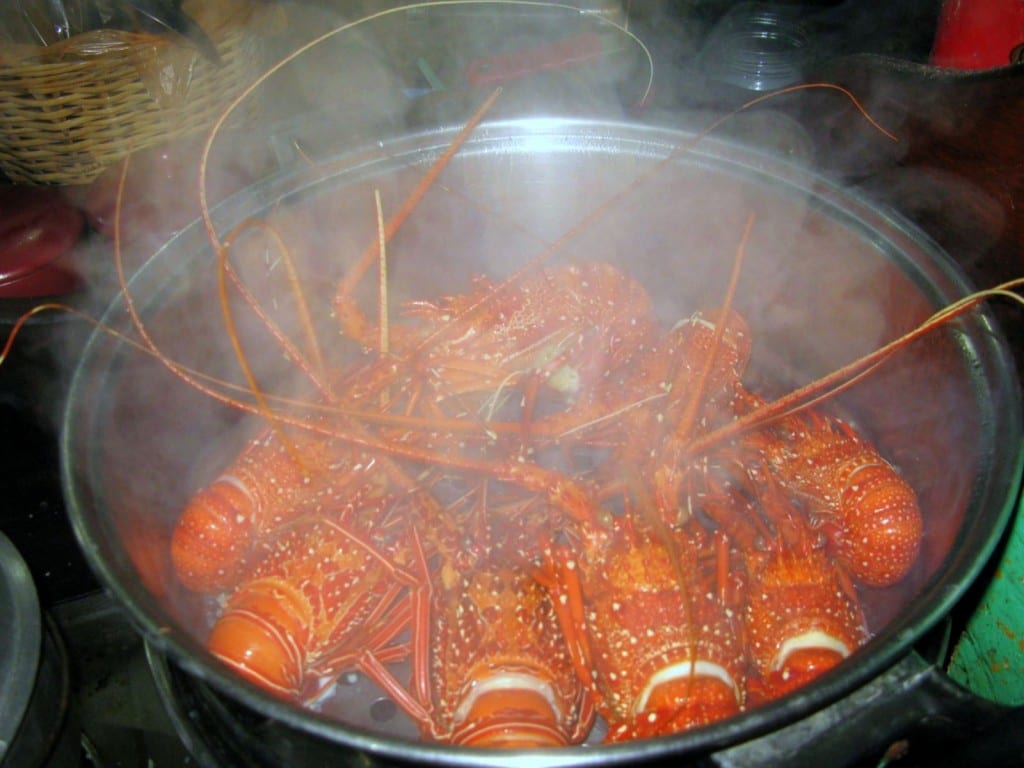 One of the two big plates of lobster; our international group saying ‘cheers’ to the dinner of champions (from the guy in the Orange shirt, going clockwise: Rob (Dutch), David (Swiss), Javier (Argentine), Katrien (Belgian), me (Canadian) and John (Welsh): 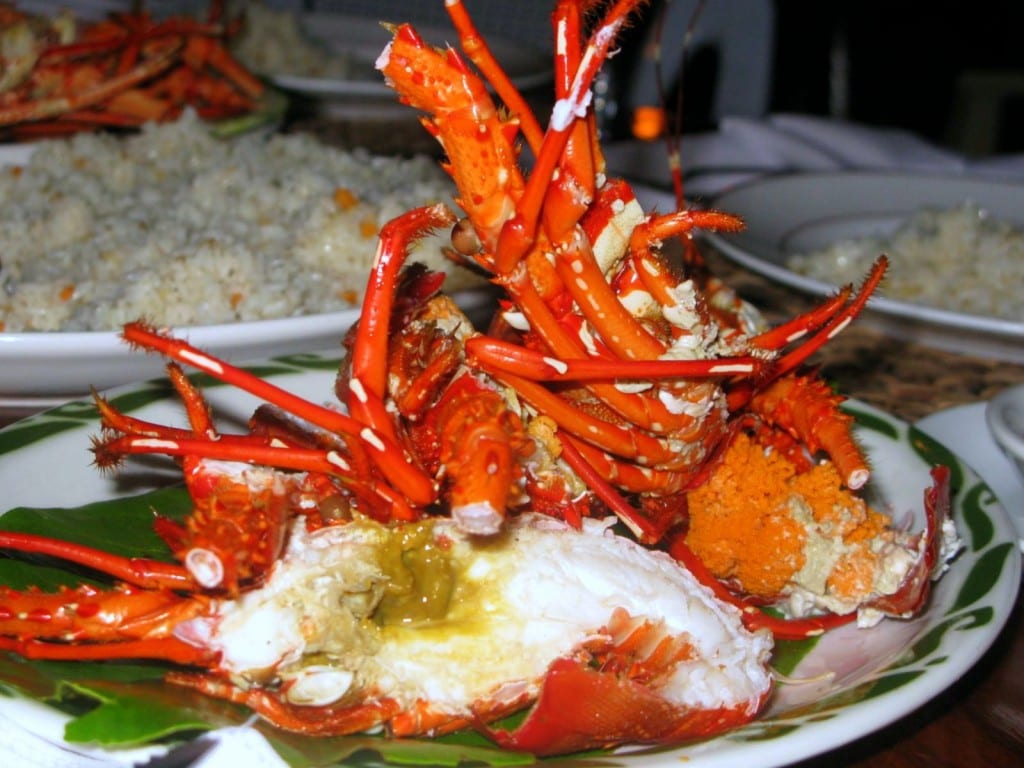 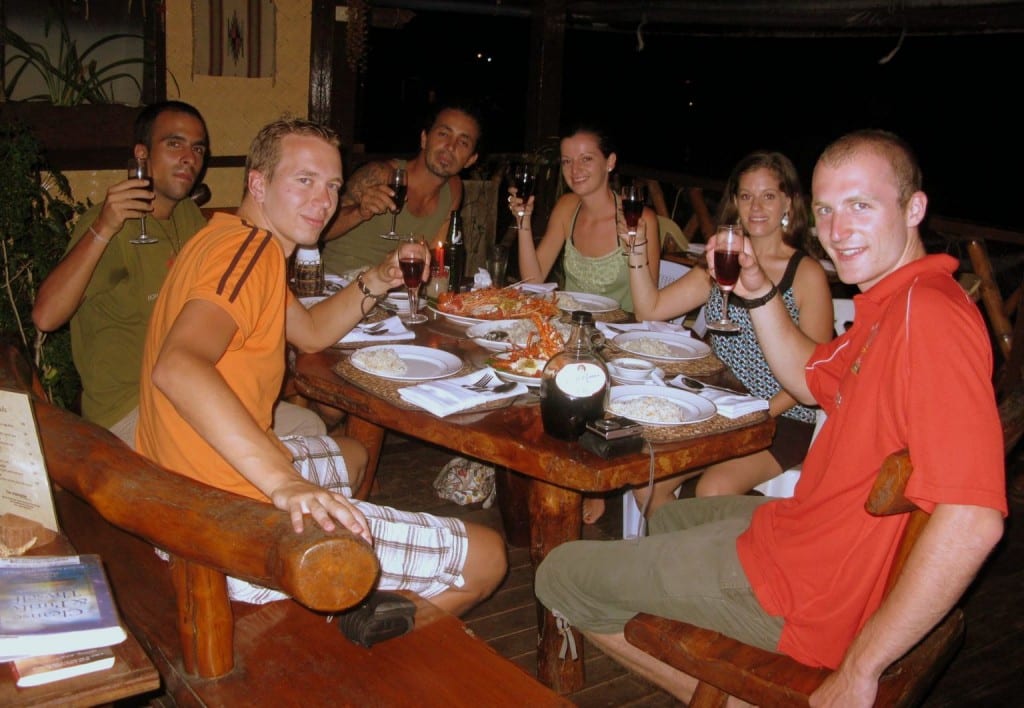 If the pictures are any indication, it was one hell of a meal, and coming in at $7.50 each including wine, dessert and side dishes, it was well worth it. While Rob, John and David have moved on to their next destinations, the remaining 3 of us are looking out for the Lobster Lady around town, excited to repeat our lobster feast.