Myanmar’s former capital of Mandalay has no shortage of things to keep you busy, but one of my favourites was to simply disappear into the bustle of people on the iconic U Bein bridge and watch the sun fade over the water. In my few days exploring Mandalay, I came to the bridge for three sunsets and each was spectacular.

Easily one of Burma’s most photographed sights, U Bein is a teak bridge stretching close to 1200 meters across Taungthaman Lake. While busy throughout the day, it sees the most activity at dusk: fishermen in the still waters, monks streaming crimson from one end to the other, Burmese biking from shore to shore on their way home from work. I loved standing to the side and watching the world go by, a world I’ll never be a part of but one that left me wide-eyed and smiling. 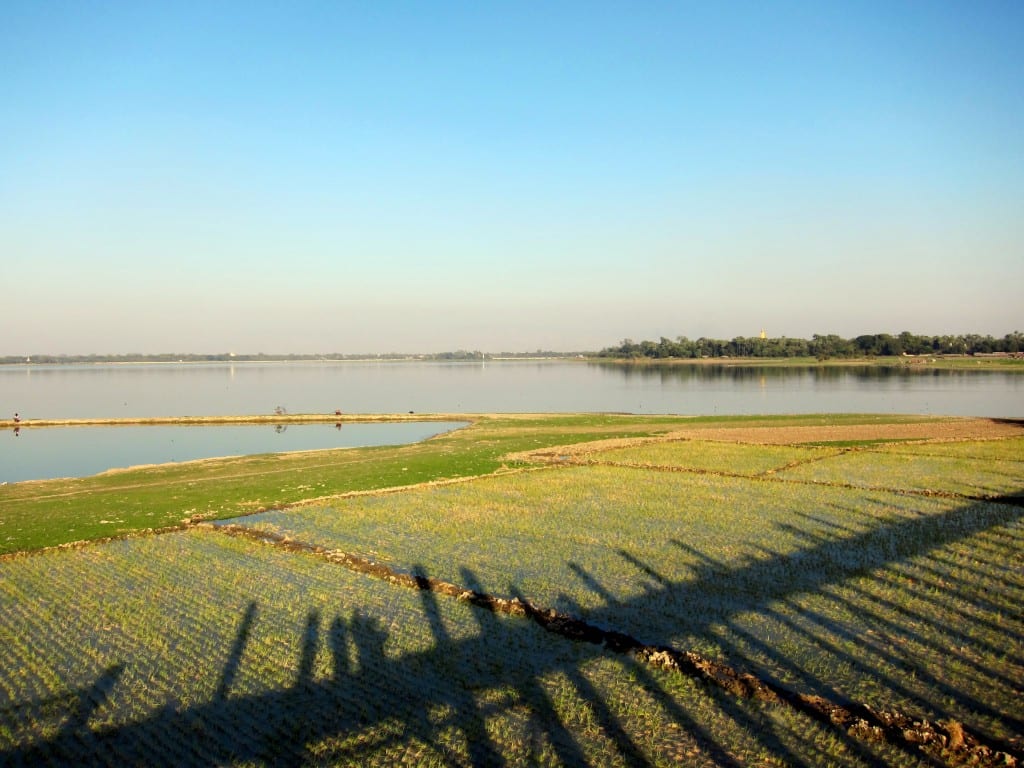 Shadow of U Bein Bridge, midway across. 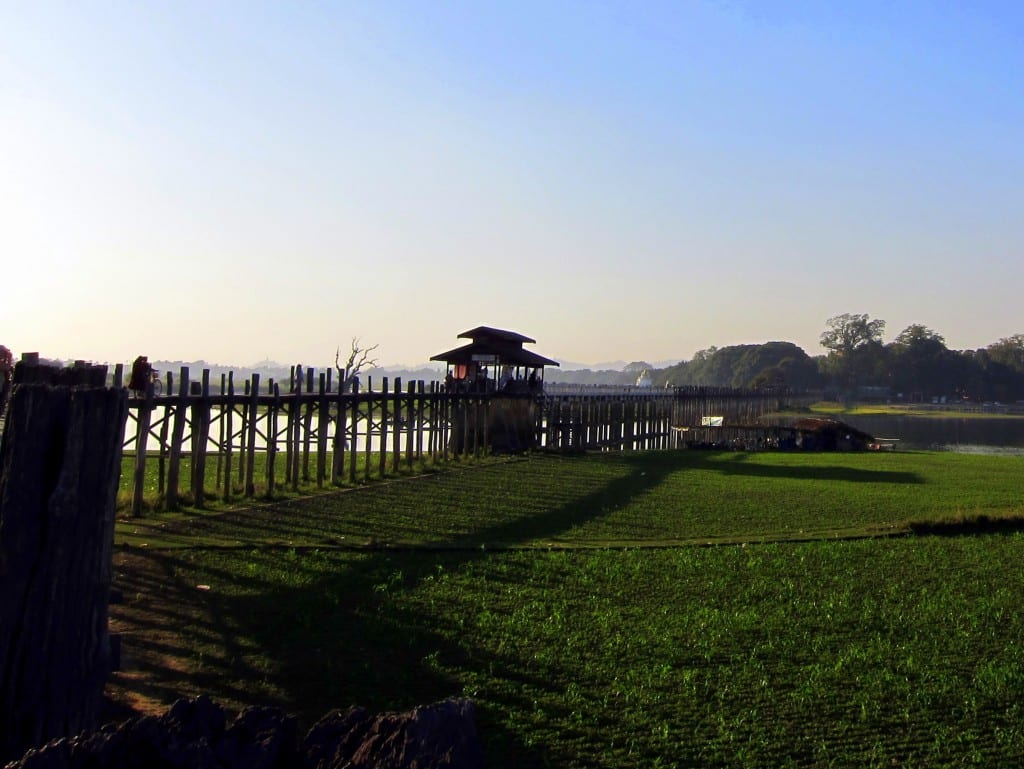 Small resting areas dot the bridge and squeezing to the end of them allow for a different photo vantage point. 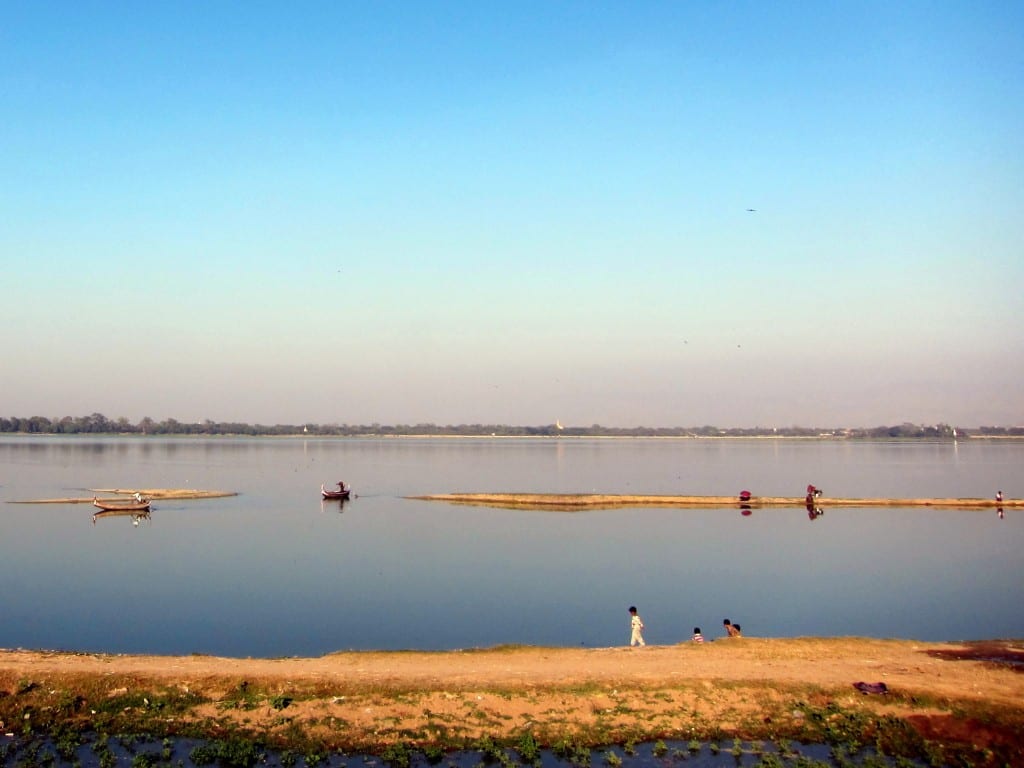 Kids playing on the shores of Taungthaman Lake, with fishermen in the distance. 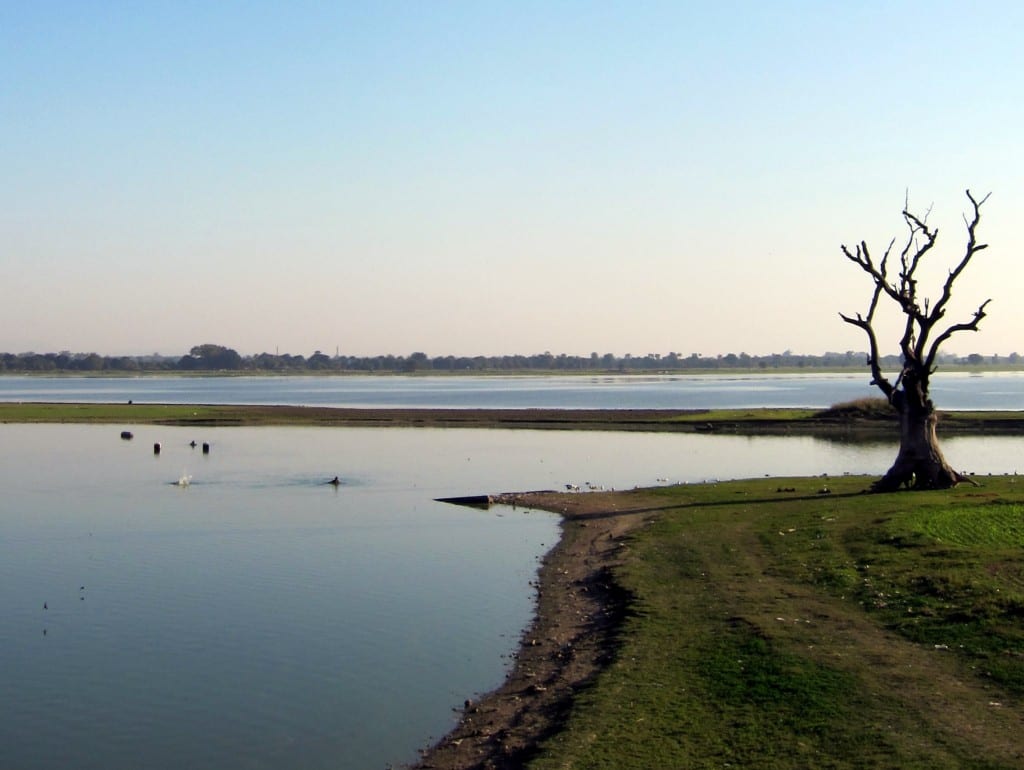 Beautiful gnarled tamarind trees on the shores of the lake.

One of the negatives to visiting U Bein bridge are the many women with tiny wooden cages filled with baby owls. “$1 and I will let it go!” they exclaim, pushing the cage toward you. My guide would shake his head, explaining that the aim was to free something caged and (for Buddhists) thus make merit. As he told it, the owls were trained to come right back into the cage, allowing the next person to pay up for the same release.

As I watched these women shake their owl-laden cages, a lovely girl (Aye, below) came up and shyly introduced herself. She was selling necklaces, she was 13, she was from a village nearby and her English was impeccable. It turned out that her French and Spanish were also fairly perfect and she took my hand and became my de facto guide for the day. Accompanied also by the guide I hired from Mandalay proper, the three of us strolled across the bridge, talking culture and food and religion and stopping to watch the sunset.

At the end of the trip, I bought a necklace from her to give to my guide’s wife. One thing about this lovely girl: she never once pressed me to purchase anything and she never pushed to meet up again. Like many of the Burmese I encountered, she merely wanted temporary companionship, someone to talk to and a picture to remember me by. 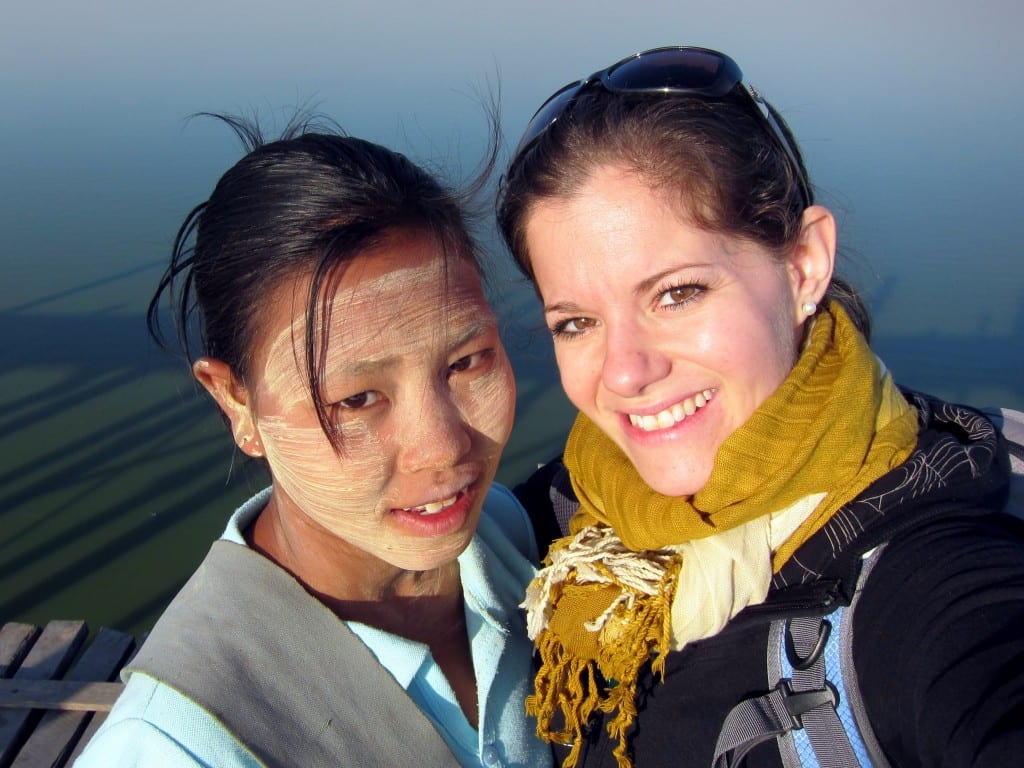 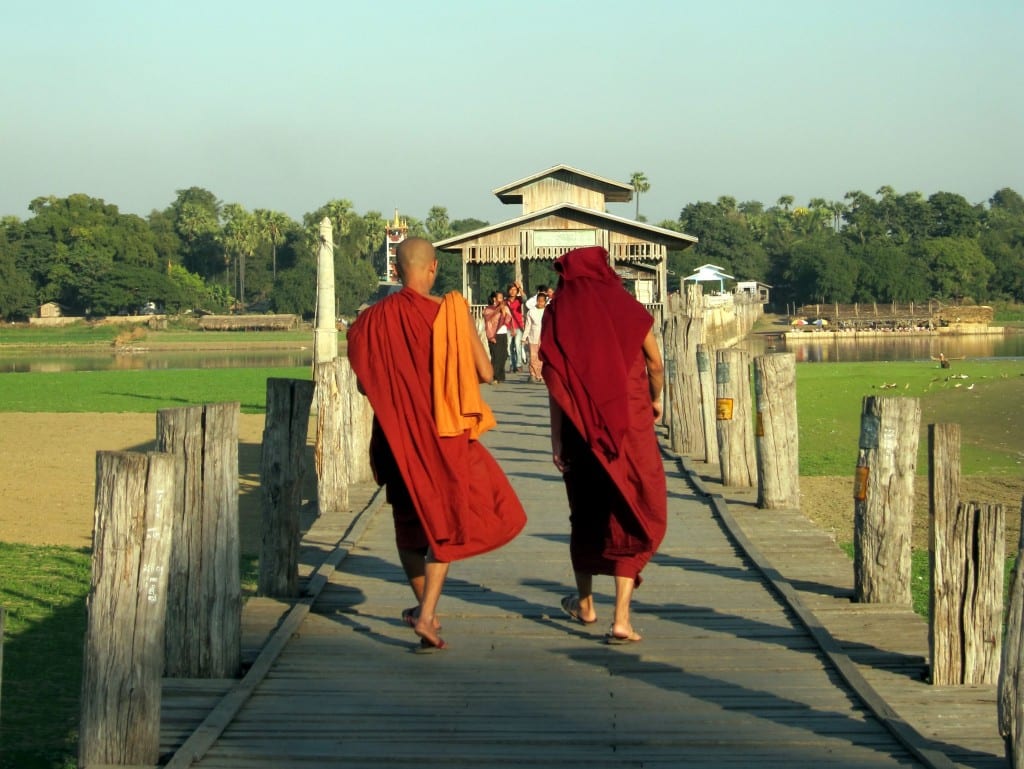 Monks crossing U Bein bridge on the way to Kyauktawgyi Paya on the other side. 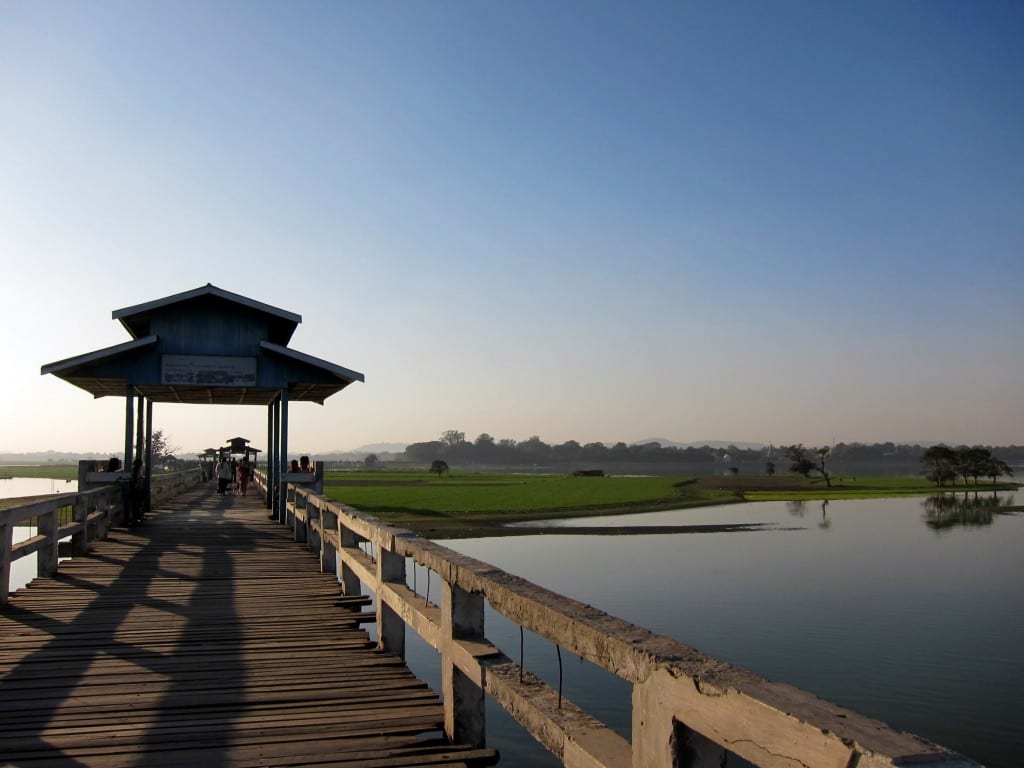 Almost at the end of the bridge. 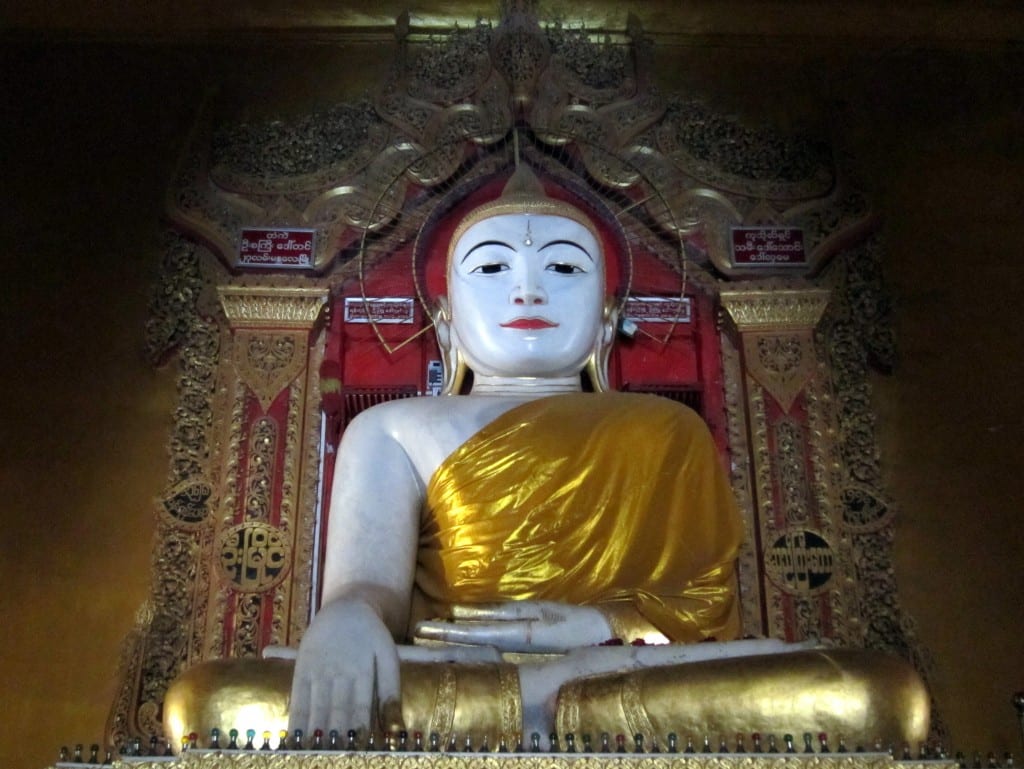 At the far end of the bridge, through Taungthaman village and a cluster of thick trees, is Kyauktawgyi Paya. Built in the mid 1800s, legend has it that the Paya was built in the image of Ananda Pahto in Bagan – and having seen Bagan thereafter, I can certainly see the resemblance. However, atop the traditionally Thereveda Buddhist structure is an out-of-place Tibetan roof, which lends a beautiful, mysterious air to the building as a whole.

Inside the Paya sat several monks, who asked me the customary questions (in the same order as always): (1) where was I from, (2) where was my husband and (3) how old was I. My guide, who at this point knew my actual age and lack of husband status, made the monks guess. They thought I was 16. And then they made me show them my passport in order to prove that I wasn’t. U Bein Bridge: inadvertently good for the ego. 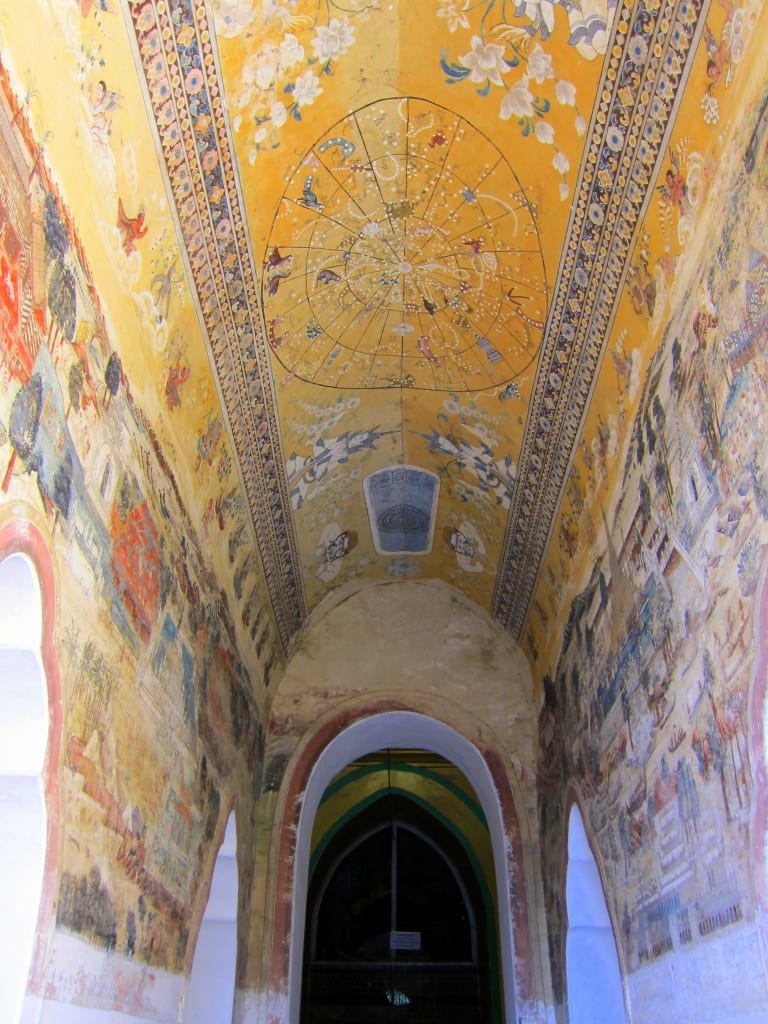 Beautiful frescos inside Kyauktawgyi Paya, at the end of U Bein Bridge.

And some beautiful hallways leading into the main prayer room: 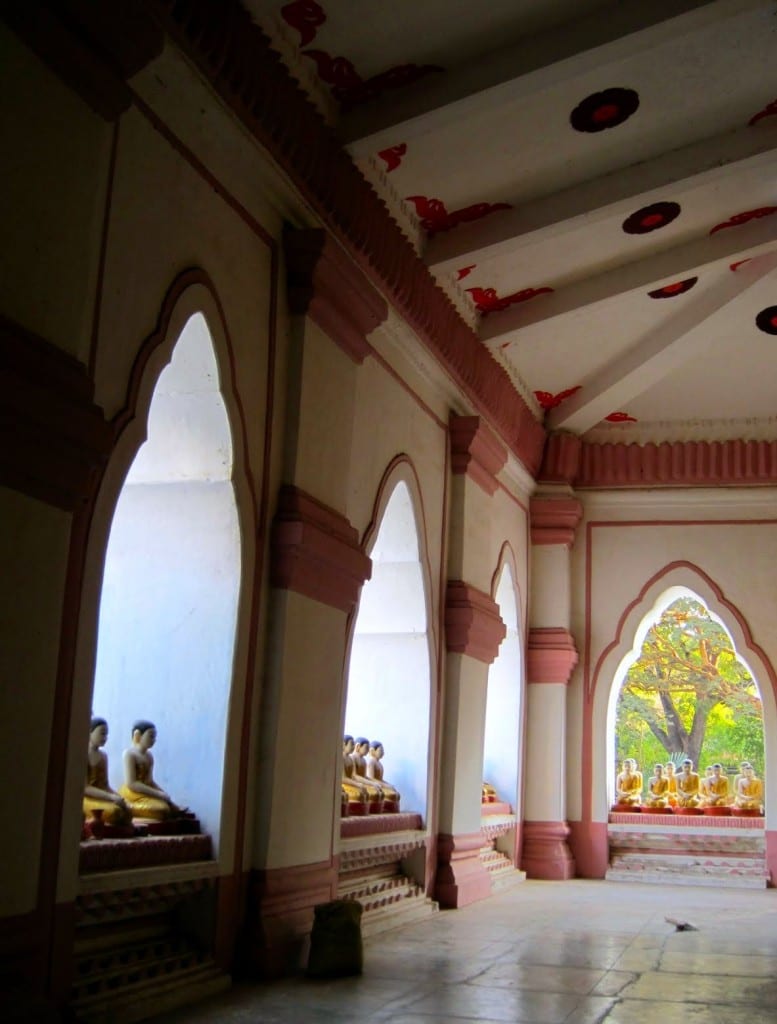 To my delight: outside the Paya was an interspecies friendship I hadn’t seen prior: pigs and dogs playing and eating together. 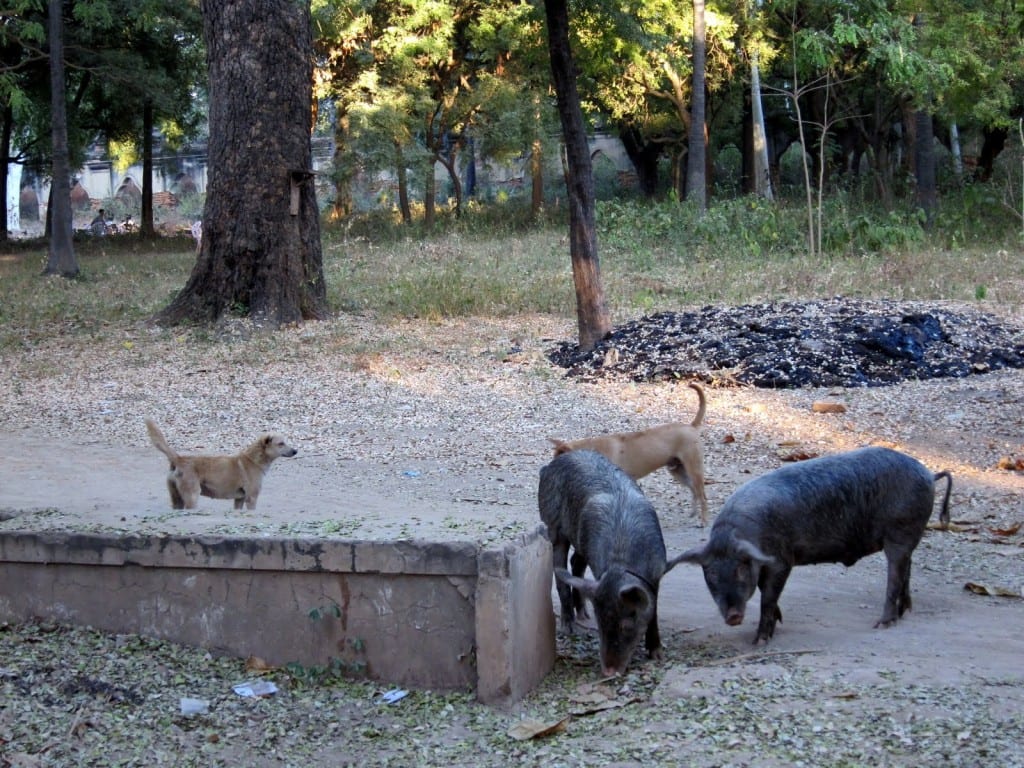 Making my way back onto the bridge (my guide and Aye in tow), the first glimpses of the sunset over Taungthaman Lake appeared: 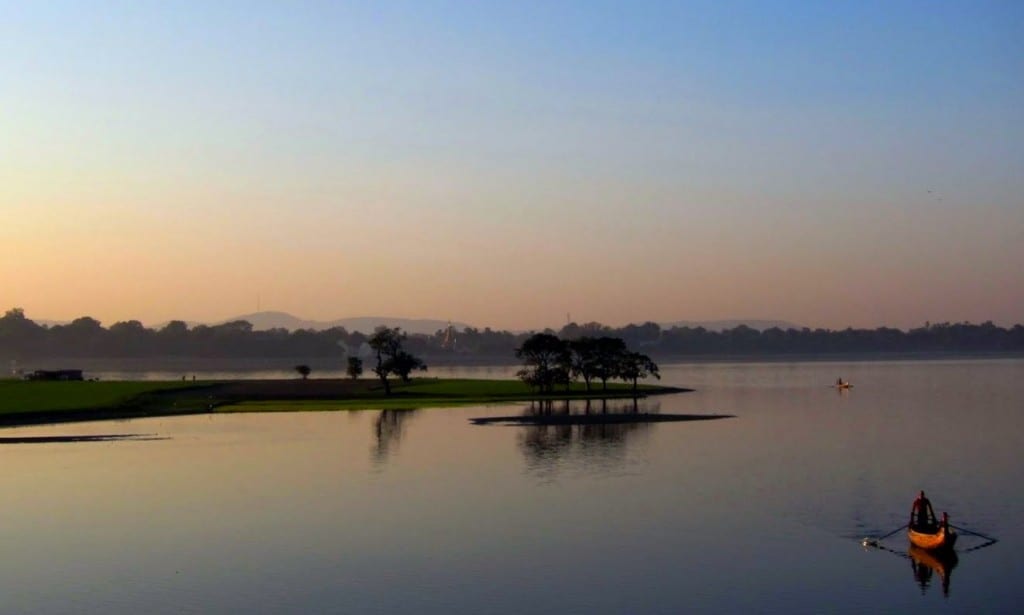 And bled colour across the sky: 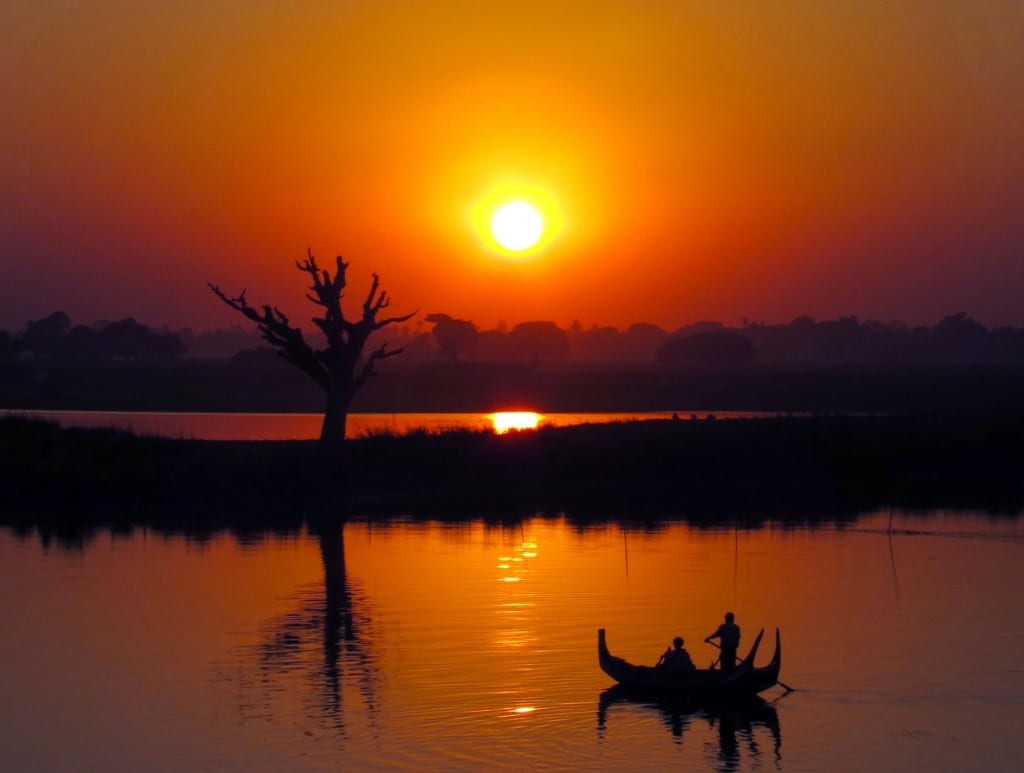 As I went back to my guide’s motorbike (driving without streetlights in the dark outside Mandalay is inadvisible – we left while there was still some light), the last vestiges of the sunset peeked through the trees: 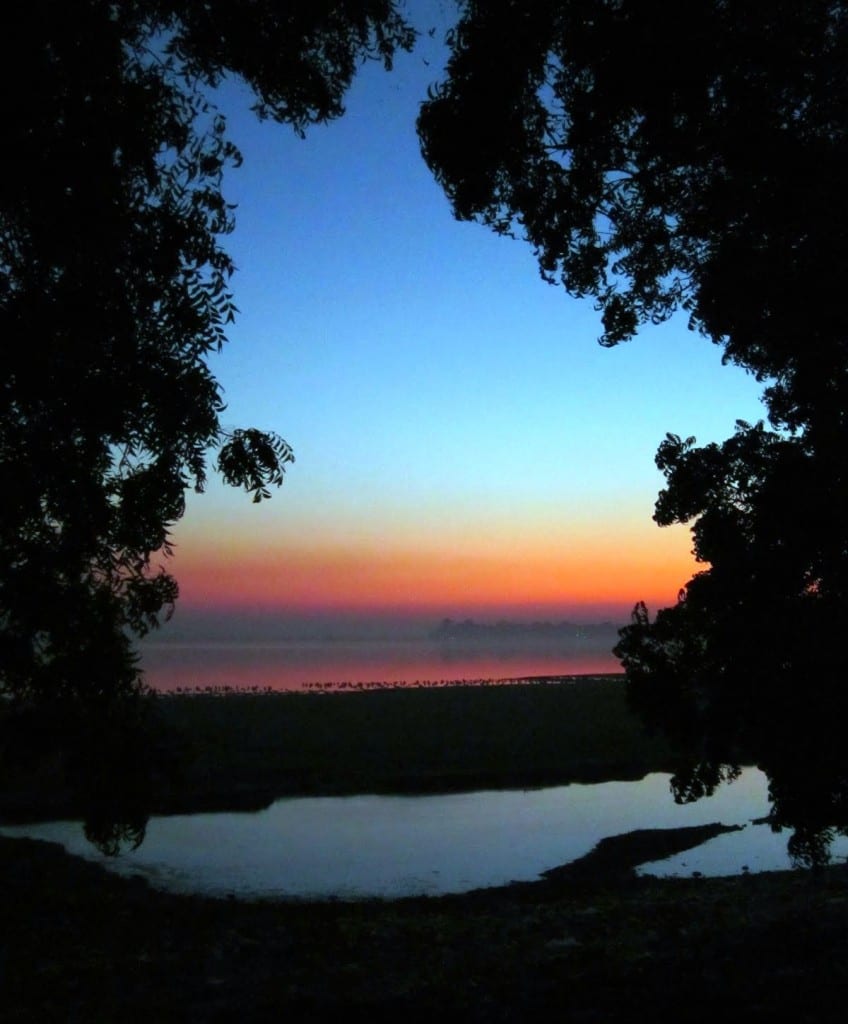 A highly recommended way to spend a late afternoon.
-Jodi