I’ve waxed poetic about the friendliness of the Burmese people, the delicious soups on offer and the sheer vastness of the central plains and their zedi-covered glory. But it is also important to mention a more uncomfortable side to trolling around this complex country: the actual ‘getting around’ part. Bus rides in Myanmar aren’t the easiest.

Before I left for Burma, friends warned me that I needed to build in extra time for transportation. Not for the actual transporting part, but for the recovery required thereafter. And while I did find that listening to The Cat Empire’s full discography made the bus rides I was on less obviously painful, there is no denying the bumpy, freezing, music-drowned nights were a lot less than pleasant than some others in Asia. Of course, adventures in transportation are an integral part of any traveler’s story repertoire, and well more interesting than a posh, seamless ride from A to B. Especially when your usual bus station looks like this: 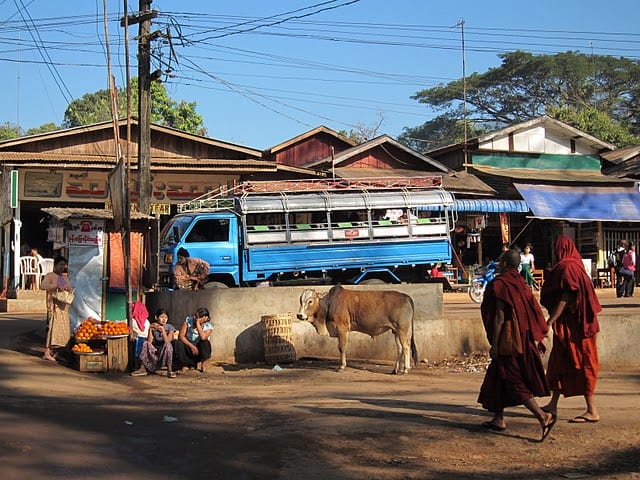 … replete with monks, goats, cows and the requisite ‘lady selling oranges from the basket atop her head.’ The older Burmese women on the bus would buy bags of the oranges and I quickly learned that smelling the peel during the worst of the hairpin curves helped to quell my nausea. An important lesson to learn when taking tiny buses through winding roads in the middle of the Shan foothills.

The 5 Worst Bus Rides in Myanmar

This isn’t meant to be a whine-fest but these rides were truly bad enough to report back on, and worth their own post. The getting around part is what is most interesting and usually a big part of the stories inherent in travel. That we tourist whine about the buses doesn’t really address the locals who take them all of the time, if they have the money to do so. We complain but locals are used to it — which is why it’s important to take public transport as you roam. How else can you explore a place and understand how it all fits together if you don’t travel as the people in the country — some of them, anyhow — have to.

The bus itself was lovely: newly built, with mostly reclining seats and a free bottle of water to boot, and it took the new road from Yangon up to Mandalay. However, the temperature inside the bus hovered around -10C. Despite the fact that everyone on the bus was wrapped in every item of clothing they had, the air-conditioning was not to be touched. “You paid for air-con, you get air-con” said the driver. Lesson learned. Like clockwork, the bus stopped every two hours for food and drink and everyone was forced off the bus each time. When I asked to stay put and sleep, the driver and attendant exchanged a look that clearly said ‘craaaazy white girl!’ and promptly escorted me off the bus. There was one other tourist on the bus, and everyone automatically assumed we were dating because no way would I be alone. So after our 2am food/drink stop, the bus attendant took it upon himself to reunite us by moving the Burmese lady to my left, only to be utterly confused when I stuck out my hand to introduce myself to my new friend.

Though uncomfortable, the ride wasn’t awful and in the end the sunrise as I approached Mandalay made the freezing, sleepless night well worthwhile: 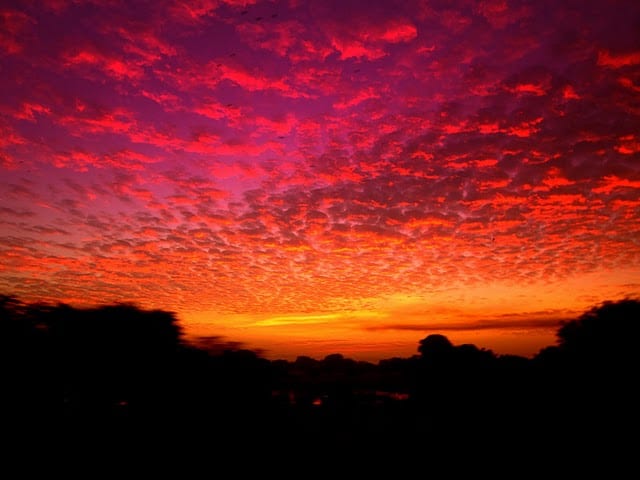 With consecutive hours of high decibel South-Korean rock videos, a family of women who screamed at each other the entire time, and for good measure a small boy who took pleasure in burping at my face every 10 minutes, I did not have a pleasant bus ride. To make matters worse, this was part 2 of my epic journey from Inle Lake to Kinpun (so that I could visit the Golden Rock) and I was already coming off a sleepless night of public transportation and not feeling too patient. I spent most of the ride taking deep breaths and thinking of tarsiers.

This long bus ride was Part 1 of the trip from Inle Lake to Kinpun. As usual, the bus was freezing cold and boasted a calculated set of entertainment options: a continuous loop of loud South Korean rock, interspersed with Bruce Lee movies. At 7pm this was just fine. At 4am I wanted to tear my hair out. Earplugs were just no match for Mr. Lee when he went on a rampage.

Use of the word ‘bus’ is actually pushing it when discussing my transportation from Bagan to Inle Lake. At 3am, what could best be described as a minibus screeched up to my hotel and the driver made everyone climb out so that all the luggage could be piled on the roof and secured with cords.

By 4am we were able to pile back in the minibus, which was so full that mini stools were set up in the aisles. The ride was 12 long hours, the air was choked with dust and almost every Burmese person on the minibus vomited extensively, including the angry older woman sitting about 6 inches from my face, staring at me balefully.

Every minute of the excruciatingly long trip went by slower than the next, and by the time the bus spat me out on the side of the road in Nyaungshwe, I was caked in dust, sweat and the remnants of other people’s vomit. Delish.

5. Kyaitkyo Pickup Truck, from Kinpun to midway up the Golden Rock

This was one of the shorter rides in the country, but what it lacked in distance it made up for in discomfort, fear and sound effects. For 45 long minutes, I was wedged into the back of a bench-lined pickup truck with far too many other people. The rows were so close together that my knee was essentially up the ass of the person in front of me – and I’m only 5ft tall.

In a truck that would normally fit 15, we stuffed 48 people on the way up, and then 50 on the way down, including a gaggle of 30 nuns resplendent in pink and orange robes. I was whipped in the face by the long braid of the woman in front of me (perhaps payback for the knee up her backside?), the nuns were screaming in unison most of the way down the extremely steep slopes and we were thrown to the side of the truck with every turn, despite the fact that logically it should have been too full for us to be thrown anywhere but outside.

For its stomach-lurching, scream-inducing, barrelling-down-a-mountain insanity, this short ride earns my top spot for the worst bus ride in Burma.

Arriving at my destination often eliminates much of the sting (though not stink) from my efforts to get there. Hiking to the top of  the Golden Rock from the upper pickup truck station was no exception: perched on the edge of the mountain, the rock glinted in the sun and the area was brimming with nuns and monks deep in prayer. 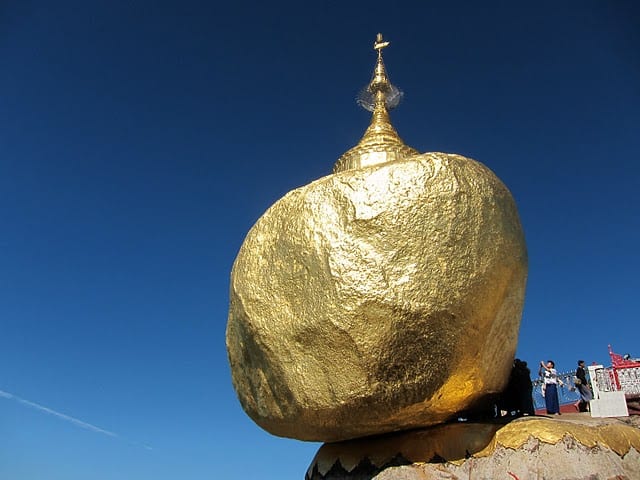 More to come from Burma, including a photoessay on Yangon and the long and karaoke-filled boat ride down the Ayeyarwaddy from Myitkyina to Mandalay.