In the feedback I have received from my initial Crash Course Burma post, people commented or emailed to note that their experiences with Burmese food were not as positive as mine. I hope these delicious soups help sway public opinion toward a more favourable consensus; given the diversity of the minority groups fanning out to the far reaches of Myanmar’s borders, many different dishes exist within the country. I tried my best to eat them all. There are a wide variety of options for vegetarians and non-vegetarians alike, and many many soups.

Soup in Myanmar: Worthy of Exploration!

My first day in the country, I dined on a bowl of mohinga. I’ve never been the same since. 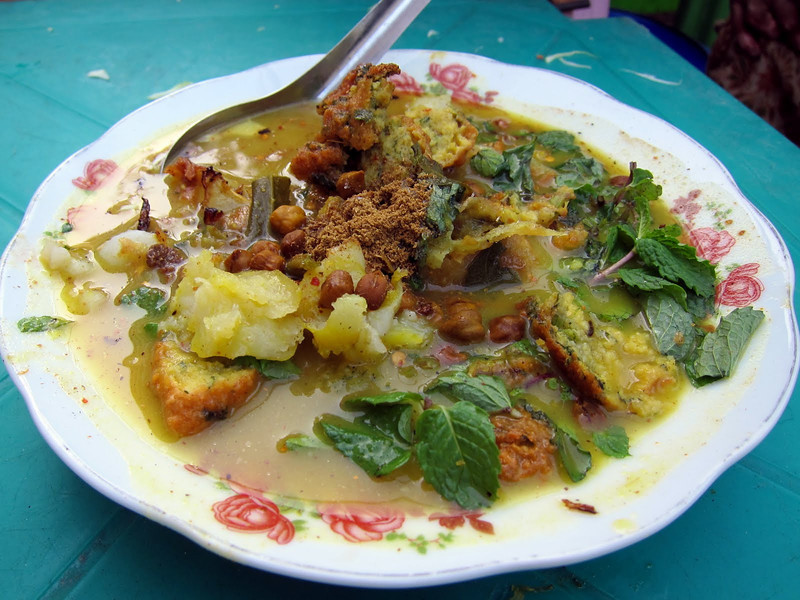 Eaten crammed into a tiny roadside stall’s plastic stools in Yangon, with the two women I met at my hostel watching me with a mixture of horror and fascination.

“But, aren’t you afraid you’re going to get sick?” one of them asked. “Worth it!” I responded. This soup was just that good. (I didn’t get sick)

The mohinga captured above was modified by the lovely, proud Bangladeshi woman who served it: instead of coriander, she used fresh mint leaves and instead of the bean fritter, she cut up a samosa with scissors and dropped it into the soup. Despite my questioning whether this was mohinga – surely such a wondrous adaptation must have its own name? – she insisted that it was. For 300 kyat (30 cents) it was my first foray into Burmese food, and quite a success. I learned quite early on that soup in Myanmar was a national affair and one that I was quite happy to taste test throughout my time in the country.

The second soup I tried in Myanmar was in Mandalay, at the home of one of the more generous people I met there:

Since he is not technically supposed to be taking foreigners into his home, nor talking to them about the political turmoil of his troubled country, I won’t go into any more detail about his life. Suffice it to say that his generosity of spirit and overwhelming devotion to his growing family was wonderful, and when he offered to take me to his apartment block to meet his wife and cousins and parents and children — all of whom live in a tiny one-bedroom box – I could not refuse.

Of course, I reiterated that he ought to avoid taking me there if it would get him in trouble, but he maintained it was important for me to see how poorer Burmese lived within the tangled chaos of Mandalay. The soup was a bare-bones version of Shan khao swey, similar to Thailand’s delicious khao soi soup but without the thick coconut milk. The soup consists of rice noodles with chicken or minced pork that have been stewed in crushed tomatoes, onions, garlic, chili, crushed roasted peanuts, young snowpeas & coriander, and is served with tofu and pickled mustard greens (called monnyinjin). It quickly became a favourite in Myanmar, and this introduction was an auspicious start to my Shan noodle fests that peppered my time in the country.

For a detailed photoset of khao swey, both Burmese and Thai based, check out Eating Asia’s great “Now About Those Noodles” post. For a mohinga recipe see this Guardian piece

From Mandalay, I took a long, adventurous train ride up to Myitkyina for the Kachin State Fair, and quickly discovered a new favourite Souplady at the local market. 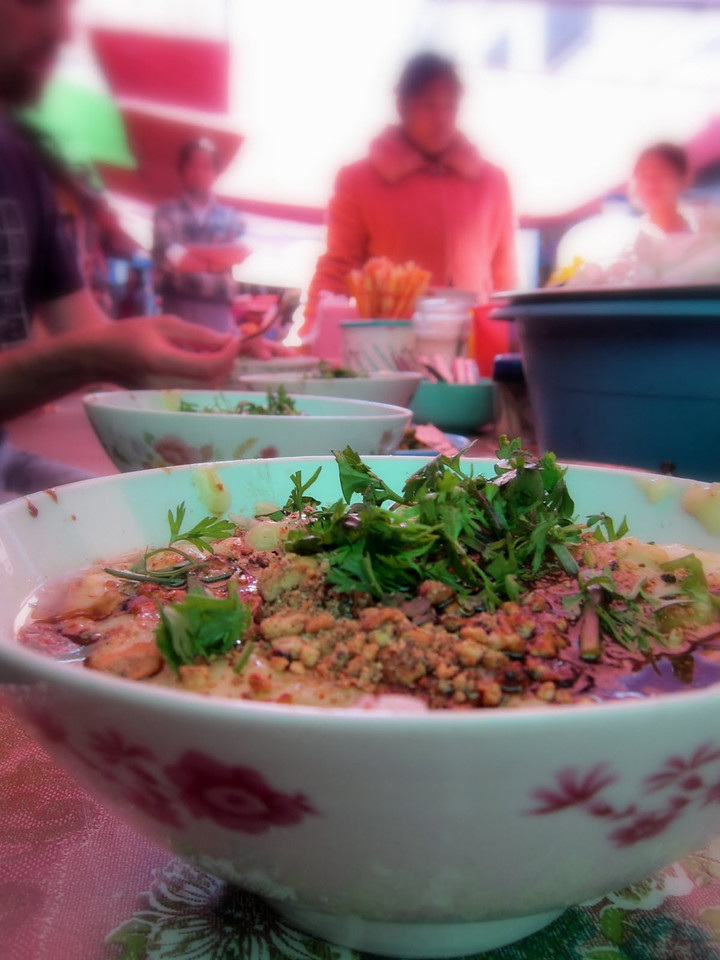 Though it might not look as pretty as some of the other soups here, this rice noodle and tohu byawk soup was terrific. Tohu byawk, or Shan Tofu, consists of tofu made from split peas or chickpeas and served warm in thick, goopy yellow spoonfuls.

Dropped into a bowl of fresh rice noodles and topped with peanuts, a sweet tamarind sauce, marinated chicken and fried garlic, the tohu byawk tasted fantastic. Extra bonus: see how long it takes to mix up the glutinous mass into something more uniform. I was hooked, and soon convinced the other 12 foreigners in town to join me at souplady’s stall in the mornings. By the time I left, the rest of the market would greet us all when we strode in for our morning meal. 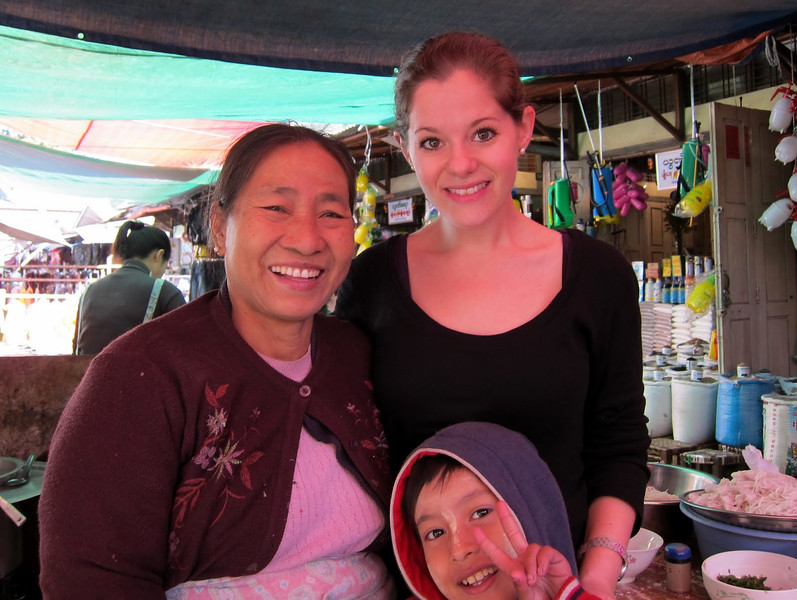 Souplady, me and her grandson at her stall and confused about what this whole “self-portrait” thing was about.

After my foray into goopy, tofu-y deliciousness, I discovered a new type of soup, slow cooked in a tiny clay pot and bursting with flavour:

In an ideal world, everything would be a ‘pick whatever you want and we will put it in your soup’ type of place. This small restaurant on a quiet sidestreet in Mandalay was just that kind of place, with a pile of clay pots and a dozen different meat, vegetables and noodles to choose from.

Back in Mandalay after a slow, hilarious 5-day boat trip from Myitkyina (highlights involved my singing karaoke with the captain, doing Kachin whiskey shots with the crew and being asked by the chef to cook for the boat using a gargantuan iron wok in the middle of the lower deck), I wanted to try something new. I hadn’t seen these soups before, and I giddily pointed to what should be added to the pot and watched as it was cooked over a tiny fire. As the picture shows, it was delicious.

Shan Khao Swey for the Ages

And then, in Inle Lake’s Nyaungshwe, I discovered the mother of all Shan khao swey soups: 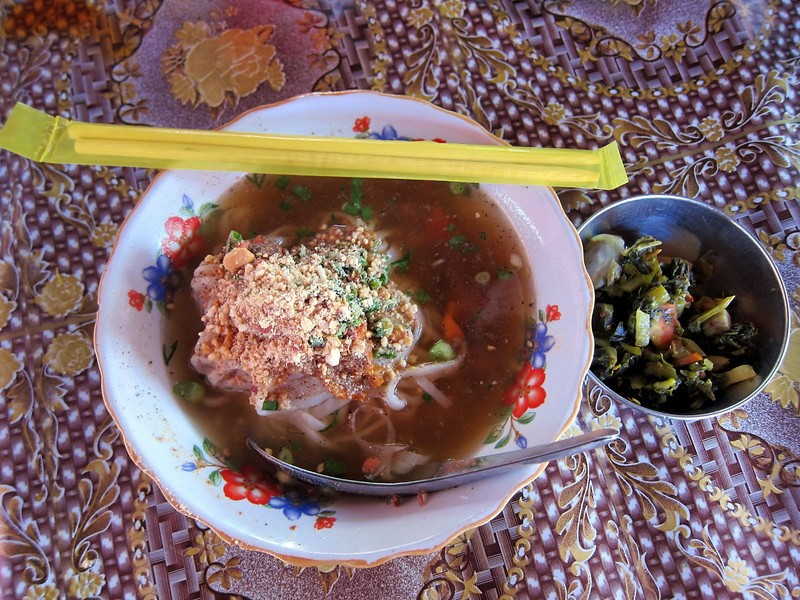 After trying this soup at on the main drag’s night food bazaar, I soon discovered that the same Souplady set up a stall in the main market during the day. Though I vacillated between this delicious treat (for 500 Kyat) and a whole grilled fish stuffed with chili and cilantro (1000 Kyat) during my dinners in Inle, at least one meal per day involved these noodles. Souplady was kind enough to teach me some more Burmese vocabulary, and I invited everyone I met on the lake to try her fare.

Moving on from Inle, I descended past Yangon to the Mon State, and found a Souplady in Hpa-An with this heaping bowl of chicken-filled awesomeness: 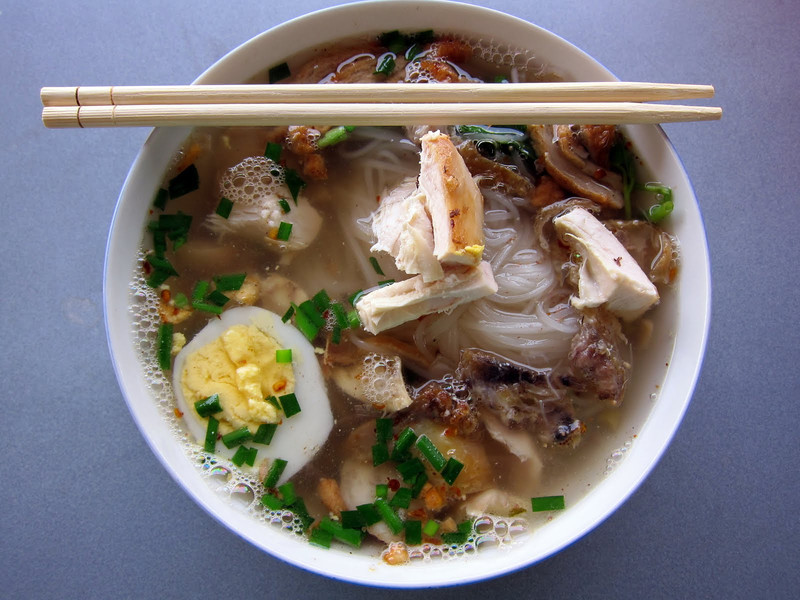 As with most of these Soupladies and their tiny, hidden stalls of wonder, I was the only foreigner in the place. Having been in Myanmar for several weeks already, I had acclimatised to the constant staring – but what makes Burma so special is that such staring is always followed by a bright, genuine smile. Except at this place. Souplady in Hpa-An was not happy to have me in her shop, and furthermore decided that I really didn’t want soup. I wanted curry. As much as I have (and will) wax poetic about many of the foods I tried in the country, Burmese curries rank among some of the worst things I have eaten in Asia. Unduly oily and nowhere near as spicy as they ought to be, they were the one thing I tried to avoid in Myanmar. Thus: no way was Souplady going to prevent me from eating her huge bowl of chicken noodle soup. With the help of several friendlier locals who joined in with my entreaties for souposity, she finally capitulated and slammed this bowl in front of me on the table. And it was delicious: a perfectly balanced broth simmered with white pepper and chili, heaps of roasted chicken and springy rice noodles. Well worth the fight!

Though I planned to head back for Angry Souplady’s fare later in the week, Hpa-An quickly proved worthy of my weeklong stay when I found another Souplady’s street stall, serving spicy, coconut khao swey for only 300 Kyat: 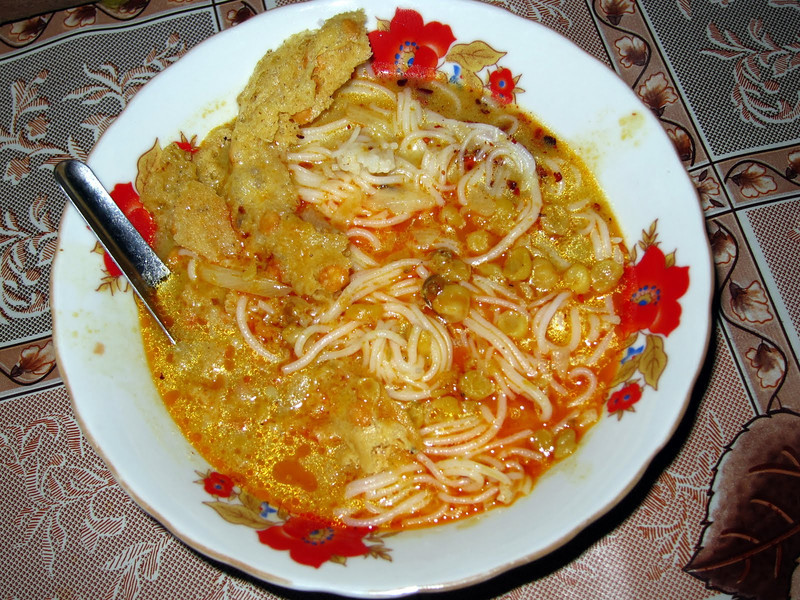 Nearing the end of my time in Myanmar, I decided to prolong my stay in Hpa-An. There were several mountains to climb, a bustling daily market, shrines aplenty and a serious set of food choices. Though my morning meal was open, my nightly ritual quickly included this young lady’s soup. It was served at room temperature, with crunchy bean fritters crumbled inside, a bold, spicy broth and noodles, topped with onions and cilantro.

As Hpa-An is quite small, there was one main backpacker hotel in town – the terrific Soe Brothers Hotel (there is, in addition to the four brothers, a sister – but according to them she is ‘not so nice’ and thus they left her out of the name), and I would gather whoever I had met that day and, pied-piper like, we would head to this stall for dinner. The price couldn’t be beat (3o cents?! Most restaurants were charging upwards of 1000 Kyat for a meal), the Souplady was adorable and the food was great. 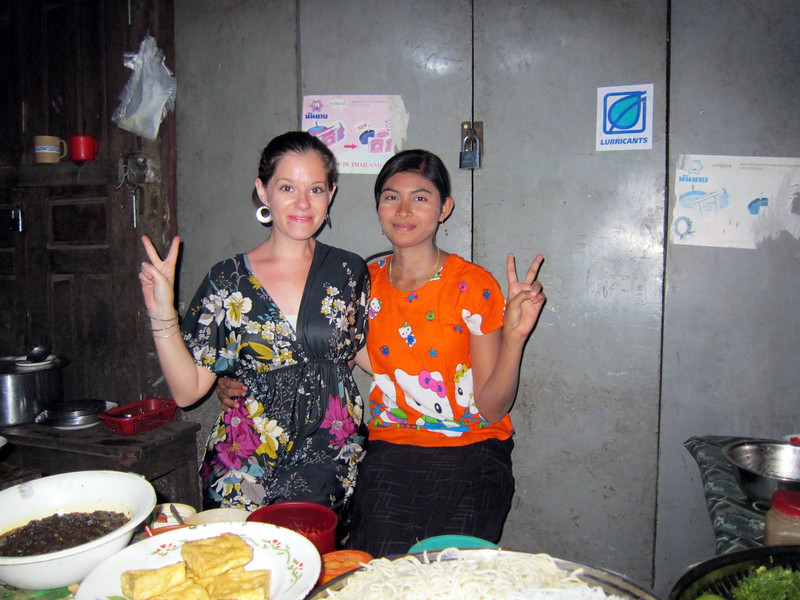 Me and Hpa-An’s lovely khao soi Souplady, on my last night in town.

I could go on. Those of who you who have travelled with me know full well that my obsession with food is fairly perpetual, and that I will often map out my days around the many things I want to eat. Notwithstanding the Burmese curries, I would encourage everyone to ignore the reputation Myanmar has for its food.

With little effort, I found a panoply of wonderful, delicious choices during my stay. From the national breakfast of mohinga to the many varieties of Shan, Mon and Kachin soups, I quickly learnt a lesson that delighted me: in Myanmar, it is always soup o’clock.