My First Week in Chiang Mai

I wasn’t really sure what to expect upon my return to Thailand. In retrospect, my time here last year was a strange and surreal circle, starting with a huge tweetup on the heels of TEDxBangkok and progressing to my unexpected coverage of the Red Shirt protests, to the devolution of those protests from a raucous, festival-like atmosphere to a tense standoff between the government and the protesters, to the resulting army crackdown and subsequent cleanup following a week of arson. And in the lull between the deaths at Kok Wua on April 10 and the day APCs rolled through Silom on May 19, I celebrated Songkran with the rest of Bangkok. My last days in Thailand echoed the initial crash course: dinners and drinks and time with newfound friends. To say I lived a year in one tumultuous spring would be an exaggeration, but it certainly felt that way. It still does.

A return to Chiang Mai

I had no qualms about returning here.  People from home often ask why I would come back, why I wouldn’t look at Thailand in a different, cloudier light. I often say that in choosing a home, even a temporary home, it has to be a place where the things that you dislike don’t get under your skin and the things you like really, truly make you happy. For the moment, Thailand remains that place. For the glorious food, to learn more about the politics and ongoing protests, to improve my Thai, to spend time with people I respect and enjoy. And for the next few months, Chiang Mai will be my home.

I arrived here on Tuesday and spent the week exploring the city with new and old friends. I was still on the fence about living in Chiang Mai versus Bangkok, but sometimes things fall into place so seamlessly that you’d be a fool to ignore the path curling out in front of you. In only a few days here, I found a terrific place to live, made a bunch of new friends (thanks to the introductions from old ones), played miniputt, sang my heart out at karaoke, and came to the satisfying conclusion that Chiang Mai would be my base for the coming season.

Karaoke O’clock in Chiang Mai, with Lindsay & Bessie. Think we had fun? 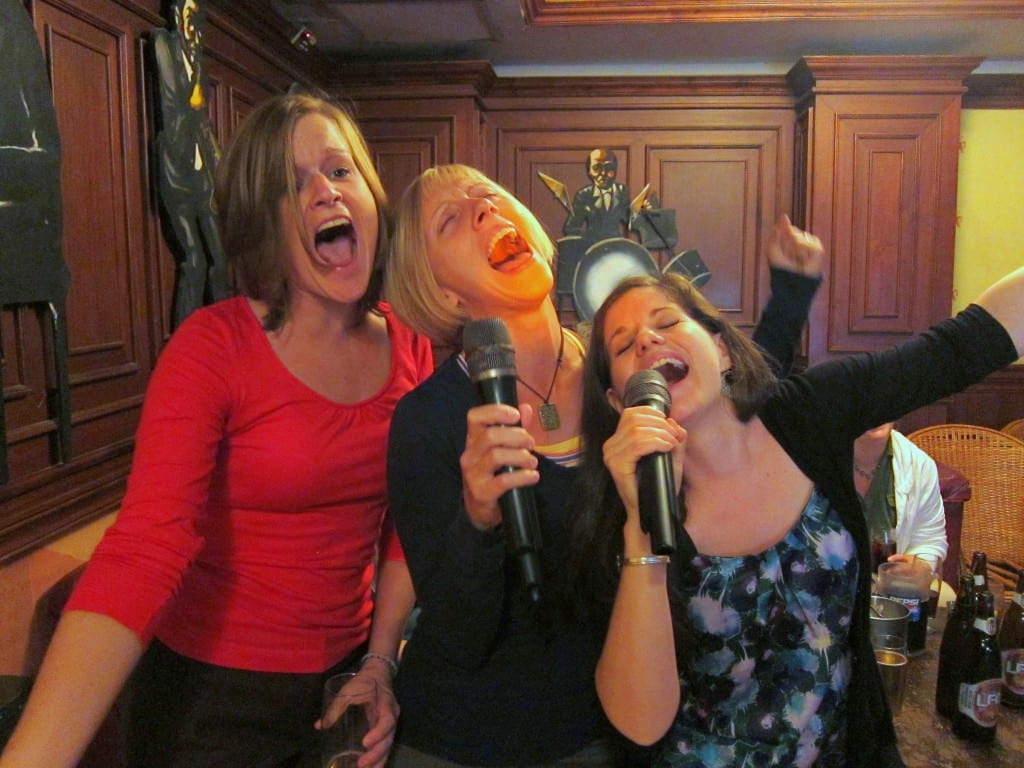 And did I mention the food? 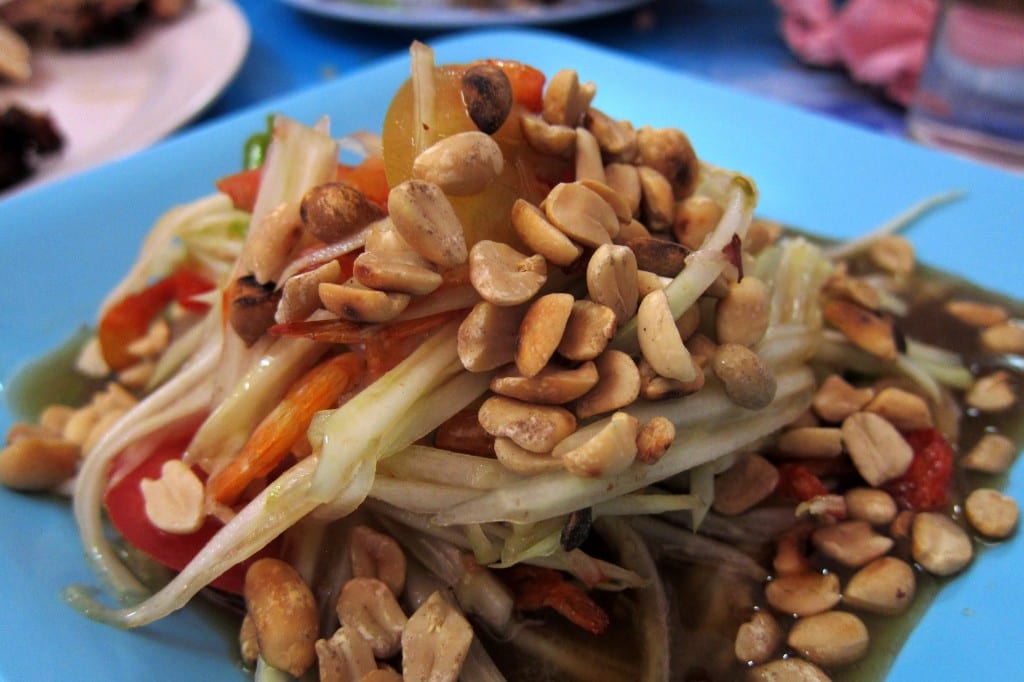 No really, let’s take a closer look at this salad: HOW CAN YOU NOT WANT TO EAT THIS?

Perfect mango sticky rice from mango sticky rice lady. I’ve been warned she only uses the best mangoes and when she runs out, she shuts down for the night. She served the rice with the traditional sweet coconut cream, but hers was warmed up and it made the succulent dish even more perfect than usual: 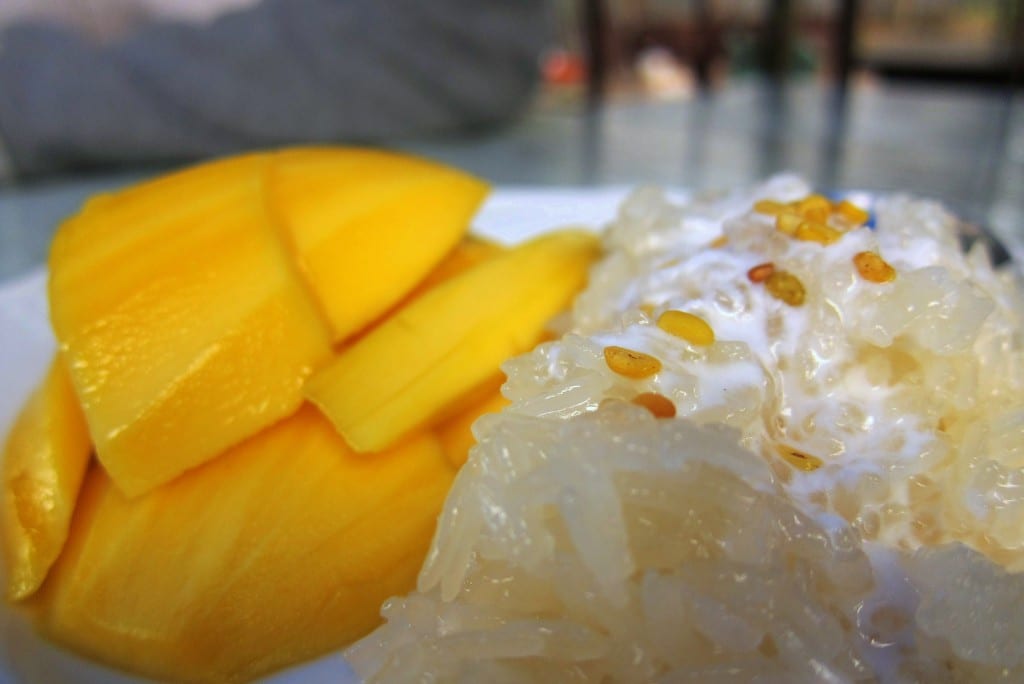 Chiang Mai has a large Burmese community, and I was able to have one of my favourite dishes from my time there: Burmese tofu salad. This is the before (unmixed) and after (mixed up) versions: 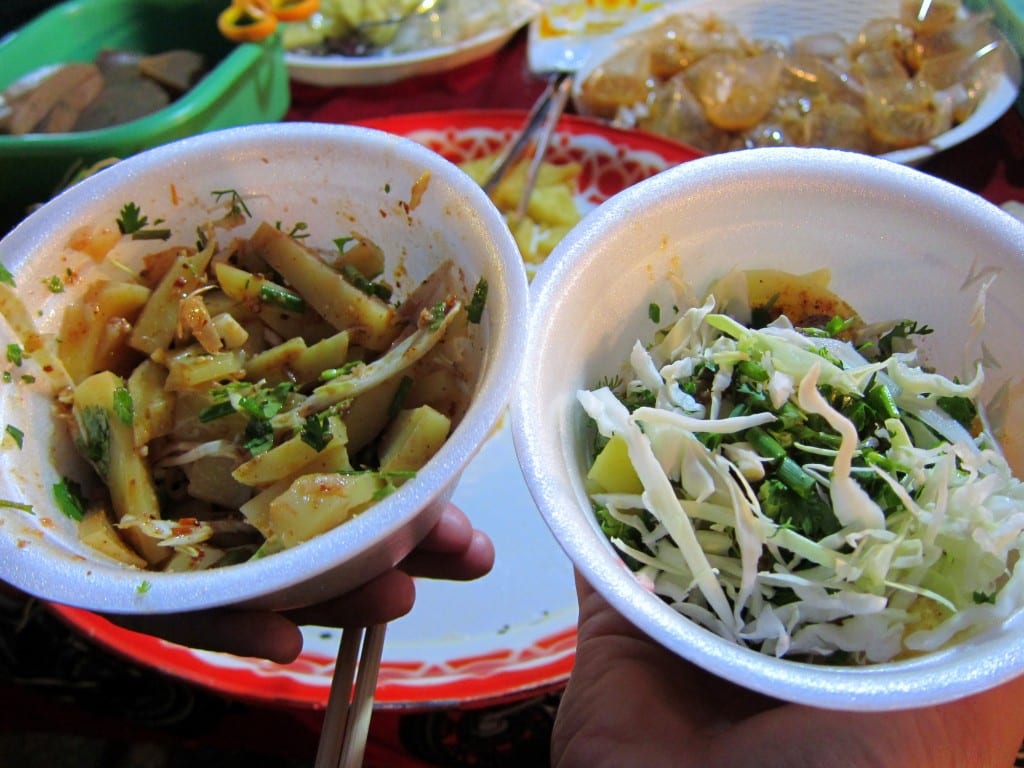 And it wouldn’t be Chiang Mai without its specialty, khao soi! A rich, spicy coconut soup with egg noodles and braised chicken, it remains one of the tastier soups in Thailand. The city is crawling with khao soi places to try and I plan on souping-it-up in my months here. 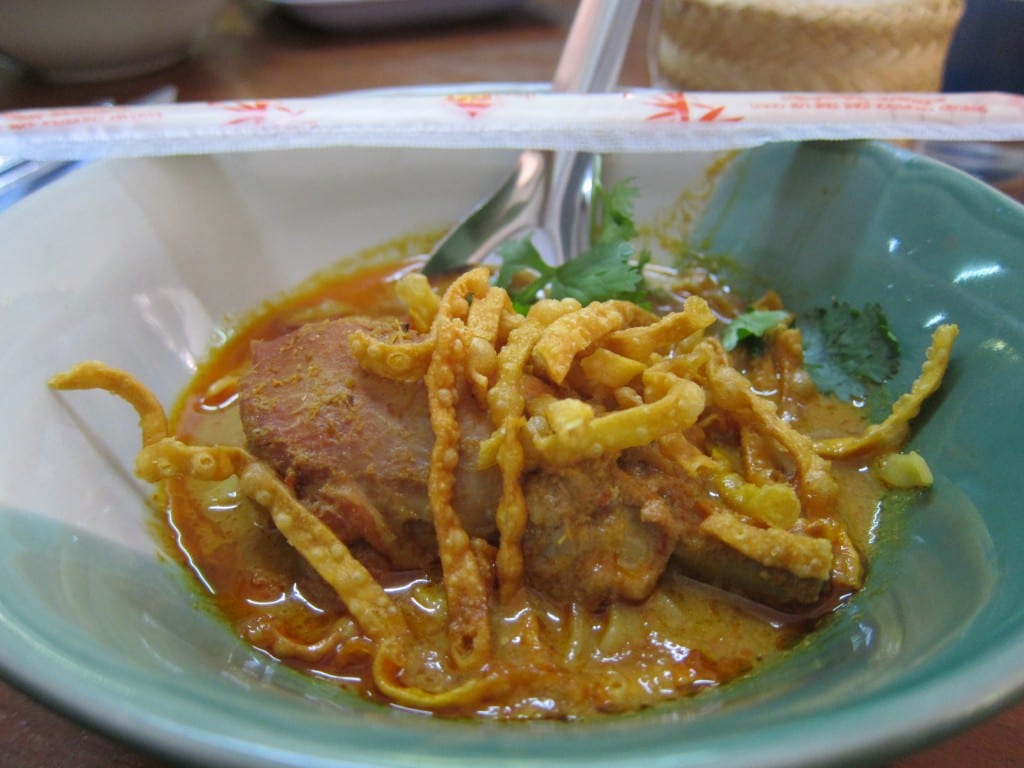 Finally, from the night market near Chiang Mai gate, more food than I know what to do with. I bought a bamboo, noodle and chili dish I had never seen prior. For breakfast tomorrow, obviously. 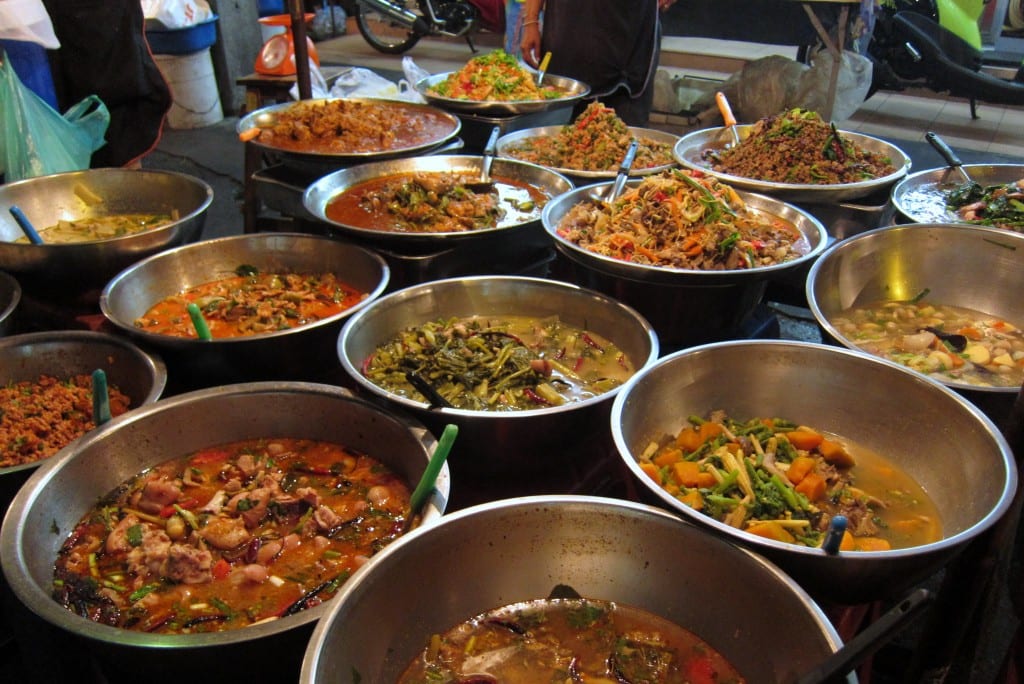 I still miss Bangkok, and I’m looking forward to visiting at the end of the month, but I’m excited to kick off a new year getting to know a new city. I’m also thrilled to be sharing a lovely place with Shannon from A Little Adrift. The apartment just happened to be available a few days after I arrived, and Shannon just happens to be arriving in a week and we just happen to get along well. Though we were both planning to live alone, the apartment was bright and airy and I emailed her to see if she’d be willing to bunk up. As I said prior, everything fell into place in the blink of an eye. We’re both planning to do quite a bit of exploring while we’re here, but after many months on the move, with my belongings in haphazard boxes, I’m very much looking forward to having a home base for the next few months.

Our new place (and its lovely kitchen table – perfect for working!): 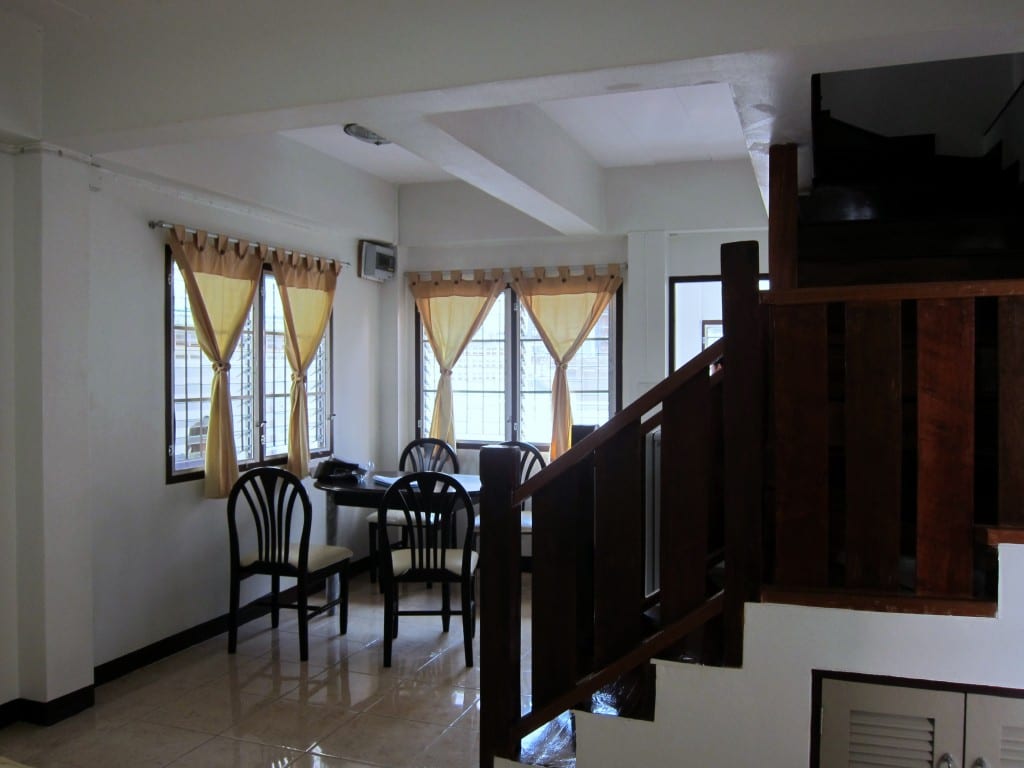 Part of me wondered if I really did feel at home in Thailand or if my opinions were just tinted with the rosiness of retrospection. But only days into my stay, I can safely say that it is great to be back. As first weeks go, this one was terrific. Looking forward to what the coming months will bring.

For anyone else thinking of moving to Chiang Mai, some resources:

70 thoughts on “My First Week in Chiang Mai”