This Legal Nomad is Heading to Thailand

My seatmate on the long flight to Kuwait had never flown over an ocean before this first-ever trip to America. “Do you think we’re over the Atlantic right now?” he asked, breathlessly peering out of the window into the cloud-mottled night. “Soon,” I said vaguely – we just taken off from New York. He’d have to wait a few more minutes. His name was Hasan and he was from Bangladesh. His wide-eyed wonder and enthusiasm for the mere act of going somewhere else was the perfect beginning to a long flight.

Next to him was an Indian man named Vijay. Originally wary of the other, they struck up a conversation and turned their attention to the strangest one in our row: me. Before the seatbelt sign went off, they were already peppering me with questions, faces straining to understand. Why was I heading to Bangkok? What made me think it would be good? What if it wasn’t good? Was the weather better than New York? (Yes.) Was the food spicy? (Yes.) Was I so so scared? (This was accompanied by the now-common refrain “because you know? You are very small.”) Happily they didn’t ask how old I was or about any prior travels, topics that would have likely contorted their already struggling and worried faces into a state of permanent confusion.

So why am I moving back to Thailand?

For starters, there is the food. People who have traveled with me know that it is an obsession of mine. Every destination starts with a discovery of the food markets, a survey of what street food is on offer. But there are very few food-related posts on Legal Nomads, and that’s something I want to change in 2011. In almost every country, I traded street food crash courses for customers, bringing people from my hostel to eat there in exchange for a cooking lesson. I never thought this would be of interest, and did it for the pure pleasure of learning and eating. But enough of you have made it clear that food is an important part of your lives and your travels, so I will be posting more about my culinary adventures going forward. Bring your appetites! 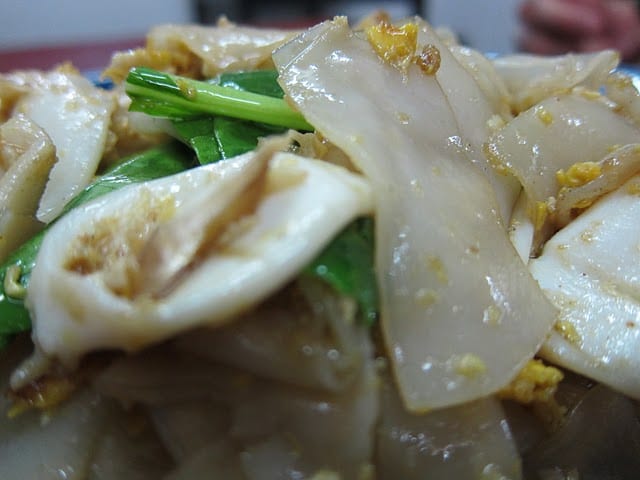 A close second is the people. I met and sustained friendships with an incredibly diverse cross-section of people, both Thai and foreign, during my months of travel and a good many of them are in Thailand right now. I have this wistful fantasy of bringing all my friends in one room, knowing so many of them from a dizzyingly list of places would be fast friends. Such is the struggle with long term travel – meeting and then leaving people is never easy. But for one perfect storm of a season, many of them are in one place, and that place is Thailand. 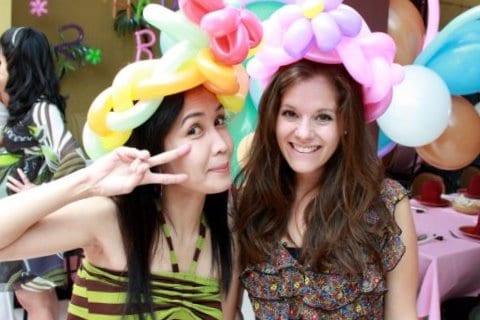 Me and Prae getting our balloon hats on at a birthday party in Bangkok. 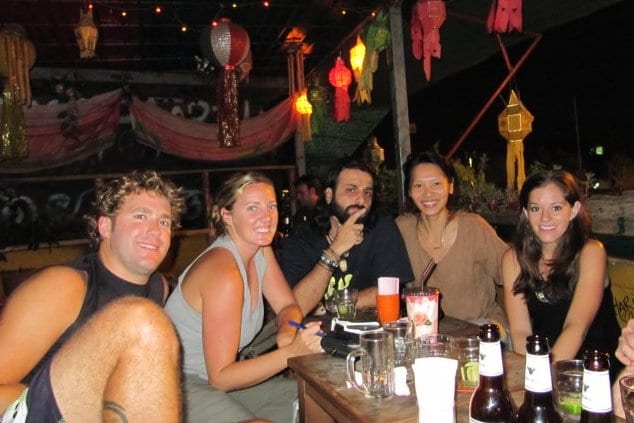 Enjoying the rooftop bar in Chiang Mai with A from Got Passport, Daniel from Canvas of Light and Monique & Steve from Canada.

A slew of other positives made this an easy choice: the cost of living is quite low, the wifi is fairly decent, the clothes fit me (yay!), the weather is good, the fruit is so delicious that I can already taste it, the ‘wee!’-inducing moto taxis provide a small glimpse into a world I’ll never know and the complex, cloak and dagger filled history makes the country even more fascinating.

Oh, and I already had a return ticket – this is the other half of the ticket I bought back to North America in June.

So off I go! I’ll be overseas only through June when I will head to Portland, Oregon to speak at Chris Guillebeau’s World Domination Summit. From there, likely to TBEX’11 in Vancouver, and hopefully some time in San Fran thereafter visiting Neda, who you last saw way back in Chile at the start of my trip.

Some fun projects planned for 2011 as well, which I’ll announce later this month. In addition, I’ll be starting a series called Thrillable Hours (thanks to Kevin for the name). highlighting lapsed (or formerly lapsed!) lawyers who’ve done some interesting things. My slogan is “proving that even lawyers can have fun”, and there are plenty of us out there doing just that. I’ll be kicking off the series this month. If anyone has any lawyer friends doing something interesting – be it practicing somewhere very different (like my first Thrillable Hours subject, Jeremy, who practiced in Afghanistan), working for a nonprofit or having left the profession altogether – send them my way!

Closing out with a quote is not usually my style, but this one from Terzani captures the feeling of excitement and renewal that still accompanies me when I travel, even today in returning to a place I already know and love:

Every place is a goldmine. You have only to give yourself time, sit in a teahouse watching the passers-by, stand in a corner of the market, go for a haircut. You pick up a thread – a word, a meeting, a friend of a friend of someone you have just met – and soon the most insipid, most insignificant place becomes a mirror of the world, a window on life, a theatre of humanity.

No matter where I go or how completely foreign and inaccessible it feels, I’ve learned to trust that this theatre of humanity will unfold with time. I’ve learned to be patient and wait, instead of forcing myself to check items to see off a list. And I’ve realized that I can learn something – about myself, about generosity, about suffering, about the world – from every single person I meet.

UPDATE: greetings from Chiang Mai! First, jetlagged night in town I still managed to squeeze out enough energy for a dinner with friends & a typical motorcycle ride to bed: 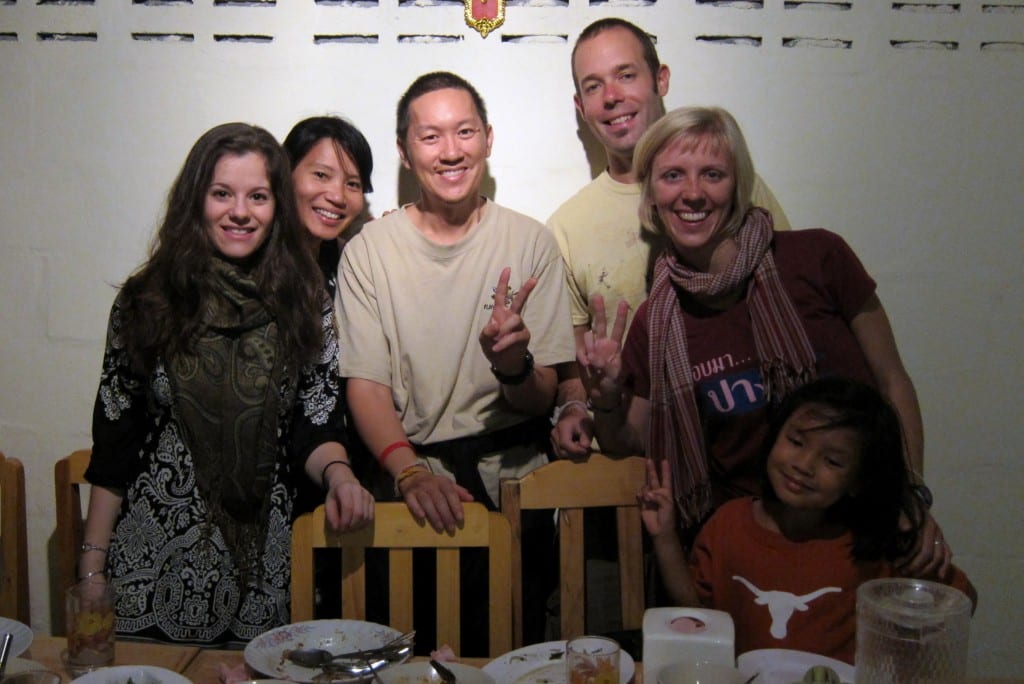 Bessie & Kyle from On our Own Path, the Got Passport family & me at dinner in Chiang Mai. 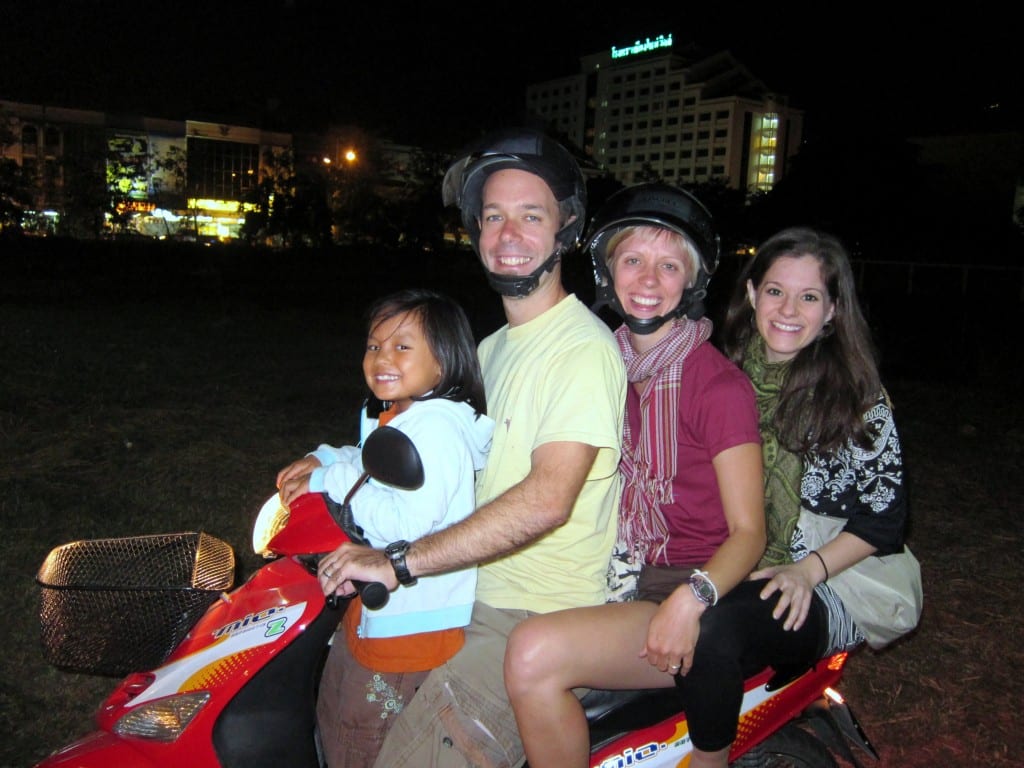 51 thoughts on “This Legal Nomad is Heading to Thailand”