I met an Argentine couple at Bangkok’s Suvarnabhumi airport while I was on my way to join Cale in Bohol. The man had lived in the Philippines for over 11 years and was bringing his now-girlfriend to see his former home. He had wonderful things to say about a slew of diverse destinations – all of which proved to be well worth visiting – but most of his gushing was reserved for Palawan. I, of course, had barely planned to be in the Philippines, let alone stay here long enough to visit a remote island above Malaysian Borneo, but filed his advice away for future reflection. At some point in the prior 60 days, I stopped trying to figure out where to go next and started to figure out how to stay in the Philippines longer. During my month in the Visayas and Northern Mindanao, I crossed paths with other travelers who ranted and raved about how special Palawan was, and having extended my visa through the end of April, I decided to fly to Puerto Princessa, the capital of Palawan, in order to find out firsthand.

My first impression of Palawan was that it is beautiful. Not just beautiful in a pat-on-the-head, quotidian way, but tirelessly, superfluously stunning, even when the clouds roll in angrily and blinding lightning replaces the scorching sun. Palawan is aggressively teeming with beauty, and just when you think you have seen it all, you turn a corner in your banca and a new island paradise awaits. The island covers almost 2000 km of land, much of it uninhabited and most of it covered in jagged karst rocks and tufts of tall, emerald trees. Transportation on Palawan is nonexistent in a traditional sense; while there are jeepneys or boats or buses heading from one place to the next, onward travel often involves several transfers and a long, unpaved, muddy stretch of road. There are cargo ferries that depart Manila’s sketchy North Harbour once or twice a week for Puerto or El Nido, but most tourists opt to fly from Manila or Cebu to Puerto Princessa and slowly (because everything runs on its own time here) trudge their way northward to Coron. The South part of the island is rarely touristed; transportation is even more irregular there and its proximity to Borneo (and Borneo’s mosquitoes) has resulted in a steady increase in malaria cases, both serving to deter most travelers.

So Where is Palawan? A long island reaching northward to Mindoro and southward toward Malaysian Borneo, Palawan is bordered by the South China Sea to the west and the Sulu Sea to the east.

People say that Palawan is known as The Philippine Frontier, and it is easy to see why: the rugged coastline, untouched inlets and bays and frustrating inability to get from A to B without scratching your eyes out all contribute to its standoffishness – and its charm.

Sabang and the Subterranean River in Palawan

The capital of Puerto Princessa was a good starting point for my exploration of Palawan, but it remains a city – albeit a clean, comfortable city with cheap food – and I was eager to depart. First stop: Sabang, gateway to the 8.2km subterranean river, located within a diverse national park. Sabang itself is a small town camped out on the edge of the of the South China Sea, with one or two toro-toro restaurants (Tagalog for “point-point” because that is what you do to choose your food), a slew of souvenir shops and – of course – several karaoke bars and an arena for the cockfighting derbies. It was also the Sabang Fiesta the day I arrived, so there were swimming competitions, coconut-bashing competitions and cockfighting derbies rolling through the night. Fiesta aside, there is little to see or do in Sabang other than the subterranean river and national park – but I did stay at the incomparable Dab Dab Resort, hands down one of the nicest hotels I have found on this journey. For 650 pesos (400 for a shared bath) your room consists of a beautifully handcrafted wooden bungalow, with screening instead of walls to let in the breeze. Since the electricity only goes on from 6pm-midnight, the cross-breeze is the only thing saving you from roasting in bed. The bathrooms were impeccable – tiled, clean and beautifully laid out. The kitchen is run by Mila, a smiling woman with a killer vegetable curry. I’ve since sent dozens of people to stay at Dab Dab and everyone has written to say how much they enjoyed it. Extra bonus: it isn’t in the Lonely Planet so it wasn’t packed with people.

Back to Sabang. To get the underground river you can either take a banca or hike one of two trails, the monkey trail or the jungle trail. I opted for the hike, 5.7km each way, with the trail winding through limestone cliffs, jungle, caves and a mangrove forest to the yawning mouth of the river. In what turned out to be the most endearing memory of my time in Sabang – more so than the river itself – I was joined by two young Filipino boys, aged 17 and 21.

My two new friends; the entrance to the Underground River: 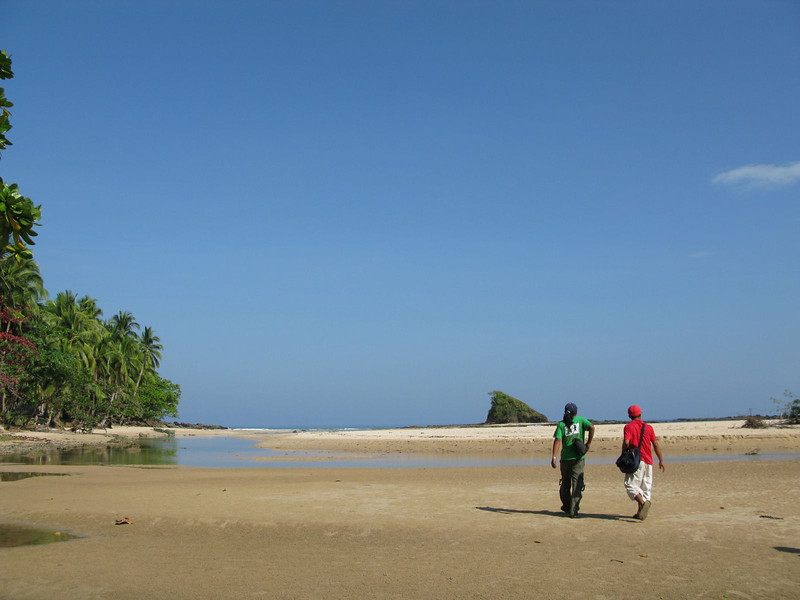 The two boys were surprised that I was doing the hike instead of taking a boat, but being from one of the tiny outlying islands, they couldn’t afford the boat themselves and asked if they could hike alongside me. The questions began almost immediately: Where was I from? Where was my husband? Why was I hiking instead of taking the boat like the ‘other white people’? Where was I headed next? Did I like the Philippines? As the kilometers started to add up, their questions became more focused and their incomprehension more palatable. They wanted to know about marital life in Canada and were appalled to hear that divorce was not only legal, but fully accepted and extraordinarily prevalent.*

They wanted to know when Canada’s wet season was, so I explained that we had four distinct seasons and they did not match up to the seasons in the Philippines. They did not understand how we didn’t have summer in April and May, like they do here, so I explained the northern/southern hemisphere divide and how seasons mirrored each other in opposites depending on which one you were in.

The whole “winter is cold and not just wet” thing particularly resonated. After a pause, they started to ask where exactly Canada was – close by? Not close by? – and so I stopped near the entrance to a cave and drew a rudimentary world map in the sand, pointing to where they were and where I came from. Their shock was so disarming that I summed our situation up thusly: in Canada, we do not grow rice, and we do not have buko (coconut) trees. They were silently contemplative for the rest of the hike.

*It is important to note that their reaction was not a moral judgment but a reflection of the fact that divorce isn’t just illegal in the Philippines – it doesn’t exist at all. You can pay 300,000 pesos (approximately $6300 USD) to get your marriage annulled under the Catholic Church, but annulment is universally unaffordable for the general population. As a result, people will marry, separate and remarry – without any real legal grounds to do so. Child support and/or alimony are essentially unheard of outside the upper classes in Manila or Dumaguete and thus you end up with exceptionally complex and layered family arrangements.

The underground river was as pretty as the pictures would suggest, albeit slightly off-putting due to the staggering volume of tourists also queuing to float on through. We hiked back to Sabang via the Monkey Trail, in time for me to bid my curious friends adieu and indulge in a delicious curry fish dinner courtesy of the talented Mila.

A teeming mass of baby bats inside the river: 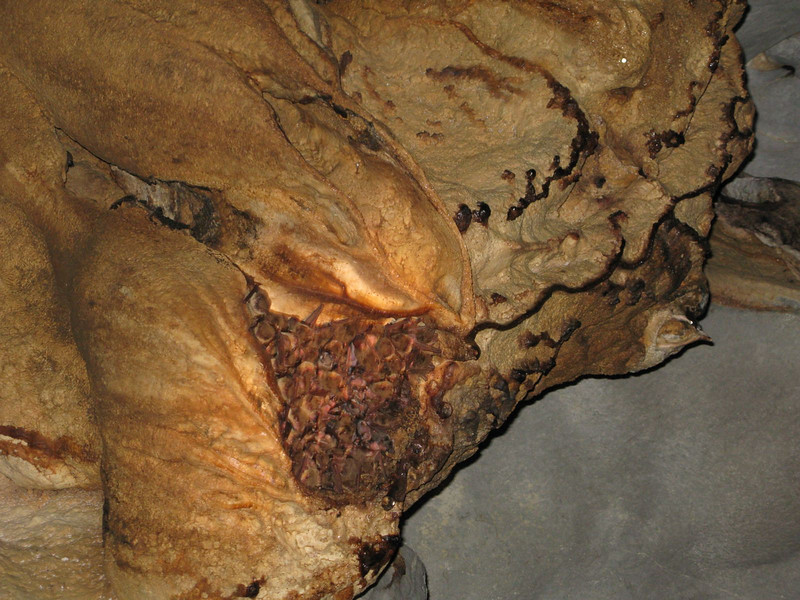 Next up: Port Barton, Palawan – where it rained all day, every day.