As I noted in the introduction to the series, Thrillable Hours wasn’t meant to be a stab at the practice of law as a whole, but rather a demonstration of unconventional career paths. Most of these paths will be outside the practice of of law, but some – like Sébastien – are inside of it.

Sébastien is a good example of practicing law in a way that both fulfills a passion to make the world suck less, and also maximize the ability to be part of the solutions that do so. He is currently the director of the One Justice Project, but as you can see from his extensive bio, he wears many other hats. I’ll let him take over in his own words, but I hope you find this other side of the coin refreshing. There are many opportunities outside private practice, some of which include exciting projects like the ones detailed below.

What made you decide to pursue a career in the public sector instead of private practice?

Your question prompted me to re-read my admissions essay to McGill law school, where I wrote “the law is within our society a means to justice and thus a way to help people” and that “I still have faith in our society and its system and I believe that by entering the legal profession I may be able to help people in need and right our society’s wrongs.”

I wrote that essay when I was 18, still inspired by the Sartre, Camus, and Dostoevsky that I had read as teenager and accordingly committed to the ideals of justice and public service. I look back on that statement more than a decade later and I have of course developed a more nuanced and sophisticated view of the legal system. And yet, I can’t help but maintain my faith in the possibility of change and my commitment to being part of solutions that help people. There is no rational explanation for this. It merely reflects a deeply-held feeling, one that is expressed by a character in The Brothers Karamazov: “[Y]ou must realize that everyone is really responsible for everyone and everything. I don’t know how to explain it to you, but I feel it so strongly that it hurts. And how could we have gone on living and getting angry without knowing anything about it?”

Why choose law rather than any other field?

I remember reading a 1998 decision of the Supreme Court of Canada: Vriend v. Alberta. Vriend was a teacher who was fired from a high school in Alberta because of his homosexuality. He had no recourse under Alberta’s human rights code because the government of Alberta had specifically omitted sexual orientation as a form of unlawful discrimination. A majority of the Supreme Court found that Alberta’s failure to include homosexuality in its human rights code was a violation of the Canadian Charter of Rights and Freedoms and it added sexual orientation as a ground in the code. At the time, I was really impressed by the power the Supreme Court had exercised to remedy the Alberta government’s failure to protect the rights of an entire category of citizens. But I also remember being impressed by the intellectual beauty of the majority decision itself. The majority pointed out that the Alberta government’s omission was fundamentally inconsistent with the stated objective of its own human rights code, which was to protect the rights of all Albertans. I decided after reading this decision that I needed to go to law school.

There are elements of timing and chance in all of this. In 2009, I was part of the team that put together Amnesty International Canada’s legal intervention before the Supreme Court in a case concerning Omar Khadr’s request for repatriation from Guantanamo Bay. To our great disappointment, the Supreme Court turned Khadr’s request down and left him without a remedy. I doubt that this is the sort of decision that would have compelled the 18-year-old me to attend law school!

What do you find most fulfilling about your current position with the One Justice Project and your work as an international human rights lawyer?

I was a key part of a 3-year international process of research and consultations, supported by the World Future Council and the Centre for International Sustainable Development Law. The process concluded that the world needed to define a new set of crimes: crimes against present and future generations, to end impunity for serious violations of economic, social, cultural, and environmental rights. What I find most fulfilling about my work with the One Justice Project (1JP) is that I am doing everything I can to make this idea a reality. I have put my money, my time, and my reputation behind the initial development of 1JP and the only thing that keeps me going in the face of the monumental task that lies ahead is a belief that this is an idea whose time has arrived.

It may not happen soon or in the particular way that we have devised, but it will happen in some shape and form one day. At the moment, we are focusing on the 2012 UN Conference on Sustainable Development (also known as Rio+20), which will be held in Rio de Janeiro in June 2012. We are working to put together a civil society coalition to draft a declaration on crimes that undermine sustainable development, crimes such as discriminatory denials of access to food, water, healthcare or education. And then we will ensure its global release around the Rio+20 Conference.

The other thing I find fulfilling is that I’m going beyond my usual professional comfort zone focusing on advocacy and awareness raising. I’ve really only begun on this journey and I’m working with a small team to formally launch 1JP and our Rio+20 Campaign later this summer. In that spirit, if anyone is interested in helping out with 1JP, please send me an e-mail: sjodoin-at-onejusticeproject.org.

Do you have any advice for professionals who are interested in leaving a private law practice but concerned about what is out there?

I can certainly understand that professionals, especially ones who have family obligations, are not always in a position to take significant risks with their careers. However, by definition I think you have to be willing to take risks and make sacrifices when you attempt something audacious. And at some point, you have to get started and be uncompromising about accomplishing your goals. Unless you seriously commit to being “out there,” you will never get there.

This reminds me of the time last year that a lawyer working in a big firm contacted me for advice about getting a job at the UN. We agreed on a meeting time, but she eventually cancelled – she was too busy with work. So, you either want to do something or you don’t.

Of all your work experiences post law-school, which ones most shape you worldview today?

I can point to two experiences that have been particularly meaningful. In 2006-2007, and later in 2009, I worked at the international criminal tribunal set up by the United Nations to try the perpetrators of the Rwandan genocide. It was a very valuable and rewarding experience professionally. But what has most stayed with me from my experience living in East Africa and working on genocide cases is the resilience, courage, and dignity that communities and individuals can retain in the face of incredible adversity and great suffering. I also learned as well that most of the things that people worry about on a day-to-day basis in the West are relatively insignificant.

In 2008-2009, I worked at Amnesty International Canada, assisting with litigation, advocacy, policy and media. It remains the most fulfilling year of my professional career. More than anything else, working at Amnesty taught about the role and impact that individuals have in creating change. I had a very elitist, high-level vision of policy change before I came to Amnesty, which I had developed after participating in international negotiations for many years. I left Amnesty with a renewed respect for the critical importance of creating a constituency for change at the grassroots level and the hard work that this sort of activism requires. 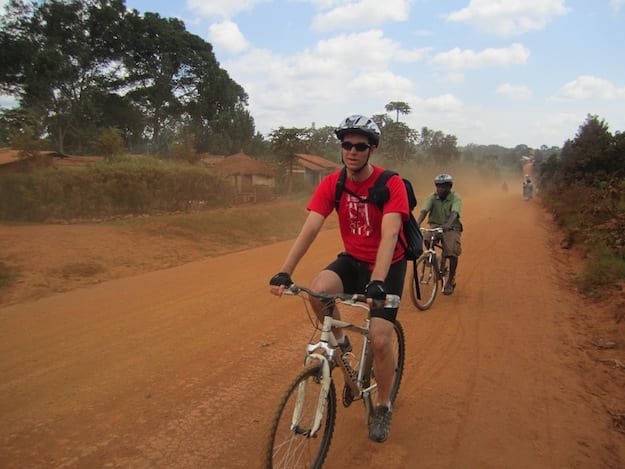 Is international law tourism for lawyers?

It’s undeniable that travel can be a side-benefit of international legal work. Last year, after the review conference of the International Criminal Court in Kampala, Uganda, I had time to go river-rafting on the Nile and hiking in Rwanda. But my trip to Indonesia for climate change negotiations in 2007 is more typical: I only had the opportunity to visit the airport, my hotel, and the conference centre. I did not even get to see the ocean. But I wasn’t there for the beach and that is the point.

Traveling is important to the work of an international lawyer because the personal interactions that take place at international negotiations and meetings are really important to the process of building consensus and reaching agreement. As well, proper experience in the field can be invaluable for understanding the challenges on the ground and keeping your priorities straight. At the same time, international lawyers and advocates should not forget about the importance of creating change in their own countries and communities.

Although it is more often rewarding, working for change as a lawyer has its frustrations and disappointments. As a result, most of the lawyers I know that work in human rights and environmental law know how to have fun outside of work and place a high premium on sarcasm and irony. Although we all can’t become comedians or film-makers (two lawyers I know are doing these things now [Ed. Get them over here for Thrillable Hours!]), it’s not sustainable to take everything too seriously either. I also have to assume that a lot of what happens in politics in Canada and elsewhere is meant to be dark comedy; otherwise I might very well lose faith!

Sébastien Jodoin is a lawyer specialising in international law, human rights, environment, law and development, legal empowerment, sustainability, climate change, and transitional justice. He is the Director of the One Justice Project, a Lead Counsel at the Centre for International Sustainable Development Law and holds Fellowships at the Canadian Centre for International Justice and the McGill Centre for Human Rights and Legal Pluralism. He has worked at Amnesty International Canada, the United Nations, and the McGill International Criminal Law Clinic. He is currently completing a PhD at the Yale School of Forestry and Environmental Studies, where his research focuses on the links between human rights and the environment. You can also follow him on Twitter.