To Russia With Love

There is something utterly spellbinding about the Trans-Siberian Railway. The brutally hot summers in the Gobi desert, the terrifyingly cold winters in Siberia and the sheer massiveness of 10 time zones in going from Point A to Point B all contribute to the magnetic appeal of the trip. After seeing a documentary on the trains well over 15 years ago, I knew I had to make them a possibility sometime, and I’m beyond excited* to take off for Russia tomorrow in order to begin the tri-country trek. With a wonderful summer in NY under my belt, I’m thirsty for the delicious silence of Gobi desert (and horses – lots and lots of horses**) and the vastness of the Siberian wilderness. I will be spending nights in Mongolia with nomads in traditional ger huts, and with local families in Listvyanka (hopefully sampling omul) and – more than not – I’ll be sleeping on board the Trans-Sib trains.

Contrary to popular belief, the Trans-Siberian Railway doesn’t actually stretch the distance from Russia to China. The trip that I will be taking, comprising Russia and Siberia (including the supernatural Lake Baikal, the world’s largest freshwater lake), Mongolia and China, actually consists of three separate rail routes. The Trans-Siberian route starts in Moscow and ends in Vladivostok, 9,289km away. From there you can head to North Korea or Siberia/Mongolia. I will be going for Option B and taking the Trans-Mongolian line (starting at 5,655 km from Moscow and continuing a mind-numbing 7,865km to the Chinese border) through Sukhbaatar and Ulaanbaatar (with side trips into the Gobi desert), and then crossing into China at midnight via Erlian and heading straight for Beijing on the Trans-Manchurian line. Because the Chinese/Mongolian border crossing isn’t that far from Beijing, I’ll be taking that train straight to Beijing’s central station, winding through the rice terraces as I go. However, I’ve been warned that the gauge on the railroad tracks differs in Russia/Mongolia and China, and thus it’s really a 5-hour “midnight crossing” since the the trains’ bogies must be readjusted for the route ahead. 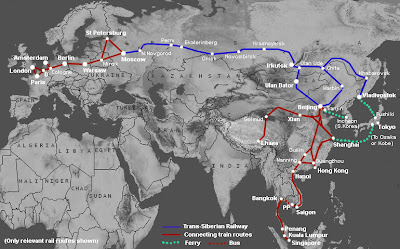 Looking at the guidebooks, the most potentially hilarious (if by “hilarious” I mean “holy shit I missed my train”) aspect of the trains is that all of the Russian trains – ALL of them – run on Moscow time. So when I have a 3pm train from Irkutsk, it means 3pm MOSCOW time, despite the fact that it will actually be 8pm in Irkustk. I will be joined by my friend Bryce for this portion of the trip and one of us will need to keep one watch set to Moscow so that we don’t end up stranded on a train platform in the middle of Siberia. To make time-telling that much more interesting, both Mongolia and China also have one time-zone each – despite their enormous size. The trains run, on average, about 60mph – meaning that we’ll have no shortage of time on the trains to drink vodka (they don’t call it the vodka train for nothing!), play cards and soak in the scenery as we chug across Russia, Siberia and Mongolia.***

Once we hit Beijing at the end of September, Bryce will head back to the USA and I’ll be on my own in China. I’ve spent a month there before, but only in the Southwest (Emei Shan, Chengdu, Yanghuo, Guilin, Nanning, etc.) and am looking forward to eating my way through Beijing, Shanghai and Xi’an and – if my ankle can handle it – climbing Mt. Huashan and Yellow Mountain.

That’s it for now. I’ve been told that Blogger is blocked in China and Russia, though rumour has it one can upload entries, just not actually read the final post. As a result, I’ll either post without being able to properly spellcheck or I’ll email entries to my brother (Cale) to upload for me. Either way, more to come on my Trans-Siberian railroad adventures!

*** My “need to pack” list now includes a smattering of new items: a heatproof mug (hot water is the only free item on the trains), coffee sachets (only tea is available on the trains), ramen noodles (cheap meals with the free hot water available) and spork.