No discussion about returning from a prolonged period abroad is complete without thorough time devoted to reverse culture shock. And within the larger folds of a discussion about reentry, the conversation inevitably turns to perspective. Specifically, that people don’t seem to have any. Of course this isn’t a fair statement, but coming off of long-term travel to the developing world often leaves you in a fastidious state of mind. However, there is something to be said about travel also crystallizing your perceptions, honing suspiciously naïve sentiments into firm sets of belief. Even within the context of culture shock, it can help keep life in perspective. And if you concentrate enough, it can help mold you into the person you strive to be.

During my time in Burma, I spent a week in a tiny town called Hpa-An. Staying put for so long wasn’t in my plans, but something happened my first night in town that changed the connection I felt to the tiny village in Burma’s Kayin State. That something was this: 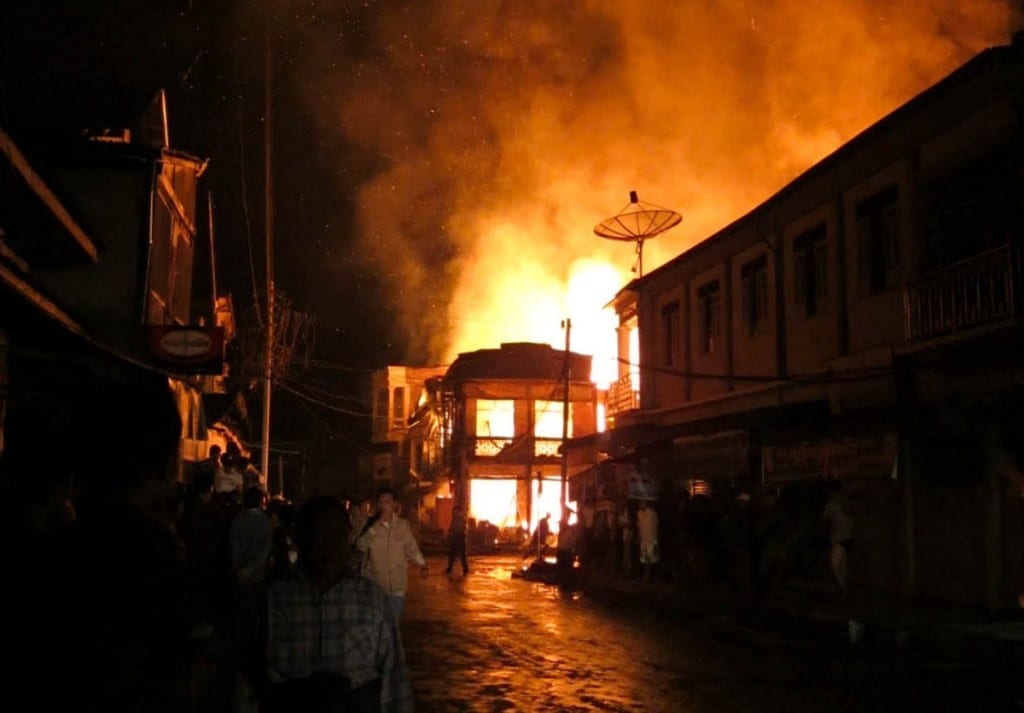 I was exhausted when I arrived, coming off of a fairly ridiculous gauntlet of nightbus to daybus to tuk-tuk. I checked into one of two places in town licensed to house foreigners and joked with the other tourists that I was going to sleep at 7 and if they didn’t see me in the morning, it merely meant that I was planning to sleep thorough another day. I went to sleep at dusk and woke up to faint screams and panicked scurrying in the attic, the Rakhine boys who worked at the hotel trying to stuff their belongings into a bag. Disoriented, my mind in still cobwebbed from sleep, it didn’t register that the air was thick with smoke. I tumbled out of bed and ran down the three flights of stairs to the street. Several buildings were on fire, and given that much of the town was made of wood and that it had no fire station, people assumed the worst. Next door to the hotel was a doctor’s clinic and women ferried in and out carrying supplies to waiting trucks. Grabbing the most expensive ones they could find (a microscope, medication, laboratory equipment), hoping to save what they could. One woman stopped to catch her breath. “This is all,” she blurted out, roughly gesturing to the chaos behind her. The hotel owner explained: no insurance, no savings. If her clinic went down, so did everything she had. 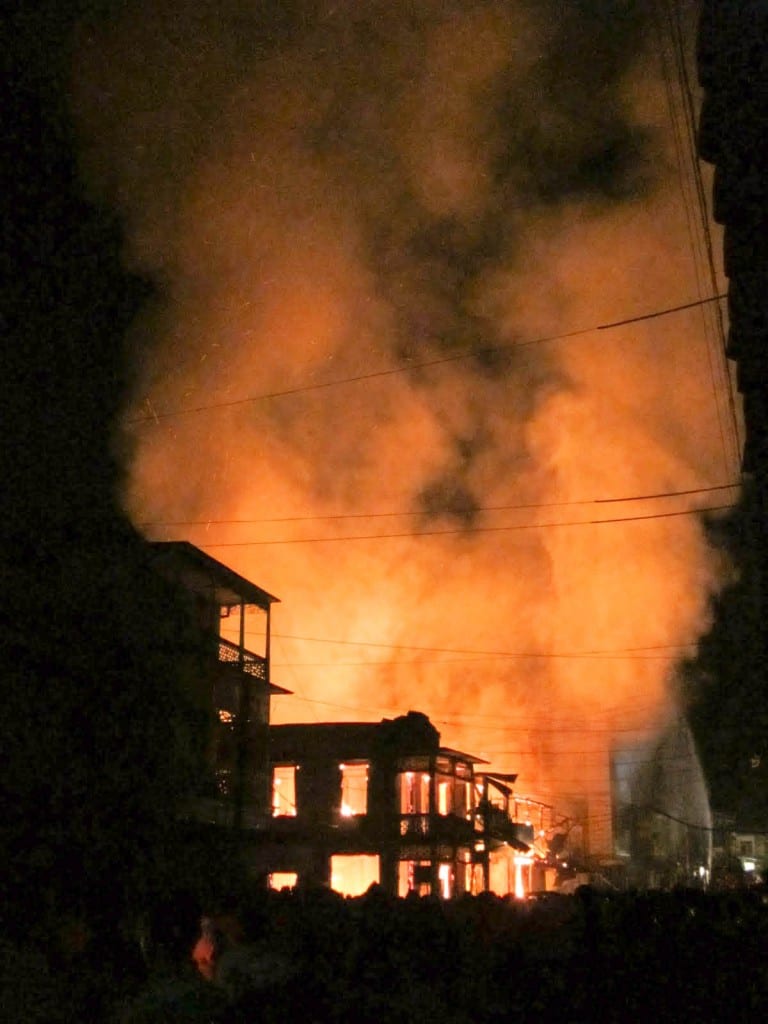 One of my closest friends returned from a contract in Ghana only to find he wasn’t empathetic to his friends’ complaints about the weather or traffic. They called him irritable; he called them snobby, told them they lacked perspective. His friends did have perspective – it just wasn’t along the lines of what he was prepared to digest. It was embodied differently: less stark, less earnest, but nonetheless present. I gently suggested that he lacked some perspective too; in straddling the world between Africa and the States, he couldn’t relate to either. Having returned several times during my years of travel, I understood where he was coming from. I remembered the frustration of knowing that my mental state didn’t jive whatsoever with those around me. I remembered looking out at the Brooklyn Bridge and thinking “I’m over this. Where’s the sticky rice?” But as I slowly seeped back into the world I used to know, those ragged edges smoothed and conversations became easier. I learned to enjoy the Brooklyn Bridge again. (But I still missed the sticky rice).

Which brings me back to Burma. 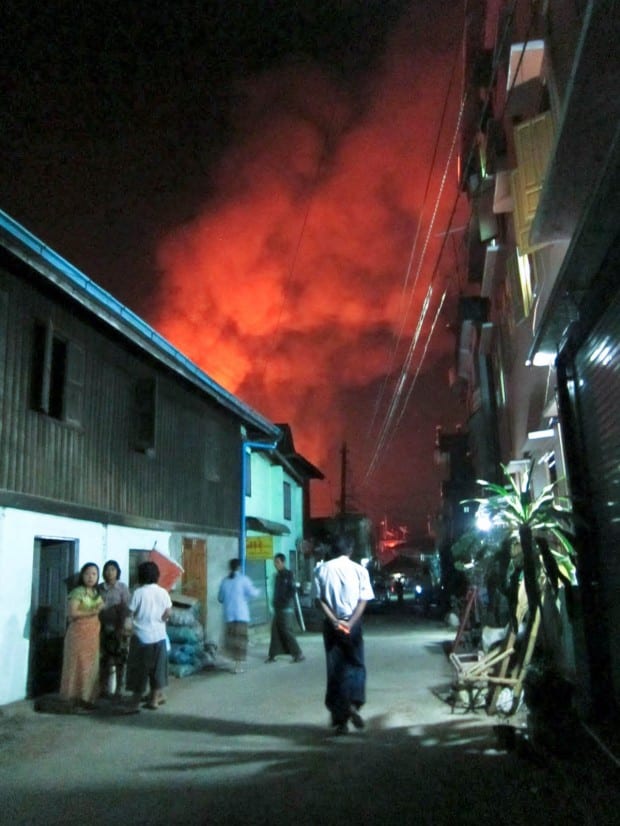 During that sleepless night as the fire spread through Hpa-An, the few foreigners in town ran out to help. Of course we did! We offered to carry water, to help evacuate, to carry goods from store to store. And as I ran around I told myself to remember this moment for when I got home. Why? Because I knew that in going home I would get caught up in the resentment of feeling like I didn’t belong. I knew there would be moments where I would fail to see the forest through the trees. I wanted to remind myself of the invaluable perspective I gained by being present in Hpa-An, that floating-above feeling of seeing one life as part of a wider tapestry.

And you know what? When I lost all of my travel memories in a robbery back in the fall, this is what I remembered. Hpa-An. Hpa-An and all of those other hairline moments, tiptoeing the tightrope between life and loss, many of which I’ve never written about. It’s not a matter of sanctimony – believe me, I cried serious tears when I found out those photos (along with my laptop and camera and hard drives) were gone. But in keeping these moments close, in trying to cross-reference where I am with where I’ve been and the lessons I’ve learned, I keep my own perspective intact. Remind myself of what really matters in life. This isn’t why I travel, but it is important; it keeps me calibrated. Whatever aggregate frustration or culture shock or negativity I’ve built up, even when things feel like they’ve hit rock bottom, it could always be worse. This is one of the many gifts that travel gives us. We always say “try to put yourself in their shoes to understand.”  But when your travels necessitate that you do so – be it for a moment, or a week or a sleepless night in a tiny river town –  the comparison solidifies into something you can come back to, time and time again.