After Three Years of Travel, What’s Next?

It feels like yesterday that I sat down to write a post celebrating two years on the road, one that has remained the most popular of everything I have posted here on Legal Nomads. I was in Chiang Mai as well and remember sitting blurry-eyed in front of a computer screen at an internet cafe near Chiang Mai University thinking “do people really care why I quit my job to travel the world?” Apparently people did, and they still do.

An important lesson for me: while sharing experiences and shiny photos is definitely the backbone of a travel blog, sometimes your readers want to know a bit more about you. Since then, I’ve continued with photos of food and urban decay in Yangon, of misadventures in transportation and a seriously funny language mistake. But I’ve also occasionally dipped into the personal and those have been the posts that have seemingly resonated with my readers. Honestly, while they were hardest to write, they remain posts that I am proud of too. 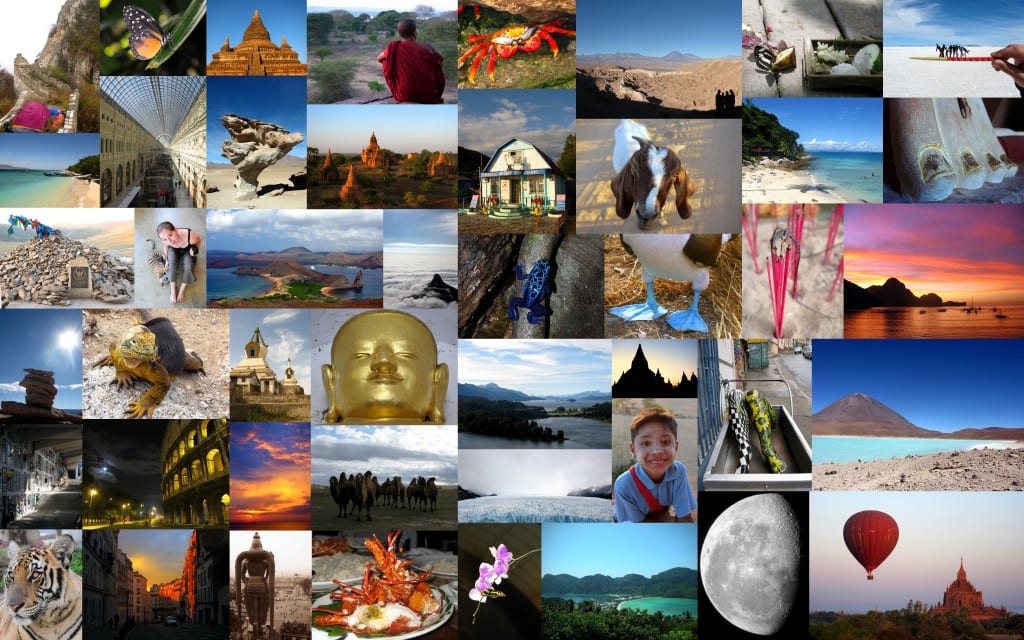 Three years of travel in one photo.

The cycle of these last four seasons has brought me back to Chiang Mai once more, and in the spirit of transparency, I thought I would answer some questions, set out some of my plans for Legal Nomads and write about what’s in store for me in 2011. There will be more travel, but also some interesting and — for me at least — fun updates for the site.

I started my new Thrillable Hours series after one lawyer joke too many, inspired in part by my friend Jeremy’s stint as a corporate lawyer working in Kabul – quite a change from the assumption that lawyers merely push paper all day long. As I’ve said in the past, I don’t fault people for wanting to stay in private law; there are many motivating factors like families and mortgages that I’ve never had to worry about. But for those people looking to make a change, there are many role models out there. Some have left their former careers entirely, while others remain within the ambit of law, be it in international practice or human rights or as teachers or students. And so, what started as a fun play on billable hours has turned into a really exciting project for me, and I’ve been thrilled (hee) with the response. I’m looking forward to posting more Thrillable Hours Q&As in the coming months.

As the site has grown, people have written to ask about monetization. As I’ve said before, I started Legal Nomads so that my mother, former colleagues and friends could keep track of what I was up to. Like a lot of travel blogs out there, I didn’t expect my site to be a source of income. It was meant to be a place to share the experiences, food and funsies from the road, and hopefully inspire people to try their own hand at independent travel.

With the exception of a few affiliate programmes (e.g. Amazon’s, where I get a percentage of purchases when they are made after clicking through to Amazon from my site from the large Resources Page for World Travel), the answer to the monetization question is no. I’ve turned down offers for sponsored posts, text links or advertising. Instead, I want Legal Nomads to be a springboard for other opportunities, a CV of sorts to documenting the stuff I did under the resumé line “traveled the world”.

Friends tell me I need to be better with the self-PR. I do tweet my posts when they come out and usually once or twice after that. However, I feel awkward asking people to promote my work for me. So as part of this round up (and in part to appease those who heckle), I’ve listed some of the press, interviews or articles about Legal Nomads that have appeared since my last travel anniversary of April 1, 2010.

– The Montreal Gazette recently named me their Lawyer of the Week and ran a long interview on their online site. This was exciting in part because I’m from Montreal and in part because my grandfather was able to open the paper and see my face on Page B2. And then he was able brag about it to his friends during bridge. And who doesn’t want their grandfather to brag about them during a bridge game?

– McGill Law School asked me to contribute a piece about how my legal education influences me today, which dovetailed nicely with my new Thrillable Hours series (I pose the same question to each of the participants). Uh, I did not send them the gargantuan header with the words “The Legal Nomad” scrawled in bright green, though I do appreciate their enthusiasm.

– Droit-Inc, a French language business and law site from Quebec, contacted me about excerpting parts of the McGill article and doing their own writeup about Legal Nomads.

– Longreads.com named me their first ever Featured Longreader recently. I’m very excited about Longreads (and similar sites like The Browser) because they emphasize the benefits of both curation and long form journalism on the web.

– I was featured in Austria’s Miss Magazine (self-described as “Austria’s Elle Magazine”) in an article about unconventional lifestyle choices and the benefits of balance. It’s in Austrian German but my German-speaking friends assure me I was not trashed in the article.

– I was voted one of Chris Elliot’s Top Travel Blogs of 2010, despite not being on the original nominee list.

– Chris Guillebeau interviewed me for his Art of Non-Conformity blog about saving up for world travel, solo female travel and motivation and has asked me to speak at his World Domination Summit in Portland, Oregon this June.

– Gadling featured me in a Q&A about my travels, obsessive love of street food and some tips for potential round-the-world travelers.

– And just today, my food recommendations for my hometown of Montreal went up at Jazz Hostels. (Poutine, FTW!)

…and thus concludes the “rah rah Jodi” portion of this post.

I’ve transitioned from travelling purely using savings from my years of lawyering to supporting my travels with freelance work and other projects. Though I have no big picture plan just yet, there are several areas that provide some exciting opportunities for 2011.

Understandably people often ask how I sustain myself on the road. I have lived off my savings the last few years, but upon my return to Thailand in January, I started working on a few freelance projects. One is my occasional contribution to CNN Travel, where I’ve written about Burma and Indonesia and travel burnout. The Hipmunk also hosted me for a three-part series on round-the-world travel, from packing to planning to how to stay positive on the road. I hope to work more with them in the coming months. They’re a fun company, run by the same (big) brains that created BreadPig and Reddit. I’ve also been working on the Northern Thailand chapter for a Thailand guidebook, which will ensure some travel to places I’ve yet to see in the area.

As with many things in my life (say, applying for law school) I joined Twitter on a bet. Specifically, the bet was that if I reached 2,999 followers without following people back merely because they followed me (but rather because they had something interesting to offer in their stream), my friend Allen would join Twitter too. Allen is long on Twitter, and as a source of great links I think we all benefit as a result.

Those of you who follow me on Twitter know that I don’t limit my tweets to travel-related links. This is because I use Twitter to share interesting stuffs that I hope people will enjoy, regardless of subject matter. Before I quit my job, I cobbled the news together in an email list called “Daily Linkies”. With a focus on technology and astronomy and quirky science articles, it was something that kept me entertained while on long conference calls. Twitter has essentially become a real-time version of Linkies, and though I’ve gotten a lot teasing about the astronomy links, my profile does warn than I’m a geek. And who doesn’t love a good nebula?

People have asked about curation and social media, so I have put together a resources page for that too, here.

Outside of the travel sphere, some really interesting legal opportunities have come my way quite recently. People often ask if I would return to the law, and my response has been the same: not at a private firm, but I would definitely consider lawyering in another capacity. The beauty of a law degree is that it allows you to straddle several worlds at once, and with technology allowing for work from afar, I’m not ruling out freelance work in the legal field.

A Big Thank You

A big thank you needs to go out to my terrific readers, who leave insightful comments, send me fun links that they think I would enjoy (*cough* enough with the links about birdcrap *cough*) and have really participated on the Fan Page I set up for Legal Nomads. I’ve even had a chance to meet up with some of my readers during my travels, which has been a real treat. So much of what makes this site fun has to do with you.

Here’s to Another Year of Legal Nomads!

On my 2nd travel anniversary (travelversary?) I wrote “All you really need to do to be a happy traveler is expect your journey to take a roundabout, winding path and then not get irate when it does; in the end, what you see en route informs who you will become as much as the actual destination.” The subsequent year of travel has taught me that the journey is not limited to physical destinations. The organic path that this blog has taken, the slow sprawl into curation and freelance writing – all of it has been a learning experience and has informed who I am as I move into my 4th year of wandering.

The most common question I get is “what’s next?” After years of knowing (“saving up to travel!”) 2011 feels very much like open space. I’m learning how to swallow the fear associated with the unknown and instead focus on the projects that excite me, on the foods that I so love to eat and on sharing these experiences on this blog. I closed my ‘Why I quit to travel” post with the affirmation that I felt lucky as ever to be living the life I wanted. I can say that I feel the same way still, only intensified by the additional memories I’ve experienced this past year.

Regardless of what 2011 actually holds, it has been one hell of a ride.