I left Thailand on February 28th, and met my baby brother in Manila for a few weeks of Ettenbergian fun in Bohol. I was, and remain, surprised at how different the Philippines is from Thailand and what else of Asia I have seen. That’s not to say I expected the same thing, just that on a base level, it is whole other universe here. I feel as though someone took a South American country and plopped it in the middle of the water on the Asian continent: the food, people and mannerisms well resemble Ecuador, not Thailand or China or Malaysia. When you consider the history of the country, its Latin feel makes a lot of sense.

Introduction to the Philippines

The Philippines consists of over 7,641 islands (up from 7,101!) nestled between the South China Sea to the East and the Philippine Sea to the West, including some 1500 that are too small to be named. From what I’ve experienced thus far, it is well beyond the backpacker trails of South East Asia – most days pass by without spotting another tourist at all. The landscape is somewhat overwhelming, even to a seasoned traveler: you can choose between limestone beaches (like those of Rai Leh in Thailand), lush jungles, swaying, vibrant coral reefs and deep, damp bat caves. 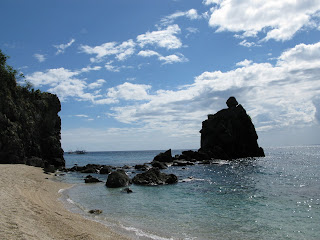 While archaeological digs have uncovered the existence of humans on Palawan from 50,000 BC, Ferdinand Magellan claimed the land for Spain in 1521, in blissful disregard for the people who had been living there for thousands of years and was eventually killed. King Phillip II established Manila as the capital of the Spanish East Indies in 1571, which lasted through the end of the 19th century, when Spain ceded the Philippines to the United States in 1899, at the end of the Spanish-American war. What followed was several more years of unhappy colonial rule (this time by the Americans), until 1935, when the country was converted into a Commonwealth. Unfortunately for them, this change in status did not last long: the country was occupied by the Japanese during WWII. Filipino troops allied with the Americans to defeat the Japanese in 1944, and the Philippines was granted full independence on July 4, 1946.

What surprised me about the Philippines

Given that the Philippines was colonized by Spain and the USA, but is located in the heart of the tropics, several things stand out as being quite a bit different from where I’ve just been.

For my love ode to the country, please see my post on the Top 10 Reasons I Love the Philippines

Other than a few towns that have cracked down on littering (Puerto Princessa, Hinoba An, etc) the streams and streets are cluttered with plastic and remnants of meals. People throw litter out the windows from buses and tricycles, without hesitation. I suspect it’s an education issue more than anything, as those I quietly asked about it said “Where else would I put it? We’re on a bus!”

2) For a tropical climate, there is far less fruit than I expected.

I’ve found are bananas and mangos, and the occasional mangosteen. Otherwise, slim pickings. Some apples, on a good day. I have, however, discovered that coconut and peanut together make a mean, mean fruit shake.

3) The food is not spicy, and it’s not as obsessively crafted as it is elsewhere in the region.

There are almost no vegetables, other than kangkong (swamp cabbage) and green cabbage, and meals are mainly meat and rice or meat and noodles and with many tasty varieties thereof. A saving grace: there are a ton of roast chicken or roast pork roadside stands, each of which are juicy and crunchy and delicious, and there is Halo-Halo (see below) everywhere. Food is otherwise filling and tasty, but not exciting. I dream of spicy green curry with coconut milk.

However, in Palawan – LOTS OF SEAFOOD. That lobster in the header: it’s from there. Om nom.

Coffee, tea, ube snacks, cakes, muffins – everything here has a ton of sugar added. No such thing as whole wheat bread either: you get white bread, with sugar baked in, dripping with sweetness. I’ve stuck to rice and eggs for breakfast, which happens to be delicious.

5) Halo-halo is the dessert of champions.

Halo-halo (pronounced hallo-hallo) is a mishmash of all things goopy and crunchy in a plastic bowl. Start with crushed ice, add milk, coconut pulp from a young coconut, fruit gelatin, sweet flan, a scoop of ube ice cream and top it off with corn flakes and voila! you’ve got halo-halo. The perfect mixture of anything you might crave on a hot, sticky day, it has proved a great way to duck in and get some air conditioning and ice cream in the middle of the afternoon.

6) Asking someone for directions is not straightforward.

Most tourists here say you need to ask three separate people, then go with the majority. You are, however, at risk for the Noncommittal Head Nod (see below) when asking.

This is a likely response to anything you ask. It is a half nod with a refusal to make prolonged eye contact. It either says “I have no idea what you are saying, little girl” or “I will not make this easy for you” or “I don’t want to break it to you that you are totally going in the wrong direction.” (Note: it’s a side project from the “It’s ok” refrain that I tackled in my “Why I Love the Philippines” post ;)

At 3pm in the bigger cities, the stores stop playing radio pop and instead a prayer comes on the loudspeaker thanking God for life, meals, etc. Everyone stops and listens and then crosses themselves and looks up at the sky (presumably, at God) at the end. I first discovered this because I walked into the supermarket and started shopping, only to look around slowly, in panic, when I realized no one else was moving. For a spit second I actually thought time and space had hiccuped, but no – it was God.

9) Women here do not ride motorbikes very much, unlike elsewhere in Asia.

Thus, when I rented my own bike it felt as though I was in a parade. People were screaming and jumping and waving and yelling “HELLO FRIEND!” as I rode by. Good for the ego, bad for womankind.

When you meet a new Filipino, the following three questions are asked, almost immediately and in the exact order I’ve written:
– Do you have a husband? or Are you only one?
– How old are you?
– Where are you from?
– Why are you alone? Where is your husband? Why don’t you have one? WHY ARE YOU ALONE?

I’ve been told by several Filipinos they cannot even imagine traveling to an unknown country without a guide or group, and it appears that people are genuinely concerned that I am alone and/or that I have not yet managed to land a husband.

Case in point: I sat on White Island off of Camiguin whilst Cale went scuba diving and the next thing I knew I had 20 kids all about 3 inches from my face, yelling “Hello friend!! Why are you here? Where is your husband? Where are you from?”. 12) While they have minivans and tricycles here, they also have jeepneys.

A jeepney is a jeep-van hybrid, gaudily decorated and packed full of people. And I mean PACKED: even when you think the jeepney can’t fit anymore people, it can and will and does. The record: 34 people in the jeepney with 5 more on top and several others hanging off the back. This does not include the chickens on the roof, either. Normal capacity for said jeepney? 12 people.

13) Cockfighting not only legal, but a source of national pride.

Riding into towns you see “Derby” schedules posted outside the city limits (with rooster names like “Ringo” and “Elmo” and “Karl”, listed in order of fighting). Riding on public buses you will see tons of mini teepees in the grass you are passing by, and under each teepee an irate rooster. Thus: roosters crow almost every minute of every day, and are brought in little cardboard boxes with handles and holes on every mode of public transportation, from buses to jeepneys (see above) to boats. 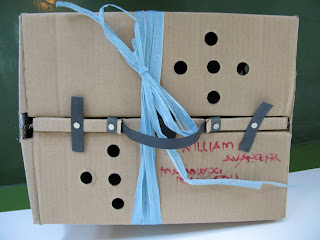 14) Pinoys are obsessed with their cell phones.

There is cell coverage throughout the islands, and most hotels or hostels request that you text them to make a reservation, going so far as to complain that you didn’t text when you actually call them. Most bus rides are punctuated with the beeps and rings and sounds of text message notifications, and people walk down the street either texting someone or listening to their phones. When a fellow traveler noted that they never bothered to get a Filipino SIM card, our hostel owner was aghast, wanting to know how one could get by without a mobile phone to be a guide.

Note that these are merely from my month down in the Visayas and north of here – like the mountains surrounding Banaue and Sagada – might differ entirely. thought it might be interesting to type these out quickly and share, since the contrast of this country to some of others is fascinating. Thus far, I’ve really enjoyed being here and the friendliness and open smiles of the people I have met. This country is known for its helpful, kind and inviting locals, and the reputation seems well-deserved. It is fun being a one-woman show traipsing through buses and ferries and towns, where children pull their parents out of stores to point at you and yell an enthusiastic hello. And I am really looking forward to exploring the rest of the geography of this place; the mountains, beaches and landscapes have so far been some of the nicest I have ever seen.

I’m off to Palawan now, but will update on the Visayas soon!
-Jodi