Why I Love my Burmese Longyi

I left my laptop in Thailand when I went to Burma. I was told that WiFi would be almost nonexistent, and without cell phone service I relished the idea of returning to my Moleskine instead of a keyboard. Looking at my notebook months later, my enthusiasm is palpable. On day two: “Burma is one of those miraculous, seemingly utopic places where you are free to assume the best in the local people you meet. Juxtaposing this friendliness on the truth about what’s happening inside military-ruled Burma is surreal; you see what you are allowed to see, and no more. But what you experience is real, and in my brief time thus far in Burma, magical.” The friendliness and generosity of the Burmese were primary reasons that other travelers urged me to visit. On that second day, I decided to find myself a Burmese longyi, and it quickly turned out to be the best ice breaker I could ask for.

The longyi is everywhere in Burma. 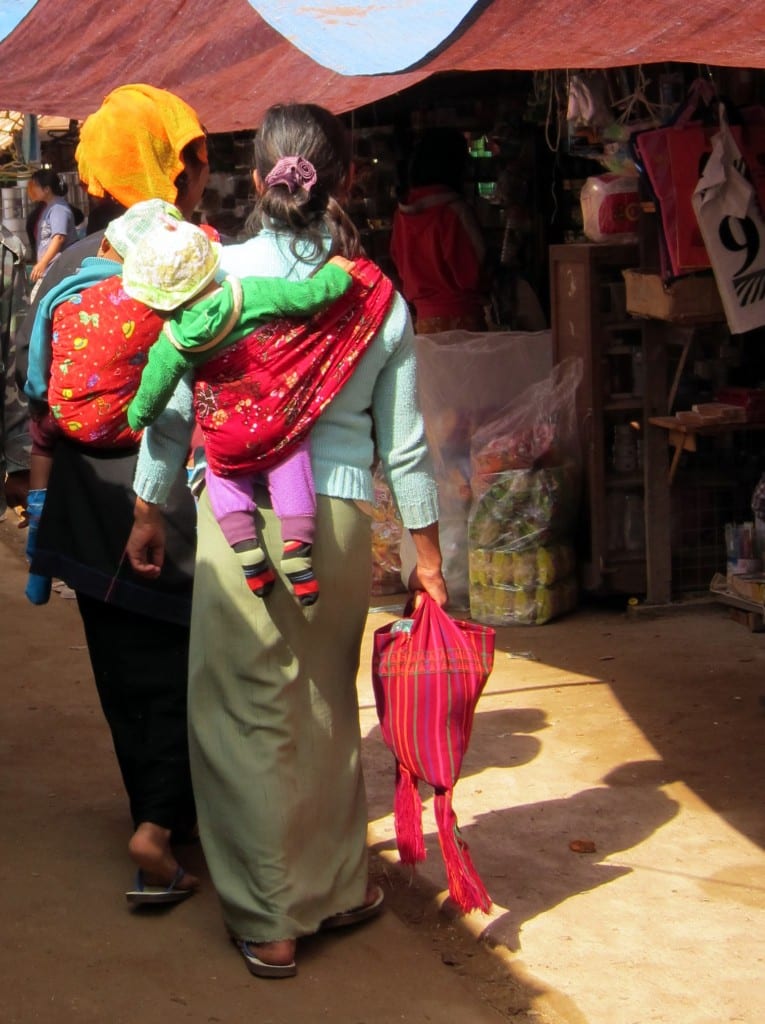 A sarong-like tube of fabric worn by both genders, they are called paso when worn by men and htamein by women. Throughout my time in the country everyone merely referred to the gender-neutral term “longyi”. The patterns differ by gender as well: for men, a thin plaid or woven stripe, tied by pulling the fabric tight against the back and tying an elegant knot in front. For women, anything goes: beautiful, bright batik patterns, traditional woven zigazags called acheiq, stripes or flowers. Women tie the longyi by pulling all of the fabric to one side, folding back at the hip and tucking into the opposite side of the waist, usually topped with a fitted blouse worn just to the waistband. The women also sew in a thin band of black fabric at the waist of the longyi. I was told this was “for the sweat”, but I found it handy to figure out which side was up. 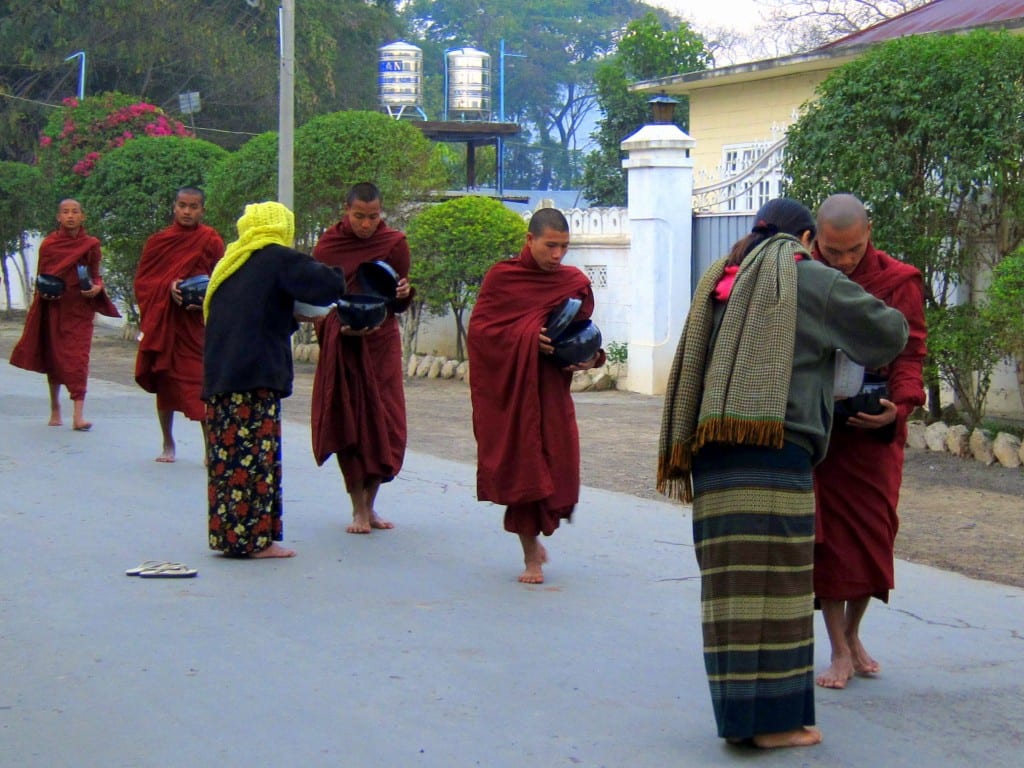 My host giving alms to the monks in a traditional Shan longyi on Inle Lake.

I decided to get a longyi when I realized how prevalent they were; almost everyone wears the long traditional skirt and as a solo traveler I thought it would help blend in. Stepping out of my hostel on my 2nd day, I took out a map to figure out where the market was. Within seconds, shadows cast over the map and I looked up in surprise to find 5 women standing there with beaming smiles. “How can I help you?” one of them asked. I explained I wanted to find myself a longyi, and the next thing I knew I was holding hands with two of the women and on my way to the fabric store. Parading me around the store with bolts of fabric on my shoulders, each had a differing opinion about what colours suited me best. I ended up choosing an Indonesian batik in a thin fabric, with deep purples that matched the 2 tops I had in my possession.

One of the women in the group turned out to be a tailor and shooed the rest of the ladies away as she took my hand and led me to her apartment. Set in the back streets of Yangon, her building was subsidized by the government and in terrible shape. “My walls are falling down” she said as she led me up 8 winding floors on a crumbling staircase, “but the government doesn’t care.” 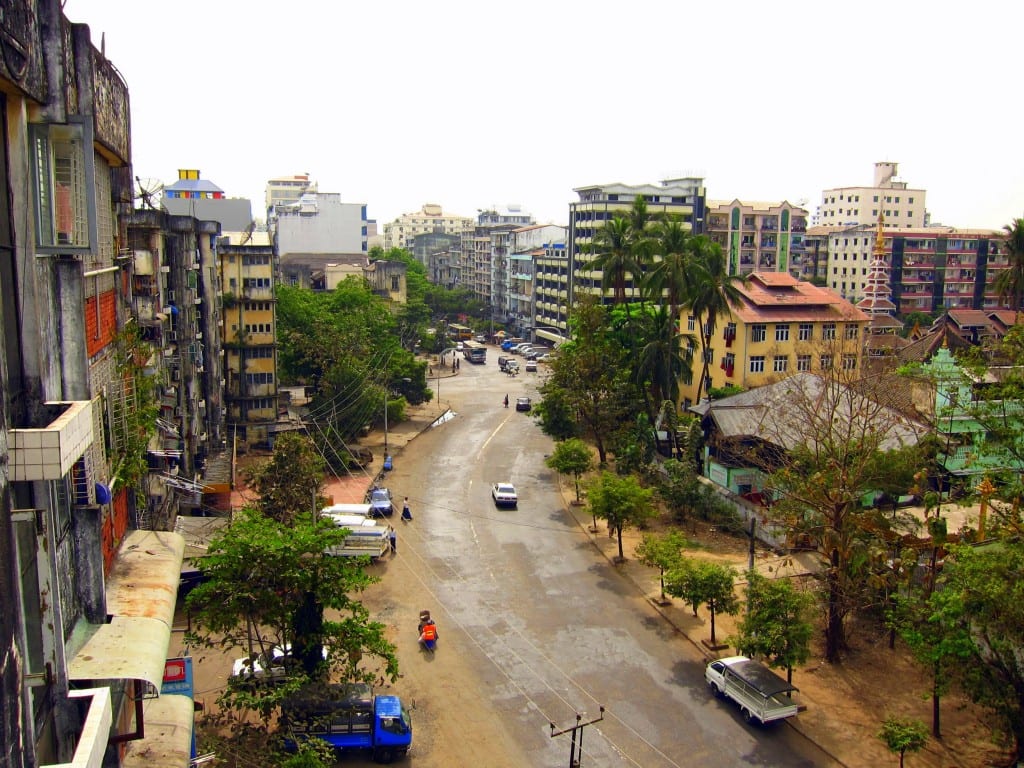 View of Yangon from the roof of her apartment.

Inside the apartment, her belongings were scattered on display shelves, separating the bed from the rest of her tiny studio. She quickly sewed the long rectangle of fabric into a longyi, added the black band and made me a delicious dinner. Though she steadfastly refused payment, I snuck Kyat under her sewing machine and promised to meet her daughter the next day to practice English. 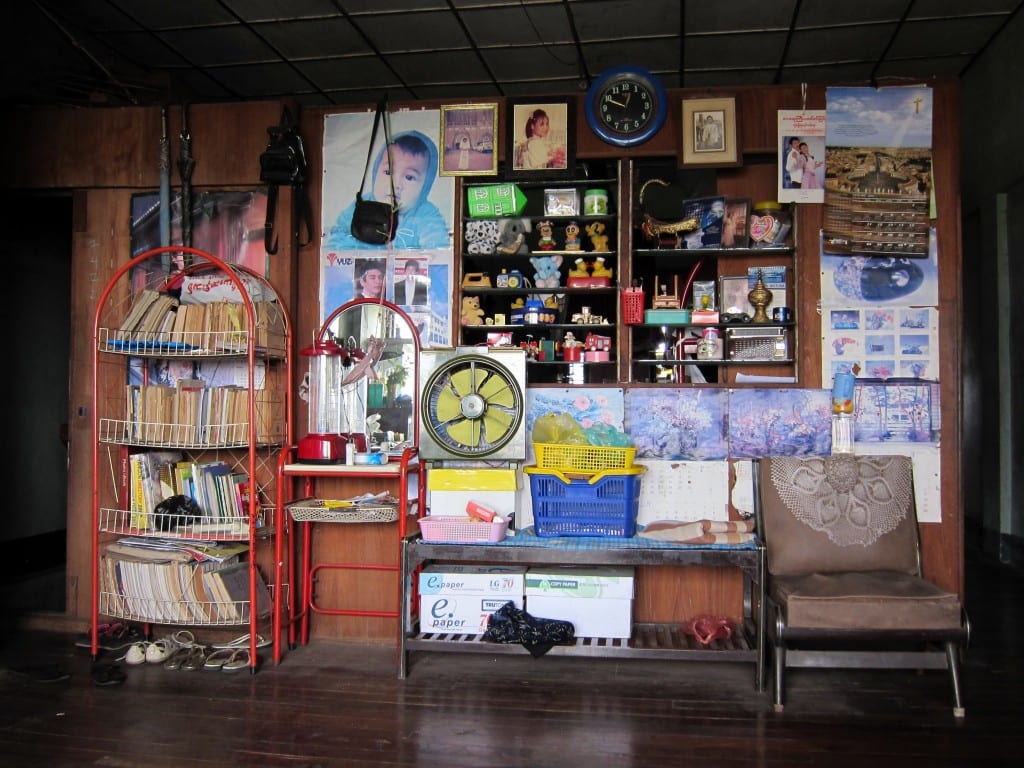 Inside her tiny apartment, a shelf of possessions for the family of 8. 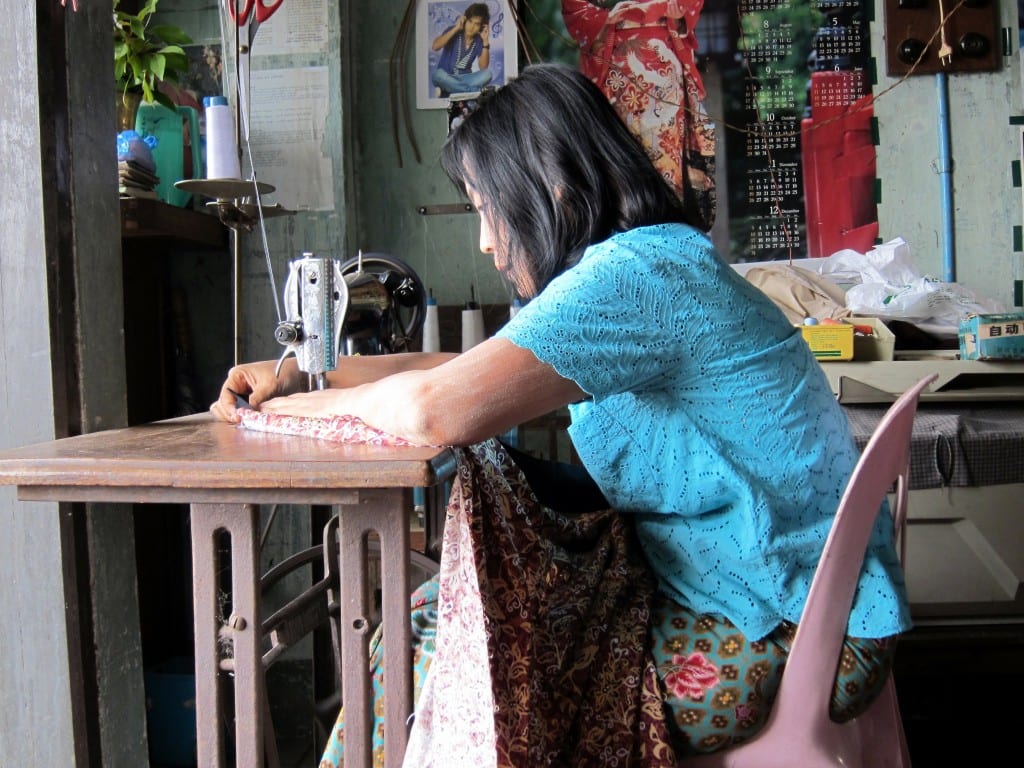 Making my longyi in the afternoon light.

Back on the streets of Yangon, I realized I had a small problem: she thought I was far taller than I really am. I was forced to wrap the longyi just below my bust to avoid tripping on it, which meant that it kept untucking itself as I moved. When I went to Mandalay the next day, my first order of business was to get the longyi shortened. This turned out to be slightly more difficult than anticipated: I did not know the Burmese word for tailor, and hadn’t remembered to ask my guesthouse before I left. Wandering up 82nd street, I tried to mime what I wanted to the people I met. “You know….brrrrrrrrrrr?” I’d say, imitating the sound of the machine while pumping my foot and air-sewing for good measure. Blank looks, until one wizened old man grinned toothlessly and grabbed my hand to drag me across the street to a tailor. 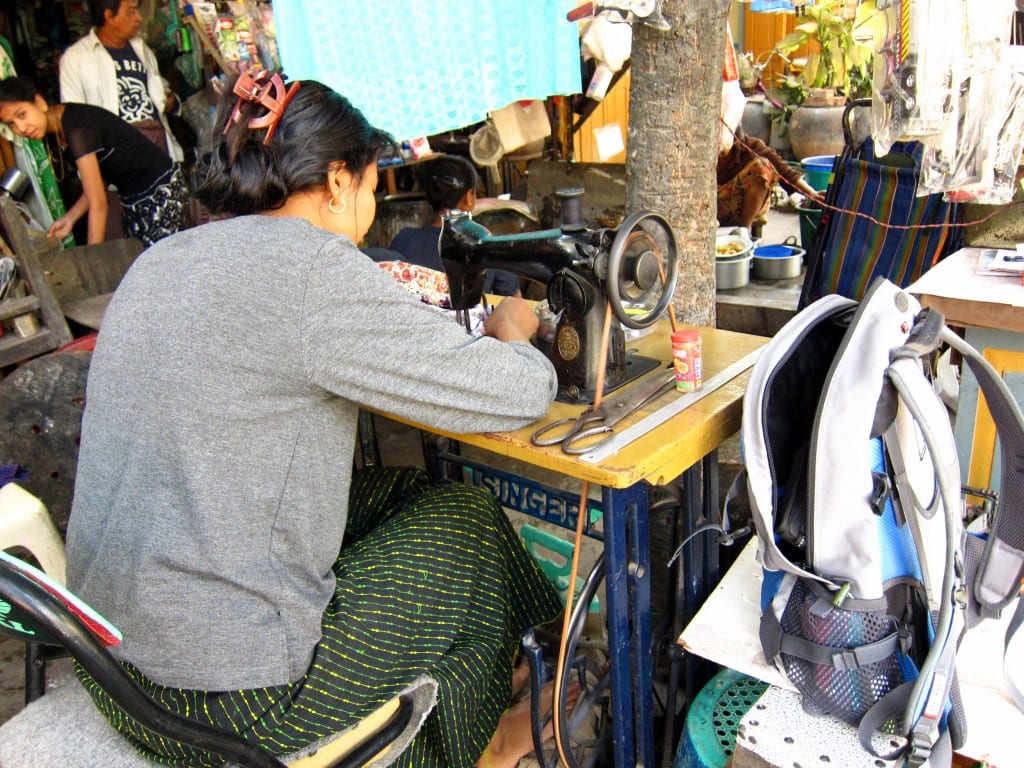 Sewing up the hem of my longyi in Mandalay.

Now that it fit, the longyi turned out to be an excellent purchase. Wearing it on the streets of Mandalay, people would smile and point at the skirt as I walked by. In Hpa-An, my tiny guesthouse had a public bathroom and I wore the longyi like the Burmese do to shower: wrapped around my whole torso, tucked just under my armpit. Walking to the shower one afternoon the owner saw me. “Just like a Burmese girl” he exclaimed happily “even to shower!”. Ah yes, the joys of public bathing just got easier.

In the Kachin state, the longyi proved a perfect buy once again. With tens of thousands of Kachin from around the world, days of music, dancing, costumes and rice wine, the Kachin State Fair was an overwhelming welcome to Myitkyina. Wearing my longyi one afternoon, I suddently felt someone undo it from the side. Whipping around, I found a group of Kachin women dressed in traditional costumes giggling hysterically – apparently I had tied it on the wrong side of my torso and they found that hilarious. Cut to a series of group shots, them doing my makeup in the middle of a dirt road and some mohinga for good measure and it made for an incredible afternoon. 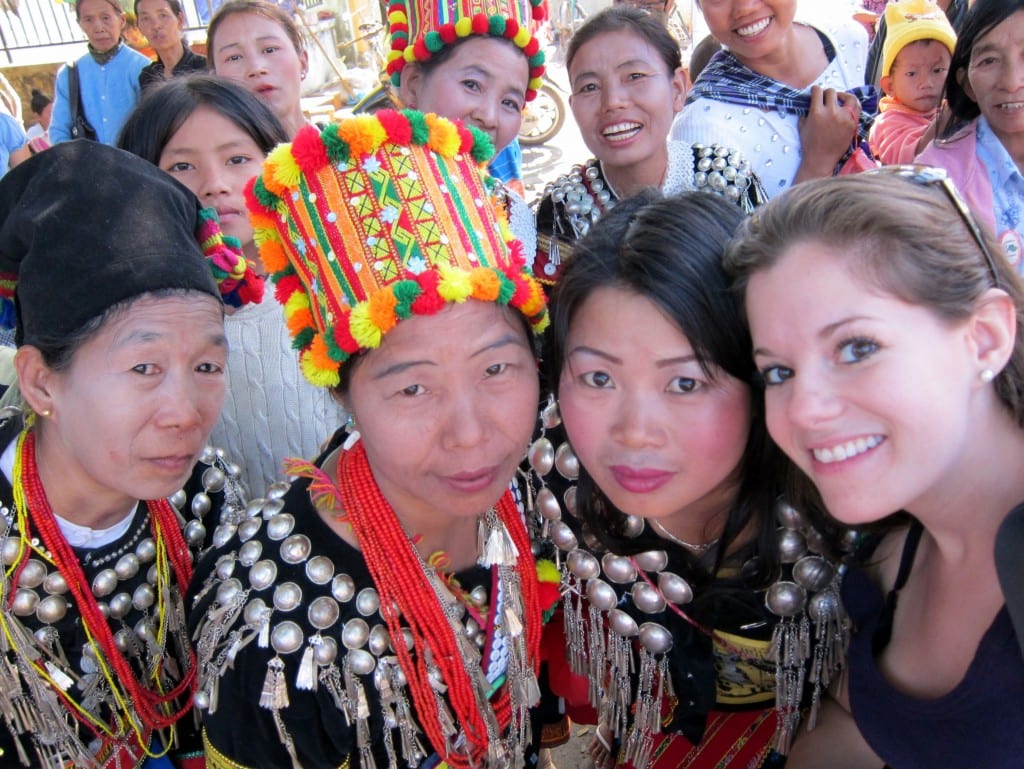 Self-portrait: Me and Kachin tribeswomen at the Kachin State Fair.

In Inle Lake, I wore the longyi when I visited the local markets at dawn. The Pa-O tribeswomen who had descended from the Shan foothills to buy their food for the week would gawk at it, many coming up to touch the fabric or stare at me unabashedly. A few complimented me on my Burmese-style, others would merely point from afar, but it proved to be both an excellent ice-breaker and a way to take pictures without seeming too obtrusive. 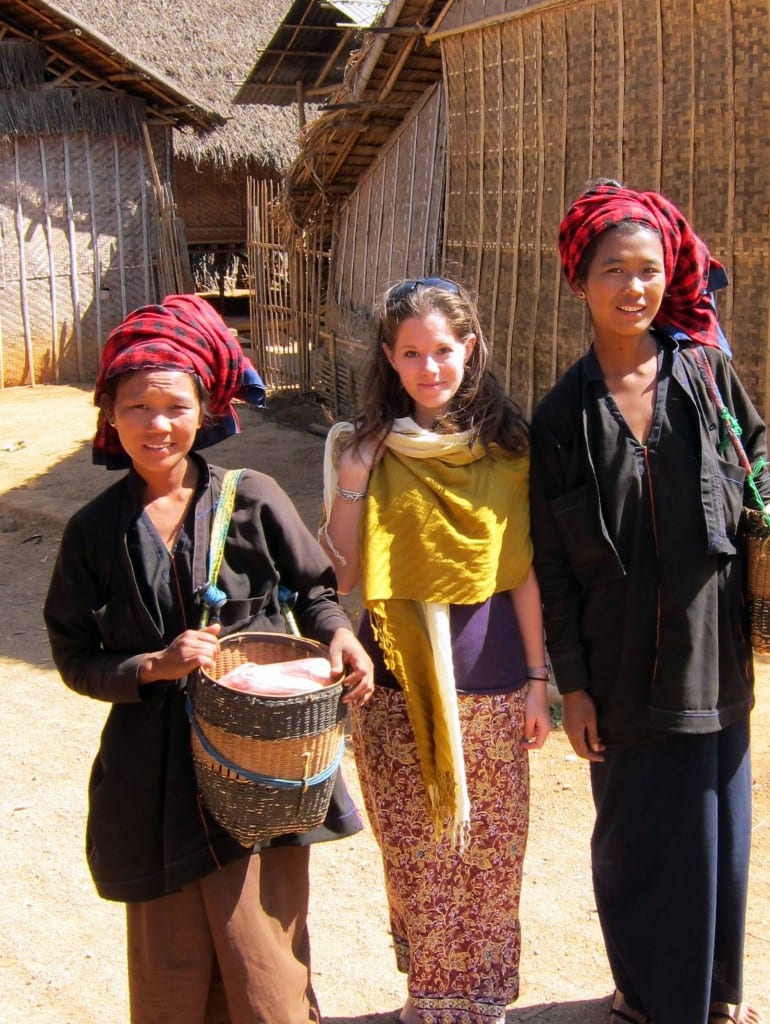 Me and my longyi with two beautiful Pa-O tribeswomen on Inle Lake.

On Inle, I also learned that the “whoops my longyi fell off” worry is an extremely valid one to have. While exiting a tiny boat, my longyi got caught in a protruding nail, and let’s just say my boat driver and the boat of passing Pa-O now know what a white woman’s behind looks like (clad in underwear, of course) because that longyi fell to the ground faster than I ever thought possible. Two words, ladies: safety pin. 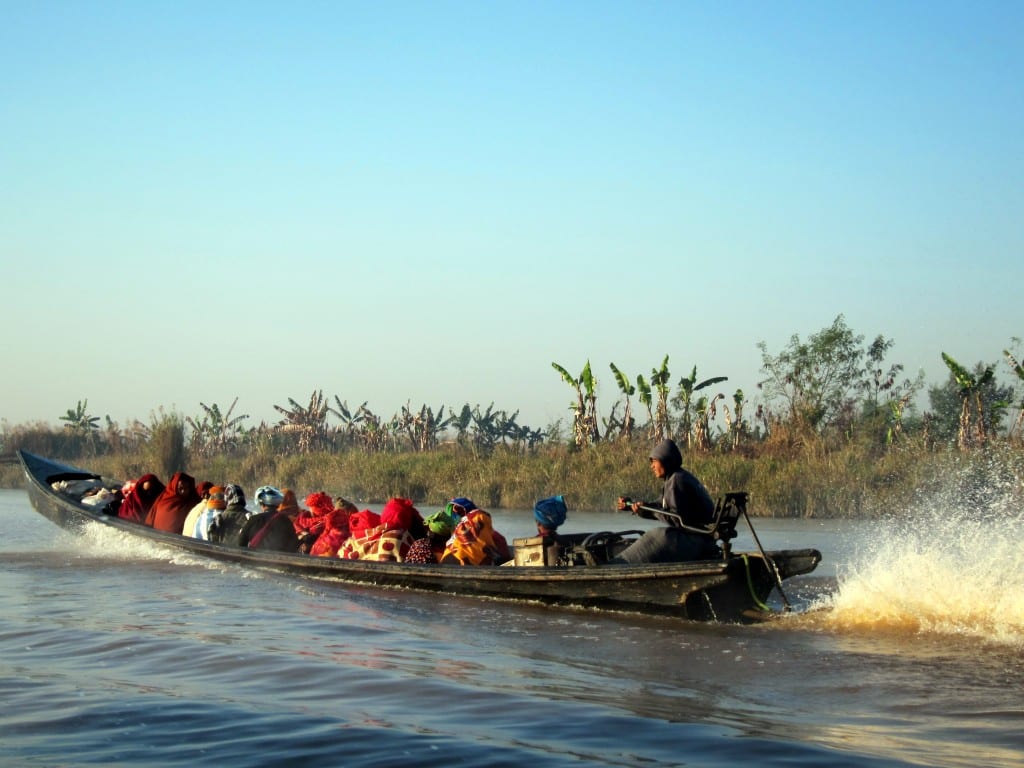 This boat is speeding away because they are blinded by the phosphorous whiteness of my behind.

My trip ended in the Mon State, south of Yangon. While in the tiny town of Hpa-An, I went to a dusty shop next to the village’s central market. There, I found the most beautiful longyi I had seen, a wondrous blend of colours and stripes, woven together on a thicker cotton base. The woman in the store would not sell it to me. “Not Burmese,” she stated, pointing at my face. And then, gesturing dismissively at the one piece of clothing that got me into so many homes in Burma, “you cannot wear traditional longyi. Not selling to you.”

I tried again several days later, hoping for a different woman in the shop, but the second she saw my face she set her jaw and shook her head. On my last day in Yangon I went back to Boyoke Aung San market to buy a longyi for a friend, and somehow in the dizzying maze of dark hallways and wooden stalls, I found my longyi. I was so excited that I gave the woman running the shop a big hug. In turn, she was so happy to see me happy that she had me sit with her for the afternoon, helping her sell to tourists. A big group of French travelers came by and I was able to translate for them, thereby earning me another big hug. 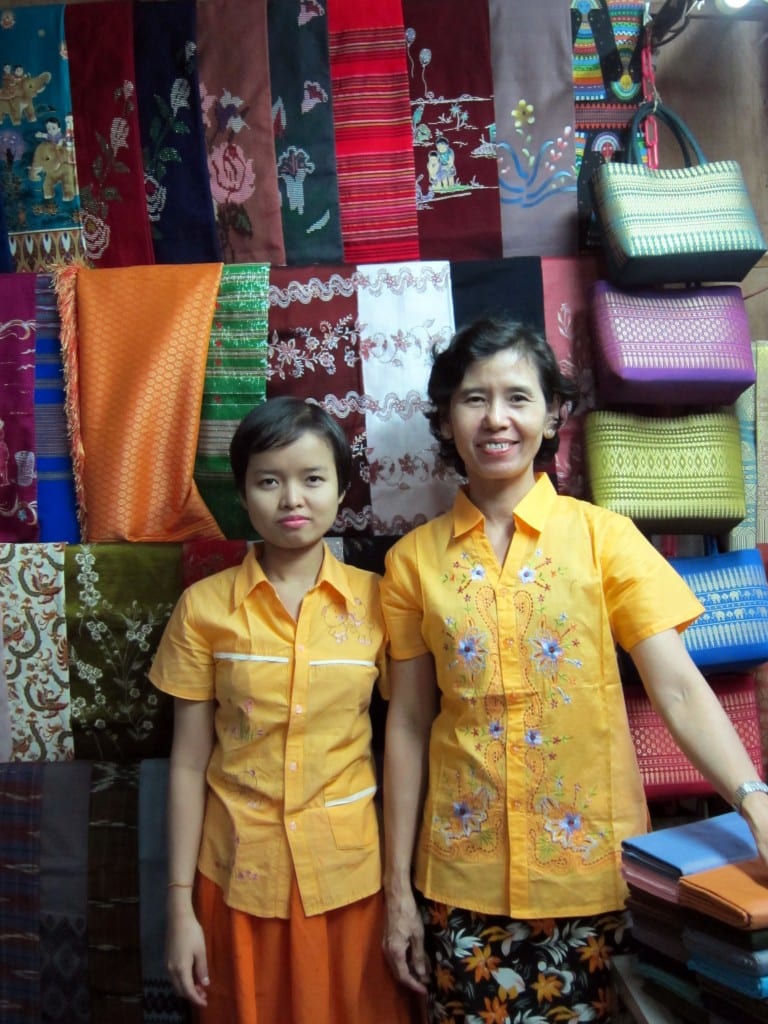 Me at a stall in Boyoke Aung San, with the huggable sales lady and her daughter.

It was the perfect way to leave Burma and yet another example of warmth from her people. I met several men and women who also bought longyis when they arrived in the country, and all of us had an easier time of meeting, interacting and befriending locals. It was the best thing I could have done upon arrival and I’d urge anyone planning a visit to the same when you get there. 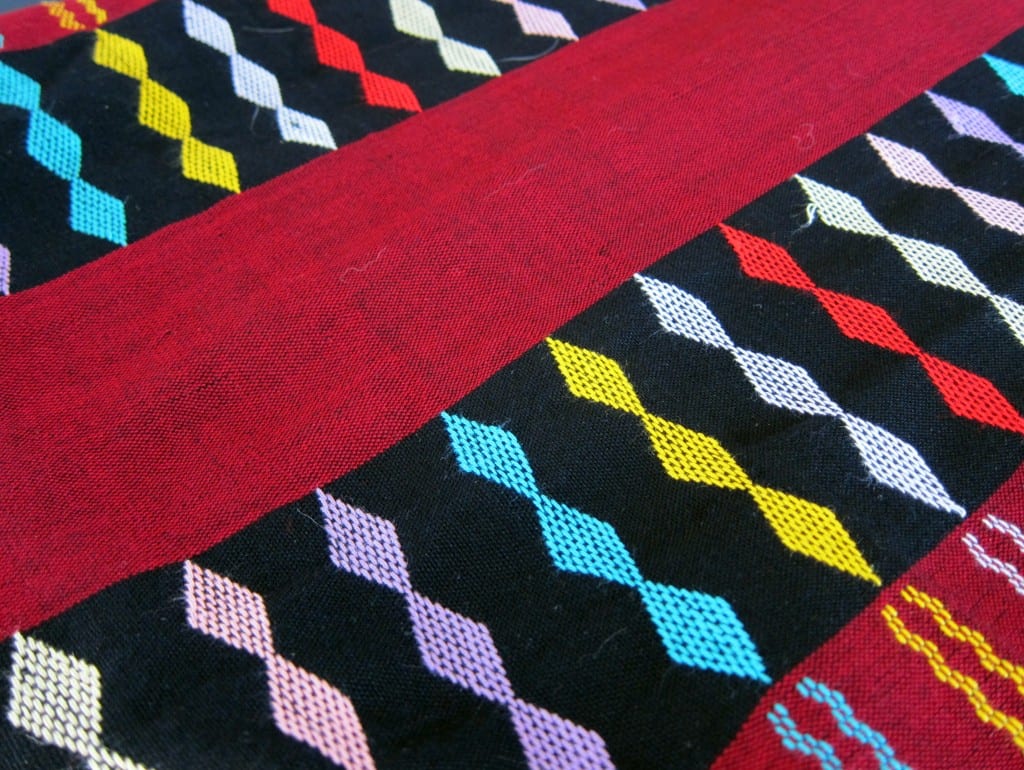 My final purchase: this beautiful longyi.

26 thoughts on “Why I Love my Burmese Longyi”