Adventures in Indonesia: Lombok to Flores by Boat

Some trips start out with the sudden realization that something is just not right. My 4-night slow boat trip from Lombok to Flores by boat — Gili Trawangan, Indonesia to Flores, to be precise — was one of those trips. It began with my minibus driver’s drunken babbling, and progressed from there. Since I did arrive in one piece, the sinking feeling in my stomach has been replaced by relieved retrospection – and, of course, now makes for a good story. Most transportation misadventures do, provided you survive.

To get to Flores, you need to pass through the poorest islands of Nusa Tenggera, each with a very different feel. First, to the rugged, dry, seemingly untouched island of Lombok. Next, to the volatile, volcanic Sumbawa, one of the poorest places in Indonesia whose claim to fame lies under the surface: the 1815 eruption of Gunung Tambora is one of the most destructive volcanic eruptions in modern history, and the ash that it propelled into the atmosphere led the locals to refer to 1816 as the Year without Summer. From Sumbawa, we soldiered on to Komodo, home of the world-renowned Komodo dragons, essentially the world’s largest and fiercest monitor lizard, and then to Rinca and Kelor before anchoring in Labuan Bajo, the capital of the Flores. Flores, home to the famous Kelimutu lakes (each separated by a volcano’s crater and varying in green, blue and red colours) is both difficult to reach and achingly beautiful.

But back to my trip.

Boat trip from Lombok to Flores

It began with me wedged into the front of a minivan, between a manic driver with bloodshot eyes and an angry guide. The driver would alternate between giggling uncontrollably and braking randomly, making us all nauseous (and scared). He had a bottle of Bintang beer in his lap and a serious inability to stay in his lane. There were 16 of us in a minivan that was clearly meant to hold a lot less, which turned out to be a stubborn theme of the night-boat experience. Our driver swerved his way through Lombok, driving past crumbling mosques and clumps of cows and goats, and summarily deposited us in the harbor, mostly unscathed.

If the minibus was an indication of safety, I was pretty worried about the state of the boat. It turns out that my instincts were right: though the boat had a 12-person capacity, we were 16 tourists plus staff – and 4 live chickens. There were no chairs or tables to sit in on deck, and though we were assured that there would be mattresses and sleeping bags, we were provided with worn sheets and a yoga mat. The sleeping space (what we all began to refer to as “The 5-Star Floating Loft”) was too small for all of us, and thus several of the group were forced to sleep huddled together on the deck below, exposed to the howling wind as we chugged on through the night to our next destination. To make matters worse, there was no lifeboat – just a “rescue canoe” strapped awkwardly to the front of the boat, and no life jackets to speak of. 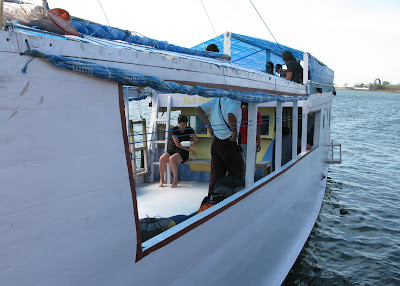 Our boat, in all its glory. Note all of the people wedged into the loft! 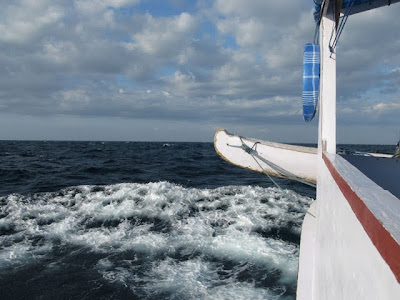 In case you were wondering, the Lombok to Flores boat experience turned out to be an interesting one. Broken down into list-form, highlights include the following insanity:

– Less than 10 minutes into our trip, the captain fell asleep at the wheel.

– I woke up with a start in the middle of the first night because the boat was pitched violently to the left: we were heading through the notoriously rocky Sumbawa Straight, an open stretch of water known for its wind and whitecaps. We were all soaked, even atop the loft. In the morning, our guide asked us to all give thanks that we “made it through the straight alive.” Great.

– The next morning we all awoke at 5am because our captain had fallen asleep and driven the boat into a huge fishing net of a nearby village. The villagers were enraged, we were confused and the captain had to spend an hour under the boat cutting us free.

– With no chairs or tables, we took our meals sitting souk-style on the floor, which was great when the boat was not throwing us around in the waves.

– At the end of the first night, we all took turns singing our national anthems, to our guide’s delight. Represented in our little group were England, China, France, Italy, Switzerland (German side), Switzerland (French side), Belgium and Canada. I sang a rousing version of Oh Canada. My 5th grade teacher would be proud.

– At night, a trail of phosphorous algae hovered glowingly alongside the boat as it moved. We sat for hours staring into the water, mesmerized by the luminous path.

– A huge, hairy spider tickled across my toes and, not happy with me ignoring it (I thought it was one of the chickens), it scurried up the beam to stare at me in the eyes. I’m a serious arachnophobe. And the spider had 4 eyes. I did not take this very well. 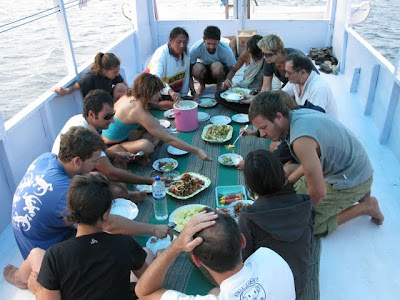 Enjoying our meal on the floor.

While the transportation was not the safest, the scenery alongside the boat was stunning. We got off each day to hike or snorkel or traipse through some of the smaller islands on the Sumbawa straight. Moving into the Flores sea, we hiked to the top of Gili Laba to view a breathtaking panorama of Komodo, Flores and Rinca stretching to the east, and Sumbawa to the west. The view reminded me of Bartholomé in the Galapagos, with the same dry, curving land and turquoise waters wedged between. And from the lush forests of Lombok to the parched land near Rinca and Komodo, the trip provided many picture-taking moments, including the awe-inspiring Komodo dragons. 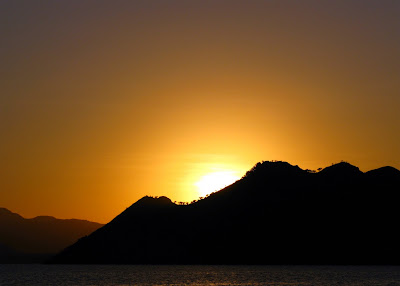 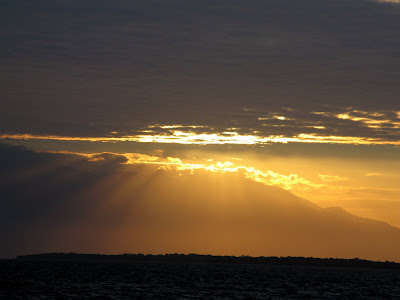 The Dragons (varanus komodoensis) were the main reason most of us took the trip. The world’s largest lizard, and they weigh in at 90kg when fully grown. That weight is distributed on a 3m long skeleton, and coming face-to-face with one of these angry reptiles is fairly scary. As the Komodo’s physical presence was not sufficiently off-putting, the lizard is both enthusiastically carnivorous and venomous. For years, scientists believed that the lizard was not poisonous, but rather that its saliva contained a myriad of bacteria, such that a bite would get infected and – fairly quickly – lead to death. However, mere months before I saw them in person, new findings emerged demonstrating that the saliva was, in fact, mildly venomous. Death comes quickly because the Komodo has such powerful jaws that it can effectively puncture through to bone and deposit its poisonous saliva where it can do the most damage.

We were able to hike alongside the dragons in both Komodo and the beautiful Rinca, both part of the UNESCO heritage site of Komodo National Park. The park is known for the staggering diversity of its marine life: it boasts more than 1000 species of fish, 385 species of reef-building corals, 70 species of sponges, 10 dolphin and 6 whale species and sea turtles, sharks and several species of huge manta rays. Those of you who scubadive: this is your place. 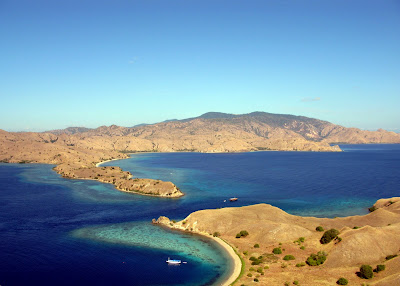 All told, the trip was worth it, despite the many moments of fearing for my life. An extra bonus: Showers on the Gilis are all saltwater (in affordable hotels, that is) and there were no showers on the boat. By the time the boat trip was over, it had been 3 weeks without a freshwater shower. To make matters more fun, I proceeded to take an adventurous 30-hour trip through the bowels of Indonesian public transportation to get me back to Lombok, without showering first. Consider this post a public apology to anyone who had to sit next to me!

7 rolls of toilet paper
4 chickens, 1 giant squid & 5 small fish (for dinner)
32 bottles of Bintang beer (to numb us to the safety risks)
72 hours of not-so-smooth sailing
2 salty showers in the Sape and Flores seas
1 wrong turn
0 people eaten by a Komodo dragon.