My dad loves cars. Building them, washing them, driving them – you name it, and he can tell you about it. Many childhood weekends were spent learning from him, about shiny chrome and bright paint, about looking far into the horizon when on the road (never right in front of you) and about sipes. Lots of comments about sipes. He first taught me to drive when I was barely in my teens, in the countryside where we had a weekend cottage. Straining to reach the pedals, I stalled the car almost immediately. At 12, driving was a struggle and an art it seemed I’d never master.

Of course, comfort came with time — and a few extra inches of height. What first seemed to be an impossibility became a necessity and then a deep abiding pleasure, something I looked forward to as a treat above many others. There is happiness, for me, in looping around hairpin curves and testing out the camber of a road, of downshifting at a perfect, precise moment and accelerating at the apex of a turn. It’s thus no surprise that I loved driving in Morocco, a country where customary road rules are vaguely optional and the entire country becomes a themepark for a loose game of chicken. 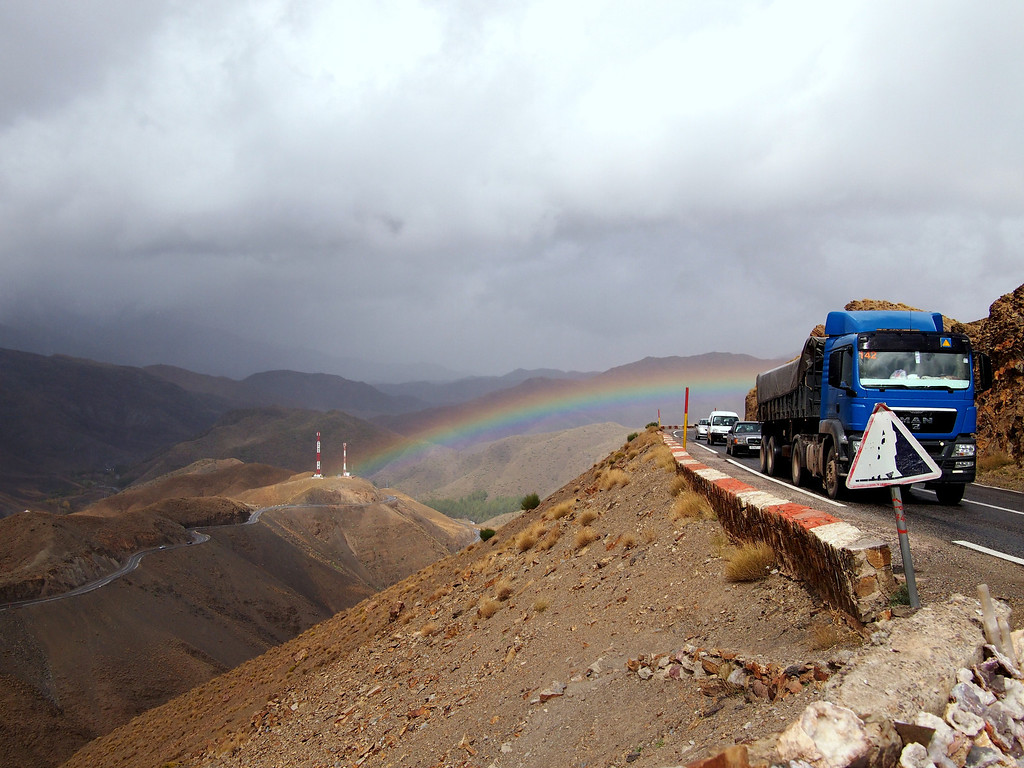 Trucks, cars and winding turns on the drive through the High Atlas mountains

After my 2-weeks in the country with G Adventures, my friend Damien from Ireland met me to explore some of the places the trip did not. We decided to stay in Marrakesh for a few days and then head down to the desert. Based on the timetables of buses and our limited days left in the country, we thought renting a car would be the best option. Having watched the driving for a few weeks already, I was itching to get behind the wheel and Damien was kind enough to let me do all the driving.

It was a five-hour drive from Marrakesh to Ourzazate over Morocco’s highest mountain pass, the Col du Tichka, and then descending toward the Sahara. From Ourzazate, it was another five hours past Zagora to M’hamid, most of it on a one-lane “highway” called N9, where I would watch the cars and trucks barrelling toward me, sticking it out to see who would flinch and move out of the way first.

Throughout, grand taxis, shared cabs from city to city, would weave crazily between the lanes and over on the shoulders. 6 people crammed inside (plus driver!), they would turn to me when I passed them or they passed me, a look of total shock on their faces to see a tourist (female, too!) behind the wheel, driving like they do.

It was a glorious trip.

On the way to Ourzazate, the weather was horrible. Pelting rain, lots of 18-wheeler traffic and buses swinging their way around the tight mountain turns, me fighting to keep the car on the road against the push of the howling wind. Those of you who saw my Facebook photo know that I was rewarded at the top with a stunning double rainbow, bright colours contrasting against the wet sandy rock. The remnants of the rainbow are in the photo above but at its peak it was incredible. The drive onward from Ourzazate and subsequent return – nine hours straight from M’hamid back to Marrakesh – was in perfect weather. Bright sun and unnervingly blue skies, little wind and of course a big smile from me as I wound my way back up and through the High Atlas mountains.

My Best Guesses at the Rules for Driving in Morocco

Passing can be signaled in a variety of ways.

1) If you want to pass a car, honk your horn as you begin to pass the car in front of you, and then honk again as you pass, and a third time as you hop back into your lane.

2) If you are being passed, there’s a good chance the person behind you is tailgating and/or cannot see in front of your car anyhow because there’s a blind curve up ahead. Once you notice another car coughing on your exhaust, use your signals to help them figure out when to pass. A left signal would indicate that they cannot pass and in fact if they did try and pass they would meet a car or truck head on fairly quickly. A right signal indicates that there is no one in the general vicinity (and by “general vicinity” I mean 5 seconds of passing time) and now’s your chance to make a move. Sticking your hand out the window and moving it front and back, as if to say holy crap, person tailgating me, why don’t you PASS ME ALREADY also works.

Honking in the Morocco is as ubiquitous as seeing a donkey on the side of the road, laden with fresh mint. It can mean a wide range of things. Here’s my attempt to list some of them out.

1) I am going to pass you right now, I am in the course of passing you, I have passed you, thanks.

2) I suspect the light is about to go green and you haven’t already been revving your engine in preparation, ergo you are going to waste my time with 2 seconds of slow driving and ought to move your ass into gear.

3) We are driving straight at each other in a tense game of chicken and I am honking to let you know that you, rental car with a tiny girl inside, will be moving first. Not me.

5) HOLY CRAP THERE IS A WOMAN DRIVING AND A MAN IN THE PASSANGER SEAT! I’m going to honk uncontrollably and point and laugh and then almost drive off the road in a fit of mirth.

6) The non-honk: whatever you do, do not honk as you are approaching a blind curve because that will in some way help the person coming the other way, as that’s not the point of driving in Morocco.

Lines in the middle of the road:

Do not pay attention to them. They are just for fancy and do not exist to actually indicate when you ought to pass or stay in your own lane. This is because “staying in your own lane” is a concept not remotely entertained in Morocco and you can do whatever you want, so long as there’s no police nearby. 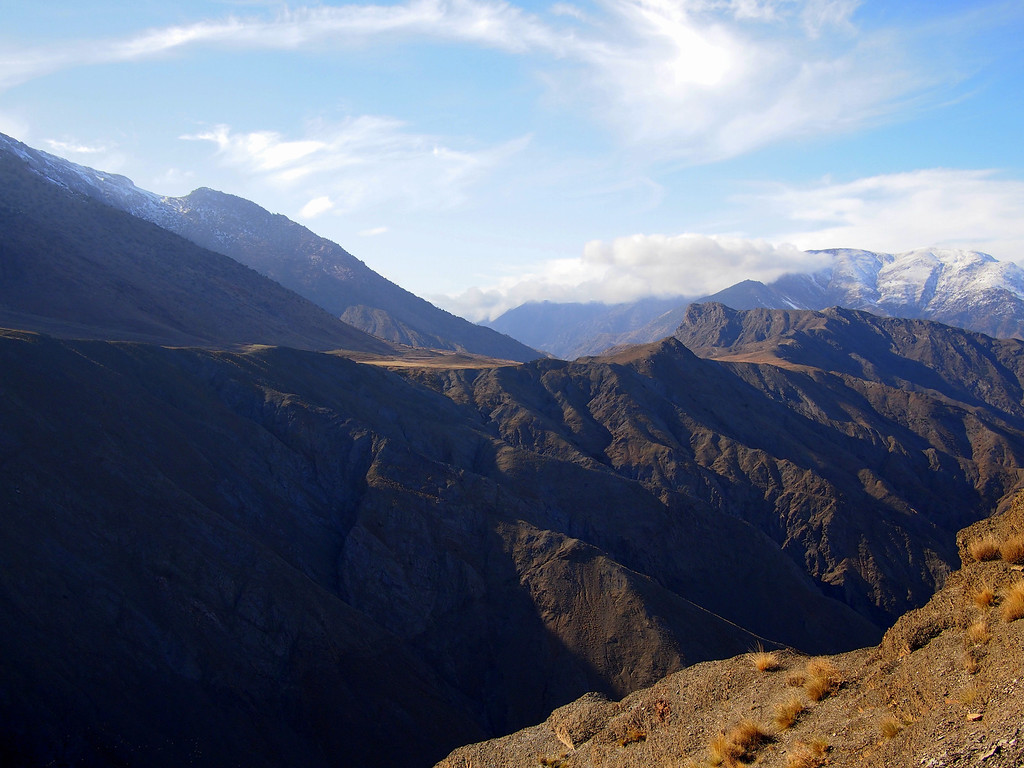 Driving through on the Atlas Mountains with perfect weather.

Warning others about police nearby:

Despite the adversarial feel of driving overall, people are quick to let you know if there’s a cop up ahead with a radar gun. Usually on the outskirts of town where the speeds drop from 100 to 80 to 60km/hour in just a few metres, everyone coming toward you will flash their lights to let you know you ought to slow down. Avoiding speed traps: bringing drivers together worldwide.

Beware of people selling things at the side of the road:

I’m referring here to the men standing with shining agate on the mountain passes, whistling for you to stop to check out their wares. In theory this is fine, but in practice they actually step onto the road itself, almost chasing you as you go by. Their aggressiveness means that in order to avoid hitting them, you need to weave into oncoming traffic, causing a serious amount of honking. Rinse, repeat, until you’re off the High Atlas.

Build in an extra hour for donkey rush hour:

Coming in and out of towns is an exercise in restraint because the main streets are often the souq streets, with produce and animals and people clustered at the side of the narrow road, pushing traffic to the center. In addition, many Moroccan families have a donkey and they are used to carry purchases from the souq to their homes. Driving slowly will ensure you don’t hit a donkey on your trip but it definitely adds some time to your overall endeavour.

Over and above donkeys, some additional road hazards exist while driving in Morocco. Namely, 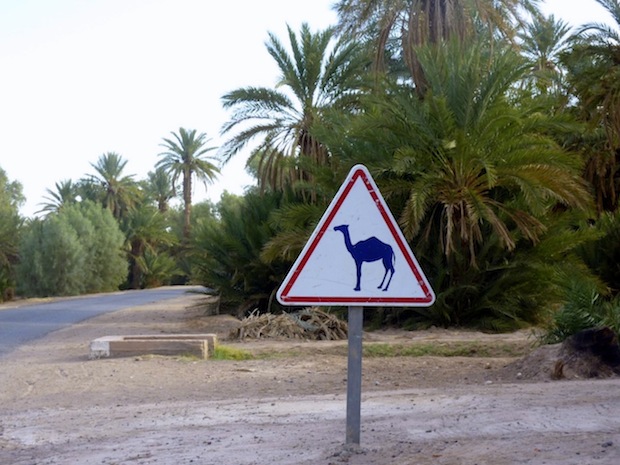 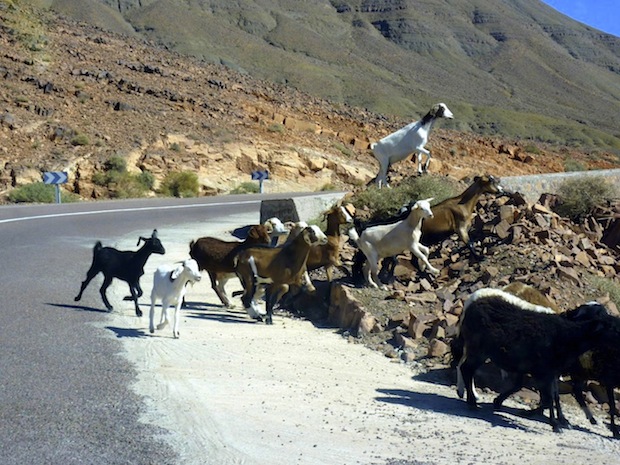 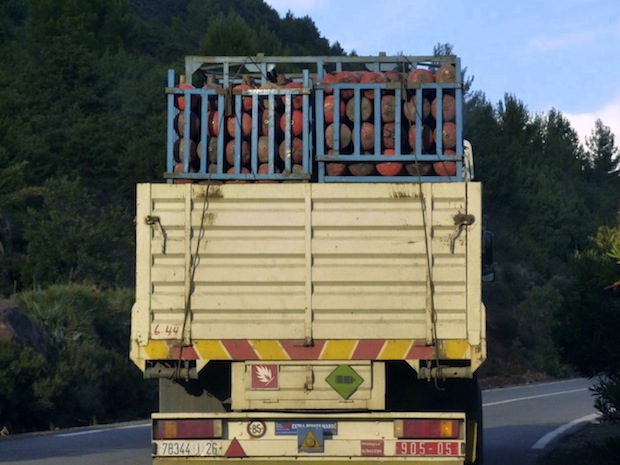 Propane tanks are not in short supply in Morocco – every 3rd truck was full of them.

Fighting the urge to stop for brochettes and tagines:

This is a serious problem if you like food in Morocco as I do, because every town smells terrific and you can practically reach out of the car window and get a few brochettes for the road. Build in lots of extra time if you cannot resist the noms.

Do it at all times.

Morocco is all about the details and driving is no exception. If you get nervous about the chaos and the complicated dance of cars weaving around you, in front and in back, to the side and around insanely tight curves, you’re bound to freeze up and stop enjoying the ride. Instead, it’s best to be aware of the unspoken rules for driving in the country, accept them, abide by them and then turn your time behind the wheel into a festival of fun. With great music on the stereo and an ability to pass any and all cars at whatever speeds I liked, I don’t think anything I did in the country was as fun as my days of driving.

Resources for driving in Morocco:

Three for Thirty:
Climbing Indonesian Volcanoes for my Birthday 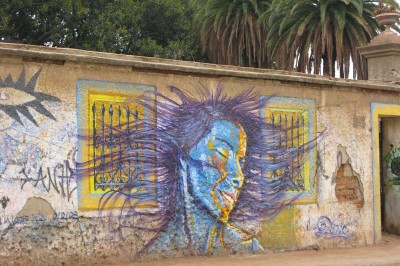 The Colourful Chaos of Valparaíso, Chile 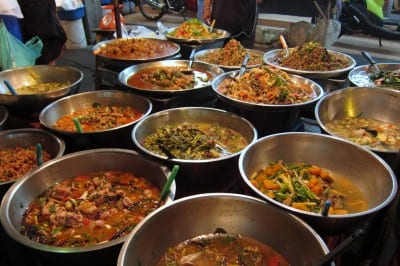 My First Week in Chiang Mai