Where to begin with Bali? My friend’s Joanna’s limited two-week vacation necessarily meant that we were primarily relegated to the tourist trail, and though we managed to find ourselves at a Balinese wedding in full traditional dress, our exploration felt fairly superficial. True to its reputation, travel to Bali is a beautiful experience, both inside and out.

A Little about Travel to Bali

Balinese culture is technically Hindu, but flushed with a tremendously animist influence. As a result, the people spend their days furiously engaged in ceremonies and offerings to balance the good spirits with the bad, and are extremely dedicated to their faith and the routine that it inspires. Temples, houses and even rooms within them are aligned to balance the concepts of kaja (good; the mountains) with kelod (bad; the woods, beaches and the sea), with the restrooms facing kelod and the temple kaja. The architecture of Balinese temples and houses are built with concentrated specificity, usually by consulting local priests. And the auspiciousness of dates plays an extraordinarily important role in everyday life; toothing ceremony, cremation and wedding dates dates are carefully selected under the confluence of three separate calendar systems.

With only a week and a half in Bali, I can safely say that the Balinese are incredibly interesting and friendly, the beaches are full of rolling white sand and crystalline waves and the towns are replete with beautiful, open Balinese buildings. However, it was high season in Bali and those same towns were also brimming with and fast food chains, expensive restaurants and insensitive tourists. We had a great time, but I look forward to returning to Bali after my weeks in Adelaide and to explore the less touristed parts of the island and further learn about the culture.

A small island off the coast of Bali, Nusa Lembongan has two primary sources of income: tourism, and seaweed. As a result, the island is jam-packed with surfers (mostly from Australia) and the pungent smell of seaweed baking in the hot sun permeates your clothes, nostrils and hair. It is a delicate combination. Though our last-minute trip only lasted one night, we managed to do a fair bit of exploring. 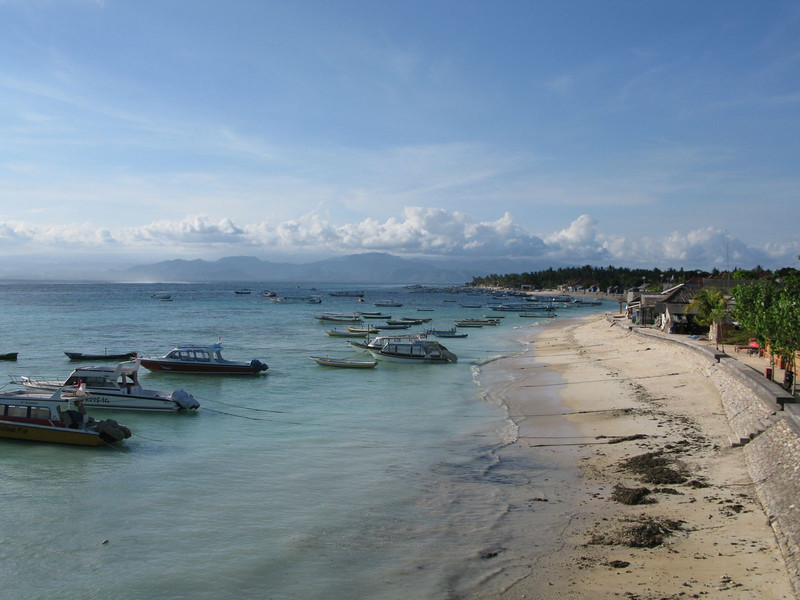 The island’s main beaches are dotted along the stretches of sand that coat the 8km square island, with the main fishing village and cheap lodging in the middle (where the ferries arrive) and smaller, more expensive places to stay flanking the village to the north and nestled in the cliffs to the south. We wandered along the full west coast of the island, finding a tiny, quiet bay where we could swim and sitting on a terrace to watch the sun go down. We ended up staying in a resort midway between the village and the northern cliffs, reachable by a 1.5ft wide concrete path perched 5 feet above the water – meaning that we had a precarious tip-toed walk to dinner and back again.

We made sure we consumed no alcohol during dinner; we would have surely tumbled into the waves below on the way back! Our stay was memorable for two reasons: (1) our resort was gorgeous and recently built – but they must have made a mistake with the piping since the bathroom smelled like dead people the minute we flushed the toilet and (2) it was our first beach experience in Bali. It was also a surfer’s paradise, and not a place I would return unless I had a board by my side; there are plenty of lovely beaches in Indonesia where you won’t get hit in the head with a surfboard.

One of many Balinese-style buildings on the island; a typical ‘offering’ made once a day and left on the ground, to balance out the good and bad spirits and protect the house or shop from harm:

Sanur and attending a Balinese Wedding

The Lonely Planet calls Sanur “Kuta in a Cardigan” and, for those of you unfamiliar with Kuta and its hard-partying ways, dirty streets and not-so-classy clientele: the nickname is a good thing. We spent several days in Sanur prior to Nusa Lemongan and returned to attend a traditional Balinese wedding, having been invited by Raka, the owner of a local bar. I met Raka before Joanna arrived, when I went to his bar alone on my first night in Sanur, only to find myself drinking arak with the locals (Raka included) and singing Jason Mraz with the band at the bar within ten minutes of arrival. Once Joanna showed up – joined by my friend Martin (last seen in El Nido, Philippines) and his friend Franz – we went back to the bar and Raka invited us 2 ladies to his cousin’s wedding on July 2nd. Though attending meant that we would be in Sanur far longer than anticipated, we figured that it would be an experience to remember, and we were right!

Pre-wedding, Joanna and I went to the markets to buy a traditional Balinese wedding outfit to wear. Though we were assured by Raka that this was not necessary, we wanted to make sure we were both presentable and respectful of the culture – and the outfits would make a fantastic souvenir of our attendance. We each found a thick sarong (mine in gold and purple, Jo’s in gold and green) a sheer lace kebaya, and a sash at the waist. Ketut, the lovely head of staff at Flashbacks, helped us wrap ourselves in our wedding outfits and pull our hair back with flowers, waving us off with a big smile when Raka and his friend John arrived to take us to the wedding.

The wedding itself ended up being a cultural crash-course in all things Bali. As with India, Bali is divided into rigid castes, with each caste dictating a person’s place in society, as well as the type of marriage that they can expect. From highest to lowest, the castes are: Brahmans (holy men and priests), Satrias (warriors, often comprising nobility), Wesias (merchants) and Sudras (most of Bali’s population are Sudras, a ‘peasant’ caste).
Unlike India, there is no caste of untouchables. Raka and his family were Brahmans, meaning that the wedding was – and I am understating here – quite a to-do. There were at least a five hundred people in attendance, and the guests were seated according to caste; the Brahmans were allowed to witness the ceremony, while the Sudras sat out in the parking lot. Between those two areas (and castes) were seating and food for the middle two castes, as well as a 40-person band playing only drums and bells. It was chaotic and fun and completely otherworldly.

Jo and I sat in the middle of the many courtyards, unsure of what to do or whether we would be stepping on people’s toes, literally and figuratively, were we to explore. On my way to finding the washroom (a 20 minute endeavour), I ran into the only other tourists there, a couple from Australia who worked with the groom’s brother. They encouraged us to go and see the bride and groom for ourselves, making us comfortable with the fact that we were exempt from the strict seating arrangements. We then stuck into the Brahman courtyard, and were met with smiles and laughter and applause – two midget white girls in full Balinese dress making waves! Not only were we able to see the ceremony, but we were pushed into the courtyard thereafter to take pictures with the bride and groom.

It was a lovely day, and we were both grateful for Raka’s invitation to the wedding (and willingness to chauffeur us there and back despite being on ‘family duty’ as well!). I’ve sent my wedding outfit home for safekeeping.

Oh Ubud. Forty-five minutes north of the airport, Ubud is home to the best of Balinese artists, woodcarvers and tailors, with a bustling market and dozens of rice paddies rising up from the city centre. Unfortunately, it has seen a meteoric rise in tourism after Elizabeth Gilbert’s Eat, Pray, Love (my “hater’s guide” to Eat Pray Love the movie is here) and was chock full of tourists and taxi touts. Our best moments in Ubud came as we donned our kebaya and sarong and sash and slipped away from the main road into Pura Desa temple.

Though the temple was technically closed, we listened to the open gates and not the “stop! closed!” signs and snuck in anyhow. Paces from the busiest road in Ubud, we were suddenly surrounded by birds, stone gargoyles and creeping vines heavy with flowers. It was beautiful. Emboldened by our success at escaping Ubud whilst in Ubud, we made a beeline for the Water Palace Temple and re-dressed ourselves. Upon entering the courtyard, we were greeted by the men working in the grounds with a resounding “Ah, you are Balinese!” and a sea of smiles. The priest came by to check on the progress of the men painting masks and building costumes and told us that he was honoured by our efforts, rewarding us with a long history of the temple and its role in Ubud.

Overall, Ubud was a graceful, charming place to visit, but I would like to spend more time there in order to find the many other nooks and crannies to whisk me away from the touristy centre.

Next up: the Gili Islands!