My birthday tradition is to climb a mountain every year on my birthday, preferably somewhere new. For my 30th birthday last year, I climbed up Gunung Agung in Indonesia, despite an injured ankle and a guide who was so sick that he fell asleep behind a pile of rocks at the summit. This year, I had planned a trip to Nepal with my brother, but because I re-injured my ankle in Bangkok and had bronchitis not too long ago, I took my doctor’s advice and bowed out of Nepal. Instead, I decided to visit the Pacific Northwest and try my hand (foot?) at climbing South Sister. Joining me was Peter West Carey, travel and wedding photographer and all around nice guy.

My usual plan is to camp out at the summit, to watch sunrise on my birthday. The camping regulations for South Sister weren’t very cooperative: 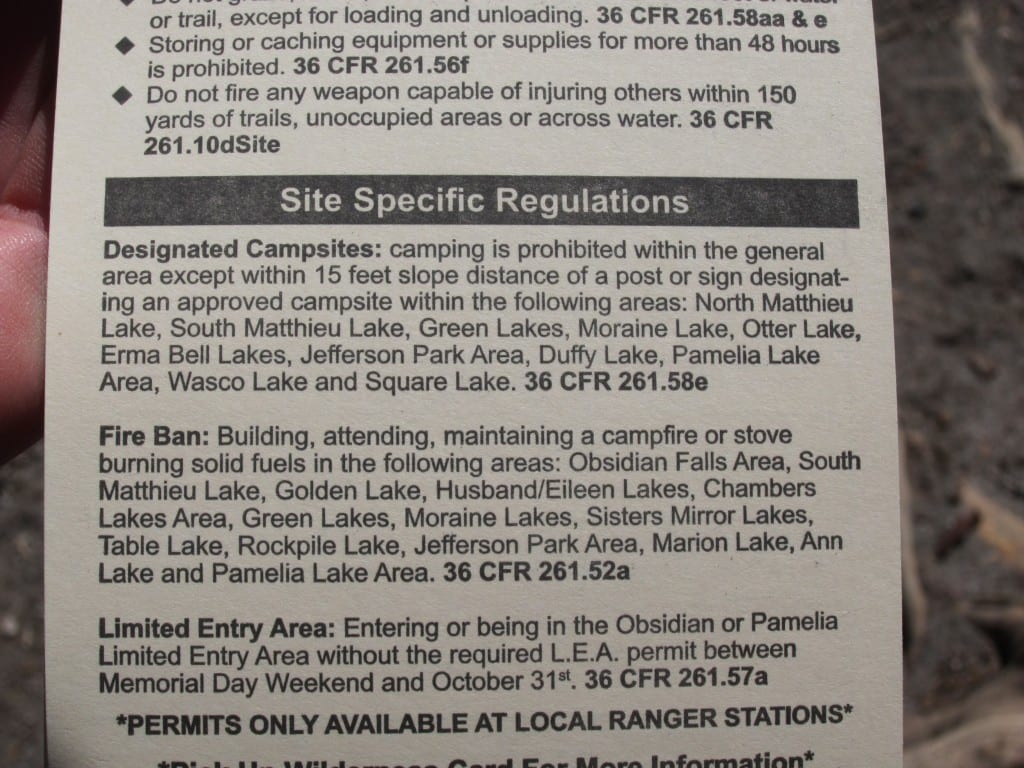 However, having camped out (illegally) on the Great Wall of China, I still hoped we would be able to do the same atop South Sister. We decided that we’d explain the birthday mountain to the ranger if we were found out, then explain that I came all the way from Canadia for my birthday mountain in Oregon and plead with him to let us camp. Luckily, none of this was necessary as we were one of several people (and one dog) camping atop the summit.**

** 2019 note: In case this joking tone wasn’t clear, being Canadian doesn’t exempt me from illegal activities, and were it today I would have tried to get permission ahead of time instead of snuck up the mountain, or not done the overnight at all. A reader pointed out that this is not responsible behaviour and I agree; it was a long time ago, and like other mistakes I’ve made on my travels I’ve learned a lot along the way. 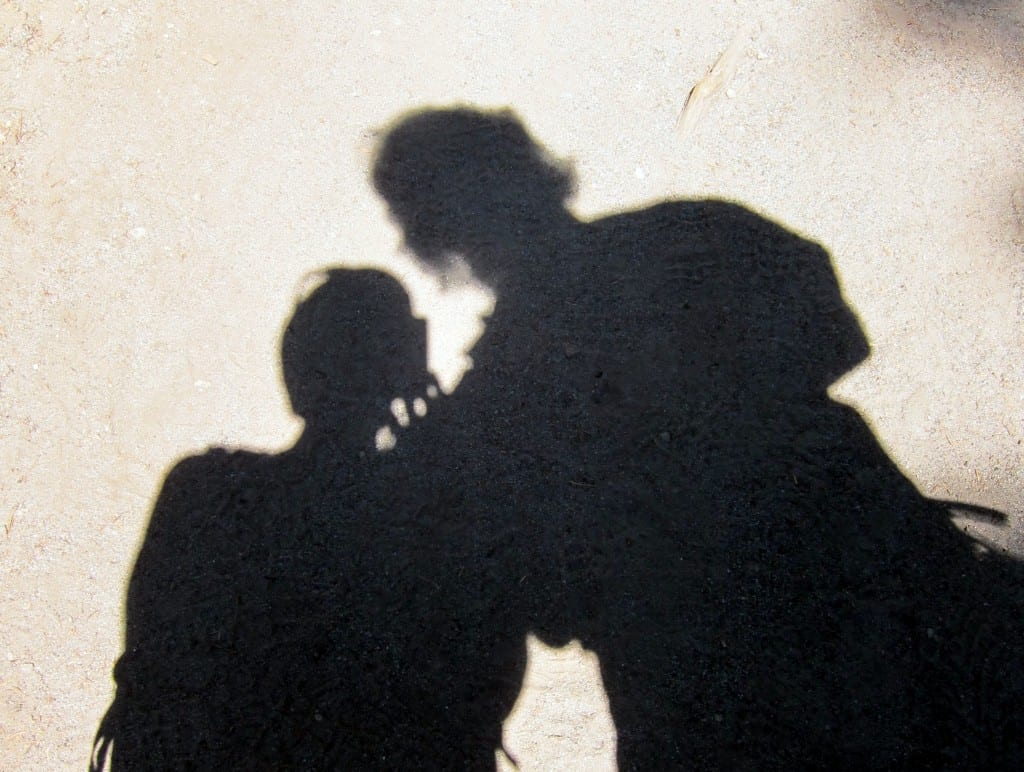 Pre climb, Peter and I in the sun

Unfortunately, our navigational skills were not perfect and initially we took the wrong trail up the mountain. It wasn’t until we came across an intersection a mile up that we realized we were headed in a very roundabout direction, and the 3 horses that passed by us at that moment only solidified our mistake. We turned around, went all the way back down and found the proper trailhead for Take 2.

The first part of the trail took us sharply upward in a thick hemlock forest, with switchbacks over 1.5 miles (with no mountain in sight). Emerging from the dark forest, we were treated to a vast plateau with the turquoise water of Moraine lake to the right and Broken Top mountain in the distance.

In front of us: the rest of the South Sister climb: 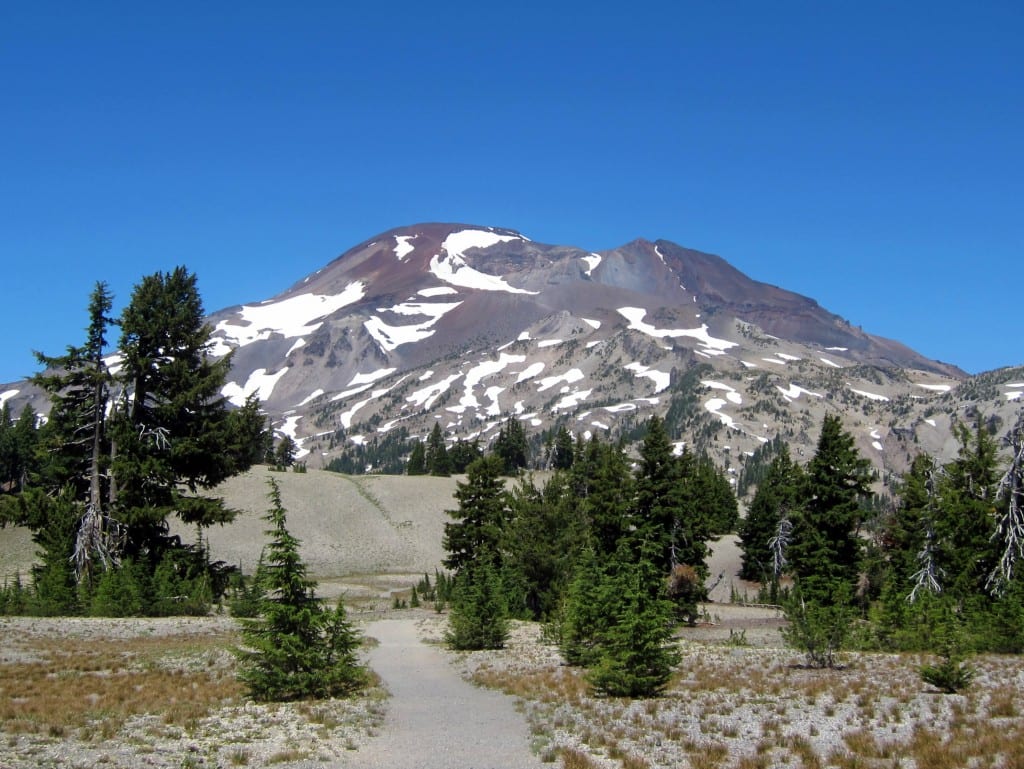 Following the Moraine lake plateau, the trail got steep rather quickly and snow patches from the Lewis glacier dotted the slope.

This was a perfect time for rest, water and – my favourite – “resting the gimpy leg”:

Though the trail was replete with other hikers (and many dogs), we also met some other friendly animals along the way:

Following the snow patches, the trail looped steeply uphill with mostly grey scree and loose, rust-coloured rock to conquer for the next few hours. One step forward, two steps back. When resting my ankle midway up the last section of the trail, we met 3 people on their descent who said the last 500 feet took them 1.5 hours to crawl up, slowed down by both the altitude and the dusty rock. Having made it to the very top, gasping at 10,000 feet, we turned the corner of jagged rock to come upon a beautiful glacier field encircled with a thin rocky trail:

We pitched the tent at the rim of the crater, with only inches between the peg and the drop off of a cliff on one side, and the glacier on the other. Despite the throbbing in my ankle, I was thrilled to have made it to the top. 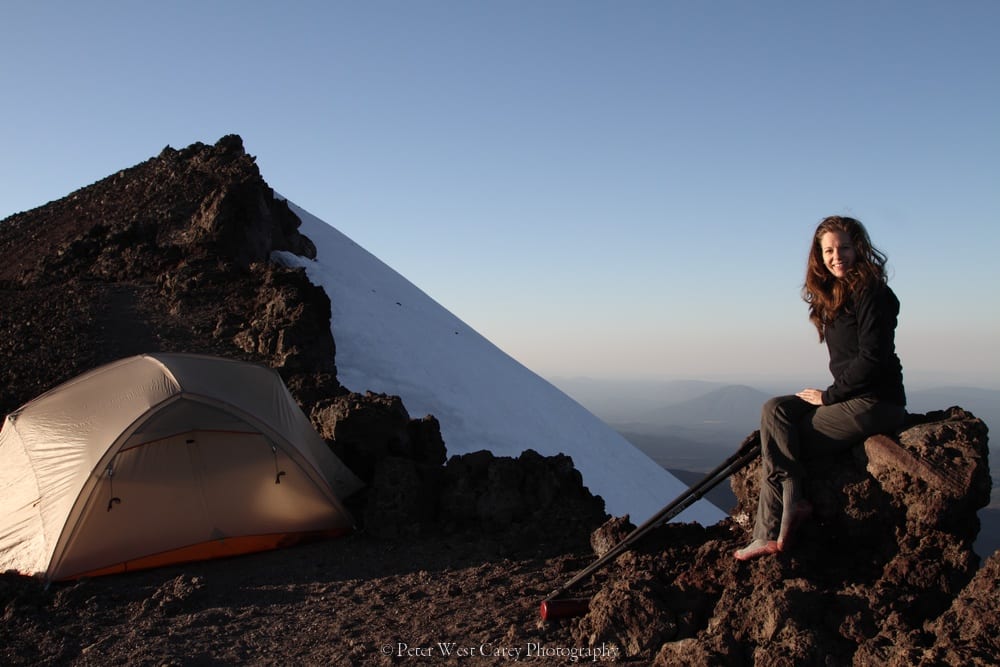 On the horizon, the shadow of the mountain itself looming over the valley below: 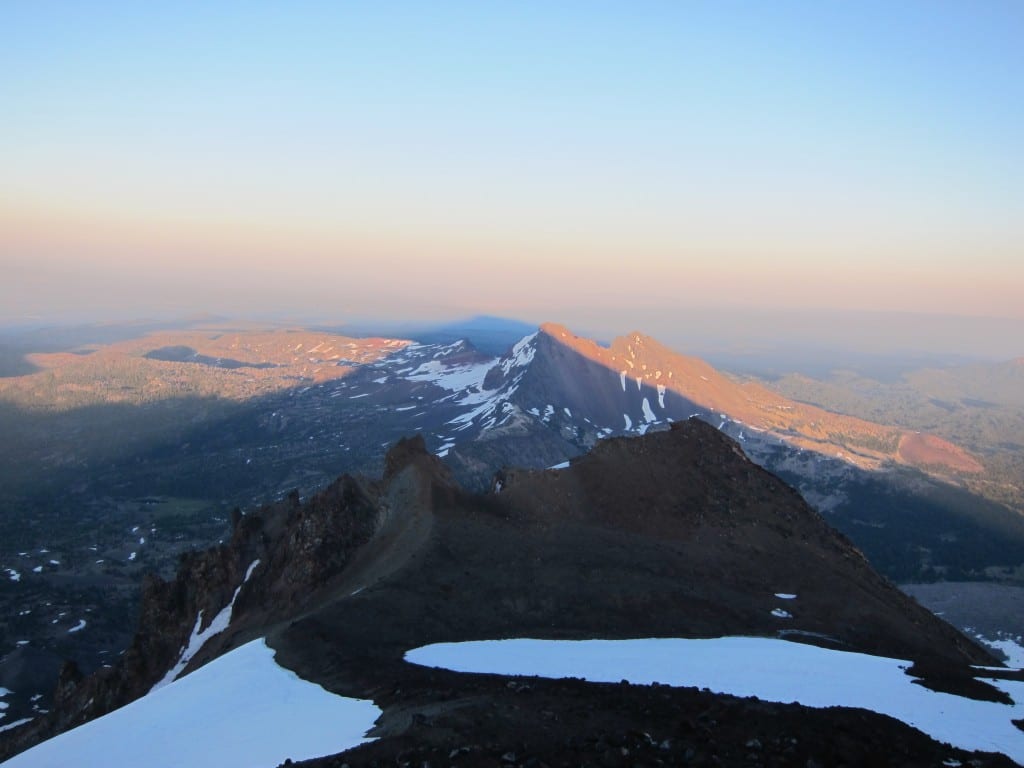 And what better way to celebrate a marshmallow enthusiast’s birthday than with actual marshmallows? Peter pulled a bag of mallows out of his pack and I was one happy camper:

Not everything atop the mountain was in the view: these beautiful yellow flowers caught the late afternoon sun perfectly, nestled between the lava rock atop South Sister: 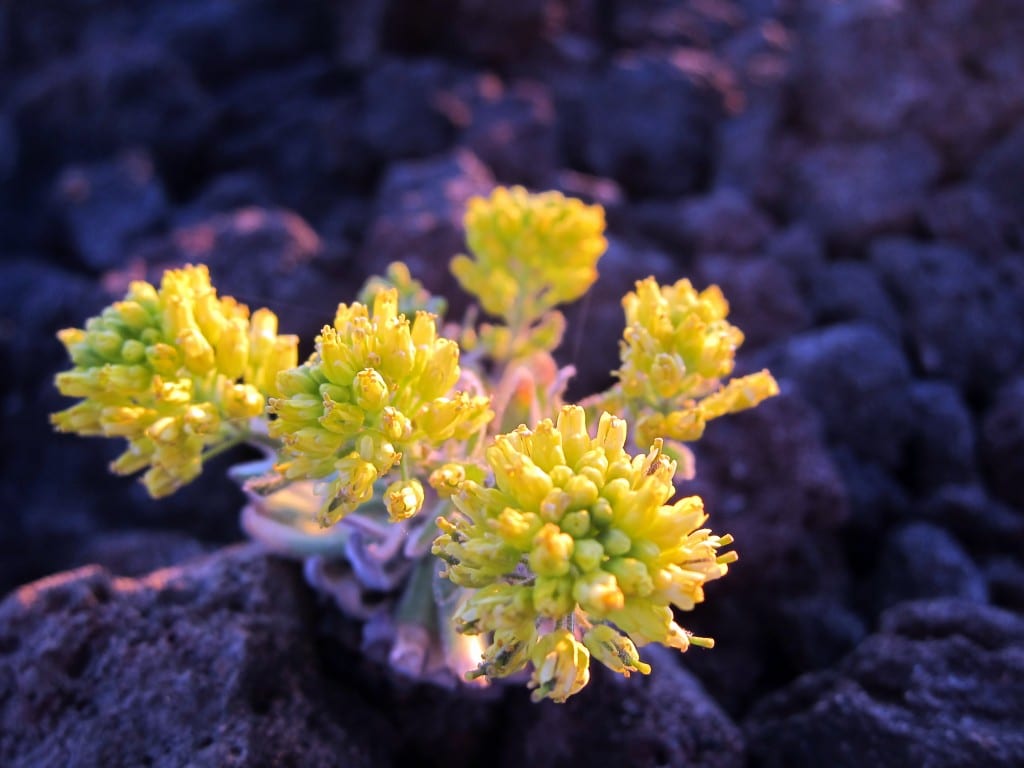 And as dusk fell and the moon rose over the glacier, the temperature dropped and the sky deepened. A perfect way to usher in a sky full of stars and a glimpse of the Perseids meteor shower. After dark, a lightning storm to the south provided a great backdrop to an already beautiful scene: meteors, lightning, a sky brimming with bright stars and copious marshmallows. Couldn’t have asked for a better evening.

The next day, the sunrise was viewable from the tent at 5:30am and lit up the sky in a joyous array of colours.

From the top, a long way back down:

The descent definitely hurt the ankle, but took far less time than the ascent (though there were many more mosquito bites). Several people on their ascent wanted to know why we were heading down so early and were surprised to hear we camped out on the summit. A terrific way to spend my birthday morning, and I’m thankful to have seen Central Oregon from such great heights. Special thanks to Peter for traipsing across state lines to climb with me, and to Jessica for hosting me in Portland.