With an emphatic shake of the head, I was denied my soup.

Not only was I given a derisive, decisive shake of the head, but as soon as the soup stall owner dumped his dirty dishes into a bucket, he lifted his hand to give me a vague version of the royal wave, a very Vietnamese signal that means anything and everything. It could mean “I don’t know what you are asking”.  It could mean “we don’t have what you want”.  It could mean “I do not know how to give you directions so I’m just going to shake my hand at you”.

And in this case, it meant “listen crazy lady, I am not going to feed you breakfast.”

I did not expect to find myself in the middle of a soup stand-off at dawn. Bleary-eyed, without coffee and wholeheartedly confused about why I was being denied a meal, I stood in the middle of the market and blinked in the morning sun. Up early to see the floating markets of Cai Rang, I was now wandering the wet market on land, caught in a vortex of sensory overload, of fruit and vegetables and thrashing fish in shallow bowls of water. The best way to navigate the dawn markets is to arrive already hungry, letting your nose lead you to your first snack of the day. In my case, a steaming pot of bun rieu soup. 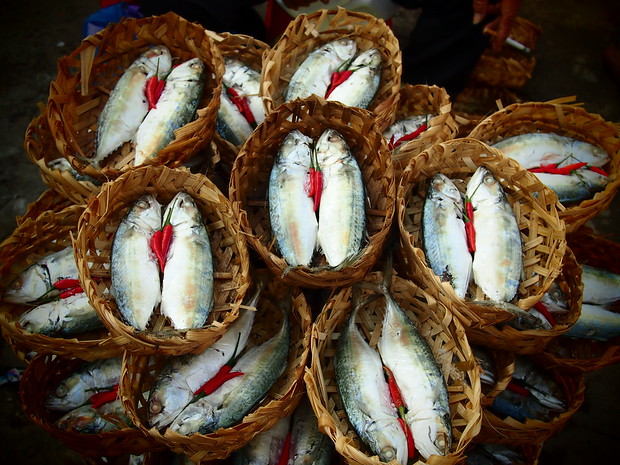 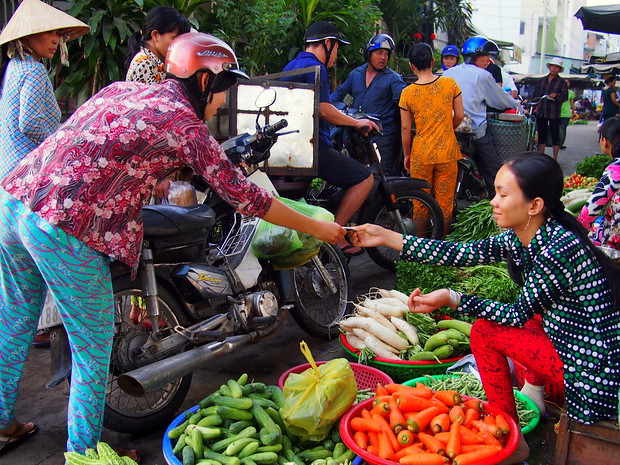 Originally from the North of Vietnam, bun rieu is a crab-based soup unknown to me prior to arriving in the country. I tried my first bowl two days into my trip and it quickly catapulted its way to the top of my personal soup hierarchy. There are different versions of it – bun rieu cua is with crab, and bun rieu oc with snails – but the base of the broth is quite similar and both make my stomach very happy. My last meal in the country was a bowl of bun rieu cua from my favourite vendor in Ho Chi Minh City, two sisters who ran a clean and tidy soup stall across from my apartment with their other family members, a huge vat of broth steaming into the alleyway. “We are sad you are leaving” they said, shaking their heads at me as I rushed off to finish packing. “But you will be back – you love soup.”

The original Northern styles of bun rieu are more simple, focusing on the broth and the contrast in consistency between the soft crab and the more textured tofu. For the snail-based version, tomatoes and large snails compete with noodles for real-estate. The colour of the broth is golden with hints of red, a subtle, sweet and tangy taste all at once. Freshwater paddy crabs are pounded into a fine paste, strained and the liquid is used as a base for the soup. Annatto seeds and tomatoes contribute to the beautiful colour. A blood cube is often included, great for extra protein and iron. What’s left of the crab meat is used for making a crab and egg sausage that is usually served with the soup. Accompanying the dish are a bright purple fermented shrimp paste and a wet chili paste that can be used to add additional flavours at will. As with many soups in Vietnam, the broth is served with a plate of steamed split morning glory or water spinach stems as well as shredded banana flower, both for adding to the soup before eating.

I’ll be writing a post called “A Tale of Two Phos” to talk about the differences in pho broth and soups from North to South, and as with the classic pho, bun rieu varies quite a bit between the geographic regions. In the South, as with many of the dishes that have been transplanted and changed, the soup became more complicated. Small freshwater crabmeat was mixed with pork and herbs and rolled into mini meatballs, with the meat put back in the crab shell and steamed, added to the soup when it is served. Smaller snails pop up from the depths of the bowl, peeking through between the pieces of tofu and the crab shells. A thin strip of pork sausage is added to the mix. In HCMC, thin bun noodles are used in the broth, and sometimes additional meat, thin slices of pork.

Wandering that Cai Rang market at dawn, I stumbled upon a woman selling pig meat, delicately scraping the hair off a pig’s head to have it presentable for selling that day. Many of us that grew up in the west do so unused to seeing dead animals. Understandably people come to these wet markets often find the butchering sections jarring. I know many readers might be vegetarian (I was too for several years) but for those who do eat meat, I’d rather know where my meat comes from and appreciate every step in the process in doing so. Buying pre-packaged, sterile meat from a supermarket provides no insight into the animal it once was; we should appreciate the origins of what we eat, no? It’s part of why these markets are so compelling to me. Start to finish, a wet market shows you your food – whether you want to see it or not.  The woman in Cai Rang was so incredibly concentrated on getting that pig head to look as clean and sellable as possible, meticulously grooming it for the morning rush.

Just across from this grooming process was an older woman sitting on the ground and selling freshly skinned frogs, and on her lap was a delicious-looking, steaming pot of soup. I immediately decided that I needed that soup. Pointing, I asked her where it was from and she cackled loudly, directing me to a bun rieu stand diagonally across the street. Apparently in my fascination with her tray of frogs, I neglected to look across the way. Eyes creasing in mirth, she smiled widely and grabbed my forearm, physically pushing me in the direction of the stall. Excited, I hopped over for what I hoped would be my first of several breakfasts.

Except the man running the stand would have none of it, meeting my pleading for soup with a stream of nos, and shaking his hand at me vociferously.

I tried the name of the soup, asking for bun rieu cua so that he realized I knew exactly what I was getting. Another shake of the hand, and with that he turned away. Stumped, I stood mouth agape trying to strategize.

While thinking of ways to convince him otherwise, the frog woman across the street marched over to me and grabbed my forearm again, launching into a blistering monologue to the soup man that was punctuated by gestures at me, gestures at the soup and a very clear gesture to the soup guy himself. Another older woman wandered over from across the way and joined in, both of them now holding onto me. Flanked by two toothless ladies, each holding onto my arm, and with neighbouring cafes and shops watching attentively, I wondered what the soup stall owner would do. 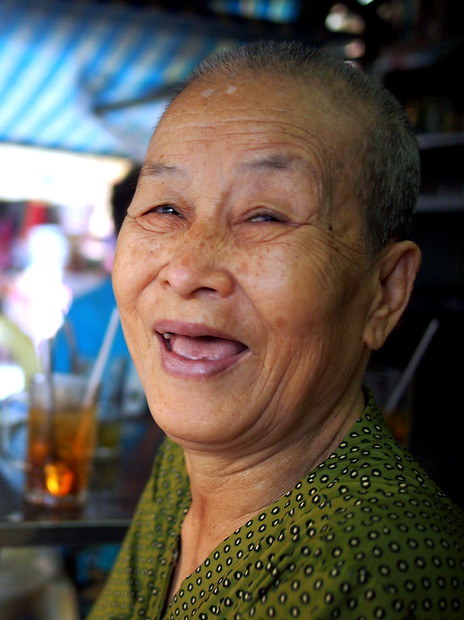 Shaking his head and throwing up his arms in defeat, he instructed his wife to make me a bowl of bun rieu. Satisfied, one of the women meandered back across the street. I sat down at the stall. The soup arrived in a few minutes time, and of course it was fabulous. But what made this experience so funny was not just the refusal of soup, but what happened next. My soup saviour who wandered off came back with 4 of her friends in tow, all older women, all beaming. They sat around me in a semi-circle, laughing at how I used chopsticks with my left hand, asking me where I was from and how old I was, nodding in approval as I added shrimp paste and chili to the bowl.

It was a community meal in the truest sense. Throughout my soup consumption I had at least two of these women holding on to my hand or touching my face. “Instant grandmothers – just add soup.”

Everyone waved furiously as I rushed back to the boat to return to my guesthouse.

The next day I returned around the same time, craving another bowl of the soup. The cafe next store was full of men sipping their iced morning coffee, and the soup stall was full of women. The same women that sat with me the day before. As I walked up I was rewarded with a big cheer and the stall owner shot me a side-eye to rival the best of them, turning to make me a bowl of bun rieu without my even asking. The men next door craned their heads my way to figure out what was going on; the women all rearranged their chairs so that I could sit in the middle of their table.

When I returned to Ho Chi Minh City I told my friends about my experiences in the Mekong, including the refusal to serve me soup. Everyone was confused – “why would they say no?” I’m still unsure myself but I suspect it is because he thought I would not like the soup. My landlady often seemed appalled at the foods I was eating. Coming home from a day of food crawling or trolling through District 5 in search of new eats, she would warily ask me what I tried that day. I would expound upon them enthusiastically – “I tried venison hu tieu in saté style!” or “I tried pig’s ear spring rolls and crab soup!” – and she would shake her head at me, saying that foreigners were not supposed to like these foods. “Why do you like these foods??” as though something was wrong with me for doing so.

I mentioned in a prior post that a Vietnamese woman bought me lunch because she was so shocked I was eating fermented shrimp paste and pig’s ear spring rolls, her initial disbelief replaced by delight. She thought I couldn’t possibly know what it was I was eating, else I’d have run screaming the other way. I suspect that was this soup vendor’s problem. He genuinely thought I would hate his soup, the deep purple, pungent fermented shrimp paste and the crabby broth, and he did not want to take that risk.

Happily these wonderful women came to my rescue because  — for serious — it was quite honestly one of the best bun rieus I’ve had. But even if it was terrible, the interactions that came with it and the many smiles that started my day off right were well worth the effort.

Worth it: bun rieu from Cai Rang’s wet market

I continuously advocate food as the ideal tool to connect with local people and this is a perfect example of that fact. The universality of eating juxtaposed on very different eating cultures and habits makes any interaction with a country that loves food extremely rewarding. And Vietnam definitely loves its food.

More from the Mekong soon – markets, a classic Vietnam/Canada love story and other features – in coming weeks. 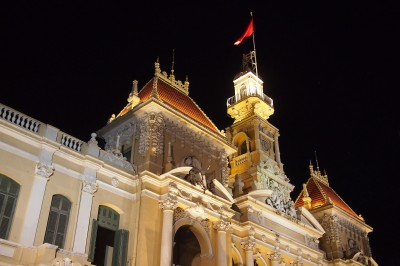 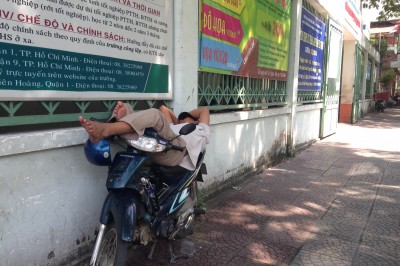 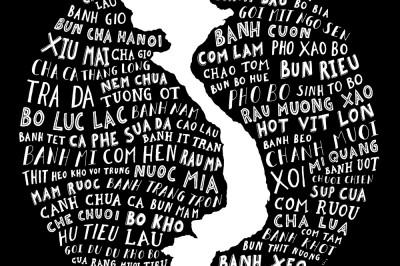