When we were younger, my brother Cale and I fought like cats and dogs. Like most siblings, that animosity waned as we aged, replaced by a very strong bond and a mutual love of random adventure. As adults, we couldn’t look more different: he’s tall and bearded, I’m short and (thankfully) without facial hair. Despite the fact that we’ve grown into different people with disparate careers, we have much in common. We’re both storytellers, we both refuse to take ourselves too seriously and we both believe that pushing yourself to do as much as possible in life is an excellent way to live.

Cale and me, a long time ago.

Happily, Cale joined me in the Philippines for a two week exploration of Bohol and northern Mindanao’s Camiguin island, which allowed us to test out whether we could travel together as adults without killing each other. The verdict: 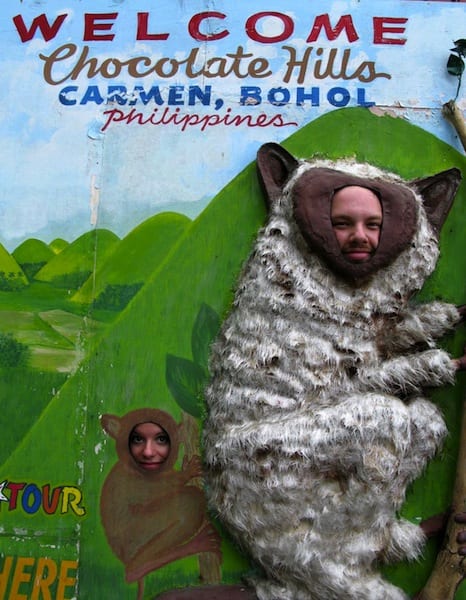 Cale and me, with present day tomfoolery

We did just fine, despite an epic screaming match atop an active volcano in Camiguin.

As the years have gone by, we’ve also found that we have similar taste in friends and I was excited to spend my first Canada Day in Ottawa hanging out with him and his friends. The plan? Canada Day in Ottawa (with Will and Kate, of course), Royal High Tea at the Chateau Laurier’s Zoé Lounge and then an evening of BBQs, fireworks and late night conversation, followed by a camping trip to Fitzroy Provincial Park.

Which is exactly what we did.

First up: Concert on Parliament Hill

On the way to the Parliament Hill celebrations, people were giving out free copies of the Globe and Mail newspaper. For reading. Or, you know, for reading and then making into paper hats: 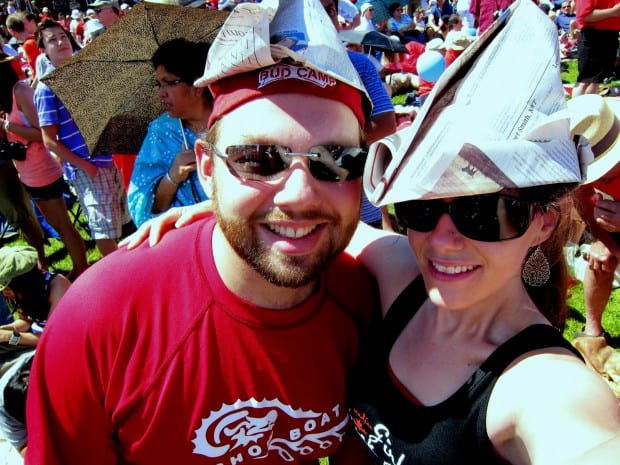 Me and my brother with our newspaper hats. Thanks, Globe & Mail!

Of course, we weren’t the only ones attending the Canada Day celebrations:

A packed Parliament Hill at the start of the Canada Day concert.

Despite the hot sun and the inability for short people like me to actually see the stage, we spent most of the morning sitting or standing on the Hill, listening to music and watching the show. Which, as always, included a flyover, first by CF-18 fighter jets, and then from the Canadian Snowbirds: 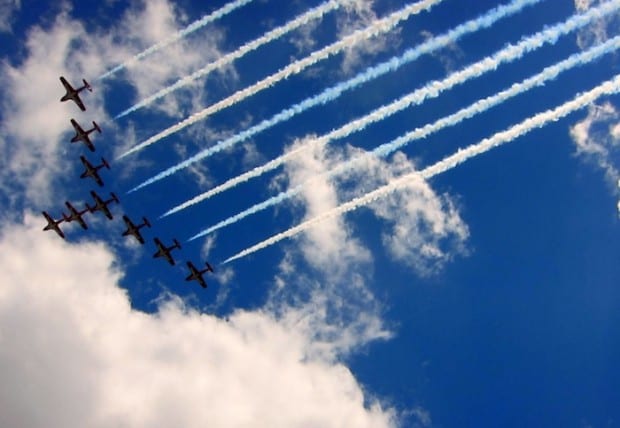 On the first flyover most of the crowd ducked and cringed, missing them entirely – they were quite loud. The photo above was from the second pass.

A High Tea Kind of Day

Sweaty and satisfied from the Parliament Hill concert and fighter plane flyovers, we realized we had only 45 minutes to make it to our 2pm Royal High Tea reservation at the Chateau Laurier. Ever the consummate planner, my brother made reservations a full 7 weeks in advance, and at 13 people we were the biggest group of their day. When the reservations were made, the hotel told him that they were absolutely packed that day, so we could not be late. One problem: the motorcade was inching its way out of Parliament Hill and the RCMP was starting to block off the roads and bridges. What followed was a hilarious, often-awkward obstacle-filled run through downtown Ottawa, dodging crowds, racing down stairs and pleading with the RCMP to please, please let us across this one bridge so we could make it to High Tea. (Understandably, he was not terribly impressed with us). Ultimately, we made it. More than slightly unkempt, but at least we were on time.

I stopped in the middle of the running to take a photo over the Canal; Ottawa really is a beautiful place: 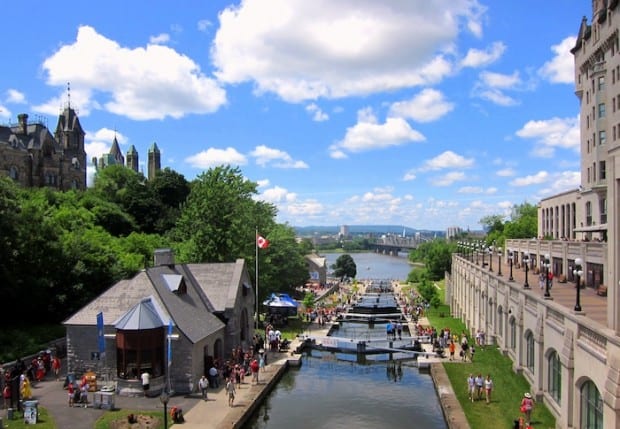 I didn’t realize that the Chateau Laurier would have a gluten-free version of their High Tea menu, but was thrilled to find out that they could prepare one without an issue. With pots of tea, a cocktail and “elegant open-faced sandwiches” (their words, not mine), the 13 of us had an excellent few hours in air-conditioned opulence. 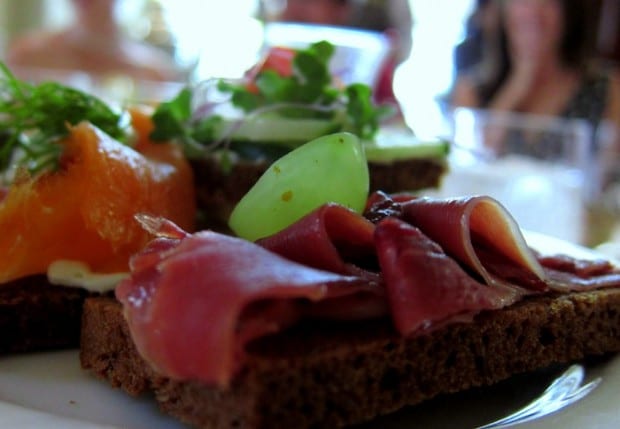 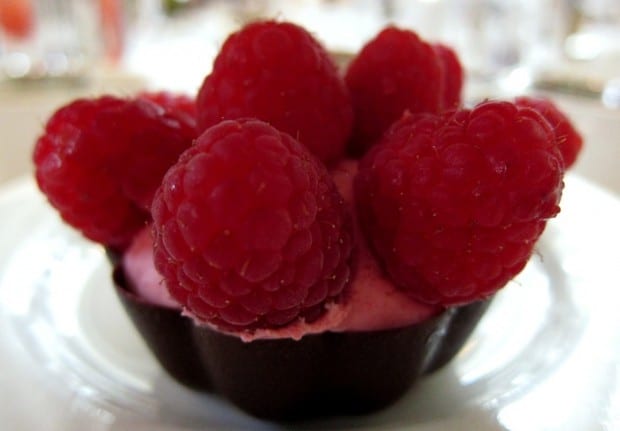 Canada Day: Now with More Will and Kate

Let’s not forget why this year’s Canada Day was so frenzied: Will and Kate. Throngs of people lined the roads to watch the motorcade go by, and when William spoke during the Canada Day concert series on Parliament Hill, the cheers (mostly when he mentioned Kate’s name) were frenzied. 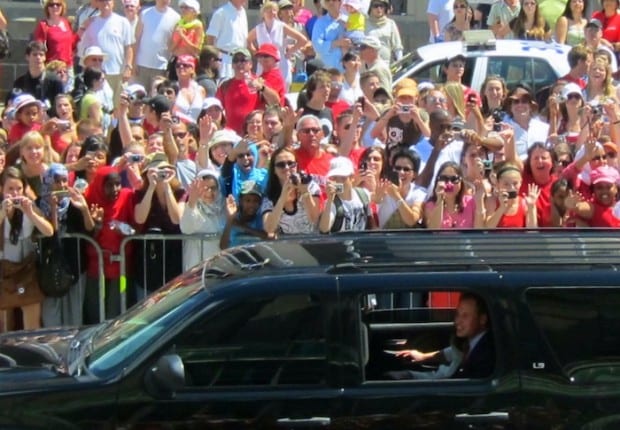 My photo of Kate and William in Ottawa for Canada Day 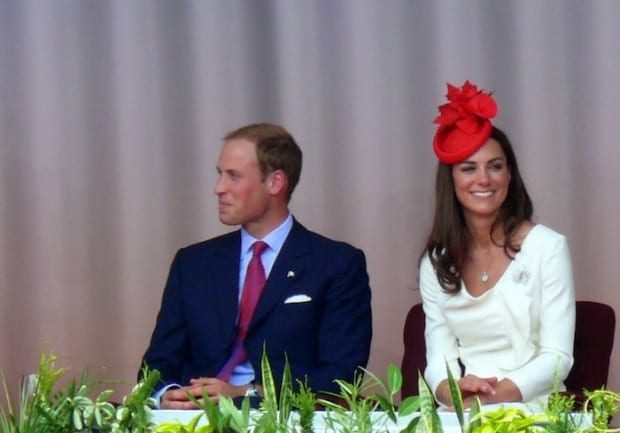 Micah’s photo of Kate & William in Ottawa for Canada Day. I’m going to say he had the better view.

Fireworks over the Rideau

We rounded out the day with an afternoon chatting in the park, a great BBQ dinner and then hopped over to the Supreme Court building to watch the fireworks. Having spent many Canada Days abroad, I’ve missed out on fireworks during the celebrations and these were quite a lovely show. The weather was perfect, the Peace Tower glowed in the background and the rousing rendition of Oh Canada just before the fireworks started warmed my heart. 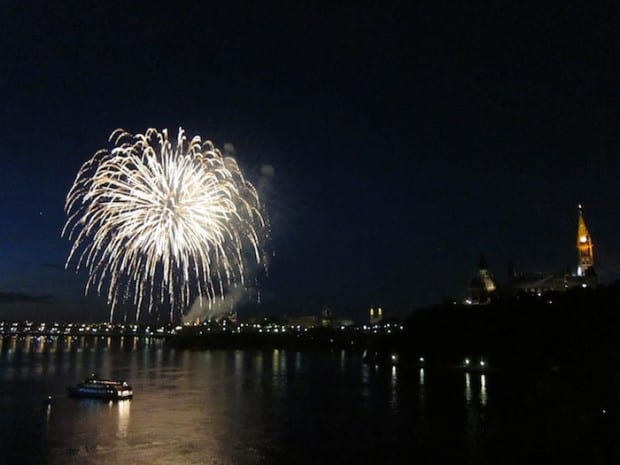 The last of the fireworks, with smoke wafting toward the Peace Tower (aka ‘Little Ben’)

The weekend wasn’t complete without a camping trip to Fitzroy, so we piled into cars the next morning and made our way to the provincial park. 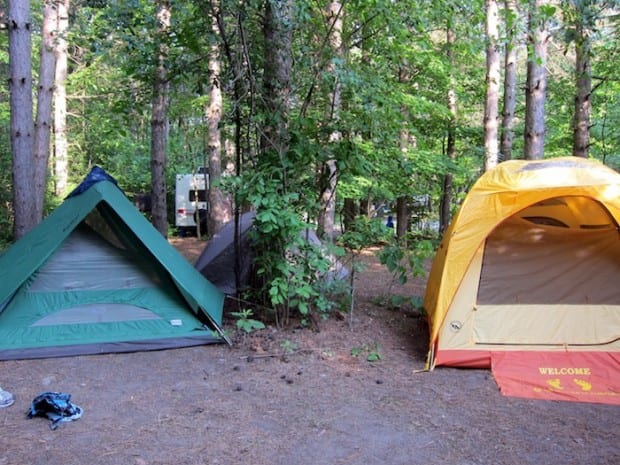 Sandcastles were built (not by me, but I sure admired the results – look at this behemoth!) 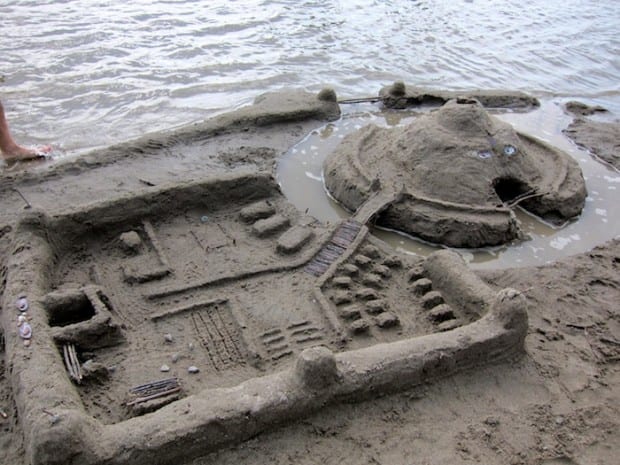 A sandcastle of champions.

Dinner was cooked on the fire (not shown: caesar salad and sauteed onions and portobello mushrooms): 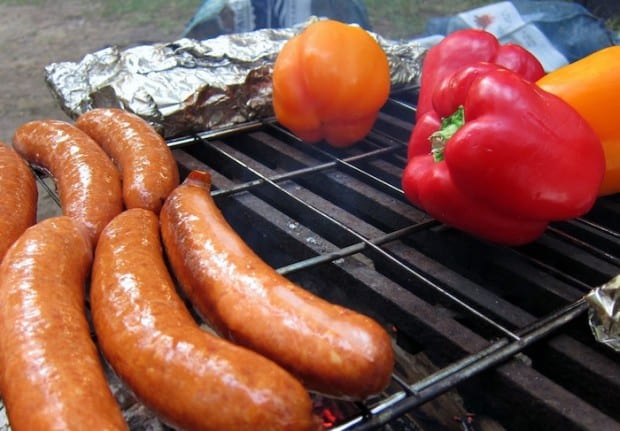 And of course, there were marshmallows: 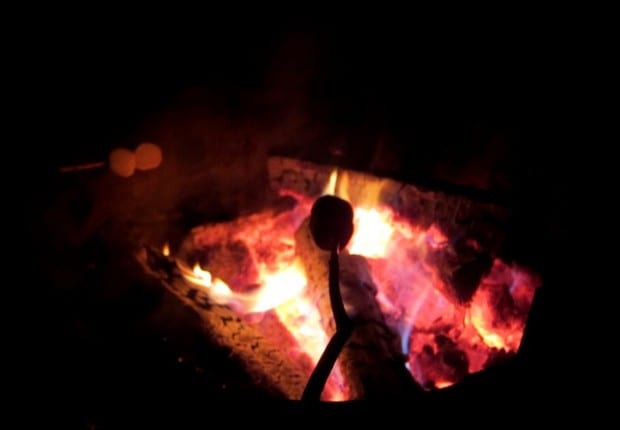 No camping trip is complete without toasted marshmallows.

All in all a terrific weekend. 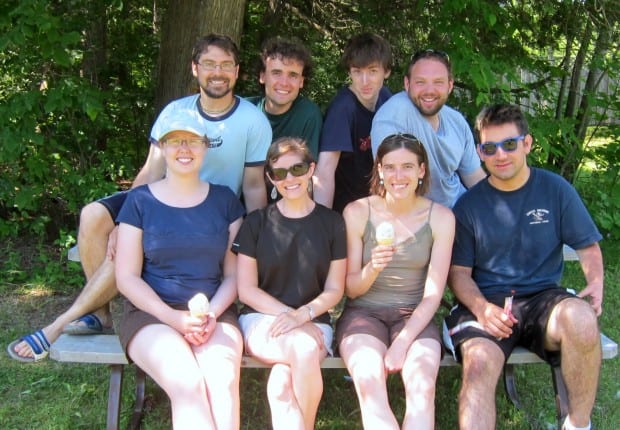 While I still find myself waxing poetic about the street food in Laos or complaining about how there are no dogs riding motorbikes in North America, Ottawa was the only place I wanted to be for Canada Day.

One final note: while camping, my leg was hit by a particularly juicy birdcrap, bringing The Birdcrap Counter to 12 birds and 1 bat since April 1, 2008.

Uyuni to La Paz, Bolivia:
The Bus Ride from Hell 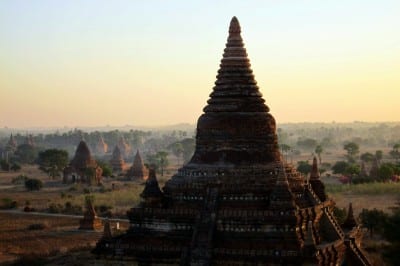 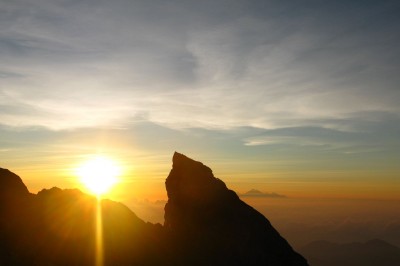