After winding through the High Atlas mountains – which was nowhere near as fun by bus as by rental car, using the N9 as my personal race track – we headed to Essaouira for a few nights by the sea. While the sun was shining when we arrived in the late afternoon, the next morning was dreary and damp, angry clouds and a flurry of seagulls at the port’s edge when we wandered by.

A little about Essaouira

Formerly known as Mogador, the city was a trading post for centuries, rebuilt in its current form by Mohammed III in 1764. With one eye on Europe and a need for a port close to Marrakesh, Mohammed III centred shipping on Essaouira. Spices and goods were funnelled from sub-Saharan Africa to Morocco, over the Atlas Mountains and into Marrakesh, then onward by sea from the ports of the city. Fishing figured prominently, all handled by what was then known as the Port of Timbuktu. 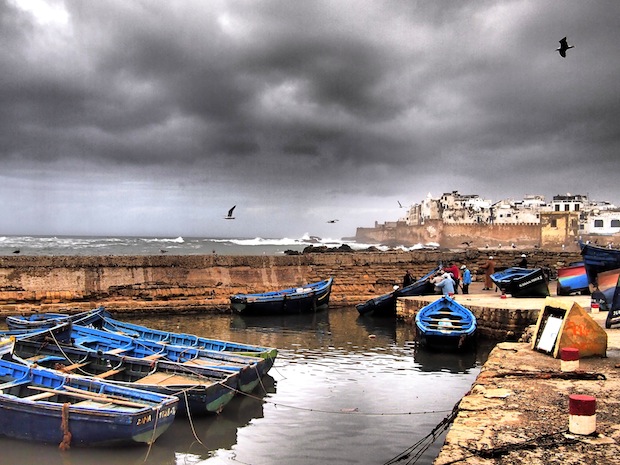 By the afternoon, the sun broke through and we all returned to the port for a seafood lunch, freshly grilled after the morning’s catch. I noticed an older man with a trendy pair of Ray-Bans, the same ones I was wearing (purchased in Bangkok for a whole $2). Joking with him that I ought to eat at his restaurant because we had matching shades, he asked for a photo. Just as the shutter was about to close, his waiter stuffed a lobster into the frame.  The last photo in the series has him foisting the lobster my way, as if to say “No, really – you ought to just take it.” We sat down for freshly grilled squid, a plate of pink shrimp, all tiny eyes and soft tails and of course a Moroccan salad. No lunch is complete without the telltale contrast of red on green, ripe tomatoes against crispy peppers, all coated in fresh lemon juice to blend the flavours together. 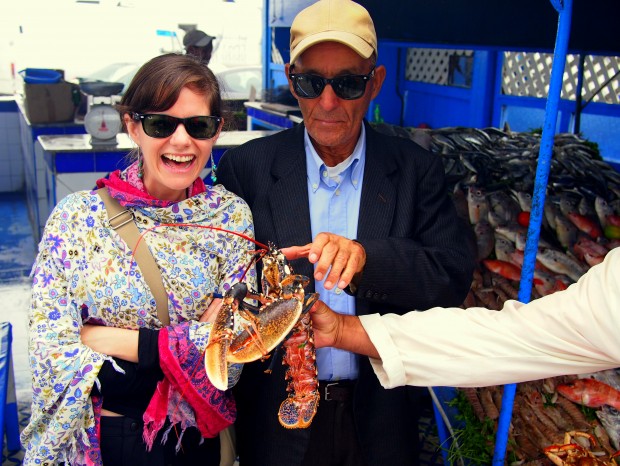 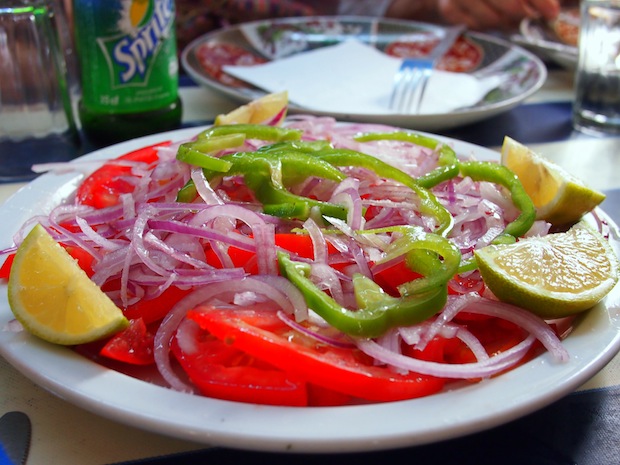 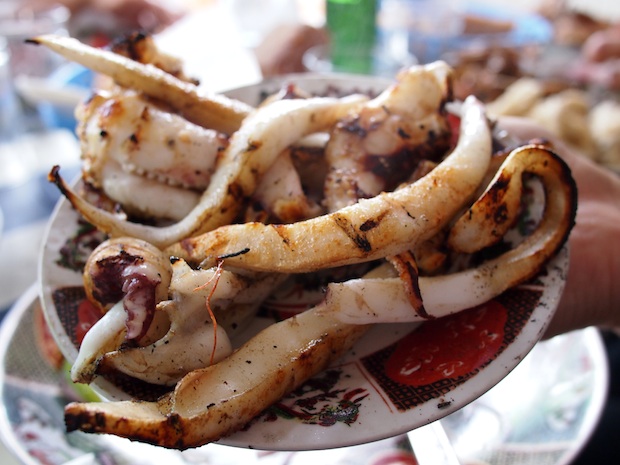 Meandering the Medina in Essaouira

With the sun in full force, I wandered away from the group and into the tiny, spiderweb-like alleyways of the old medina, radiating outward from the main gates. While even the less touristed sections of the old city were crammed with butchers and jalaba vendors, mint-laden wooden carts and constant shouting, these back alleys were completely silent. Only the echoes of my footsteps and the occasional (surprised) Moroccan coming toward me broke the cycle of my thoughts.

I tried, at first, to keep an eye on my twists and turns, to retrace my steps out of the maze and toward the main gates. But after twenty minutes of looping curves and empty doorways, the rumbling of fruit carts in the distance, I gave up and gave in to my sense of direction and adventure. 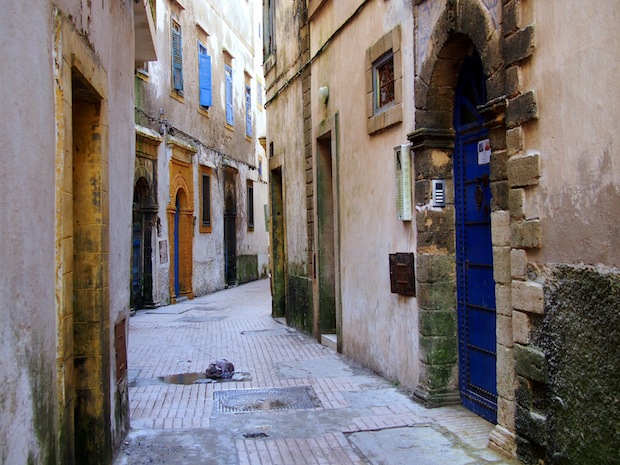 Quiet back alleys of Essaouira 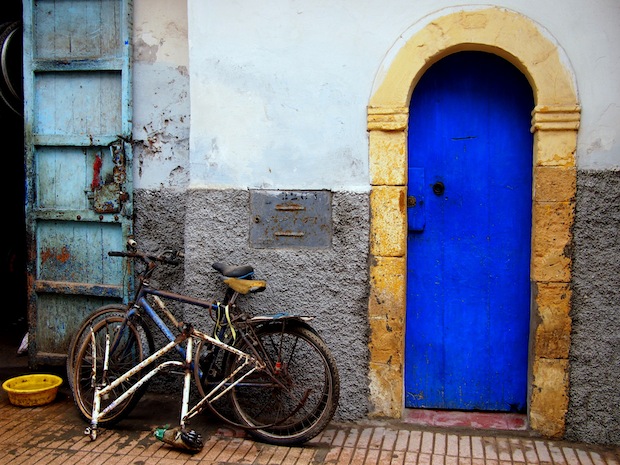 A doorway in the old media of Essaouira 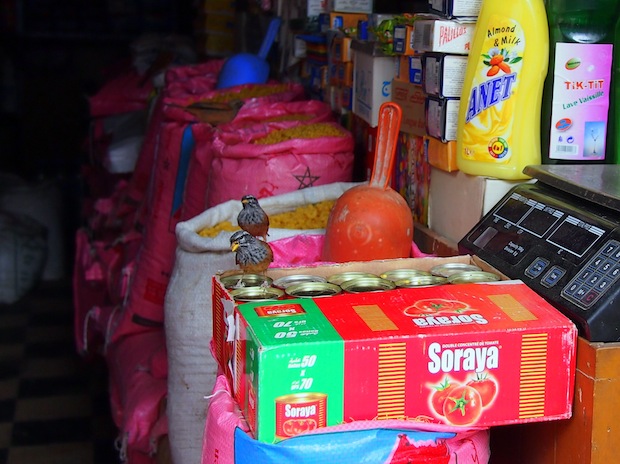 Tiny birds in a bright shop. 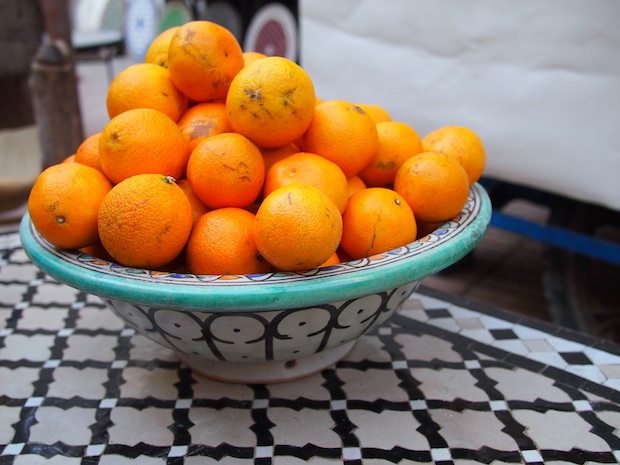 Fresh orange juice in the middle of the medina. 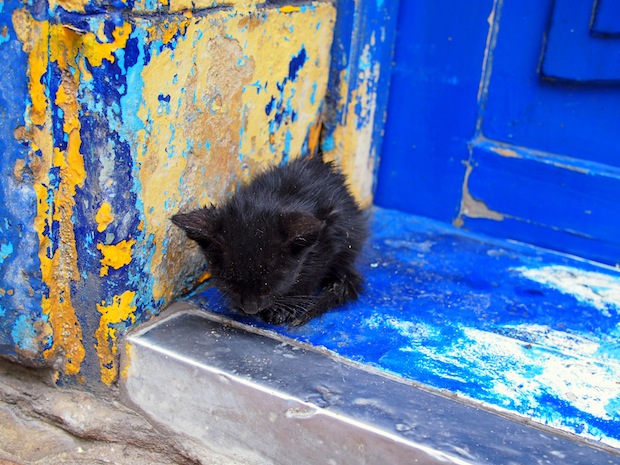 Tiny kitten in an Essaouira doorway. 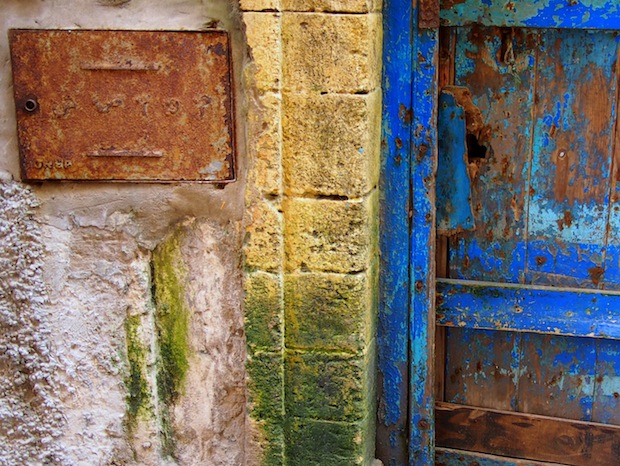 Old doorways, a study of colour and contrast. 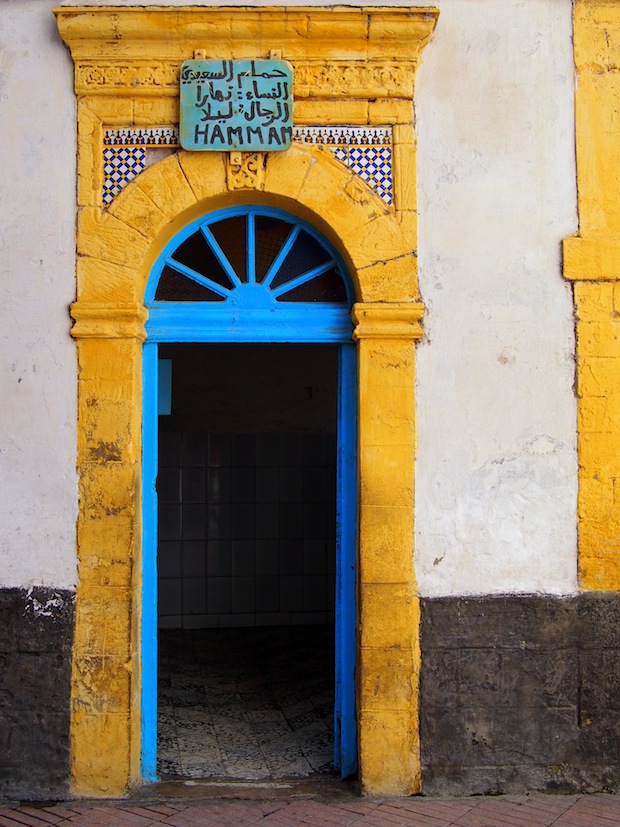 An hour in, I walked into a Frenchman by accident. Turned against the sun, I was trying to photograph the old, faded doorway above and spinning around to continue on my walk, I smacked straight into his torso. Brief hellos turned into a historical account of our respective lives, and an invitation to his wife’s restaurant. It turns out that he came to Morocco on vacation in the late 1980s, only to fall in love with a chef near his hotel. After returning to Montpellier to gather belongings, he came back to Morocco to woo the woman he knew ‘at first glance’ was the one for him.

He brought me through the twisted old city to his wife’s restaurant, introducing me to the staff. We sat and talked about life in Morocco and how Essaouira had changed since they arrived. Over tea, another small snapshot into a life so unlike mine: worries on one hand incredibly universal, but so foreign at the macro level. They pointed me back toward the main archways of the old city once we were done, and I emerged blinking in the long- forgotten afternoon sun, only to see this staring at me: 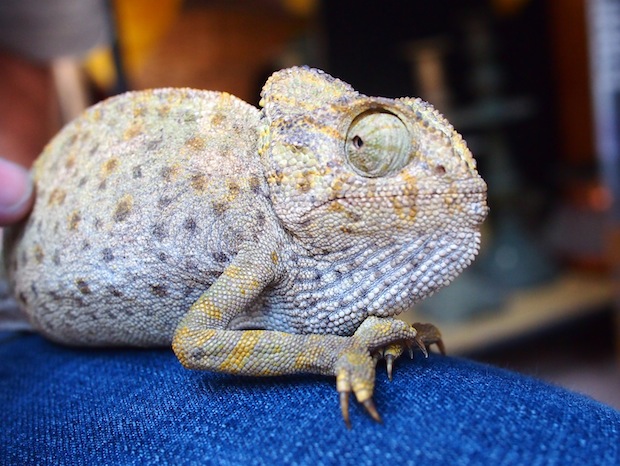 Nothing like a chameleon to punctuate two separate halves of your afternoon.

With the evening approaching, I met up with others in the group, sitting for a coffee and watching the light change. Part of what made Morocco so fascinating was the dual ability to feel completely outside my comfort zone on paper, but yet understand what people were saying. Being a French speaker added a very interesting angle to my travels in the country, since the day-to-day was wholly different but I could ask all the questions I wanted to, filling in between the usual lines of my assumptions. More importantly, it enabled me to learn about the people I met in the country, from the Frenchman above to the man who walked up to the donut bakery while I was sipping my late afternoon coffee, several dogs at his side. 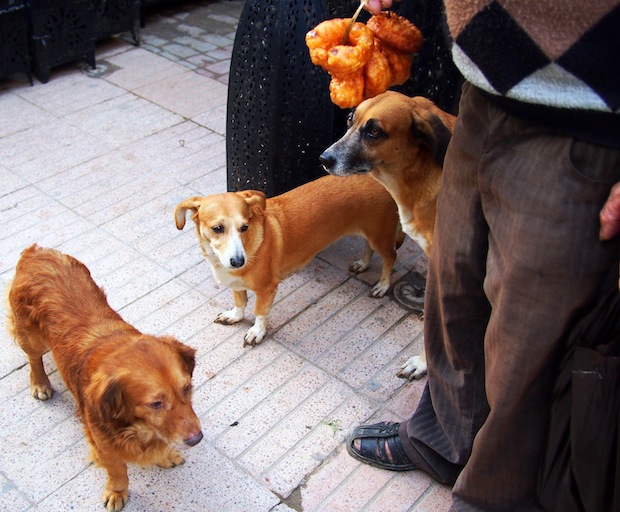 Waiting for donuts in Essaouira.

I crossed the street to see the dogs up close and learned that he was also from France, having settled twenty years prior when the town was a much sleepier place. “They love the donuts, they wait for me in the afternoon with their tails up high and eyes hopeful” he said with a smile. The afternoon donut run, a tradition he started with his wife, survived past her death.

And donuts in hand, dogs in tow, he left for the rest of his day. 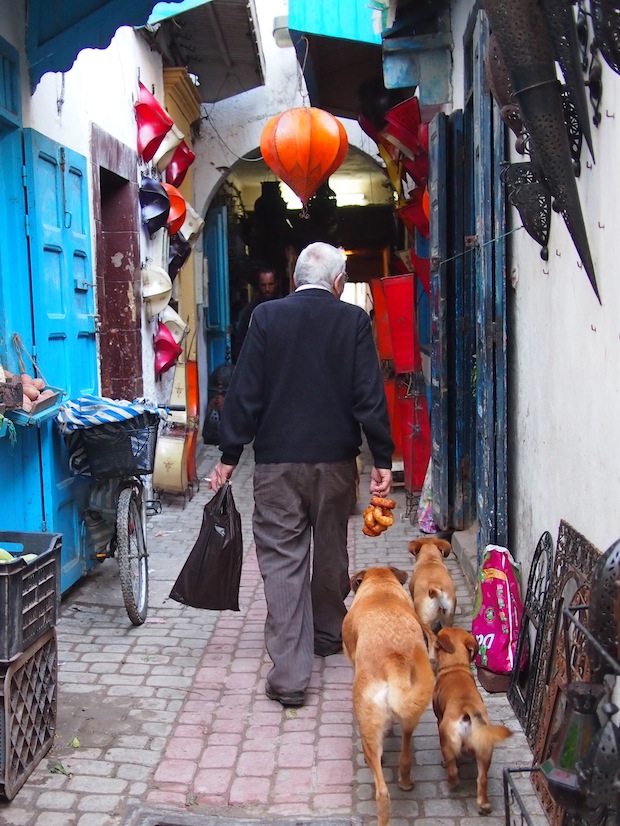 Donuts for the whole family.

Despite the fact that I found Essaouira’s touts to be the most aggressive of the country overall, coming up and trying to grab my scarf  to start conversation -“Can I see this? Where did you get it?” – my irritation melted away quickly when I left the main streets. While brief, my time in Essaouira was coloured by stories of love and loss, and what lingered wasn’t the touts but rather the bright doorways and dead ends in the quiet cubbyholes of the old city, where its best stories remain for safekeeping. 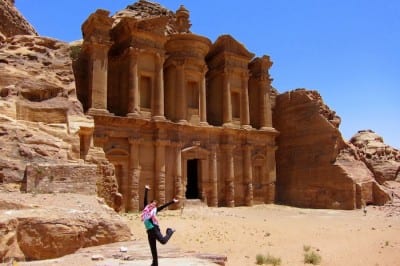 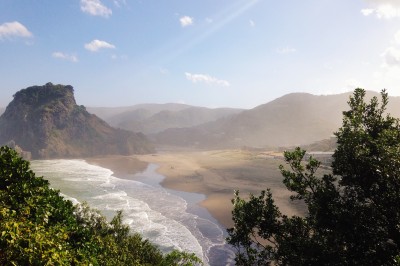