Ladies and gentlemen, this summer’s schedule has been kicking my ass. I only published one post thus far in August, and it was a hurried food roundup of New York. My mind is full of words and stories, but I’ve been moving around from meetings to presentations to more meetings. My words are now frozen half-scribbles scrawled on pieces of scrap paper, on backs of envelopes and — quite unfortunately — typed into cryptic iPhone notes that read something like this:

“Remember to write about that taxi driver.”

My first time in San Francisco

I’ve been in San Francisco for about three weeks now, and it is my first time exploring the city. In lieu of writing, I have neglected to stay still.

I’ve been able to get some great face time with companies I work with and get some speaking in (such as at the Apple store, yay!). Thanks to the extraordinary power of your own suggestions, I have also been stuffing my face. I’ve now got a giant spreadsheet of Jodi-friendly (read: not full of wheat) cheap eats to try from the many recommendations you sent me. As I said on the Facebook page, I will be sharing said spreadsheet at a later date here, since everyone should benefit from each other’s food recommendations.

And now for some updates.

As I’ve already announced, I’ll be starting up very casual food tours for readers. The aim was to have them based on where I am at a given point, so that I’m not tied to one destination but can instead host wherever I am, in places I love. First up is Vietnam in January. I’ve been building out the food site, which will house both tour dates as well as food resources, but it isn’t ready yet. However! For those who are interested in an email with the first tours and dates:

Here’s the logo of the new site, thanks to the help of Andre from La Fuite Autour du Monde and reader input:

Another version of the logo, thanks to a reader named John who thought he was HILARIOUS is: 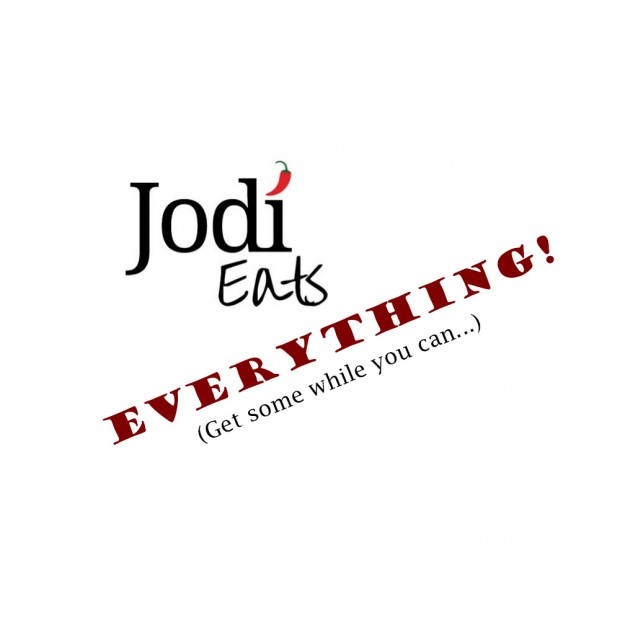 I can’t eat wheat, John. SO IT’S NOT EVERYTHING. (Yeah I thought it was pretty funny too. Fan art! You know you’ve made it when…)

One thing I love about having an engaged readership is that you all seem support my insanity with delicious frivolity of your own. And by this I mean: you send me photos of soup.

Lots of photos of soup.

At least once a week, I receive an email that says something along the lines of  “Oh hai Jodi! I was eating this soup and thought of you” with an attached photo of a steaming bowl of something. I should start a photo essay of reader soup photos, no?

In the absence of said photoessay, here’s a recent one from Mark in Australia. The email subject line was “Hi Jodi, do you like my photo of laksa soup?” and the email was this:

That’s all. No text, no context, just a photo of soup.

(Upon subsequent querying, I have learned that this soup is from The Red Chair Cafe in Subiaco, Perth, Western Australia. Aussies or visitors: get thee to the laksa! It looks good.)

Legal Nomads Around the Web

Some writeups, posts and podcasts from around the web. (For the posts around the web not about me, you can sign up for the Links I Loved newsletter on the sidebar. A sample, from August, is here.)

1. G Adventures asked each of their wanderers in residence to explain why we travel the way we do, and why we work with them. An excerpt from the post:

“However, April will mark my 6th year of travel and writing, and will be the first time that I can say “I’ve been traveling and eating soup for longer than I was a lawyer.” Had you told me when I left NY that I’d be doing this still, excited to wake up and learn about a new place through its food, I’d have laughed. Had you told me that I’d have written a book about it and was preparing to launch food tours for my readers…well, I’d have laughed even harder. But by sticking to the things I believed in, by following the sparks that ignited as I explored the world, I find myself here.”

We also recorded a 1-minute travel video of our most ridiculous travel story. Shockingly, I chose to mention all the birds that crap on my head. Video below, with the other wanderers’ videos here.

2. The New York Times’ Dan Salzstein wrote a long piece about the state of travel blogging today. I was thrilled to be quoted in it at length. Article is here.

3. Also in New York, I recorded a video interview with Bloomberg Law for their Stealth Lawyer series about how I went from lawyer to soup eater. Video is here.

4.  I had the pleasure of recording a very impromptu session of This Week in Travel’s podcast. Clockwise from left, Chris Christensen, Spud Hilton, Don George, David Lytle, Dick Jordan and Jen Leo. Full podcast is here.

That’s it for now! I’ll be leaving San Francisco in a few days and then heading back to Montreal (my crash course to Montreal is here) and then to India. More soon about SF eats and Vietnamese pho (not necessarily in that order).

35 thoughts on “August in San Francisco”