A corollary to having a brother who flies to the Philippines solely to help you find your favourite animal on earth is that he can be relied upon to provide you with friends who you will immediately adopt as your own. I tend to plan nothing for New Year’s Eve, viewing it as one of the more overrated holidays out there. My brother knows this, which is why the moment I got to England, I was unceremoniously informed that I would not be allowed to pull my “usual boringness” on December 31. Instead, we would be driving to Scotland with a few of his friends, whether I liked it or not.

It was going to be epic, he insisted.

And you know what? It was. 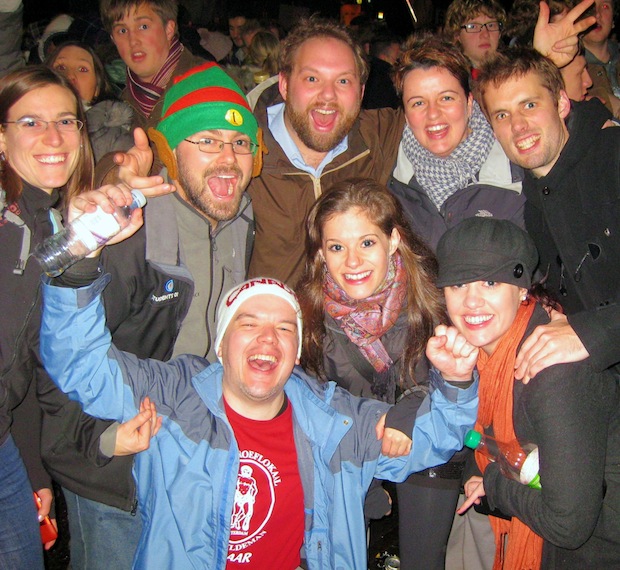 Joined by my Australian friends Andrew and Elysia, there were 8 of us in total split into two cars. The Australians drove from London, my brother and his girlfriend and I and our friend Micah from the Cotswolds and his friends Tanya and John, originally from Newfoundland, came in by train to Edinburgh. We immediately dubbed ourself Team Commonwealth, and thanks to Micah’s spelunking for a place to stay, ended up at a giant flat on East Mayfield street, within walking distance to the festivities.

The drive there was dreary, but being a car of people thirsty to learn, we entertained ourselves by reading out the Wikipedia entries for the towns we passed and the memorials we saw along the way. Extra points were given for those who could read in a satisfactory Scottish accent. 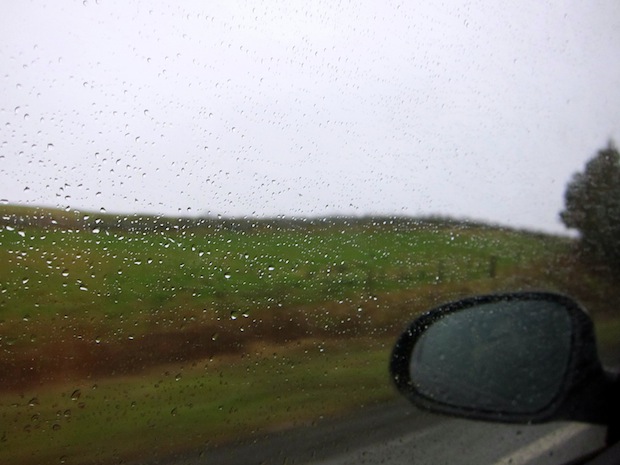 Due to some mishaps with directions and/or gridlock traffic (depending on which car you were in – the train people just laughed because they were off drinking in the Highlands on a whisky tour whilst we were suffering), we ended up arriving quite late on the 30th.

Before the festivities began on the 31st, we decided to walk up Arthur’s Seat – conveniently within walking distance of our flat. As with the rock upon which Edinburgh Castle is built, the “seat” was formed by an old volcano, pushed out of the way by a glacier that crawled across Scotland. In the glacier’s path, rocky crags and valleys appeared, which gives Edinburgh its fascinatingly wave-like topology.  (For an interesting take on Edinburgh, see also the Sensory Maps of the city, created to paper smells, tastes and touches). We lucked out – while I almost blew off the summit because of how windy it was, we weren’t rained out and were able to see the city and the water stretching out before us. 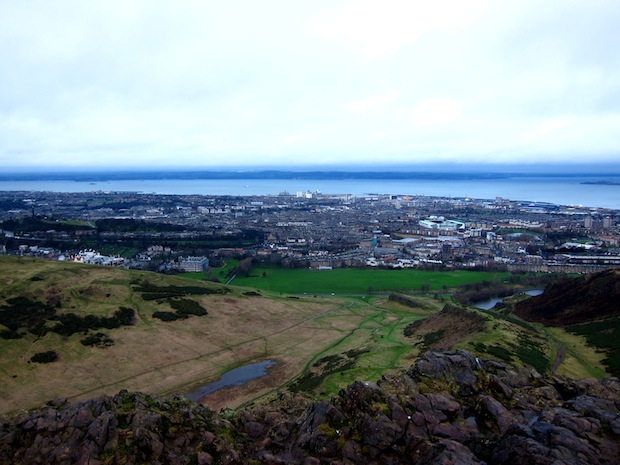 View from atop Arthur’s Seat in Edinburgh

And practice our jumping shots: 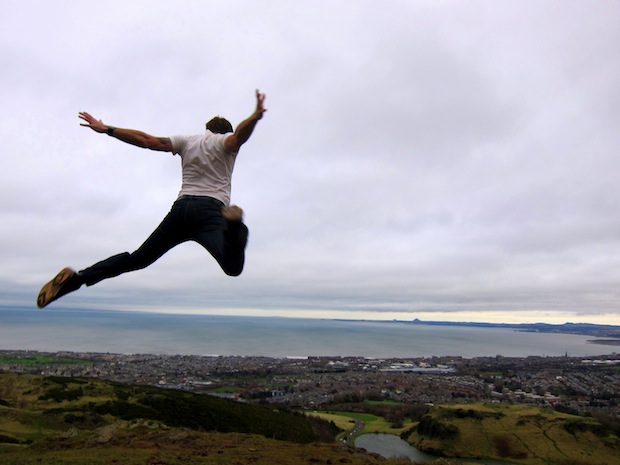 And take photos while trying not to topple off the rock. (I’m not exaggerating either. I spent a good part of my time at the summit crouched low and trying not to fall on my face.) 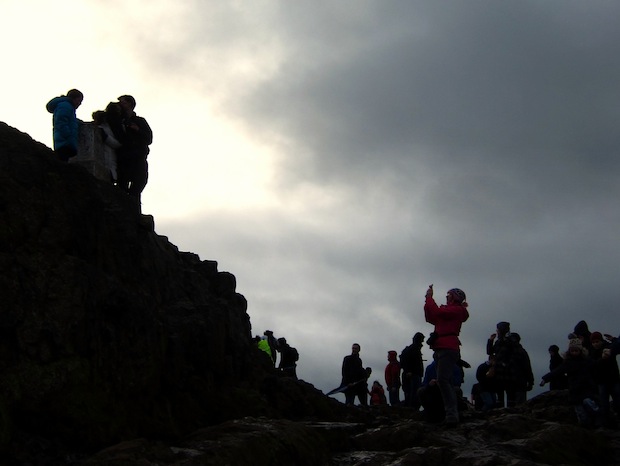 On the walk back, we stopped at St. Anthony’s Chapel. Built in the 1100s, it fell into disuse and disrepair after the Reformation in the 1590s. It paints a pretty picture against the backdrop of the city: 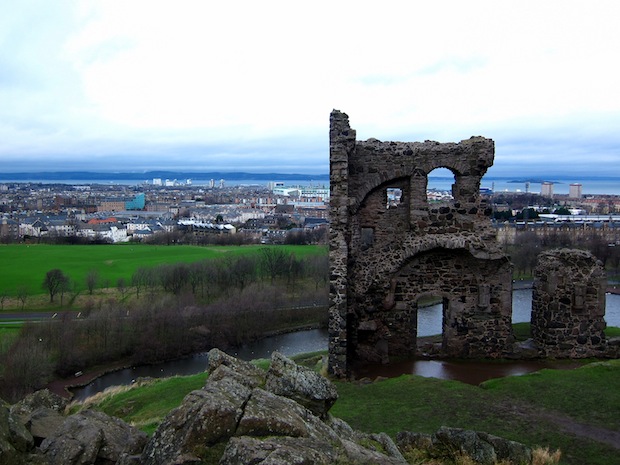 The ruins of St. Anthony’s Chapel on Arthur’s Seat

Happily we did the hike upon arrival because we’d have never managed to do so on New Year’s Day after the night we had.

A Bit about Hogmanay

First, however, there was the matter of Hogmanay itself and where it came from. Wikipedia seemed confused noting that “the roots of Hogmanay perhaps reach back to the celebration of the winter solstice among the Norse,” then suggest it could have also been Gaelic and perhaps the name was French in origin too? Googling other sources provided us with little others consistent etymology, so we put away our computers and took out a bottle of wine instead.  The evening began at home, with leftover Christmas turkey sandwiches (yes, we froze Hester after Christmas, we didn’t just let her grow new mouldy turkey) and generous servings of the aforementioned wine. With some for the road, poured into apple juice bottles. 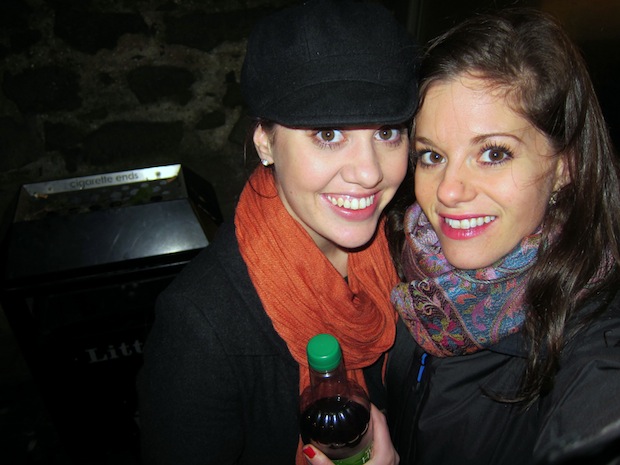 Elysia and me at Hogmanay, with our portable wine bottle.

A late bus to the festivities, which were spread out on both sides of the Golden Mile and fanning out around the downtown core. It was packed, but astonishingly well organized: self-use computers were set up to pick up tickets bought for the street party, portable toilets at every entrance-way to the grounds, police stationed everywhere and swift bag checks upon arrival. Efficient, easy and simple to start enjoying the eve.

We wandered from stage to stage at the street party, forming a Commonwealth train so we didn’t lose anyone from the group (and taking out a few people in the process – whoops). My brother, the fireworks aficionado, placed us perfectly to watch the show at midnight, whereupon the entire mass of thousands broke into an off-key rendition of Auld Lang Syne. 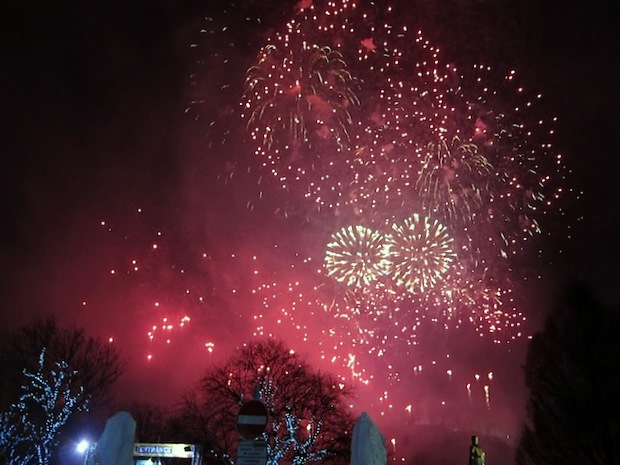 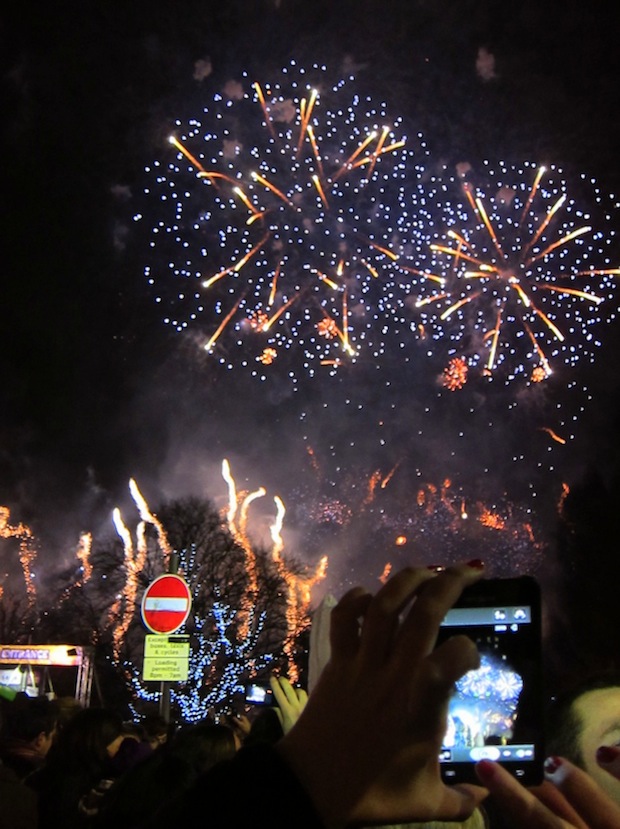 The crowd watching the fireworks show: 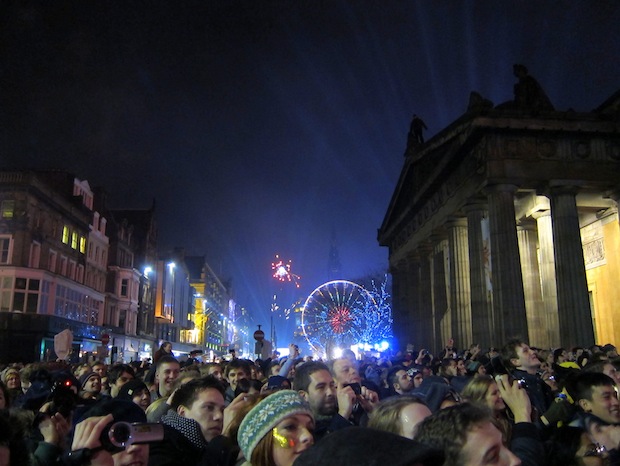 Of course, it wasn’t all fun and games. Some moments were actually…quite serious. 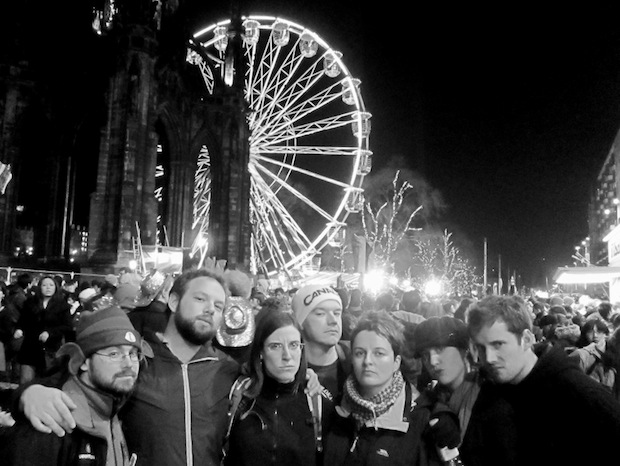 Ah, who am I kidding. I needed several takes of this photo because they wouldn’t stop laughing.

While half the group went off in search of toilets, I climbed up on my brother’s shoulders to see the crowds. A very (very) rough video, made rougher by the fact that (1) my brother thought it was funny to whirl me around and (2) it ends with my almost falling off his shoulders:

I did get myself into a bit of a talking-to when I decided no Hogmanay was complete without lifting a kilt or two, which didn’t actually count as the two gentlemen below were actually French and not Scottish. What a waste of kilt-lifting. Still, they cheered up considerably when I switched to French and explained that I was just doing my duty, after which Team Commonwealth duly nodded and resolutely stated the same. The Frenchmen soon chased after a none-too-sober Scottish lass and all was well with the world once again. 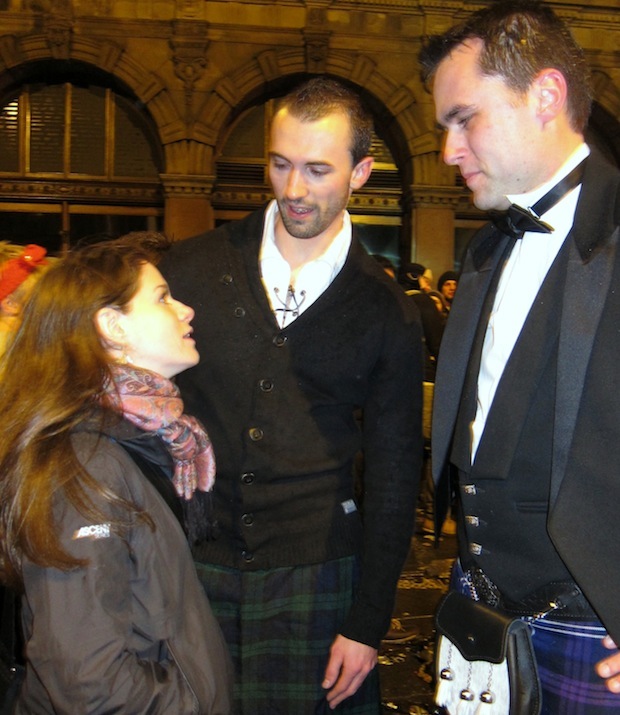 The drive home was as educational as the drive there, stopping off at Hadrian’s wall and reading all about it courtesy of Wikipedia again, since the Discovery Center was closed. 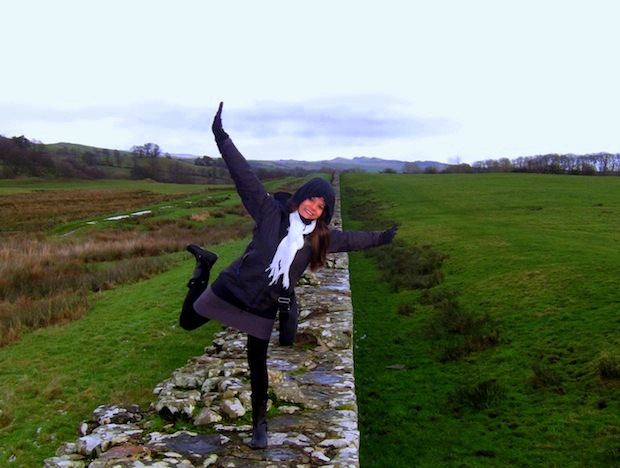 Gleeful on Hadrian’s wall on the drive home

We also stopped at a gorgeous priory dating from the 1100s for a quick bite to eat, some coffee and and wander around the old Church grounds: 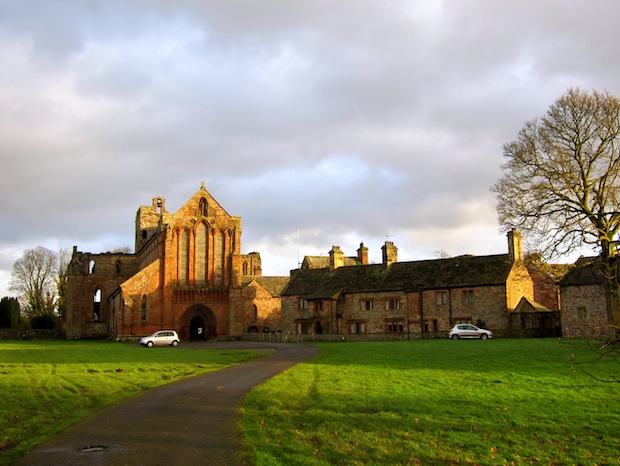 The drive back was close to 10 hours total, but we all found it worthwhile – the pits stops and the beautiful afternoon light was a perfect end to a raucous trip. 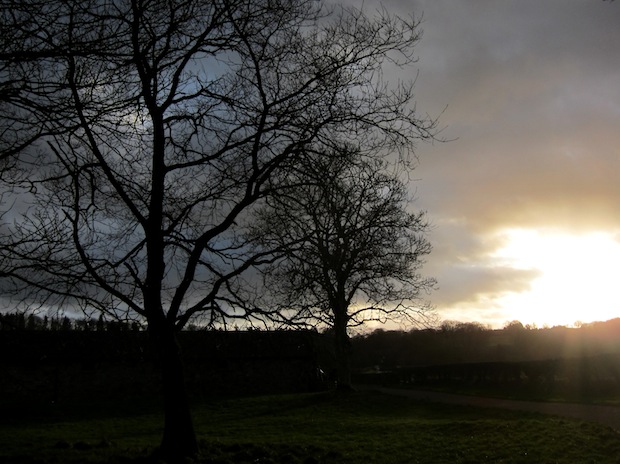 A glimpse of sun to end the trip.

For someone who does nothing for New Year’s, these festivities turned out to defy all expectations.  And a holiday season with my brother and friends was the best way I could think of to ring in a new year.

Happy new year to each and every one of you! May 2012 bring you many wide-eyed adventures, inner peace and – of course – delicious meals shared with friends.