Why Are There So Many Cats in Istanbul?

In my last photoessay on Turkey’s biggest city, I wistfully recalled my many hours of wandering the cobblestone streets of Istanbul, my camera and imagination in tow.  Everywhere I walked, there were cats. After weeks in the city I wanted to know: why are there so many cats in Istanbul?

I do seem to be perpetually followed by cats. In Muang Ngoi, Laos, I would sit down to read and within minutes, a cat would squeeze between book and knees. Daily, I’d wander to town for dinner and sit on a mat for some food. Seconds later, a feline (sometimes two) would push their way onto my lap, purring furiously. Wandering through Amman, I found myself stooping down to pet scraggly-looking cats, each materializing when I would stop to gather my bearings.

So when I got to Turkey, I wondered just how many cats I’d be hugging during my time in town.

True to form, in Istanbul, my cat-magnetism (catnetism?) reached higher levels. I’d walk outside my guesthouse and two cats would creep up, one on each side. The staff at my guesthouse asked jokingly if I bathed in fish oil.

Their suspicions deepened when I returned to my room after a day of wandering to find a cat sitting contentedly in my shower.

The cat-following was out of control.

It was a veritable cat factory, this city. Looking out my window, a green tarp was constantly covered in felines. No matter how many times I checked outside, a different set of cats (two, or three or more) would be gazing back at me, as if to say “what did you expect? We’re just hanging out.”

The truth is, of course, that there are many cats Turkey and Istanbul was awash in cats also. Many were well-fed and clean, and  almost all were affectionate. To be sure, the cats slimmed down and dirtied-up when I walked outside the busier zones of the city into the immigrant areas – parts of Fatih, for example. In those laundry-strewn, narrow streets the cats were more feral, more hungry and certainly less curious.

But one constant remained: there were cats everywhere.

No, Seriously: Why Are There So Many Cats in Istanbul?

The New York Times estimates that in Istanbul alone, a megacity of 15 million people, there are thought to be 130,000 dogs and 125,000 cats roaming free.

Why so many cats? Per a 2017 article in The Economist:

Turkey is not unique among predominately Muslim countries for honouring its cats, which are considered ritually clean animals in Islam. In the hadith, the collected sayings and actions of Muhammad, there are numerous examples of the Prophet’s fondness for cats. By one account, Muhammad cut off his sleeve when he had to rise for prayers so as to not disturb a feline that had curled up on his robe for a nap. In another tale, the pet cat of Abu Hurayrah (literally “father of the kitten”) saved Muhammad from an attack by a deadly serpent. Muhammad purportedly blessed the cat in gratitude, giving cats the ability to always land on their feet. Cats were considered guardians in other respects for the Islamic world: they defended libraries from destruction by mice and may have helped protect city populations from rat-borne plagues.

Looking through history books about Islam, many mention the prophet’s love of felines and while variations on the foregoing stories exist, the overarching affection for cats has been consistent.

At the beginning of the introduction to Lorraine Chittock’s photography book Cats of Cairo, Annemarie Schimmel notes:

“When the British orientalist E. W. Lane lived in Cairo in the 1830′s, he was quite amazed to see, every afternoon, a great number of cats gathering in the garden of the High Court, where people would bring baskets full of food for them. He was told that in this way, the qadi (judge) fulfilled obligations dating back to the 13th-century rule of the Mamluk sultan al-Zahir Baybars. That cat-loving monarch had endowed a “cats’ garden” where the cats of Cairo would find everything they needed and liked. In the course of time, the place had been sold and resold, changed and rebuilt; yet the law required that the Sultan’s endowment should be honoured, and who better than the qadi to carry out the King’s will and take care of the cats?”

Indeed, a popular saying notes “If you kill a cat, you need to build a mosque to be forgiven by God.” Wandering the streets of Istanbul you will see many small containers by the sides of buildings, and discreet food rations doled out by its inhabitants. While the cats are not adopted formally, they are taken care of by no one and everyone, a giant community network of cat caring. Even the World Basketball championships boasted a feline mascot, a blue-and-green eyed “Bascat” after the long-haired Turkish Van.

And the popularity of the cats in Istanbul has not gone unnoticed by those on social media. Someone started a Hagia Sofia Cat account on Instagram, among many others. It now has 106,000 followers.

Unlike elsewhere in my travels, no one glared at me if I tried to feed then. I was the recipient of a big talking-to by a restaurant owner in Morocco; my feeding the strays would merely ensure that they returned time and time again. In contrast, when I went for chicken wings and couldn’t finish my plate, I tried to surreptitiously slip the cat underneath my chair a morsel of food. Seeing my furtiveness, the owner walked over and, a smile on his face, dropped the cat below a full drumstick to enjoy.

Not all Idyllic for Felines in Turkey

Of course, it’s not a purely idyllic life for the animals of Istanbul.

As I already mentioned, walking the poorer parts of town will open your eyes to the less fortunate of  Istanbul’s strays. Catfights in the dead of night are quite common and there are problems with the sheer volume of the strays in town (unless they are spayed they will, of course, beget more cats). Furthermore, until 2004 there was no formal animal welfare law in place, and even with the current law (Animal Welfare Act No. 5199) offenders are only subject to fines.

And as this article about dogs in Istanbul notes, canines are treated with much less affection and care, although that is starting to change. An October 2019 article from the New York Times quotes an Istanbul dentist who notes that municipalities around Turkey poisoned dogs in the late ’90s and early 2000s. According to the article, things changed because the killings of dogs finally provoked demonstrations and public pressure, assisted by the rise of access to the internet, in the late 1990s and early 2000s.

In positive news, however, Turkey introduced a new law that would make it a crime punishable by jail time to mistreat, torture or leave animals without food or water. The law is in its infancy right now, but those interested in supporting it can go and sign this online petition. It will be interesting to see how, if passed, the rule will be enforced.

A 2017  documentary about cats in Istanbul, Kedi, also helped showcase a day in the life of a cat in the city and raise awareness for the street animals in town. While the film features lovely cinematography and copious cat scenes, it also ends somberly, warning that modernization of Istanbul is pushing out both people and cats as the city expands. Here’s a great writeup from the Paris Review called The Alleycats of Istanbul, both about the film and our love of animals.

Additionally, lots of viral videos of animals in Turkey have helped get their plight out into the world: a tram stopping to wait for a stray cat to finish drinking water from the ground, a shopping mall letting dogs sleep inside, wrapped in blankets, during a snowstorm, an imam petting cats in a mosque, and my favourite, a cat at the top of an escalator refusing to move despite being in the way.  There are even statues of street animals in some cities.

Per the New York Times piece, animal welfare has become a political issue:

“The issue became so popular, now politicians cannot afford to alienate animal lovers any more,” he said. “Normally, they never agree on anything else, but they were all on the same page about the street animals. This must be a historic moment.”

As for my trip, I met, petted and cuddled with many a cat during my weeks in Istanbul. As a celiac, I can’t eat wheat flour and breads in Turkey (and thus kepab sandwiches and shwarma sandwiches) were off limits. But the platters of meat were giant-sized and I couldn’t finish them off. Trying to communicate my allergy was laughably impossible, so I would instead order the sandwich, grab a fork – to the confusion of the restaurant’s staff – and eat only the meat and vegetables. But what to do with the meat-soaked bread? Why, give it to the cats, of course!

…to adorable kittens in boxes around town, the history of Istanbul is not complete without considering a feline presence and they are firmly wrapped up in my memories of the city.

As my guesthouse noted when I departed last month “we look forward to welcoming you back to Istanbul – and the cats will too.”

If you’re heading to Istanbul, this 2019 guide from Roads and Kingdoms is a great place to start, and then follow it up with a stomach-grumbling list of top foods to eat in town from Migrationology.

And for more cat pictures from what the Daily Sabah calls “Catsanbul,” see their long feline photoessay here.

Don’t worry, dog lovers: there’s a dogs in Istanbul documentary for you too.

Dowoof, a London-based, documentary film company that has won Oscars and BAFTAs has released a trailer for its 2021 documentary about stray dogs in Istanbul, titled Stray. The film appears to dovetail with Kedi, and features three dogs – Zeytin, Nazar, and Kartal – as they roam in search of food and shelter. Per the film’s landing page, “Stray seeks to shed light on Turkey’s societal convulsions through the observations of Zeytin and her companions —both human and nonhuman.” Directed by Elizabeth Lo.

The trailer for Stray is below, and you can find more info on the Stray website, or Instagram.


-Jodi
Addendum: Since the post has gone up, I’ve received emails from Turks thanking me for the explanation, and others telling me it’s all creative thinking and not accurate. While I did research the the post and the Economist (I assume) fact-checked their article too, I wanted to excerpt from one of the emails for the opposing view:

Some of my colleagues do not hesitate to tell such city legends or stories about cats-in this case- which helps this misconception to grow further. Please do not forget that Istanbul has the most religious population only for the last 30-40 years. Never before was such as dense distribution. Just remember the Rums, Greeks, Armenians, all other minorities, they all loved and fed cats along with us. If you have been to Athens, you will be surprised to see so much dogs and cats on the streets. As I personally lived in Italy for a considerable time, I may say that all the missing cats in “centro” would meet you as you go to suburbs and small villages. 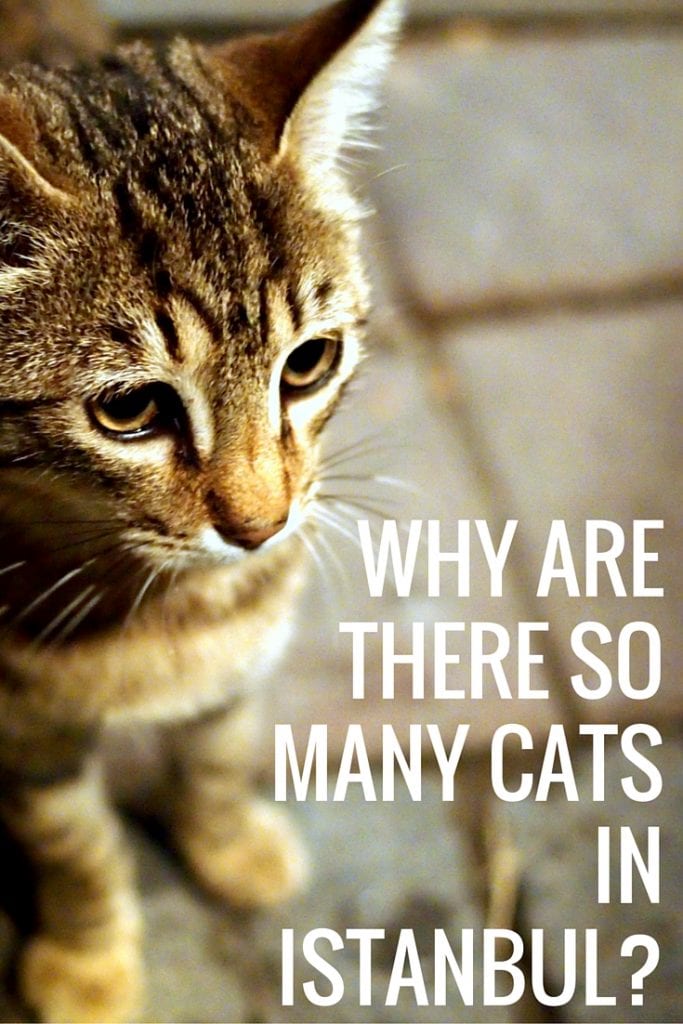 Share on TwitterShare on FacebookShare on PinterestShare on LinkedInShare on Email

148 thoughts on “Why Are There So Many Cats in Istanbul?”