While wedged between a 7-year old vomiting into a plastic bag and a bamboo cage full of irate chickens, it occurred to me that I should devote more time to the glory of public transportation in Asia. I do have a whole tag devoted to Adventures in Transportation, but in the last months I have focused on other aspects of my travels – photography, lessons learned and some good food. But I’m a big believer in taking as much public transportation as possible, as these journeys are the most effective snapshots of a local culture, a Polaroid puzzle piece to help fill in the blanks. Granted, an in-depth exploration of the local market or an impromptu invite to a wedding or a funeral are other excellent ways to immerse in a new place.

But there is something about a local boat or bus – with all its discomfort, livestock and laughs – that affords a unique snippet of a different life, no matter where I am. From the moment I got to Chiang Mai earlier in the year and piled onto the back of a friend’s motorbike, I had a big smile on my face. And in the weeks that followed – stuffed into songthaews with piles of schoolchildren, a dizzying array of snacks and a monk or two, or hanging off the end of a pickup truck for a quick ride to Hang Dong or riding my own awesome pink Scoopy bike – I’ve reminded myself how integral the ‘getting there’ part of travel is to the overall travel experience.

During my recent trip to Laos, all of the ingredients for a memorable ride were present: the crotchety driver who I slowly won over with clementines and silly jokes, the piles of luggage atop the songthaew that trundled across Northern Laos (packed to the gills), the irate chickens next to me and – half way through – a dozen giggling children wedging themselves into an already-overflowing truck, dirt-covered and smiling.

My trusty songthaew from Luang Prabang to Nong Khiaw

The ride started normally: it left over an hour late, and all of the passengers had already shared some food with one another by the time the songthaew pulled away from Luang Prabang’s Northern terminal in a cloud of dust. I had a bag of clementines on offer, the woman next to me was intent on feeding me as much sticky rice as possible and the man across from her kept trying to ply me with fried chicken.

Only thirty minutes in, we had already picked up enough people and cargo that kids were sitting on their parents’ laps and burlap sacks filled with unidentifiable meat were unceremoniously shoved under the benches near my feet. Cardboard boxes filled with nails lined the middle of the songthaew, creating a makeshift ‘centre aisle’ for the lightest of the passengers (nails in your butt: probably not the best way to travel through Laos). 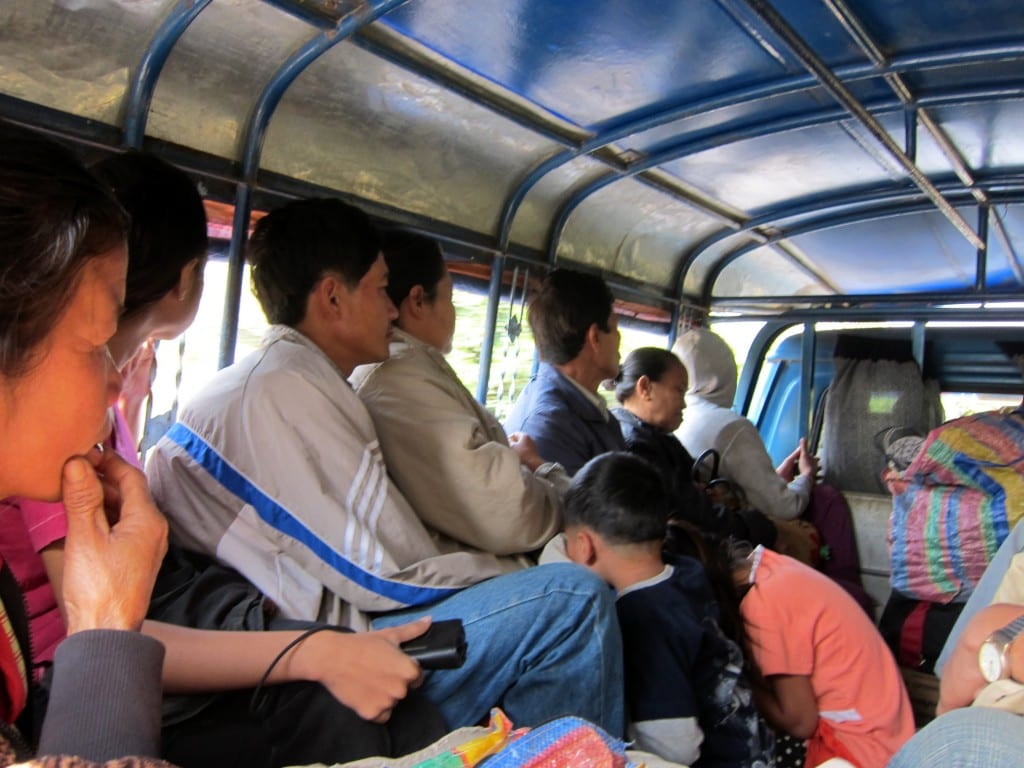 One hour in, and there were people hanging off the back of the struck, sweaters flapping in the wind. Mobile phones kept going off, but no one could answer – either they were too wedged in their seats, or they were holding on for dear life.  Of course, half the songthaew was fast asleep at this point; the Asian ability to sleep wherever, whenever remains mind-blowing.

Two hours in, we stopped for a ragged band of children and their exhausted mother, the kids caked in dirt and barefoot, curiosity bubbling under the surface of their tiny faces. As they started to pile into the songthaew, the driver yelled at them to get out, only to change his mind several meters down the road. In they went, piles of kids upon kids, chickens upon chickens, smiles all around. 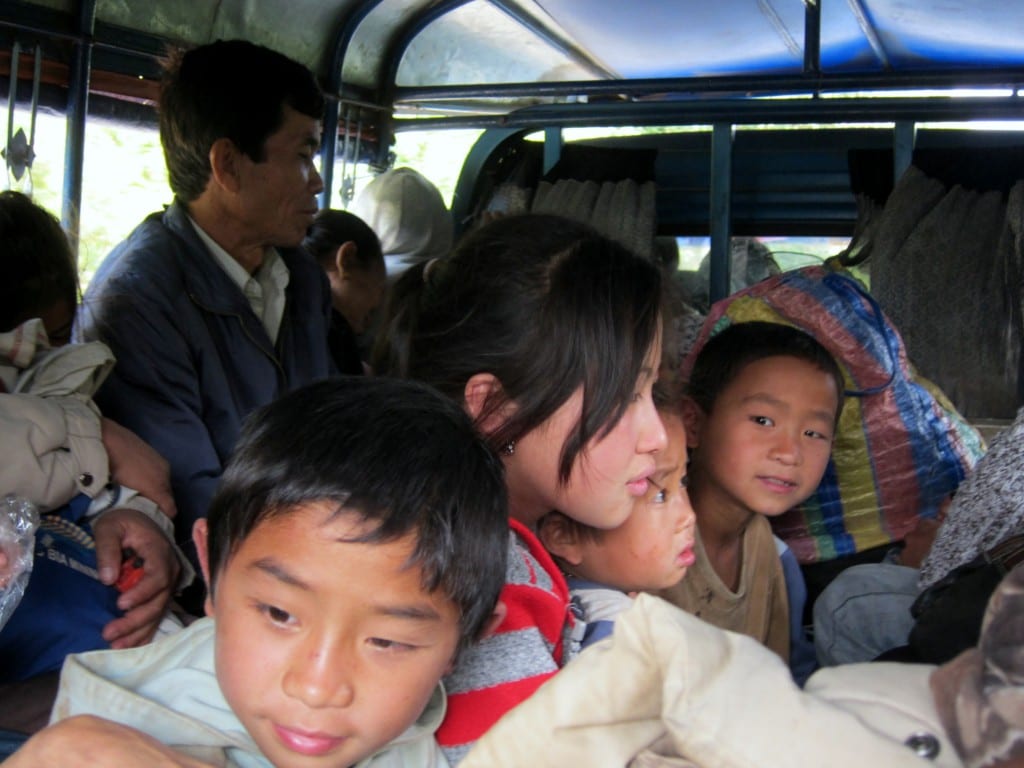 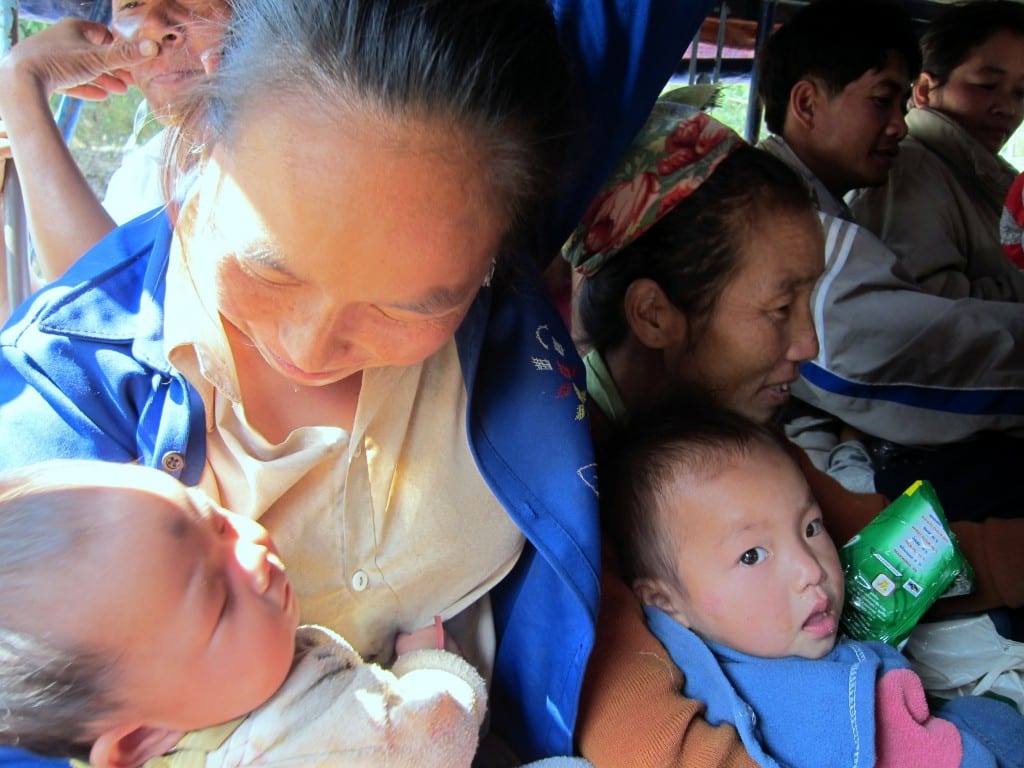 All ages and sizes in my songthaew.

The kid nearest to the front (who couldn’t see the road) began to throw up loudly, and – a testament to the gaping cultural chasm between North America and Asia – with each round of vomit, everyone in the songthaew cheered, applauded and laughed at his predicament. It was entirely good-natured, but still surprising to me; I can’t imagine the gentle mocking going over smoothly at home. This barf-and-clap routine went on for quite some time, and the chorus of other children vomiting added to the fun. Including, as I mentioned from the outset, the kid perched at the edge of my lap. 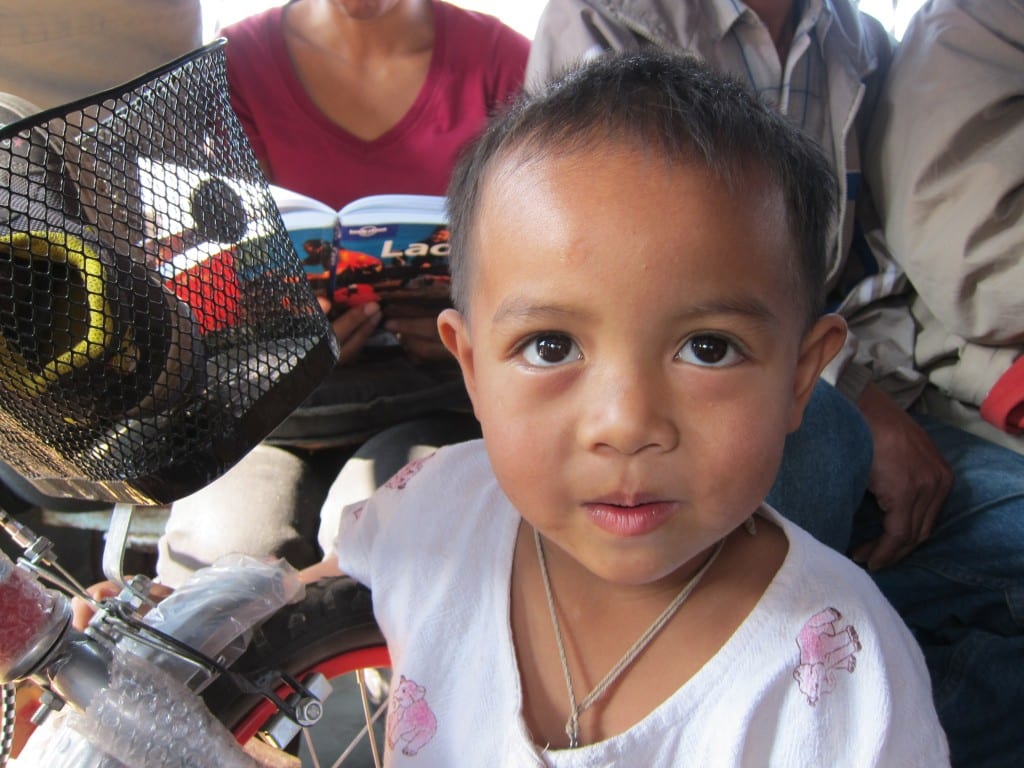 One of the few kids who wasn’t throwing up on the ride. 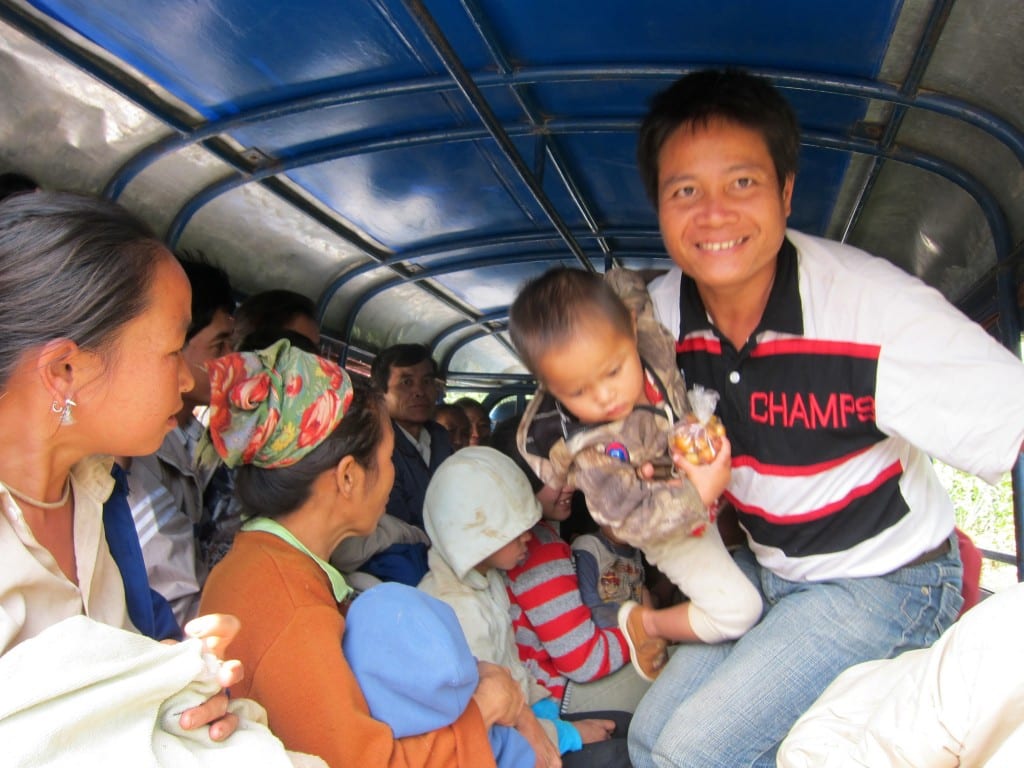 This baby ended up on my hip about 2 seconds after I took the photo.

Two and a half hours in, a couple banged on the roof to get the driver to stop. Since I was sitting near the back, I stepped out first and while I was stretching my legs, they literally threw their baby at me. Standing outside, a small Laotian boy on my hip and a clementine in my hand I took a look around me. In the chaos of the trip, I forgot to focus on what was outside the songthaew – and it was glorious.

Careening past towering karst cliffs, past the emerald green river snaking between them, across bridges with incomparable vistas, we (me and the 37 other people – yes, I counted) were catapulted into an alternate universe, away from the dust and dirt of Luang Prabang, away from the tourists and the touts. No matter how long I travel, mountains and rivers take my breath away. 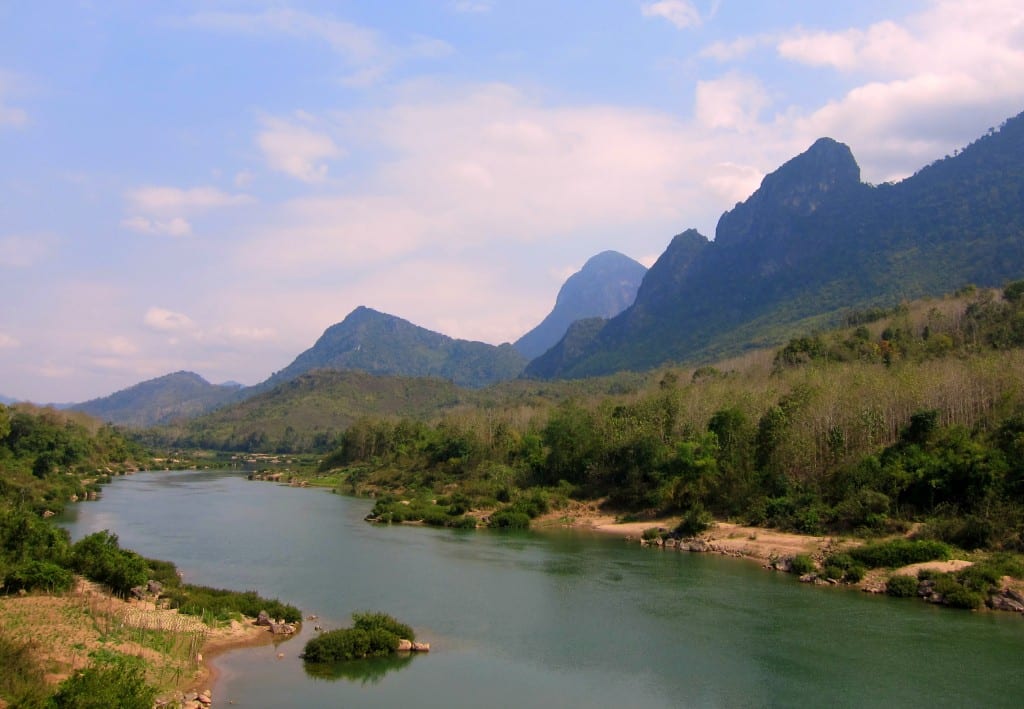 Beautiful view on the way to Nong Khiaw. 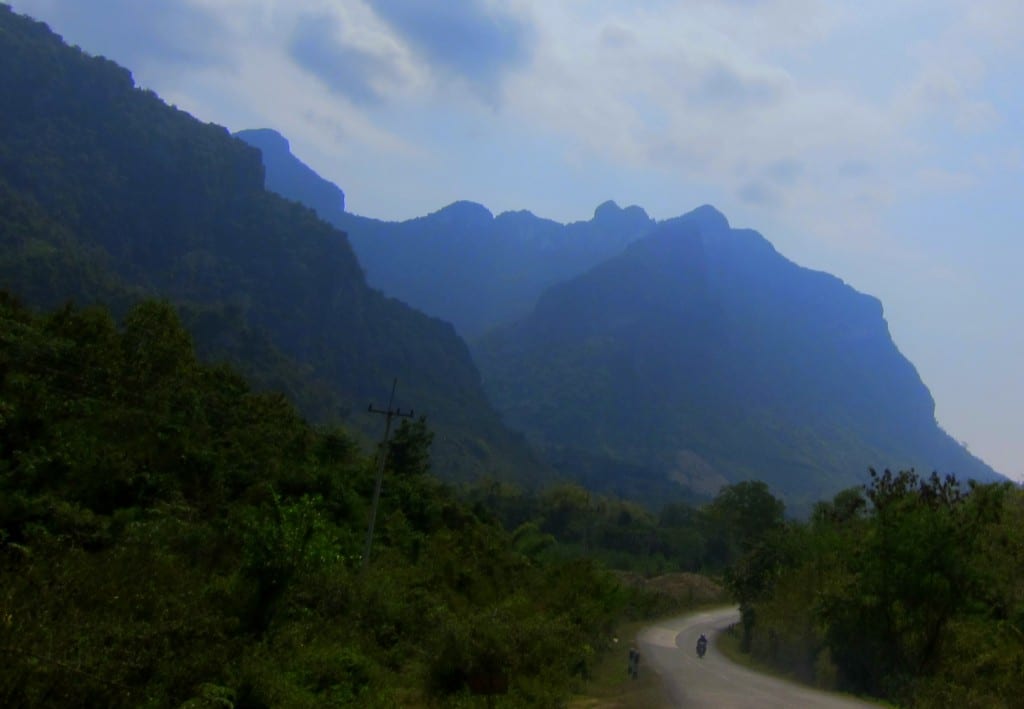 At around the three hour mark, the kids struggled to stand up and started banging on the roof. Our songthaew braked sharply and out went the kids, giggling and smiling and holding their respective bags of vomit. After their collective dismount, we began to pull away. The mother gazed casually into the distance, bored, as she waited for her kids to stop throwing up at the side of the road. Stiff, straight back, tired but proud look in her eyes and a baby on her hip. And that is how I will remember them, a small snapshot of a life that I will never know and a special perspective that only local transportation can bring.

Arriving in Nong Khiaw was rewarding: a tiny town wedged between limestone cliffs.

But the ride to get there? Even more memorable. 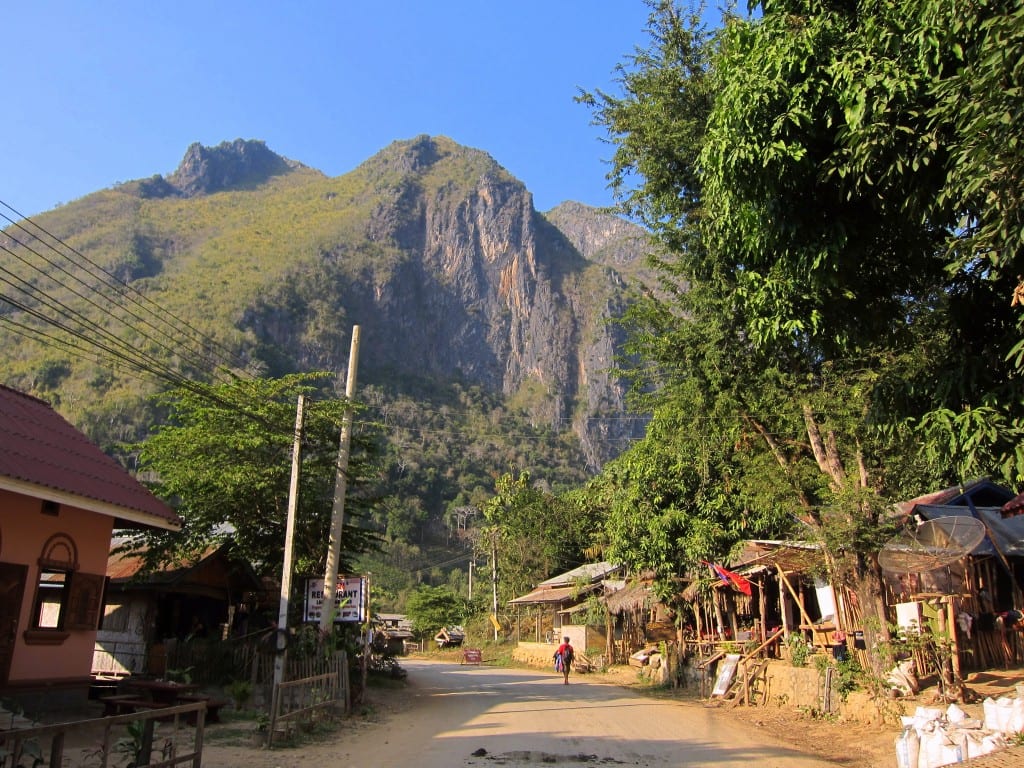 Nong Khiaw in the afternoon sun.

It’s just not a proper bus ride without a chicken or two. 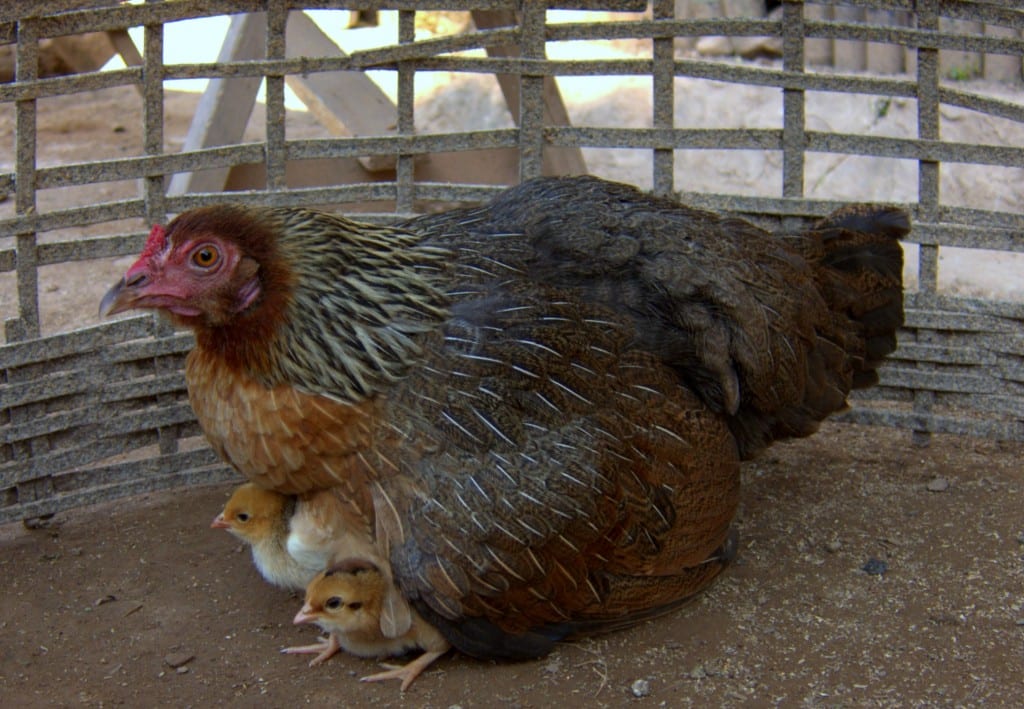