I’m not sure what I expected to find in Montevideo, with barely enough time to inhale the Rio de la Plata at La Rambla’s edge before being whisked away again. Truthfully, in the chaos and nostalgia of my trip I hadn’t given it much thought, instead focusing on remembering my Spanish and eating as many tacos as possible. As a result, coming back to Montevideo seven years after my departure was a bit of a shock.

I came to the city in early 2003 to work at a nonprofit in sustainable development law. Struggling to protect the Esteros del Ibera, Argentina’s largest wetlands, the nonprofit had me working out of a small office in La Barra de Maldonado, some 2 km from the nearest grocery store. Adjacent to the glamour of Punta del Este but a world away in spirit, I arrived to find that my office had no doors and that I shared my room with poisonous spiders. The living room, with a yawning attic far above and bookshelves to peruse on every wall, was home to a staggering amount of wasps, who also carpeted the couch and chairs. Spiders lined the stairway to the top floor (meaning I rarely went up there) and the only other person in the house was a caretaker in her seventies named Luz, who spoke no English.

A year alone in France under my belt, I thought I would be prepared for this solo trip. But I was wrong, and moreover I was completely unnerved by the homesickness and the loneliness that kicked me deep in my gut. As an arachnophobe, I was also deprived of sleep for the first few long weeks of fear. Exhausted, I finally settled into a tenuous truce: if I knew where the spiders were before bed, I could manage to sleep a few hours at a time. (Looking back, I fail to see how I managed to do this; I’m shuddering just writing this out for my site.) I never knew lonely, and suddenly I was in the middle of nowhere with no knowledge of Spanish and a room full of animals who wanted to kill me.

And then, over a month in, I met a guy at the grocery store who knew a guy who had a cousin who had a friend with a room in Pocitos, and in the blink of an eye I was living in Montevideo. In one of those truly fantastic moments of fortuity, my laptop and I were transplanted from La Barra de Maldonado to the middle of a new, energetic and welcoming group of friends in Pocitos. 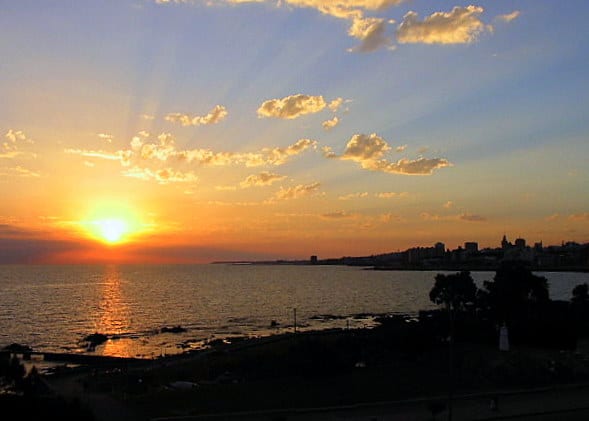 Sunset over Montevideo – photo from my album in 2003.

Those first months in Montevideo taught me about soccer, about the intricate politics between friends in Latin America, about cumbia and late night parilladas and dancing until the sun comes up. I learned how to swear so gloriously that I still make my Spanish-speaking friends blanch, the fruits of a night filled with wine and laughter and cross-cultural note-taking. And I learned a slogan I never forgot: “you can change your job, your house, your wife, your sexual orientation…but you can never change your fútbol team.” The city was in the middle of a financial crisis but it was lively and optimistic.

In contrast, the Montevideo I saw in 2010 appeared to be well on its way toward inexorable decay. Graffiti littered almost every building in the city centre, the facades crumbling, windows reflecting the empty streets. Compared to the city I had lived in and marveled at, it was jarring. In the outskirts – in Pocitos where I used to sit and watch the water lap against the shore, the stoop where we’d all watch the world go by – the streets were still busy. But the downtown core was eerily quiet, and it was unnerving. 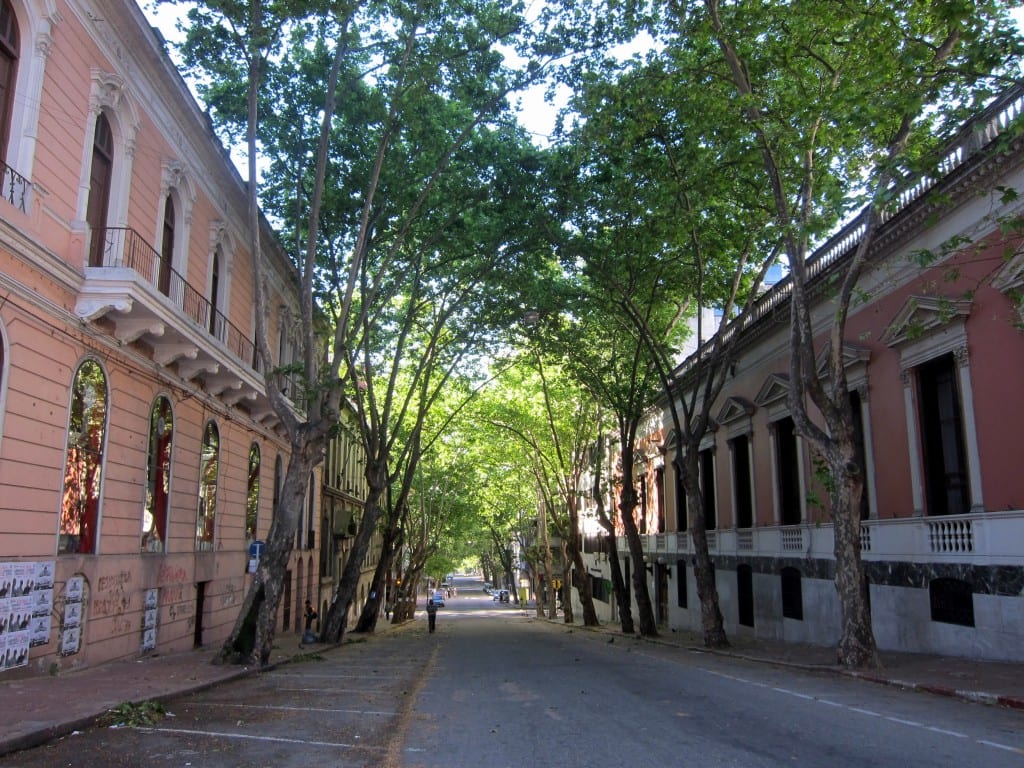 Montevideo, quiet in the afternoon.

Some of the friends I knew are elsewhere, working in New York or DC. Others still in Montevideo lamented the way the city was crumbling, an undeniable reminder that while jobs were not scarce, the city still had its problems. With the US dollar weaker than before and inflation high, the cost of food (especially fresh fruit) was amazingly high. A sandwich and coffee cost me more than in New York.

Walking through the empty streets, I stumbled upon this sign and it symbolized (to me, at least) the feeling in Montevideo these days: 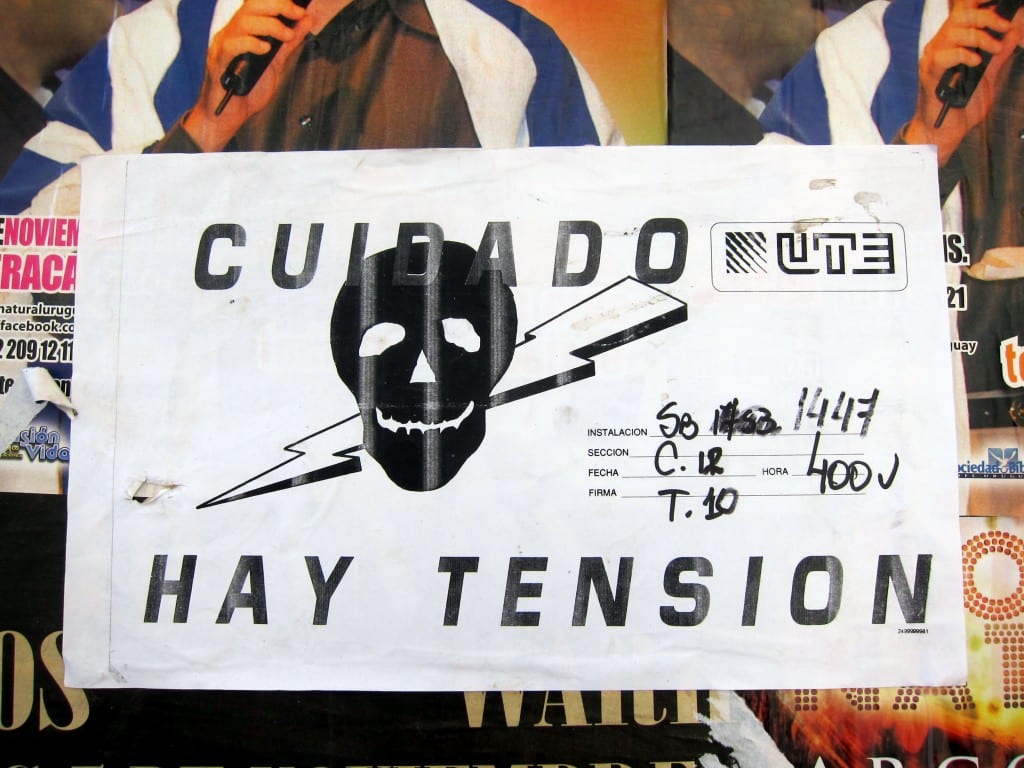 This is not to say the city felt in any way unsafe. It didn’t. But in contrast to the prevailing optimism of my prior visit, it was the tension and the decay that stood out. I didn’t go searching for pictures of corrosion or graffiti, but naturally these were the elements of present day Montevideo that caught my eye.

Here are some photos from my weekend in the city: 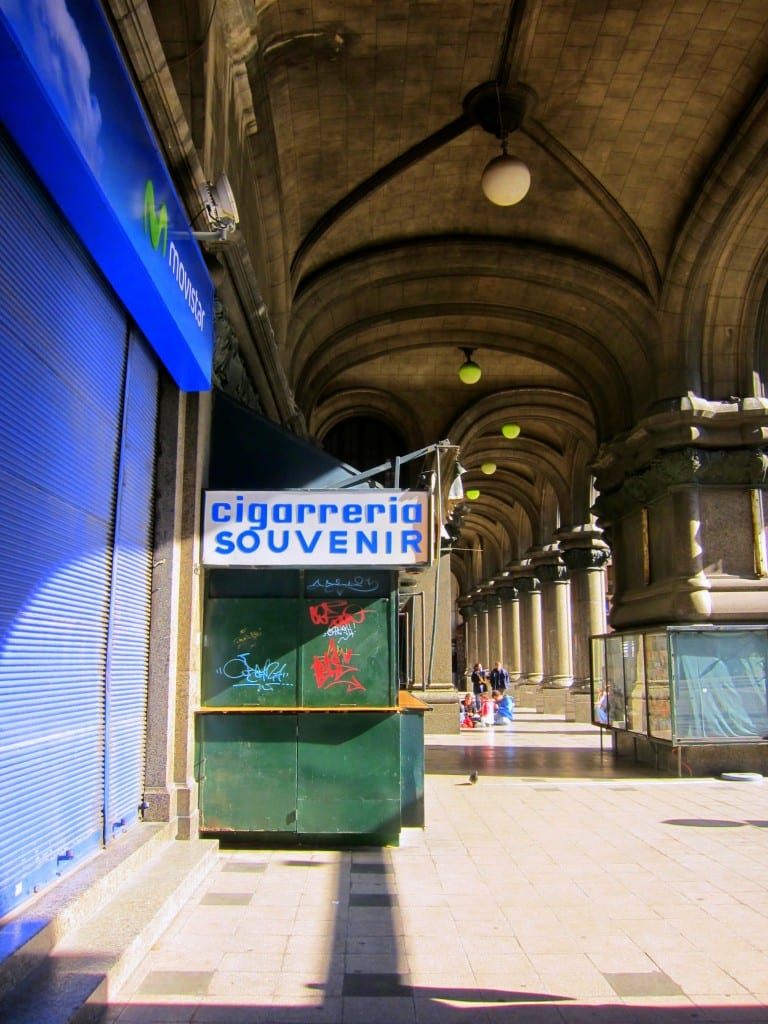 Shadows just off of Plaza Independencia. 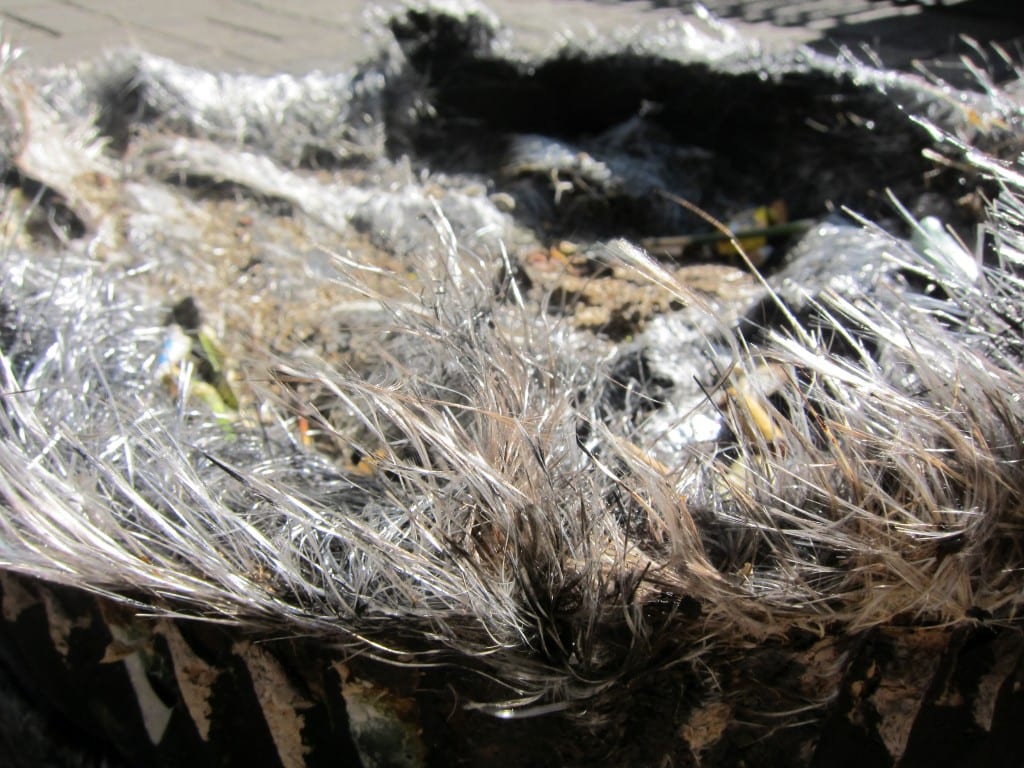 A burned down garbage pail near Plaza Independencia. 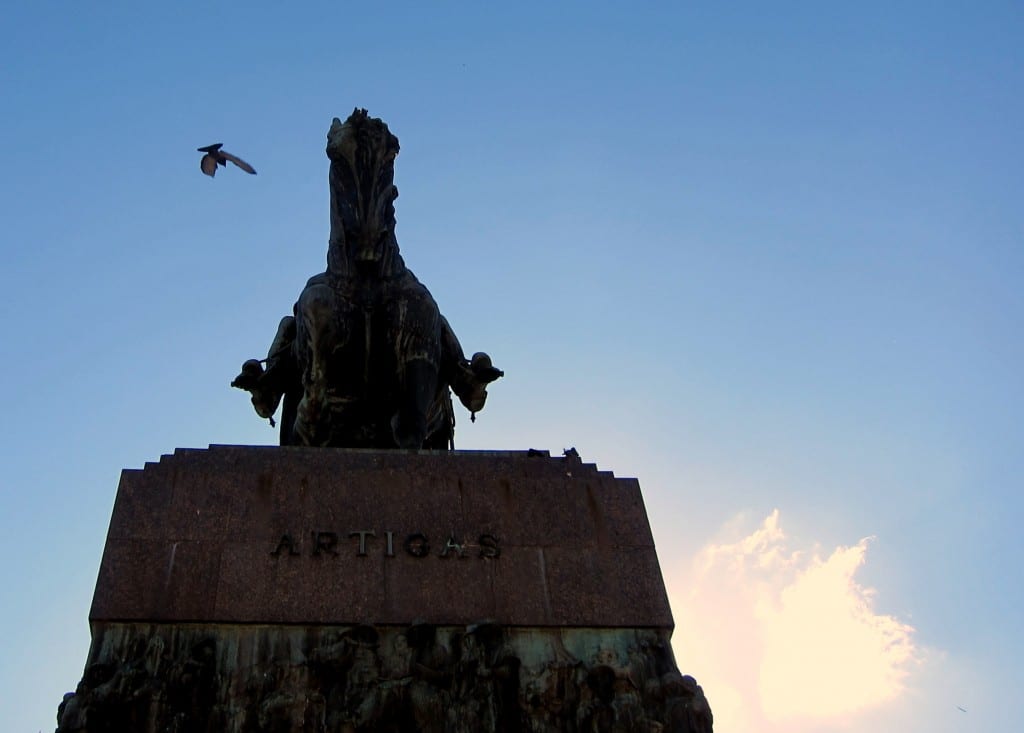 The Artigas Mausoleum is a monument to Uruguayan hero José Artigas. 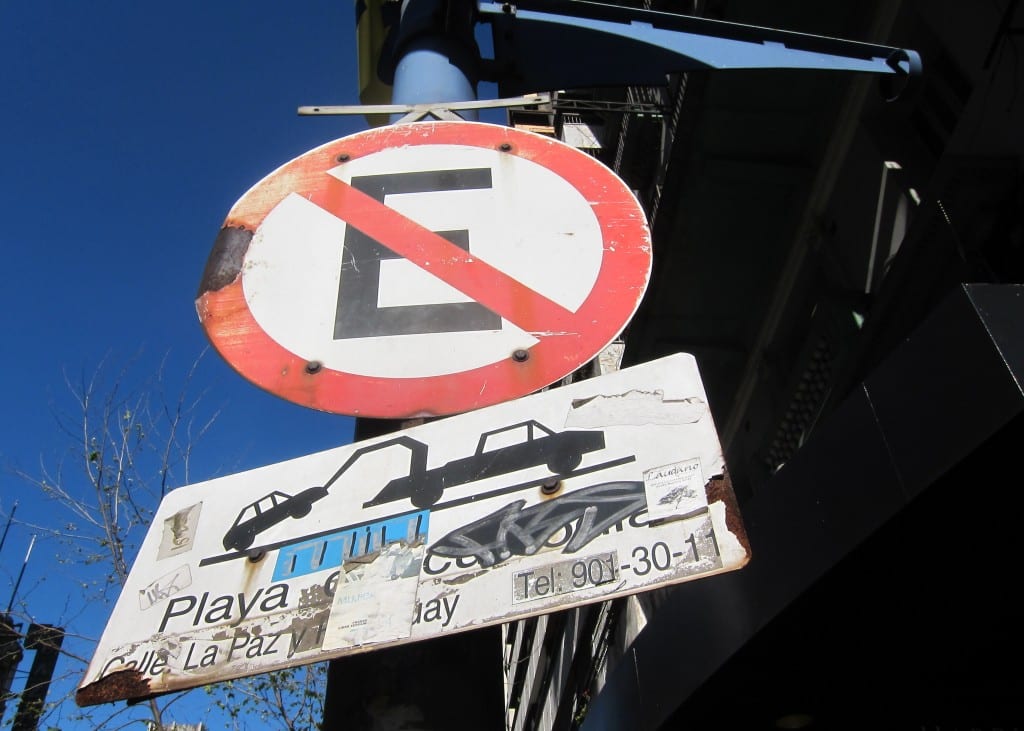 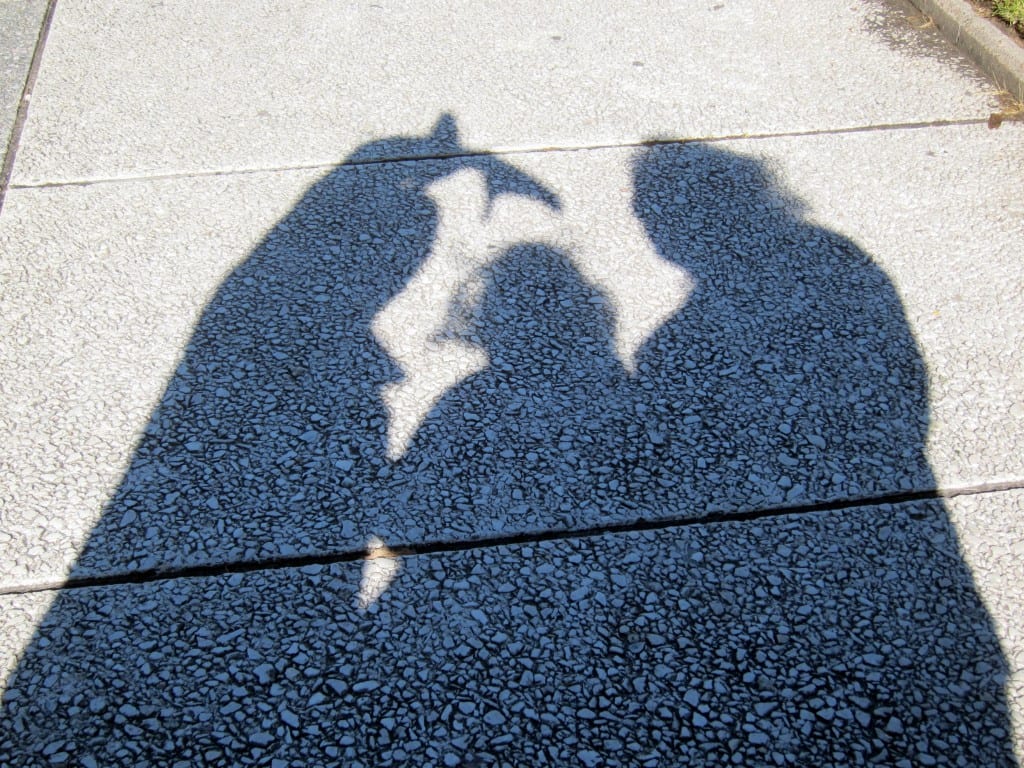 Hanging out with Wandering Trader (who is trying to pretend he’s a bird taking a crap on me) and his uncle in Montevideo. 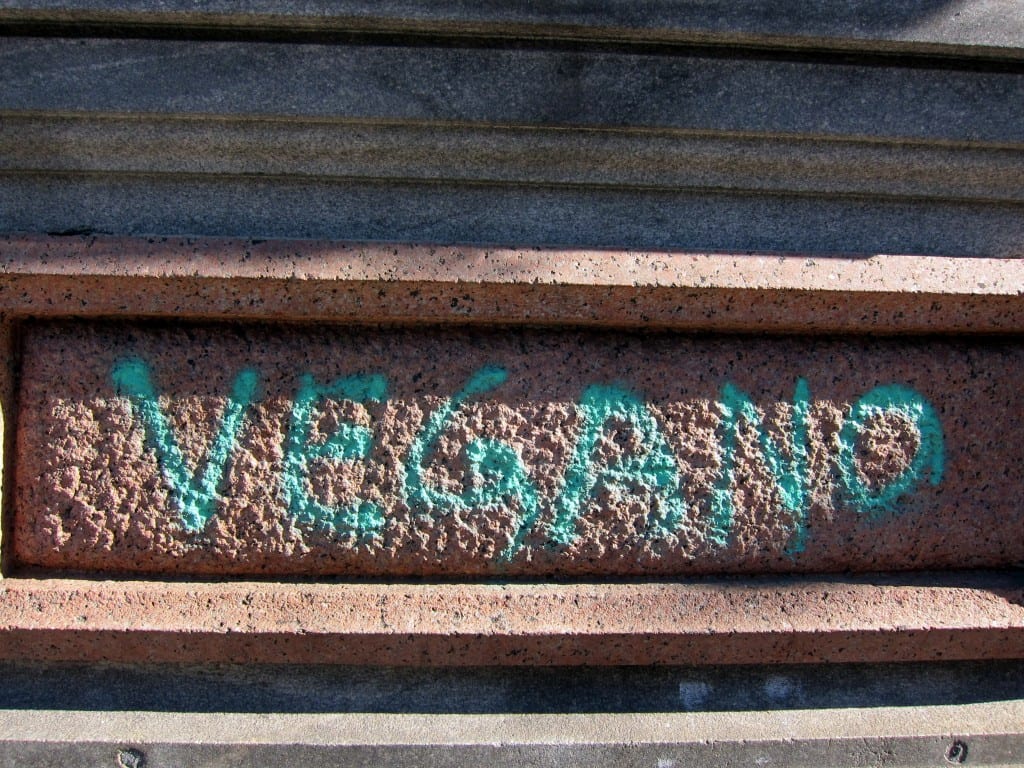 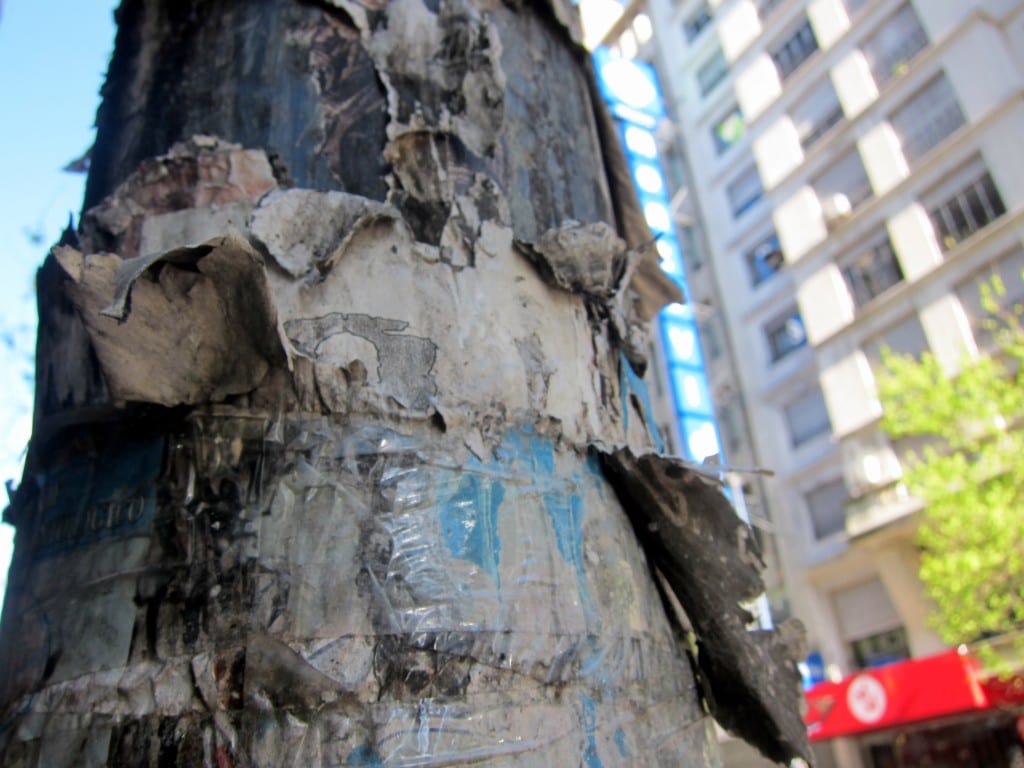 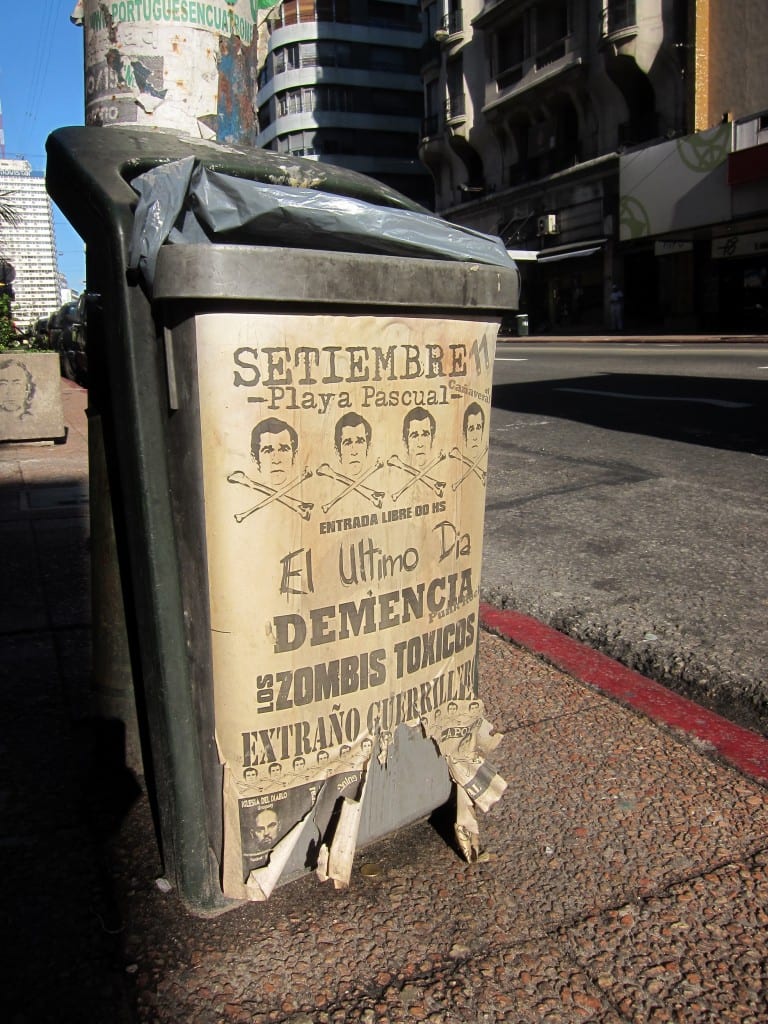 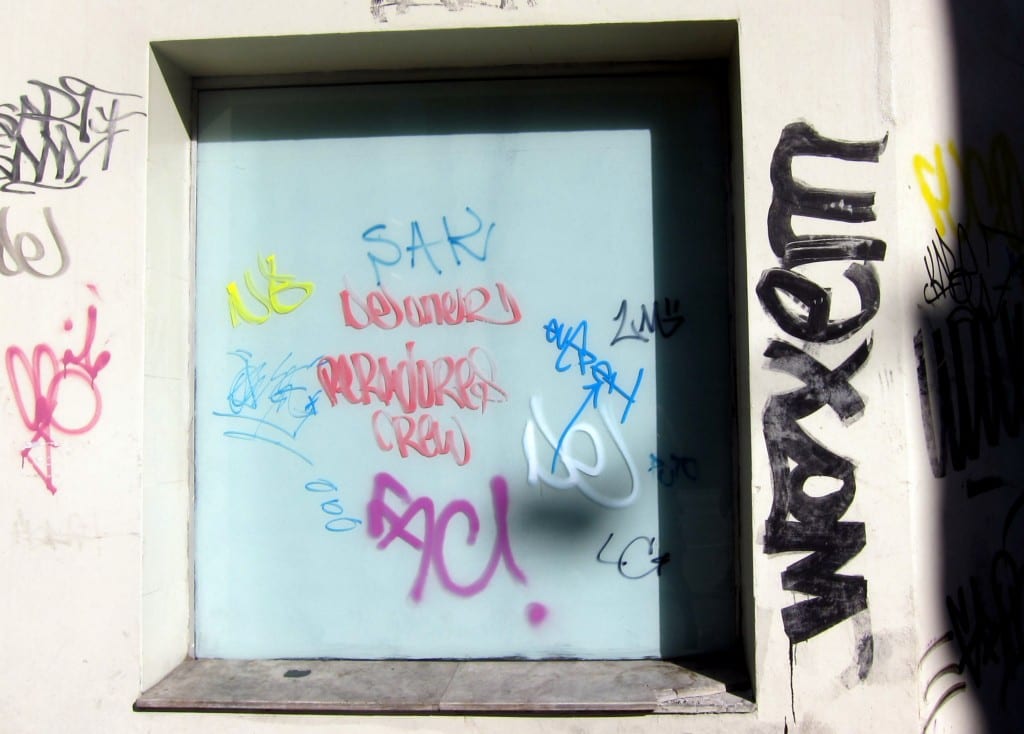 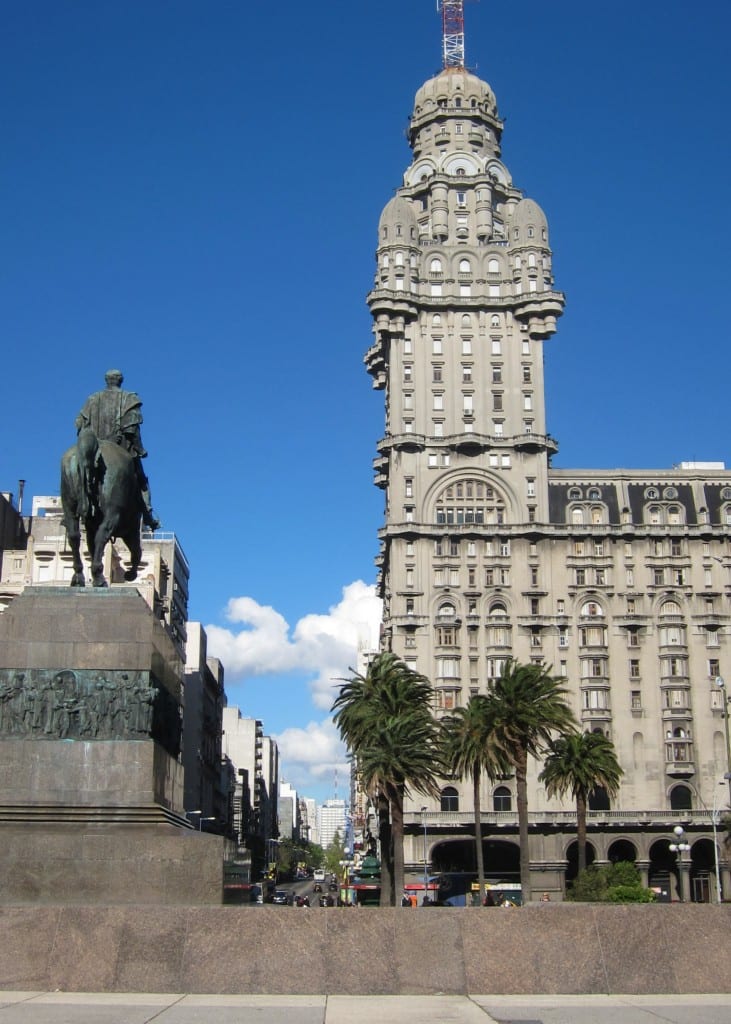 Plaza Independencia in the sun. 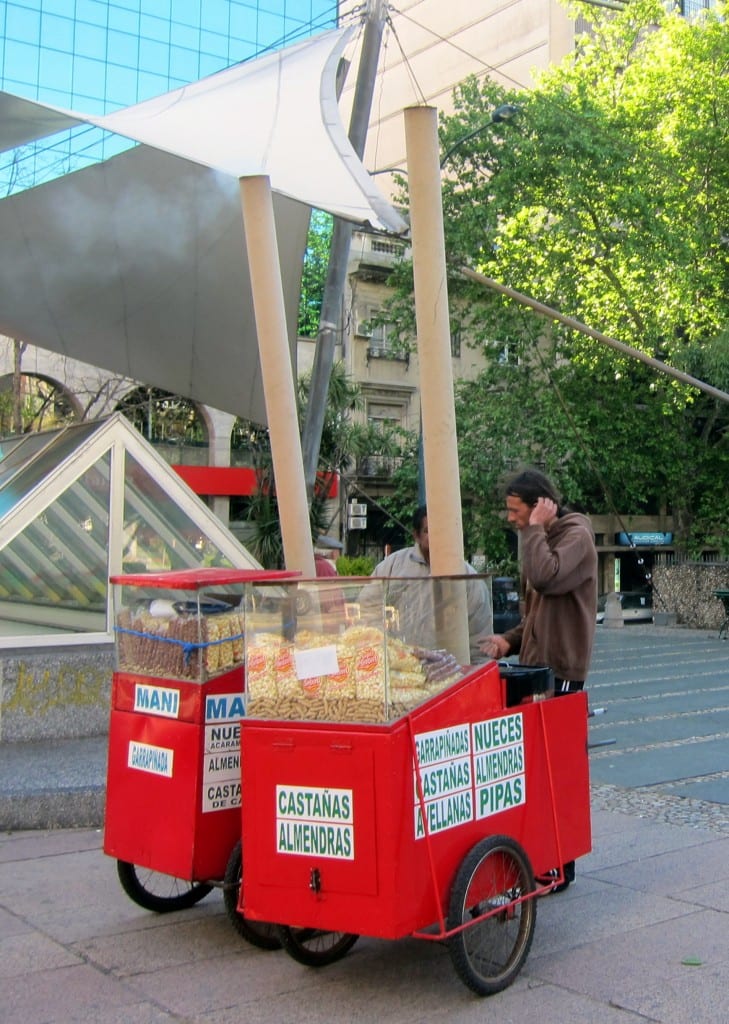 Still the same (and busier still): this tribute to eternal love, a rusted iron fence and fountain crammed with locks of young couples wanting to commemorate their affection: 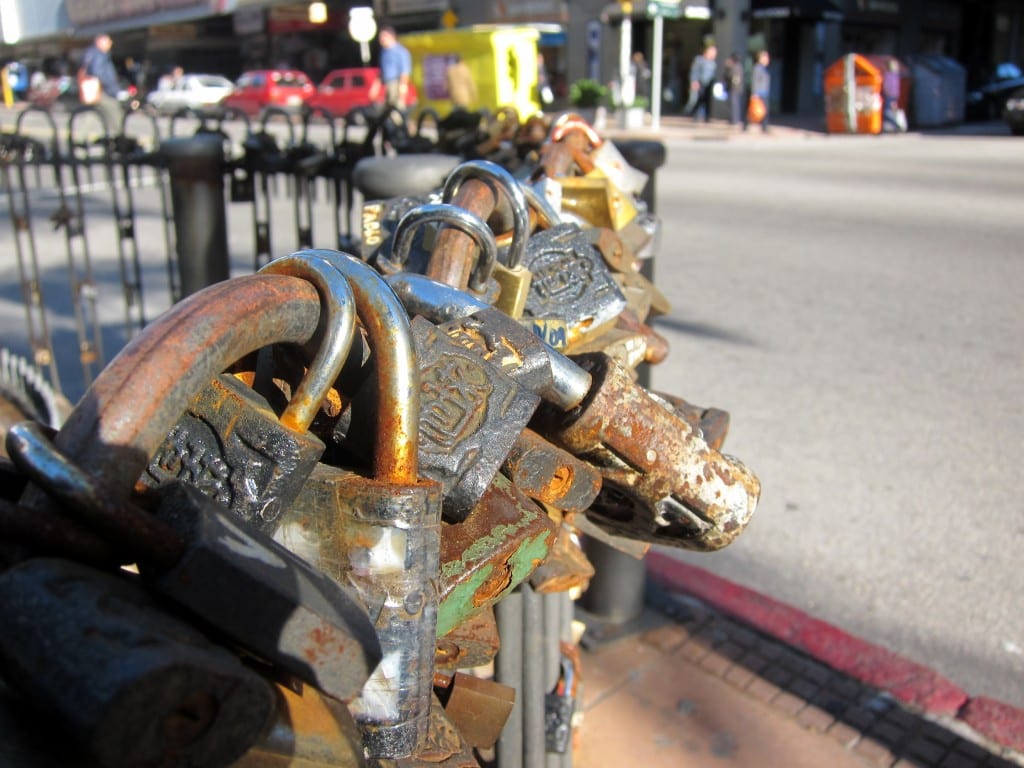 And the inscription: “The legend of this young fountain tells us that if a lock with the initials of two people in love is placed in it, they will return together to the fountain and their love will be forever locked”. 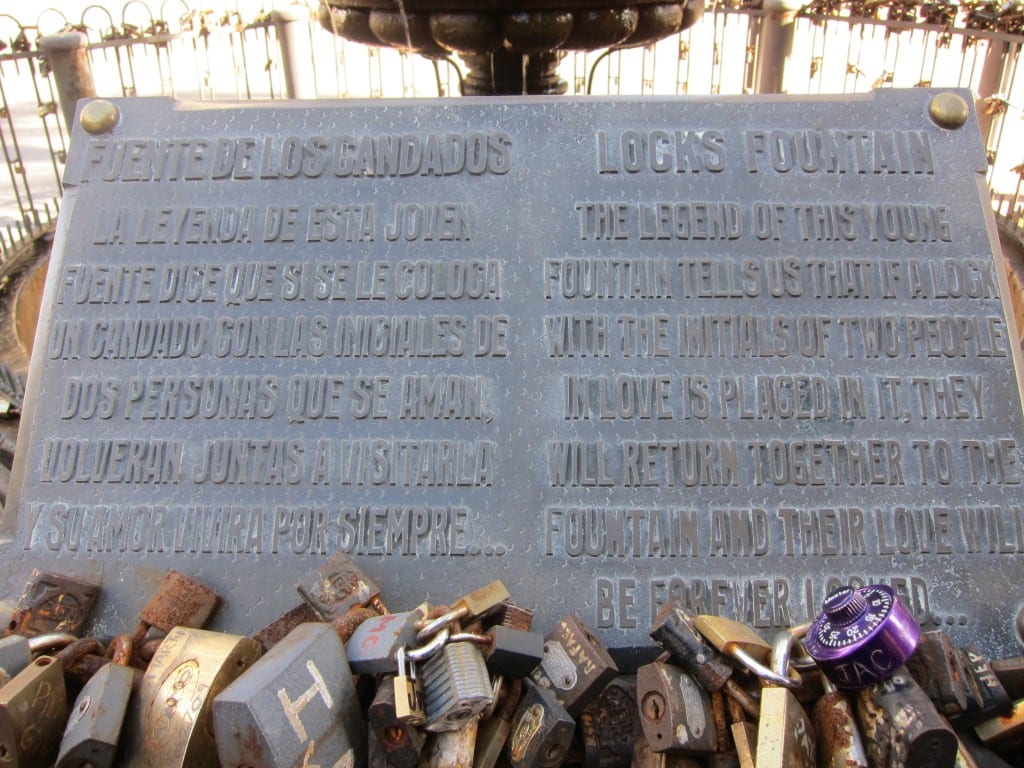 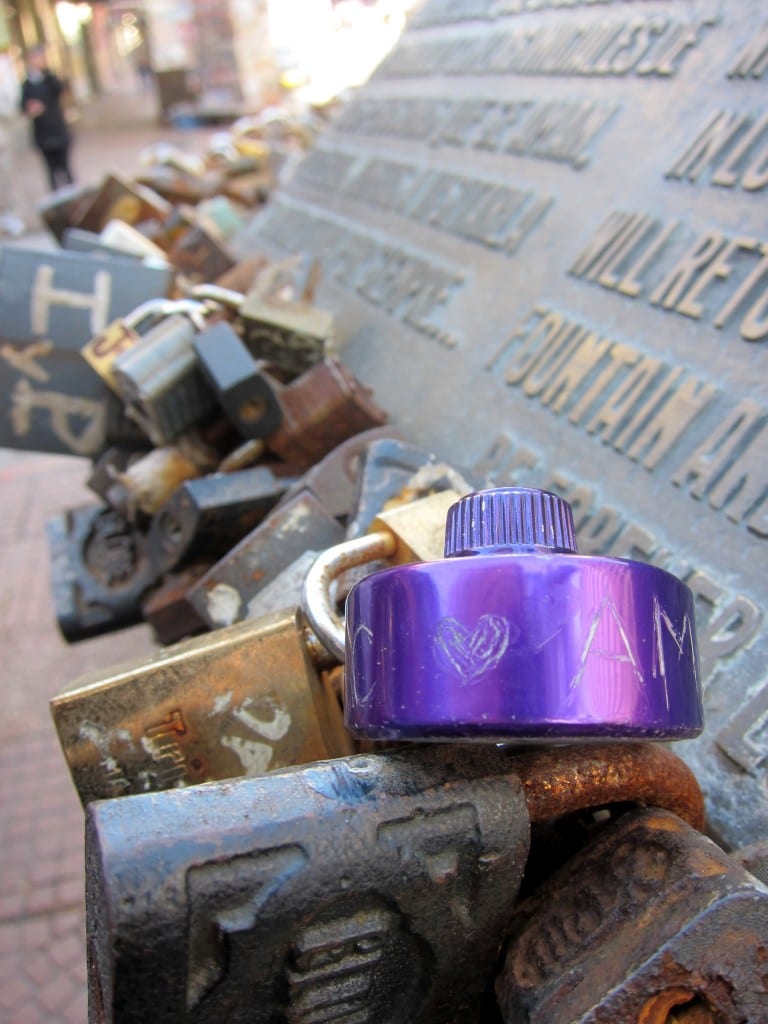 Note: for a great love story re the above purple lock, see here.

Overall, a surprise to see the city less preserved than before, but a real treat to spend time with my friends and the kids I babysat (now graduating high school!) from 2003. The hours we spent talking on a quiet Sunday afternoon, catching up on all the memories of Montevideo we shared and the many years in between, was the perfect way to end my brief time in Uruguay.

Next up: Buenos Aires and some reviews of the hotels from this whirlwind of a trip.
-Jodi