The Distrito Federal de México (DF) is a dizzying, sprawling city of choked exhaust and a patchwork of disparate neighborhoods called colonias. Because of my objectively insane meeting schedule, I was able to whizz through a good many of them. From the industrial Estado de Mexico to trendy Condessa, from residential Miramonte to the dynamic Polanco, I cross-crossed Mexico City like a harried contestant from The Amazing Race.  Except that I wasn’t terribly harried – I was actually having a good time.

This trip is the complete opposite of my usual ‘slow travel’ philosophy, and I do feel that painful ache of jealousy when I see backpackers exploring DF’s many sights. I wish I had the time to dig through the history and presence of this enormous city. But within the flurry of appointments and taxis, I’ve still been able to do the things I want to do: eat, and speak Spanish. 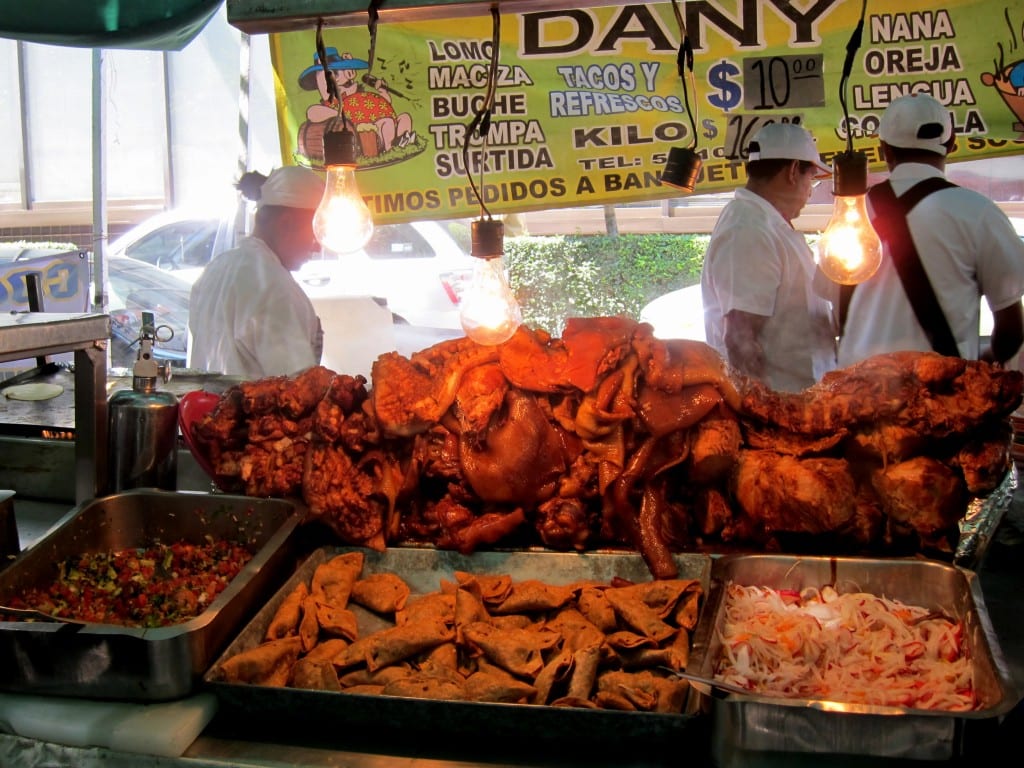 In my years away from South America, I truly missed the ability to communicate in a local language, a loss I felt most tangibly in Asia. While people were extremely friendly throughout the Philippines, Thailand and Indonesia, I longed for the intensity of interaction that I had in those early months of my travels, at the southern tip of South America. My time in Burma – already with its constant smell of curries and flowers and its friendly people – would have been that much more incredible were I able to speak Burmese. 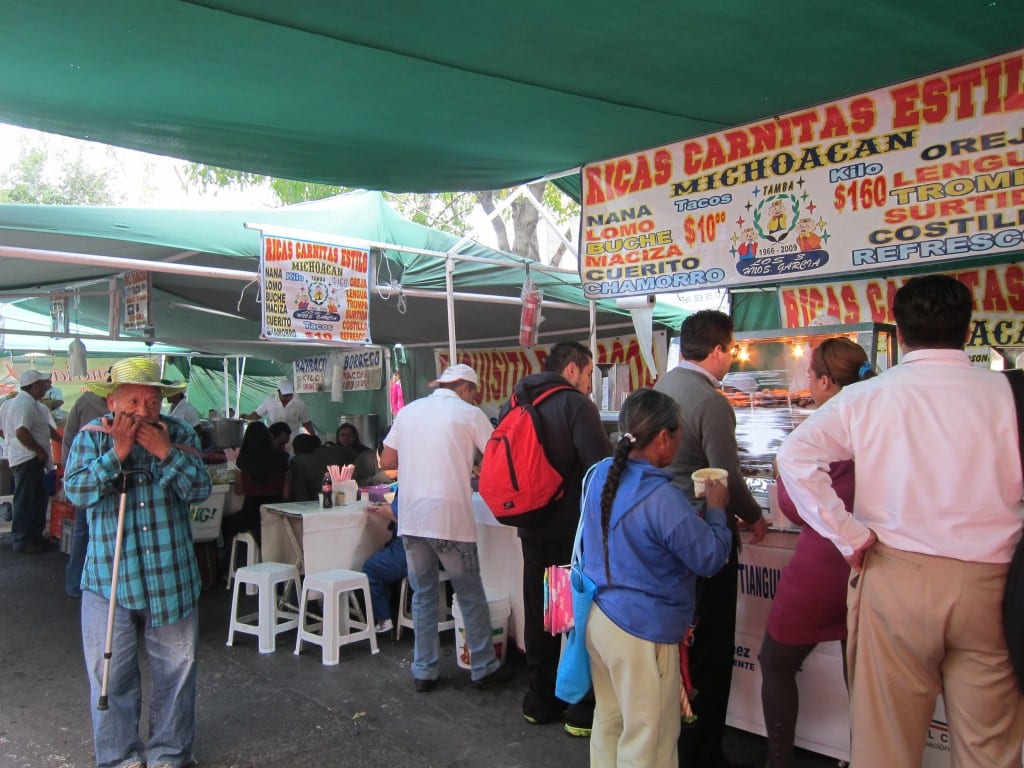 Man with his harmonica, playing for change in Polanco.

During this whirlwind stay of 2.5 days, I talked Spanish aplenty. Not only was that my job – to expound upon the many advantages of studying English at IH New York – but I was so starved for comprehension on the road that I practiced my Spanish wherever I could. I talked politics with my taxi drivers, talked finance with businessmen at a crowded street food stall in the chaos of Polanco’s busy market, swooned over sweet, creamy horchata at a corner drink stand, heaping lavish praise on its owner. And in doing so, I further entrenched an already-existing philosophy: it is unfathomable to me to live somewhere without learning the local language.

Of course, being me I also went on a bit of a street food bender. Not satisfied with a taco or two during my brief stint in DF, I managed to consume a dizzying variety of these succulent treats. The IH Mexico office rounded up their staff and brought me to El Farolito for tacos, introducing me to pollo pastor (a taco stuffed with chicken marinated in a sour but spicy rub, then grilled and topped with a slice of pineapple), chicharrónes de queso (a thin but impossibly big slice of cheese deep fried until it curls gently on itself in a tendril of crispy deliciousness) and of course the classic bifsteak con queso, a taco of marinated, tender beef topped with melted cheese. 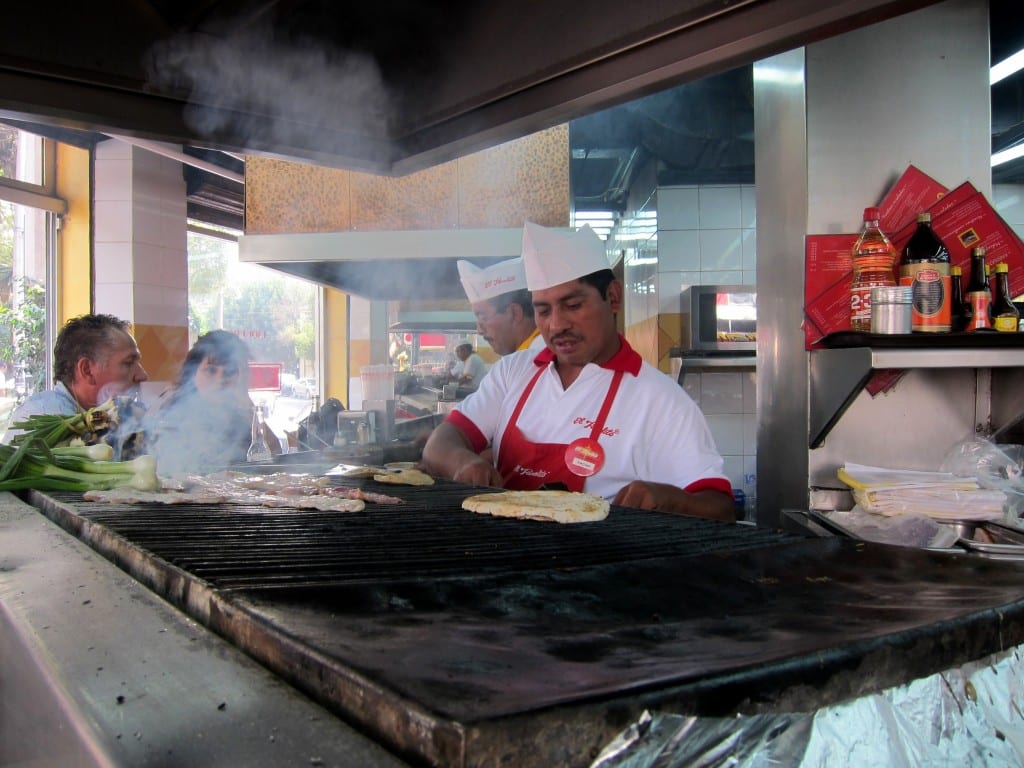 El Farolito’s tacos were the best I’ve ever had.

I might be traveling in a suit an heels, but it certainly won’t stop me from scurrying into a market and trying whatever I can get my hands on. It just means I need to actually watch how I eat – with this schedule, I’ve got no time for dry cleaning!

I’m writing this entry from Peru, having already finished my short stint in Colombia. More to come from my very fun few days in Bogota and Medellin in just a bit.